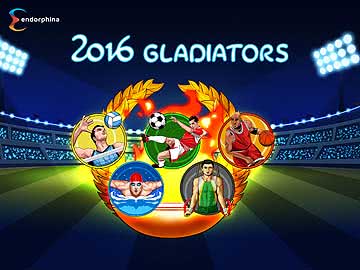 The 2016 Gladiators video slot by Endorphina is all about the summer Olympics. It uses five reels, three rows and an atypical number of paylines at 21, but something that’s really cool about this slot is that it represents a very wide range of different sporting events.

The Olympic games happen every two years with winter sports and summer sports alternating each year. The 2016 Gladiators video slot, powered by Endorphina, gives players an experience based on the summer Olympics. It uses a drawn style of graphics, which we think we done to keep all of the players neutral in terms of who they might reflect in real life or which country they might be from. In spite of this style of drawing, it looks good, and all of the symbols make complete sense with no corners cut like what you might see with games that use card rank symbols or similar.

Format and Layout of the 2016 Gladiators Slot

The layout of this game is set up to be a little different than other video slots because of some of the atypical numbers used. You still get the basic grid with five vertical reels and three horizontal rows, but other than that, you’ll have a maximum of 21 paylines, which is a very uneven number. It’s rare to have games with payline values this off of the beaten path, so to speak, but you should still resist the temptation to drop it down to 20 for a more even number since that will lower the RTP of the game as a whole. 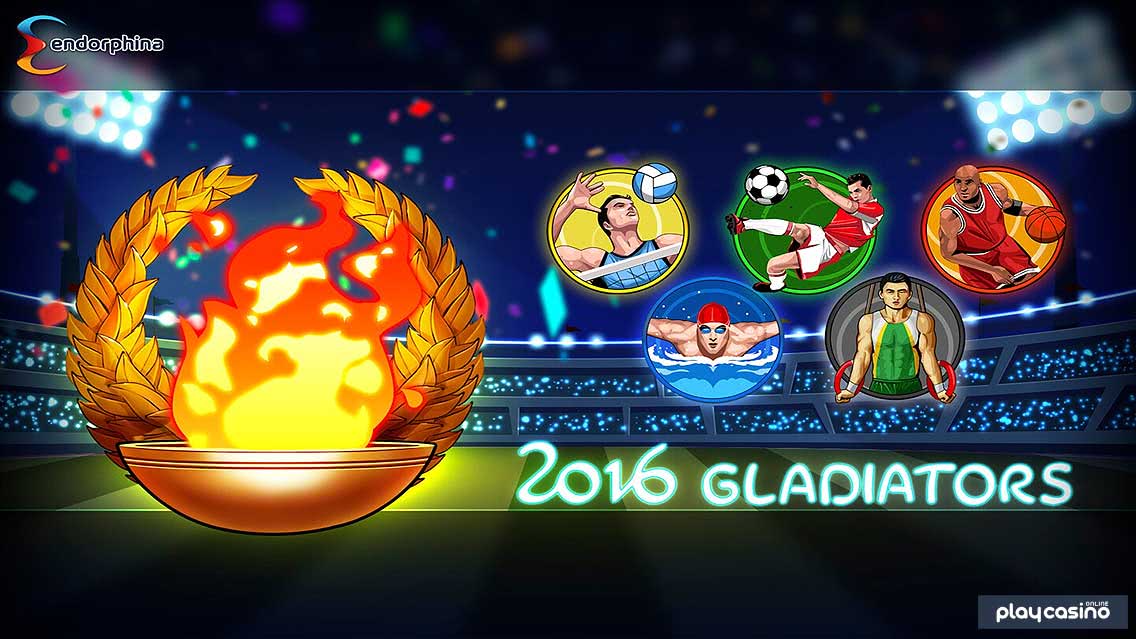 With 21 paylines, the minimum bet size ends up being $0.21 per spin with coins that are valued at $0.01 and one coin bet on each line. However, you can max things out at $210 per spin by moving the coin sizes up to the $1 level and by wagering 10 coins on each payline, both of which are their respective maximum values. The resulting range of available bet sizes is pretty substantial and makes it pretty easy to get close to the exact size of a wager per turn that you prefer. 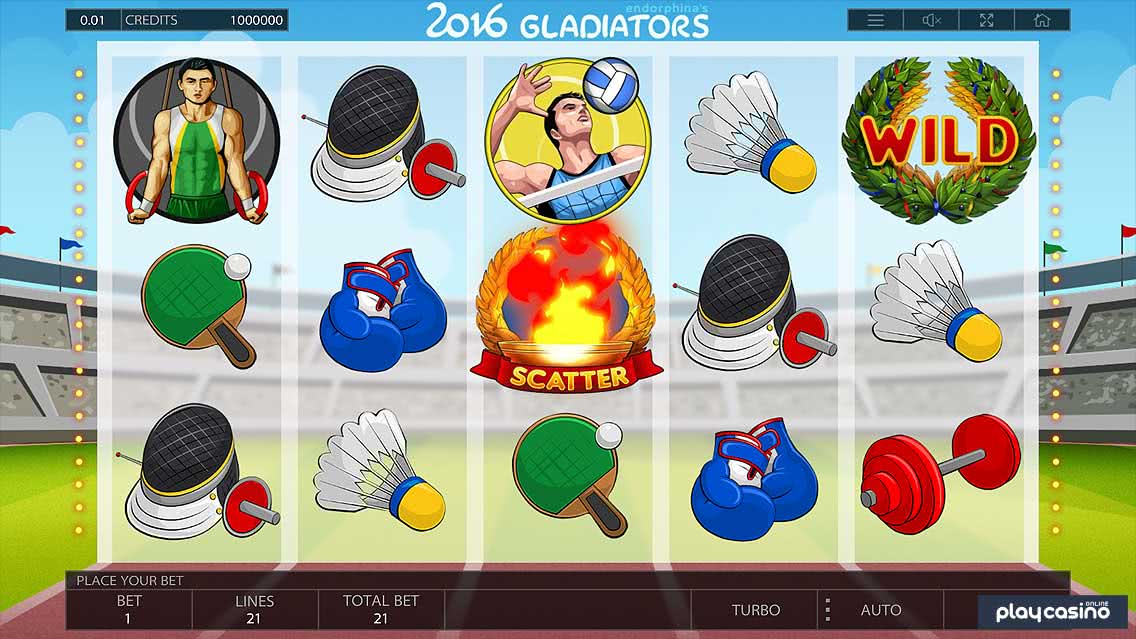 The wreath is an important symbol as a part of the Olympics, and it helps to signal the winner, particularly in team sports. In the 2016 Gladiators online slot, it’s very important as well because it’s the wild. Unlike most games, this title doesn’t have particular winning combinations for its wild, but it does substitute for everything but the scatter symbol, and that puts you in a position to get extra wins across all 21 paylines that you wouldn’t have reached otherwise. The wild also has an important place in the free spins round, which we’ll explain below.

The start of the Olympic games are signaled by the large Olympic flame, the result of a torch being ran through the area where the games are set to take place. The flame with a golden wreath around it is the scatter symbol in this game, but it doesn’t give you payouts. Instead, it’s used to trigger the free spins bonus round, which is a substantial source of value in the 2016 Gladiators video slot.

If you get three of this scatter, no matter where they show up on the grid of symbols, you’ll get 10 free spins. Four of a kind of this bonus symbol rewards you with double at a total of 20 free spins. However, five of the scatter pays out an incredible 50 free spins, which are made even more satisfying with the wild wreath feature that happens during the free spins mode. 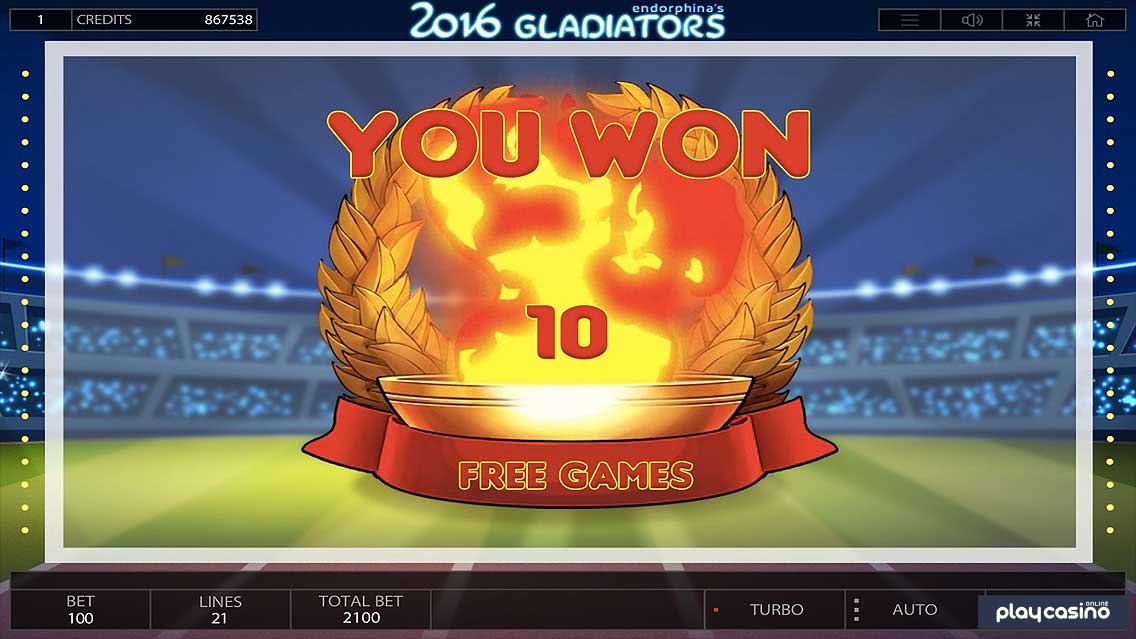 During the free spins, the five sportsman symbols will compete to see who comes out on top. This includes the soccer/football player, the baketball player, the volleyball player, the man on the rings and the swimmer. The one with the most symbols on the reels is the winner for that round, and you’ll get a wreath in place of those symbols that makes that spot wild. These wreaths can stay in place as long as another sportsman ends up in the same place, and you can earn more extra wilds in this way as the feature progresses, making it a tremendous source of value.

As if that wasn’t a great way to pay players extra value during this bonus feature, all payouts during the free spins are also hit with a 2x multiplier. That means double the prizes from what they would normally be, which also includes hitting them much more often thanks to the wild sportsman bonus feature.

The man playing soccer/football is the top-paying symbol in the game with a 3,000x jackpot payout for five of a kind. Basketball and volleyball come in at second place in a tie, and a five-of-a-kind combination of either of those will give you a 1,000x win. Finally, you can earn 500x wins for five of the man on the rings or of the man swinning on a blue background in a red cap. These are some strong but balanced wins overall.

A few different pieces of equipment from other events in the Olympic games make up the 2016 Gladiators online slot’s bottom level of symbols. You’ll get a 250x payout for five pairs of the blue boxing gloves, or you can make it 125x for five of the fencing helmets or barbells. Finally, the birdie from badminton or the paddle from ping pong will earn you a 100x payout whenever you line up five of a kind of either of those symbols. 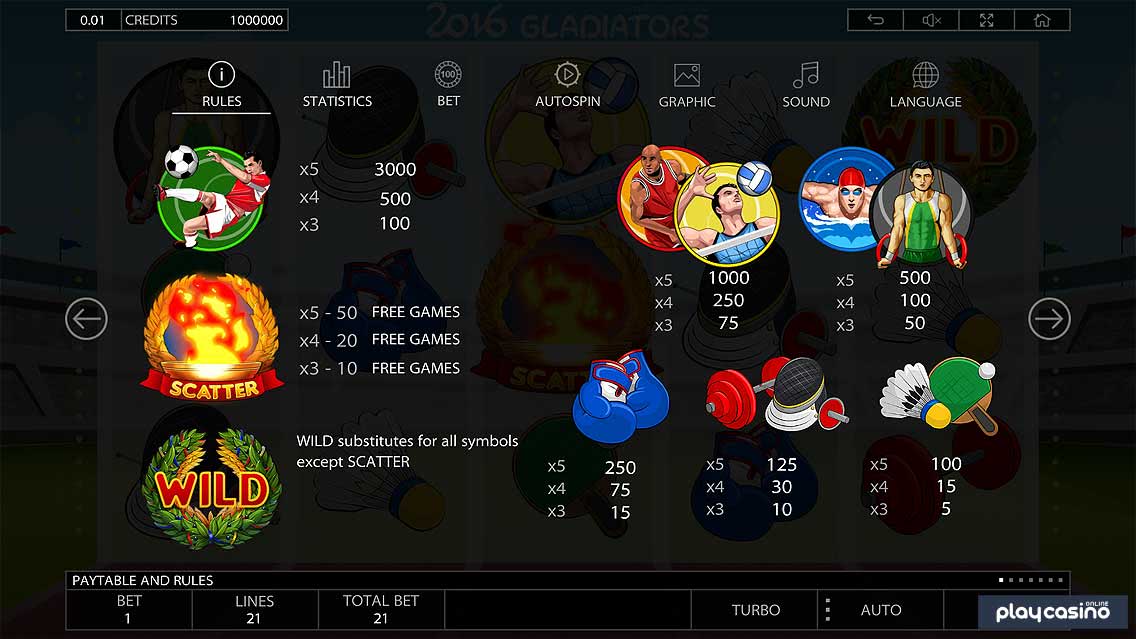 The volatility of this game is squarely at the medium level, but the thing you have to understand about the 2016 Gladiators video slot is that a ton of the total value is tied up in the bonus feature. That means that if you have a dry spell for the feature, and you haven’t hit one of the top payouts, you’ll probably have some long, slow downswings before one of those things pulls you back up.

The Olympic games are very important to a lot of people, and the summer games definitely get more attention than the winter games, so we can understand why Endorphina went with that particular set of sports. However, they also gave a lot of different sports attention in this slot, and they didn’t really show much in terms of putting one game other the other. The exception of this might be making soccer/football the top-paying symbol, but there’s no denying its popularity on a global level, so there’s not really any problem that we can see with that. Overall, the gameplay of this video slot is strong as well with a value-packed feature and a balanced pay table.