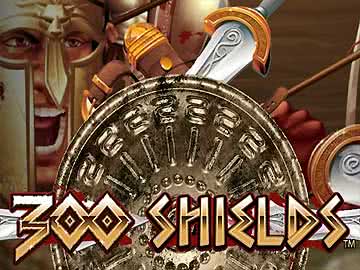 The 300 Shields slot is based on the famous battle betweeen 300 Spartan soldiers and the Persian army, and it offers a special multiplier worth up to 300x on top of other features.

In a major historical battle, 300 soldiers from Sparta took on the majority of the Persian army in a very strategic location to hold them back to give the rest of Greece time to put together an army to defend themselves against invasion. The 300 Shields video slot by the NYX Gaming Group is all about that fight and the soldiers who were in it. They’ve focused everything in this game, including the extremely valuable bonus features, around these soldiers and the famous battle they were in.

Format and Layout of the 300 Shields Slot Review

The layout of this game is extremely solid and fairly common. There are five vertical reels, three horizontal rows and a total of 25 paylines. The NYX Gaming Group likes to make betting in their games very simple, which is a breath of fresh air compared to the complications that come from the games of certain other providers. All you have to do in this game to pick your bet size is choose between a variety of coin sizes.

This is the coin size that will be wagered on all 25 paylines, and it starts with coins worth $0.01 for a $0.25 bet per spin. The coins themselves go up to the $0.50 level, so the maximum bet is $12.50 per spin. This is somewhat low for a maximum bet, and some high rollers may wish they had larger options, but the overall range is plenty for the vast majority of players.

The warrior symbol is by far the most important symbol in this game, and that makes complete sense based on the theme of the 300 Shields video slot. He’s also the wild symbol, and he shows up on all five of the reels. You can win a 1,000x payout for five of a kind, 250x for four of a kind or 25x for three of a kind. Two warriors also pays 5x, which is a reasonable win for only having to line up two symbols.

This wild warrior symbol substitutes for everything but the scattered shield symbol, but it’s also a key component of the main bonus feature in the game as well.

The shield is such an important symbol in the story that the 300 Shields online slot is based around because it was such a critical part of the phalanx strategy that was used. Each soldier’s shield would protect himself and part of the soldier beside of him, so it was extremely difficult for the opposing army to land any type of blow whatsoever. This excessively defensive strategy would frustrate enemies, leaving them prone to mistakes, which the exceptionally trained Spartan soldiers would then take advantage of.

Five of the shield scatter symbol gets you a win worth 100 times your total bet, which is like a 2,500x line bet prize. Four pays 12x, three gets you 5x and two of a kind of this symbol earns a win worth 2x. This symbol pays no matter where it lines up on the reels, and they don’t have to be on consecutive reels in either direction to give you a payout. They are also an extremely important part of the bonus feature.

The NYX Gaming Group did an excellent job with the bonus feature in the 300 Shields video slot. It’s based on free spins, which is normal enough, but they have handled it in such an innovative way that it’s the main reason this game has stayed extremely popular among players for such a long time. You trigger this bonus feature initially by getting at least three shields anywhere on the reels.

Other Symbols and Payouts

Players will find ten other symbols on the reels that give payouts. The archer and the ship pay 250x when you line up five on a payline, and both of these symbols pay for two of a kind or more as well. The sword and the arrow symbols get you 200x for five-of-a-kind combinations as well, but you need at least three for a payout.

Next up are the card rank symbols. The purple A and red K get 150x for five, and the orange Q and blue J are worth 125x for five of a kind. Finally, five of the yellow 10 or green 9 symbols will get you 100x. All six of these symbols have arrows sticking out of them, and the significance of that is that a large portion of the Persian army consisted of archers, of which the 300 Spartans had few, if any, and they had to use their shield-based strategy to protect themselves. It was extremely effective and forced the Persians to proceed forward to challenge them hand-to-hand.

The main thing about the 300 Shields online slot that has attracted players for so long is the bonus feature. The cooperation between the wild warrior symbol and the scattered shield symbol is very important, and it creates a type of in-depth gameplay that you don’t normally find in video slots. The NYX Gaming Group did a tremendous job with this title, and it’s carried a high level of popularity despite its less-than-stellar graphics because of its extremely immersive gameplay. This is one of their oldest titles, but it’s held up over time because of the gameplay values and because of the popularity of the story that the game is based on.