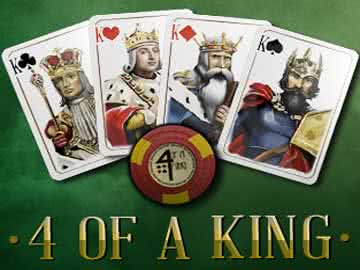 The 4 of a King online slot is based on a casino theme, and you’ll have a lot to look forward to with a strategic risk game and an expanding wild that covers an entire three-by-three section of symbols in this game.

Most online slots out there have different themes that take you away from the casino mentally and put you in a different place. Endorphina did something a bit different, and perhaps anti-intuitive, with their 4 of a King video slot. In this title, it’s all about the actual casino games themselves, and you’ll see a number of things like roulette wheels, casino chips, playing cards, dealers and more on the reels. This title also has a drawn style of graphics that looks like something out of the 1940s or 1950s, so it has a bit of a throwback element to it as well. With a pretty low volatility and gameplay based on some simple but effective features, this is a perfect title for players who like to relax while they play without so many bells and whistles going off all of the time.

Play 4 of a King Slot for Free

Format and Layout of the 4 of a King Slot

The layout for this game allows for some pretty small bet sizes, which makes it particularly inclusive for those at all levels of stakes. There are five vertical reels, which is what you would expect from a video slot, but there are also three horizontal rows and 10 total paylines. Something interesting to note is that this game pays both left-to-right and right-to-left, and that is a part of how this title keeps the hit-rate high and the volatility low. 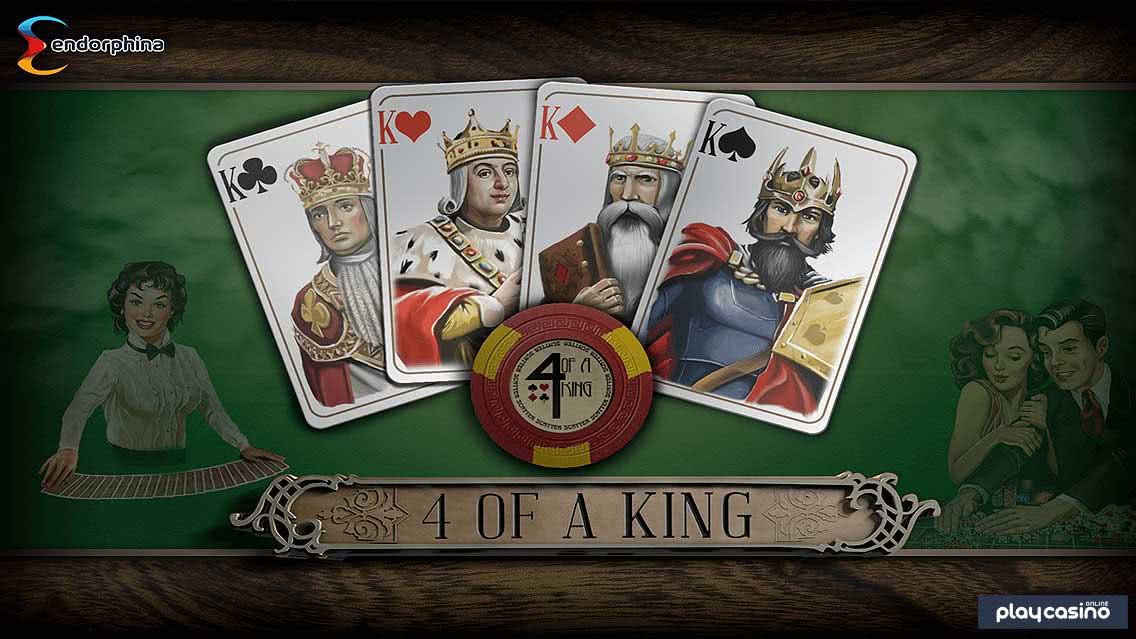 Betting starts at the $0.10 level with $0.01 coins on each payline. You can make it $100 with 10 coins on each payline and $1 coin values. You do have the option to drop down the number of paylines below 10, but doing so will lower your RTP, which means a worse chance of winning over time. Maximizing your RTP percentage is what this game is all about from a strategic standpoint, so you’ll really need to keep the number of paylines at 10 to make that happen. With a minimum bet size of $0.10, there’s not really much of a reason to drop it down below that anyway. 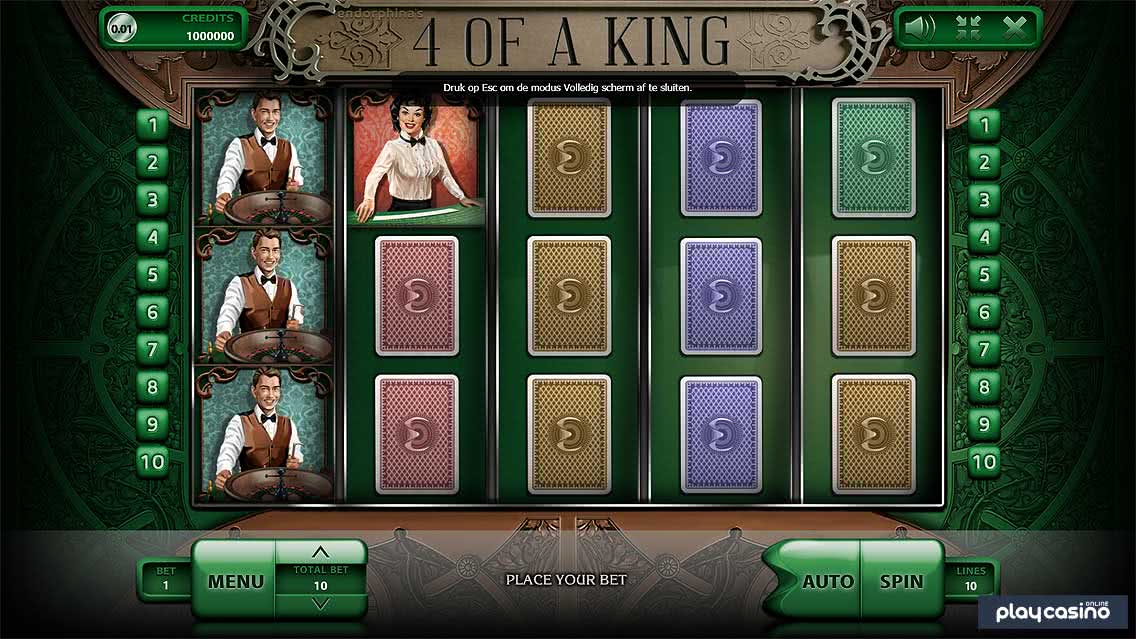 A key component of the 4 of a King online slot is that every aspect of its format and gameplay is set up to have a very high hit-rate, a pretty low volatility and to center around a particular style of play. One aspect of this is that all of the symbols always show up stacked. This makes it more likely that you’ll receive multi-line payouts on individual spins, and that affects the gameplay as noted above. Moreover, you’ll have more chances to win since the game pays in both directions as well. Combine these elements with the super expanding wild symbol that we’ll describe below, and you can see how everything comes together to really cater to players who prefer this type of gameplay.

There’s one casino chip symbol in the 4 of a King video slot, and it has the logo of the game on the center of it. This is the wild symbol, and it substitutes for all other symbols in the entire game. However, it also has a special feature attached to it. Whenever it shows up, it will expand to cover every spot adjacent to it in any direction. This includes horizontally, both left and right, vertically, both up and down, and diagonally in all four directions. As a result, you can get up to nine spots wild each time that this super expanding wild casino chip symbol shows up on the game board. That obviously plays into the gameplay factors that we have noted above and shows that a wild feature doesn’t have to be complicated to fit into the style of play in a major way. 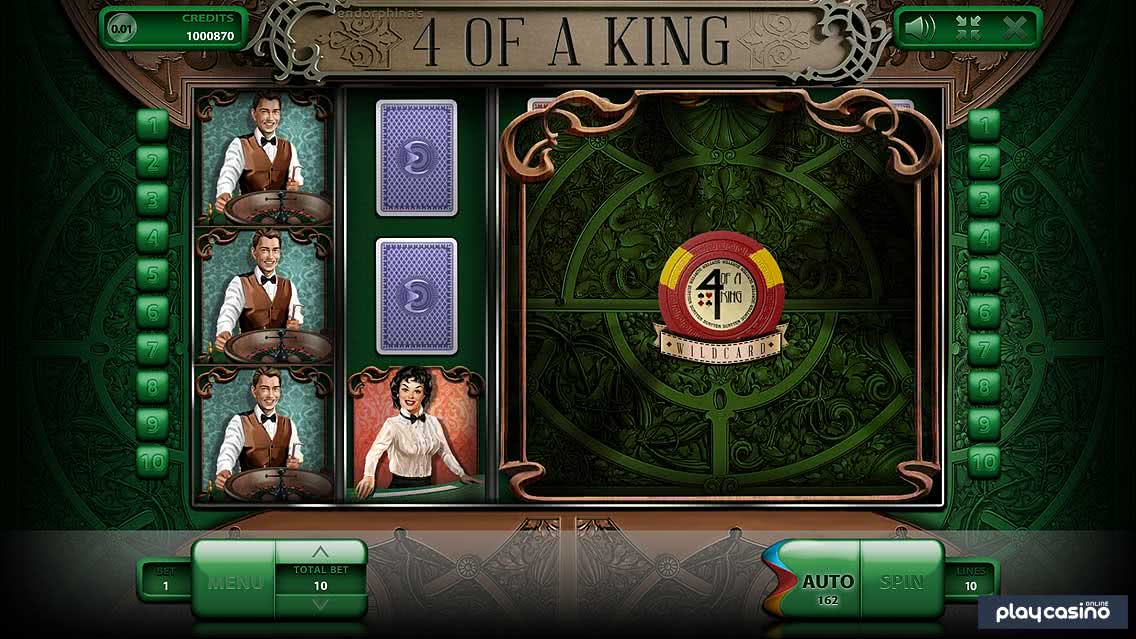 Most slots with a gamble side game are set up so that it’s not an important part of the experience. In this game, things are a bit different, and you’ll actually need to interact with it and play it sometimes in order to get the best return to player percentage that you can. It’s set up differently than most slots, so understanding the format is the key to understanding how to take full advantage of it.

After any win, you’ll be given the option to take the win or take a risk. You should always take the risk. Here’s why: You don’t actually have to play the risk game after you press the button for taking the risk. Instead, you’ll be shown a card face-up and four face-down cards. The idea is to choose from those in a way that gives a card bigger than the one shown face-up. However, it’s not that simple since you can leave the risk game without actually playing. 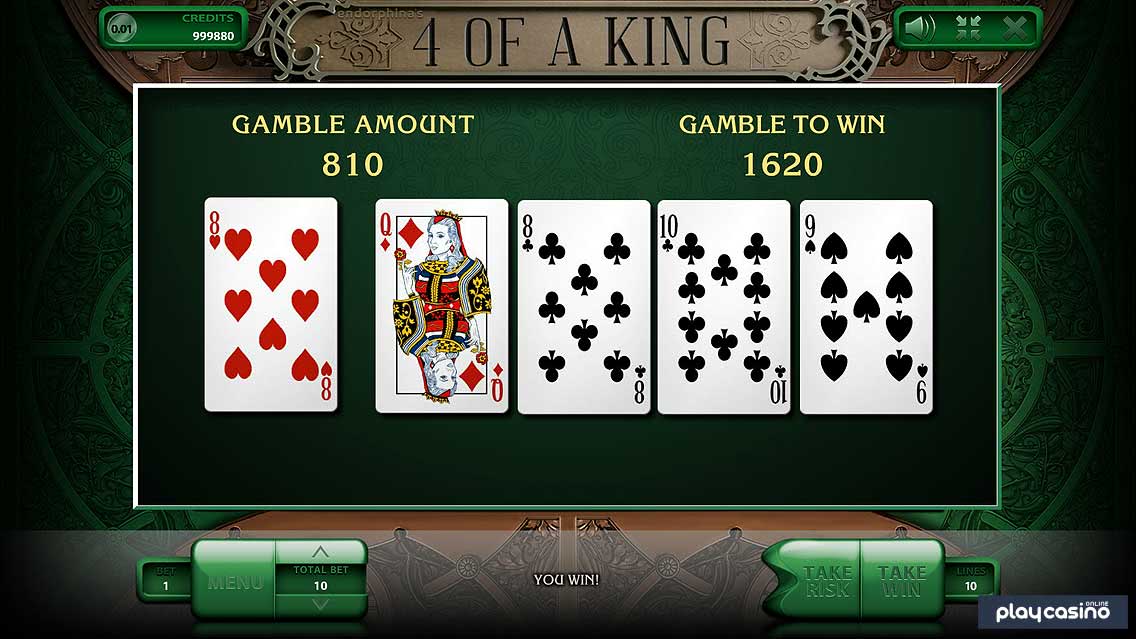 This gives players a chance for a strategic decision based on whether to play the risk game or not once they have seen the upward-facing card. With the way the odds work out for this game, you should always choose a card when there is a two, three, four or five showing. Along similar lines, there is a disadvantage for players if a nine through ace is showing, so you should never play when facing those cards. For a six, seven or eight, it doesn’t matter what you do because it’s set up to be an even money wager.

There are only seven paying symbols in the 4 of a King online slot. This is another factor that increases the hit-rate and makes it easier to get winning combinations. The couple with a big pile of chips on the table in front of them is the highest-paying symbol in the whole game, however, and that comes out at 1,000x for five of a kind. That’s a pretty reasonable top jackpot for a game that has such a low volatility.

Four different playing cards with different colors make up the rest of the pay table. Five of the red or yellow gets you 200x, and five of the green or blue is worth 100x. 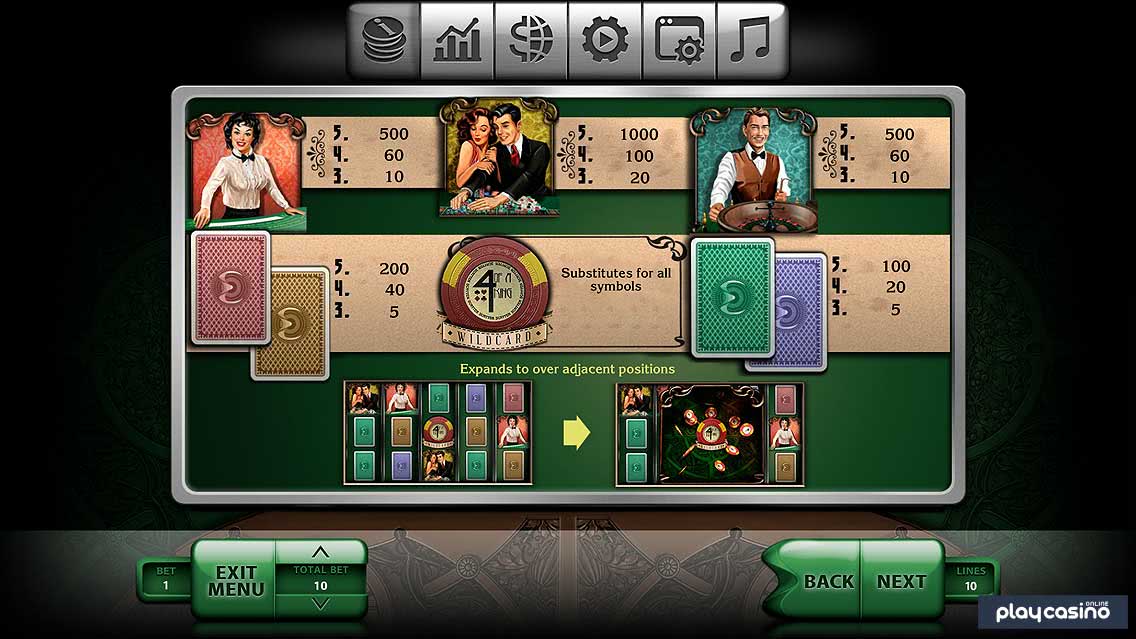 The 4 of a King video slot is a fun, low-volatility title with an exciting expanding wild feature and a high hit-rate overall.