A Night in Paris Slot Review 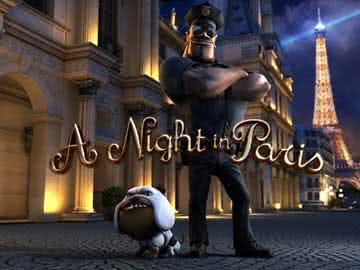 Paris, France, is known for a lot of things, and the A Night in Paris online slot by BetSoft captures many of these with 30 paylines of cops and robbers action with a bit of a romantic side of the city caught up in the background.

BetSoft’s A Night in Paris video slot is all about Paris, France, and it showcases a few popular things that this city is known for. The main part of the theme has to do with a cops and robbers theme between a large cop and a small, sneaky thief who is trying to steal art from a museum. The bonus features in this game tie into this aspect of the game’s motif, and it puts players in a position to win in several different ways, including a progressive jackpot. With a reasonably high hit-rate and a balanced set of features, the volatility for this title comes in at a solid medium level.

Play A Night in Paris Slot for Free

Format and Layout of the A Night in Paris Slot

Players who like familiar formats will be at peace with the 30-payline layout that you’ll have with this game. Five reels and three rows give the typical play area for video slots, but there’s a little more than meets the eye here, especially since most of the symbols in the game pay for just two of a kind or more. With the way the volatility is set up, you’ll have some large top prizes balanced out by the regular pay table, and that creates an exciting style of play. 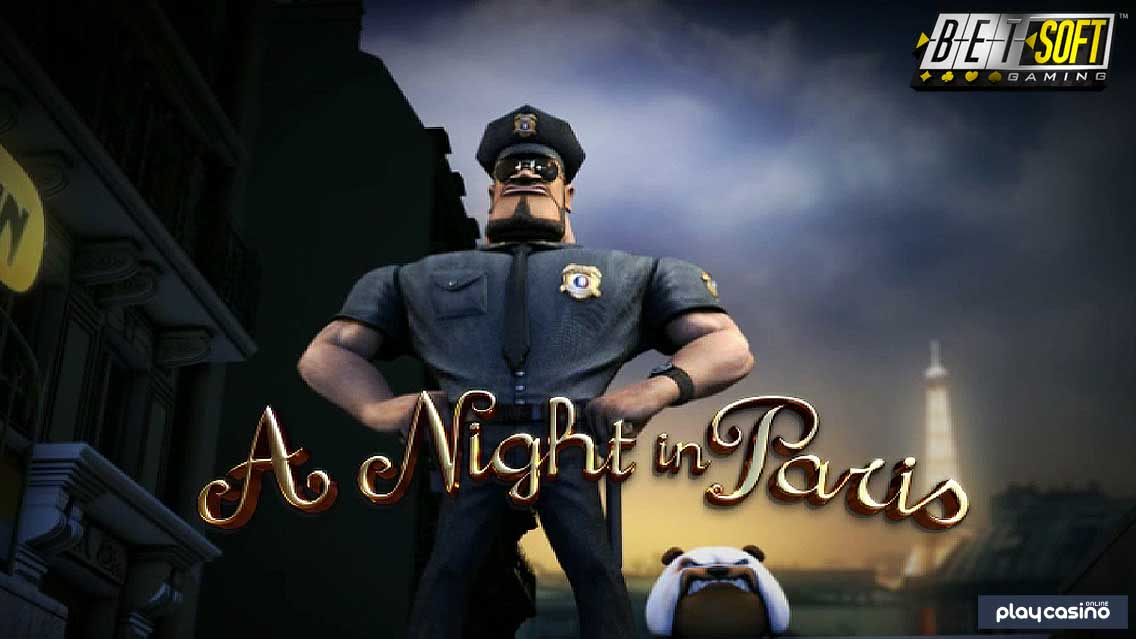 For the betting, you’ll be able to score with a minimum wager size of $0.30 with $0.01 coins on each payline. However, to qualify for the jackpot, you’ll have to have five coins on each line, and that means a minimum bet size of $1.50 to qualify. The maximum bet overall is $150 per turn, and you get that by using $1 coin sizes and putting five coins on each of the paylines. This is a pretty significant range of pays, but you’ll probably want to make sure you qualify for the jackpot if you can because of the increased value that comes along with it. 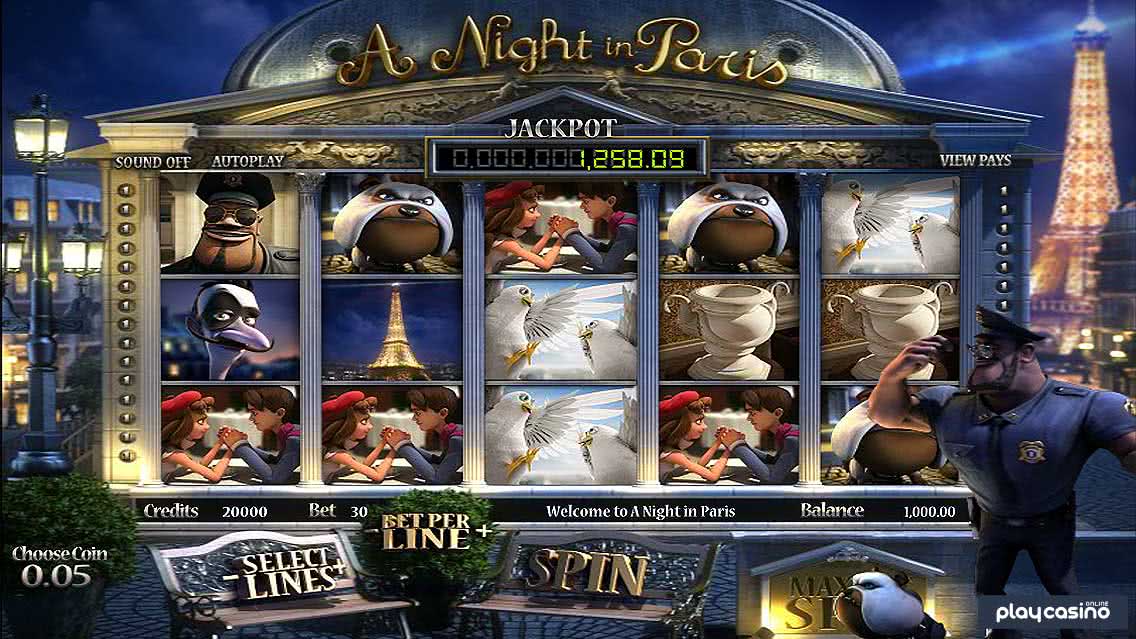 There are three important symbols that can give you an instant win. If you get the robber, the badge and the cop, in that order (or the exact reverse order), then you’ll see a scene play out where the cop catches the robber. As a result, you’ll get an instant win right away. What you need to know about this feature is that it’s designed to give you multiples of your entire bet. As a result, you’re going to get bigger prizes from it whenever you wager more, and that helps to keep the payouts fair. 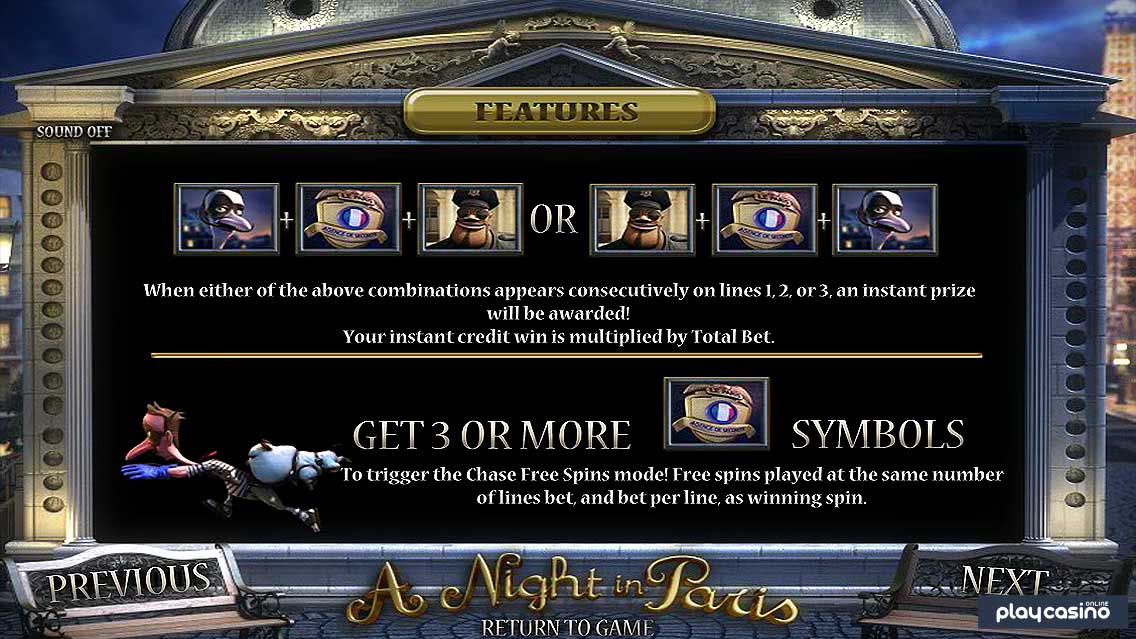 The A Night in Paris online slot also has a free spins feature. You trigger it by getting three or more of the scattered badge symbols anywhere on the game board. During this feature, you’ll have plenty of free opportunities to get wins, and this takes place in the chase portion of the typical cops and robber story, which is often the most exciting part. 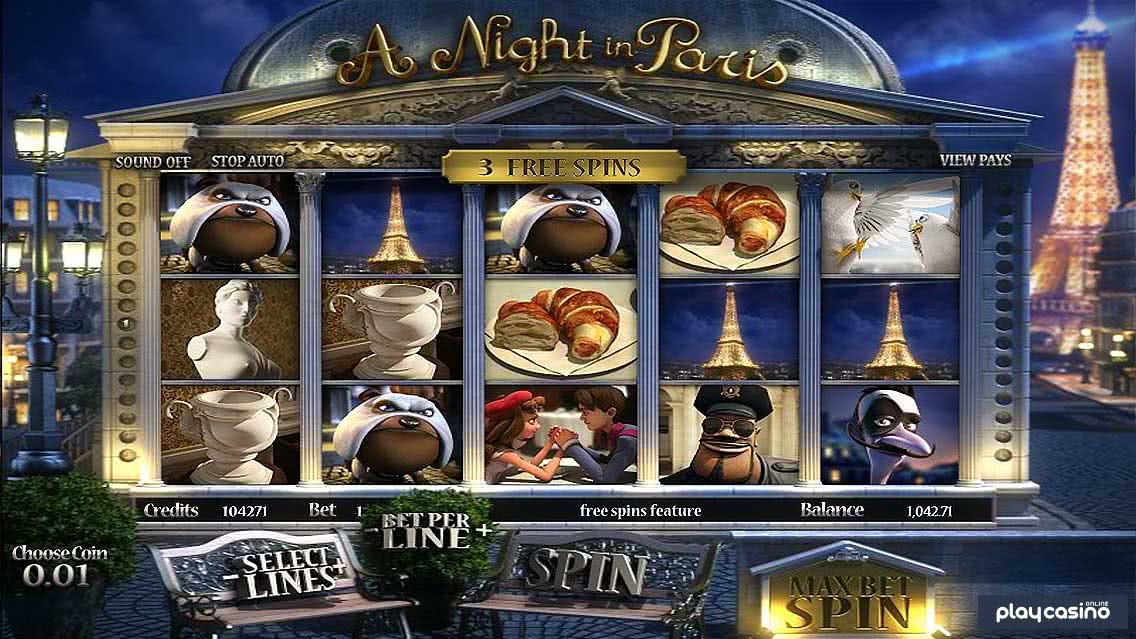 Caught in the Museum Bonus Feature

The thief is trying to steal some things from the museum, and the cop is after him. When you have at least three of the painting symbol show up, you’ll be taken to the Caught in the Museum feature. The way this feature plays out is that the thief is in the museum, and you’re trying to help the cop find him by looking behind various pieces of art. You can get instant wins in this game as well, and the better your picks, the more money you’ll pick up.

We really like how these bonus features, all three of them, play into the theme of the game. It’s an important piece of the overall gameplay experience here, and it’s the type of thing that makes you want to keep coming back for more over and over again. 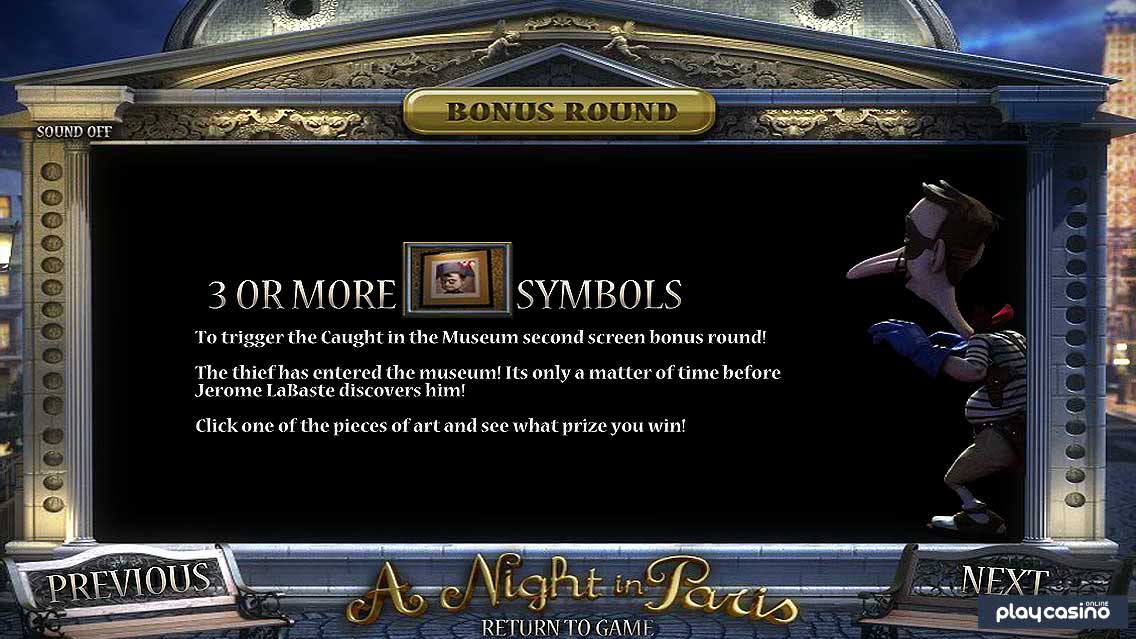 In the A Night in Paris online slot, the top symbols all pay for just two of a kind or more. This is a very important aspect of the game because of how it affects the hit-rate and the payout distribution. Everything on the regular pay table is about getting paid often with small and medium wins. However, the progressive jackpot and bonus features offer ways to win even more, so there’s a fun balance between the two extremes there.

The cop is the top symbol, and five of a kind awards you with 500x. The thief comes in next, and five of him on an activated payline is worth 300x. The cop’s dog will earn 250x for five, and five of the couple holding hands is worth 200x. The white dove symbols get you 150x, and that wraps things up for the highest level pays.

All five of the low-tier symbols will get you payouts for three of a kind or more on an activated payline. You can make it 125x for five of the white chalice, and it’s 100x for five of the tower. The statue bust is worth 75x, and it looks like something that would be in a museum. Finally, the bread on a plate gets you 50x when you line up five matching symbols on the same payline. Overall, the pay table as a whole is balanced from top to bottom, and even though some of the lower wins are pretty small, the vast majority of the pays are pretty substantial considering where they stand in relation to each other. 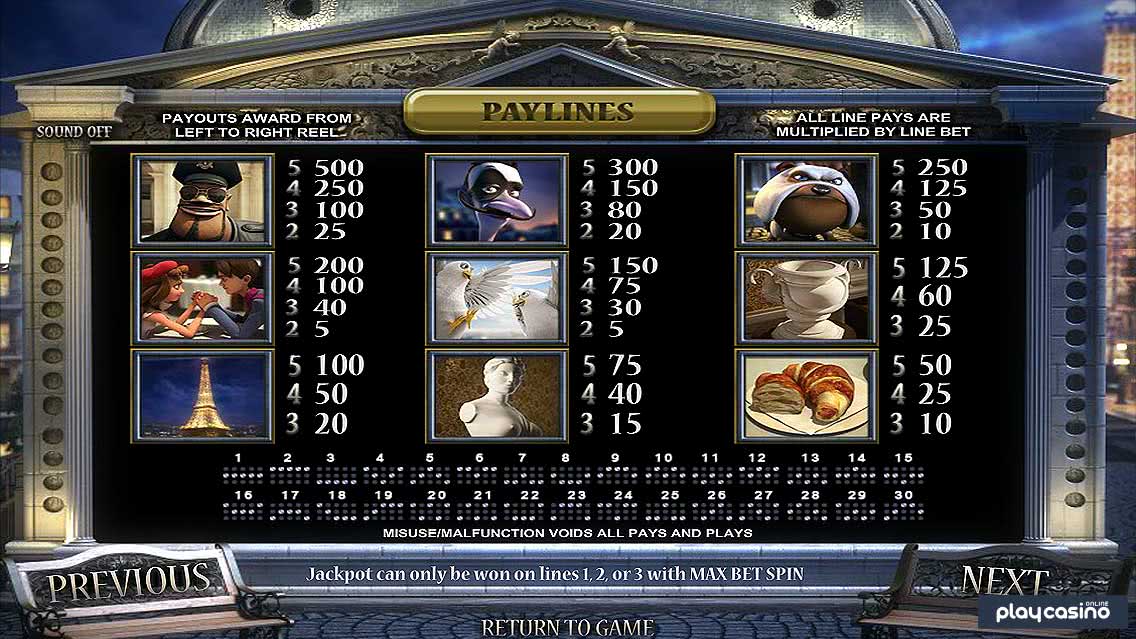 The theme of cops and robbers is one of the oldest in the world, and the A Night in Paris video slot captures it in a big way. As a part of BetSoft’s Slots3 line of titles, you’ll get excellent 3D graphics and a number of different features that can come up during gameplay, which helps out a lot.

What you’ll see from this title in particular and a number of games like it from this developer is that they are a part of an overall portfolio instead of trying to stand out so much individually above all of the rest. They put out a consistent product, even with their more mundane titles, and you end up with games like this one that get a bit of a following. This level of popularity comes from just how solid of a game it is between the progressive jackpot, the free spins, the multiple thief-based features and the fact that more than half of the game’s symbols pay for just two of a kind.