A Night Out Slot 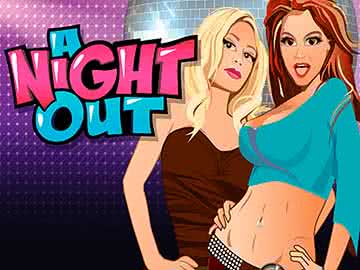 The A Night Out slot by Playtech is based on a night club theme with 20 paylines and a lottery side bet.

Playtech’s A Night Out Slot Review

A lot of the more popular slots in the industry as a whole are based on brands from movies, television, comic books or some other form of media that was already established. The idea is for the slot to take advantage of the already-existing level of popularity. A Night Out is different in that it’s based on a somewhat generic theme, and Playtech has made this title all about the gameplay instead.

Play A Night Out Slot for Free

Format and Layout of the A Night Out Slot

Playtech is a big fan of using basic formats to create a sort of blank slate for building a good experience for players. You see that with a lot of their games, and you see it here as well. You’ll find that this slot has five reels with three rows, and there are 20 paylines. In fact, this may be the most popular format for online slots that there is, and plenty of land-based video slots use this format as well.

Betting is set around three options. You can change how many coins per payline, and your options here are to bet between 1 and 10 on each of the 20 paylines. You can also pick out coins that go from $0.01 to $1 apiece. Your third option is to adjust the number of actual paylines you’re playing with. We suggest that you keep all 20 of them activated. Doing so will maximize your RTP, which means better chances of profiting over a session.

Something we really want to point out is that the graphical style is based on something called vector art, which is very popular in many club scenes. It’s popular because it looks great under many different types of lighting, and while Playtech may or may not have used it intentionally in the A Night Out video slot, it’s worth pointing out regardless.

This means that you aren’t getting some kind of uppity 3D approach, and it also means this game hasn’t ever won awards for having great graphics. Instead, it means that the focus here is on the gameplay and the value you get from the pay table and features instead of on the visual appeal.

The beer mug is something that you’ll see in virtually any bar or club, and it’s the wild symbol in this game. Five of a kind pays a huge 10,000x top jackpot, and that’s one of the largest regular-paying jackpots that you’ll see that’s not a progressive. This symbol shows up on every reel, and it substitutes for all normal paying symbols, but it doesn’t substitute for the bonus symbol or the scatter.

Virtually all clubs have at least one major dance floor, and even small clubs may have several. That’s why the dance floor is the scatter in the A Night Out online slot. Three or more of this symbol anywhere on the game will give you a payout, and these scatter wins are multiples of your whole bet size.

For example, five of a kind pays 50x. This is like a 1,000x line bet win. Likewise, four of a kind and three of a kind pay 10x and 5x, respectively. Along similar lines, you’ll win the same amount as a 200x or 100x line bet payout. That means the scatters have some pretty good wins associated with them.

Something you should be aware of is that the scatter does not trigger any feature in this game. That’s a bit atypical, but it’s not exactly rare.

A bartender can show up on the first or last reel, and he’s the scatter symbol in this game. You’ll trigger the bonus feature for the A Night Out video slot if you get both of them on the reels at the same time in any position. This is a simple round where you’ll make your picks from a selection and get payouts for it. It’s extra value for sure, but there are other payouts on the regular pay table that are much larger than what you’ll pick up here.

With that having been said, it fits perfectly within the theme of this game, and that’s something that Playtech should be commended for.

The Dollar Ball Side Bet

A number of Playtech-powered online slots have a side bet called the Dollar Ball. This side bet always costs $1 per play, and it’s never mandatory. It also does not affect anything within the slot itself, and it basically acts like its own lottery-based side game.

This is essentially a Pick 5-style lottery game with a progressive jackpot. You pick five numbers from a list, and if you get them all right, you win the jackpot. Four correct numbers pays out 1 percent of the jackpot. For three matches, you win $25, and two matches gets $2. If you only pick up one match, you win your bet back with a $1 prize.

The A Night Out online slot’s top-tier payouts, other than the wild and scatter, include three different girls at the club. The blonde with the blue background pays 1,000x for five of a kind. The redhead with the orange background will give you 500x when you line up five on a payline. Five of the brunette on the green background is worth 400x. All three of these symbols will also give a payout for just two of a kind or more.

The five lower symbols in this slot are fruits with assorted drinks. The pineapple drink pays 300x for five, and it’s the only drink that pays for just two of a kind; the rest require at least three matching symbols. The strawberry drink gets you 250x for five of a kind, and five of the orange drink gives you a 200x prize. Wins of 150x and 100x are available for five of the pear drink or five of the kiwi, respectively.

Playtech’s A Night Out slot takes a basic theme and drives it home with some great payouts and chances to win some pretty big prizes. There isn’t much in terms of bonus features, but it’s geared towards a play style where the value comes from the paytable, and in that sense, this is one of their most popular titles they have ever produced.