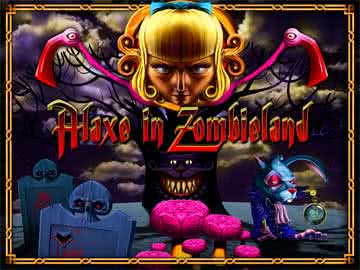 The Alaxe in Zombieland slot is available on the Microgaming Quickfire platform and is based on a fun version of a classic story.

The Alaxe in Zombieland slot is available through the Microgaming Quickfire platform, but it was initially developed by Genesis Gaming. Almost anyone who has seen the game has done so through a Microgaming casino, and most players think of it as a Microgaming-powered slot.

This game is based around a “twist” on the Alice and Wonderland story where everyone is a zombie instead. It’s a cool way to put a fresh spin on a theme that’s been used a lot in the slot world, and it leads to a lot of action with several features and a fun type of gameplay.

Format and Layout of the Alaxe in Wonderland Slot

The basic format of this game has five reels with three rows. There are also 25 paylines, which is a great number because it’s enough ways to win to make the game fun without being a ridiculously high number. It also lends itself to some very even bet sizes. Just make sure that you always have the maximum number of 25 paylines turned on so that you don’t lower the RTP for the game and get worse payouts on average.

You have two options to adjust your bet sizes, assuming that you have all 25 paylines activated. The first is to adjust how many coins you’re actually going to bet on each payline for each spin, and that ranges from one to ten. From that point, you can pick how much you want each coin to be worth. That option runs from $0.01 to $0.20, and your total betting range is $0.25 to $50 per spin as a result. 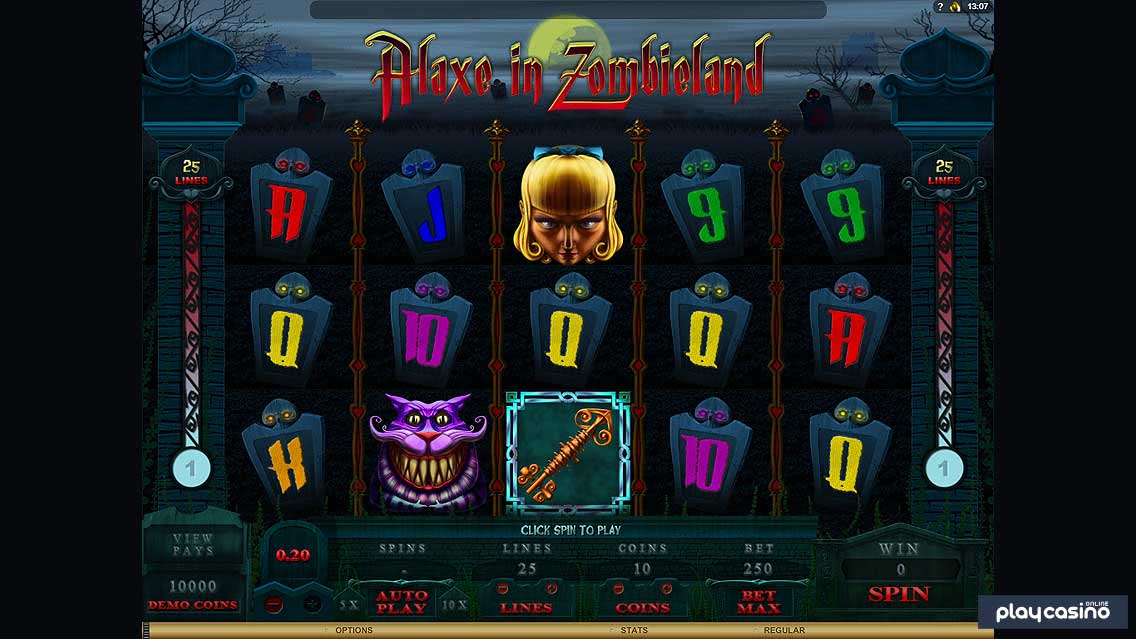 The first symbol in the Alaxe in Zombieland video slot that you’ll really want to pay attention to is the wild mushroom. The top of it is purple and looks somewhat like a brain, and the bottom is a shade of teal with a dark background. This wild will substitute for all symbols but the three scatters we detail below. On top of that, it acts as a 2x wild multiplier. Any winning combination that includes one wild at minimum is doubled as a result. 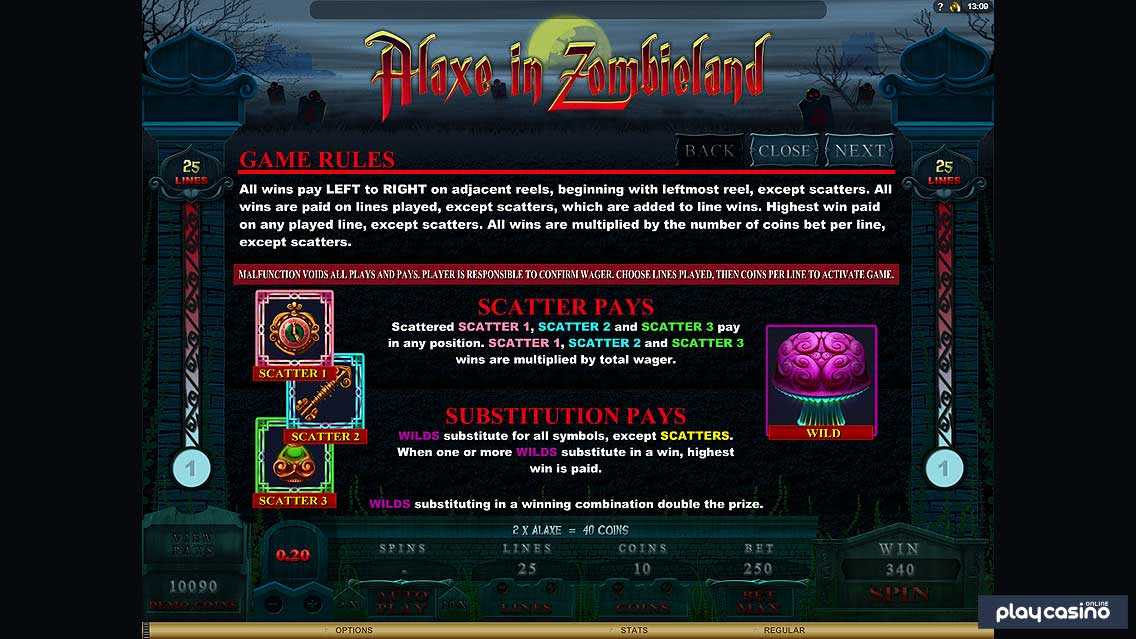 One of the key gameplay characteristics of this slot is that there are three different scatter symbols. The first is the pocketwatch, and it has a red box around it. The second is the key, and it has a blue box. the scatter with the green box is a small tree, which matches the color for obvious reasons. 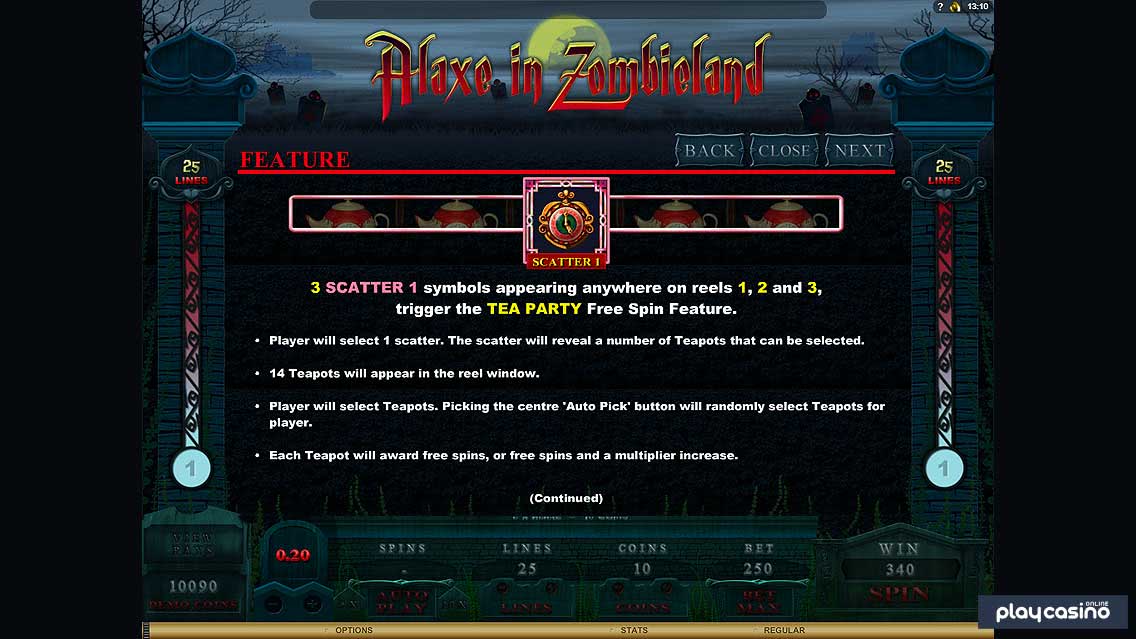 Each of these scatters appears on three reels only. The red scatter shows up on the first, second and third reels. The blue appears on the second, third and fourth. Finally, the green only makes an appearance on the last three reels. 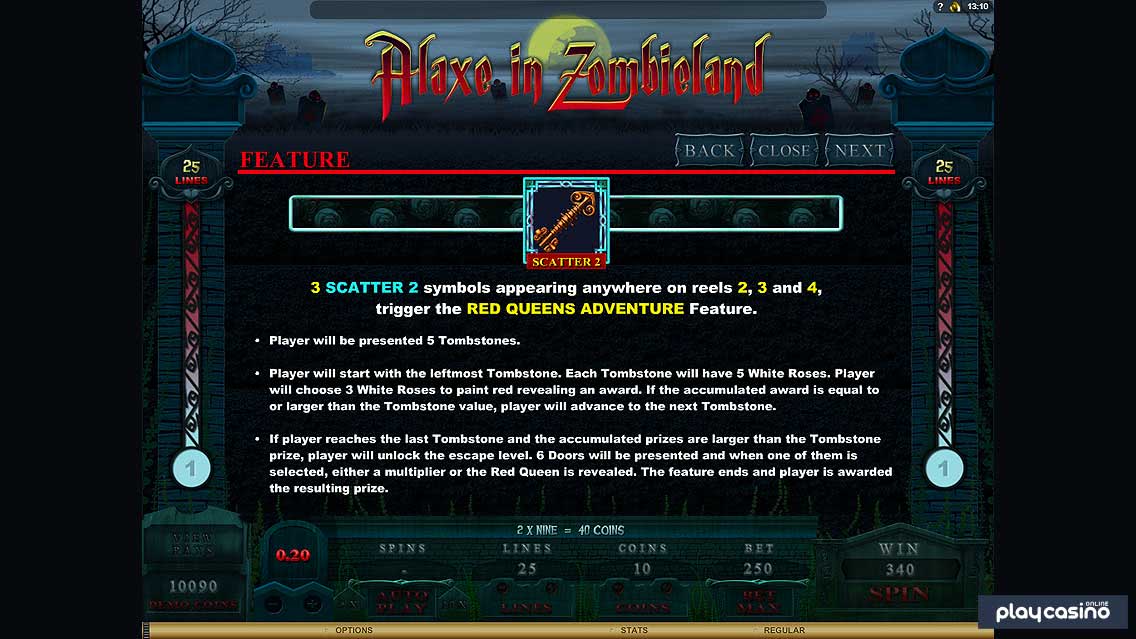 Whenever you get all three of any of these three scatters on the reels at the same time, you’re given a payout. The payout is five times your total bet size for all three of these wins no matter which of the symbols it is. That makes it really easy to remember what the pays are for these three, but you get more value from them in other ways as you’ll see below. 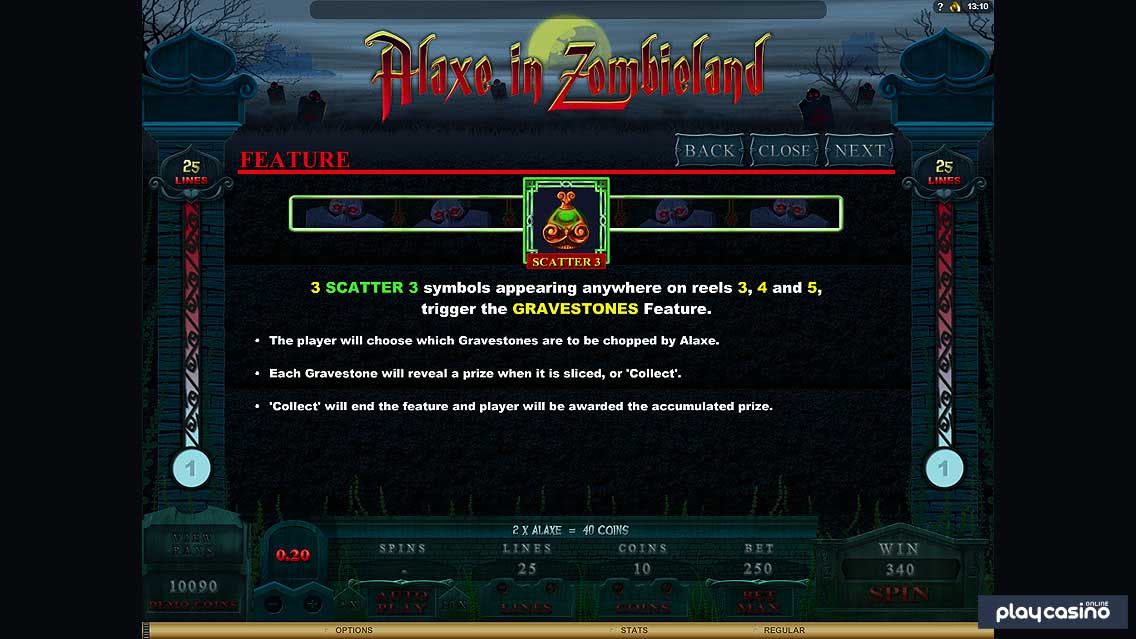 When the watch scatter symbol appears on the first, second and third reels in the Alaxe in Zombieland online slot, then you’ll trigger the Tea Party Free Spins feature. You’ll get to pick from a number of teapots that will give you a number of free spins and multipliers, and then you’ll play those spins out. This multiplier stacks with the wild multiplier, so if you had a 3x multiplier from the feature, it would become an effective 6x if you made a win with a wild symbol in it.

Pick up the key scatter on the middle three reels to activate the Red Queens Adventure feature. You’ll have five tombstones put in front of you that have five white roses on them each. You pick three white roses to paint red, and they give you rewards. If the total of your reward is higher than the hidden tombstone value, then you’ll proceed to the next tombstone to win more prizes. This continues until you don’t get enough of a win to move to the next one.

When three of the green scatter appear on the third, fourth and fifth reels, you’re taken to the Gravestones Bonus Round. Pick from the gravestones to see which you want Alaxe to chop with her axe. Each one she chops gives you a payout until you hit the “collect” symbol, which ends the round. 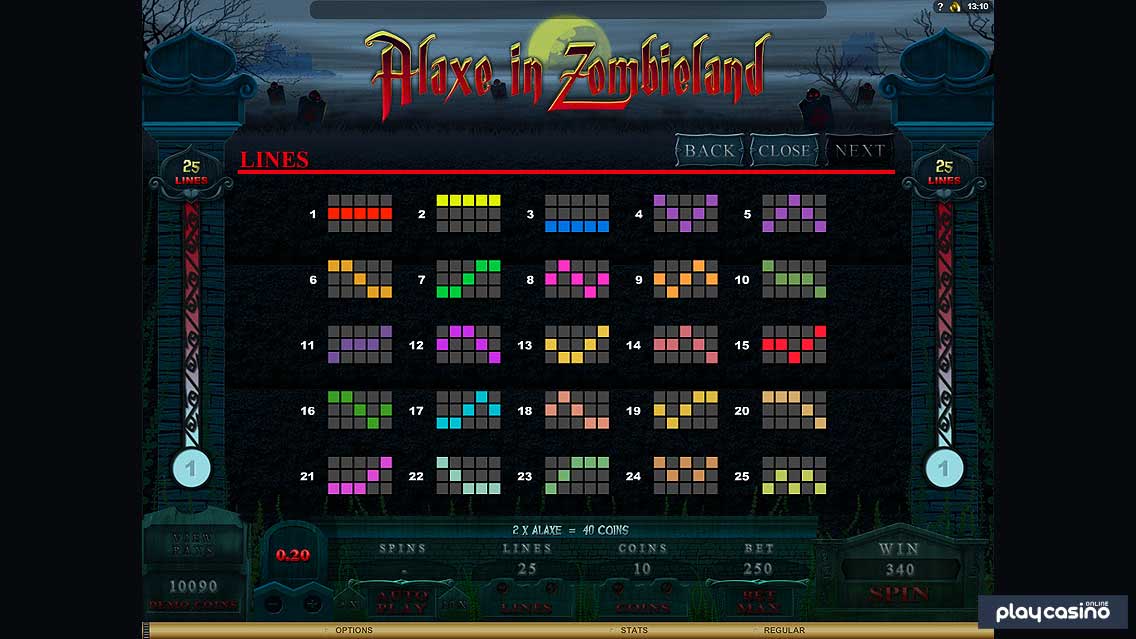 There are four main characters from the original story that are found in the Alaxe in Zombieland online slot. First up is Alaxe, which is also the only top-tier symbol to pay out for two of a kind or more. Five of this disturbed young lady gets you a 2,500x win, and you can also pick up 1,000x for four. The purple cat pays out 1,250x for five, which is also a strong payout.

The win of 750x for five of the Mad Hatter isn’t a bad win at all. The white rabbit, who appears to be staring at a glowing, green ball for some reason, earns 500x when you get five of him on an activated payline. These wins are top-heavy, but there are some mid-level pays in there to balance things out to a degree. 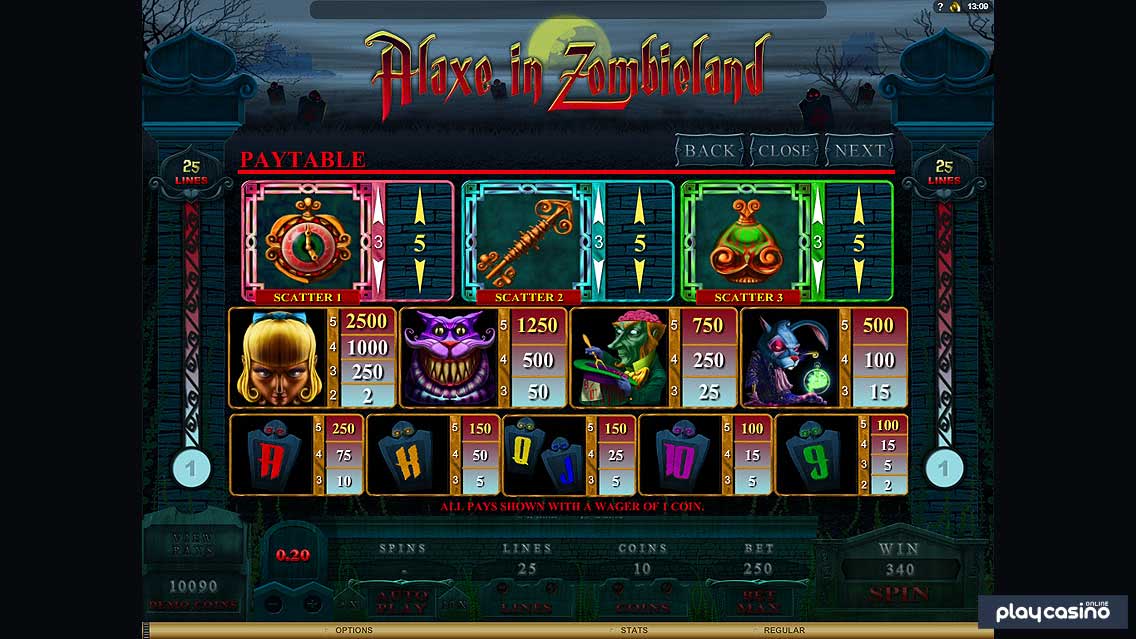 There are six tombstones with card rank symbols on them in this game. The first is the red A, and it awards 250x for five on an activated payline. this drops down to 150x for the orange K, the yellow Q and the blue J symbols. When you get down to the purple 10 and the green 9, both symbols get you a 100x win for five that line up on a payline. However, the nine is different than the rest of the card rank symbols because it can give you a payout for just two of a kind.

A big part of the online slot experience is getting to be in the middle of a new environment, and the Alaxe in Zombieland online slot achieves that in a big way. With so many features and so many ways to get significant payouts, especially with the wild multiplier and four-figure wins at the top of the pay table, you’re always a spin away from a pretty big win. Overall, the popularity of this game comes from the combination of a strong, fairly unique theme and a feature-driven style of gameplay.