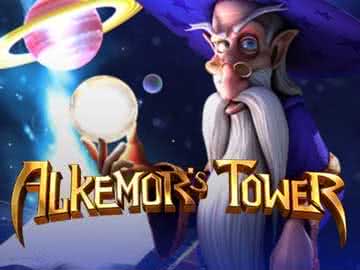 Alkemor’s Tower is a video slot by BetSoft that features several levels of a magical tower that’s the home of a powerful wizard named Alkemor.

BetSoft is a company that’s really good when it comes to building up their own characters and slot concepts instead of relying mostly on outside brands or common motifs that are seen in the genre. Alkemor’s Tower is a good example of this as a video slot that is based on a wizard character they created. This title has multiple stages of play, but it also has tremendous 3D graphics as a part of their Slots3 line, which is often considered the most visually impressive line of slots available in the industry as a whole.

Format and Layout for the Alkemor’s Tower Slot

The layout for this game uses five reels and three rows with 243 ways to win. This doesn’t work like a traditional payline structure. Instead, it turns every symbol into a left-to-right scatter, so you can really just pick one symbol from each reel, from left to right, to make winning combinations. Betting for this game structure is based on 30 coins per spin here, and you can choose to multiply that by 2-5 for up to 150 coins per wager. Along those lines, coin sizes run from $0.02 to $1 apiece, putting the overall available range of betting at $0.60 to $150 per turn.

We should point out here that this game has a high volatility. Because of this, we will suggest that you start out playing this game with smaller bet sizes than you might typically use. This will give you a feel for how the swings work in this game, and then you can make a more informed bet sizing decision from there. Alternatively, you can continue to play with smaller bet sizes and simply play longer sessions to effectively wager the same amount of money over the long run. 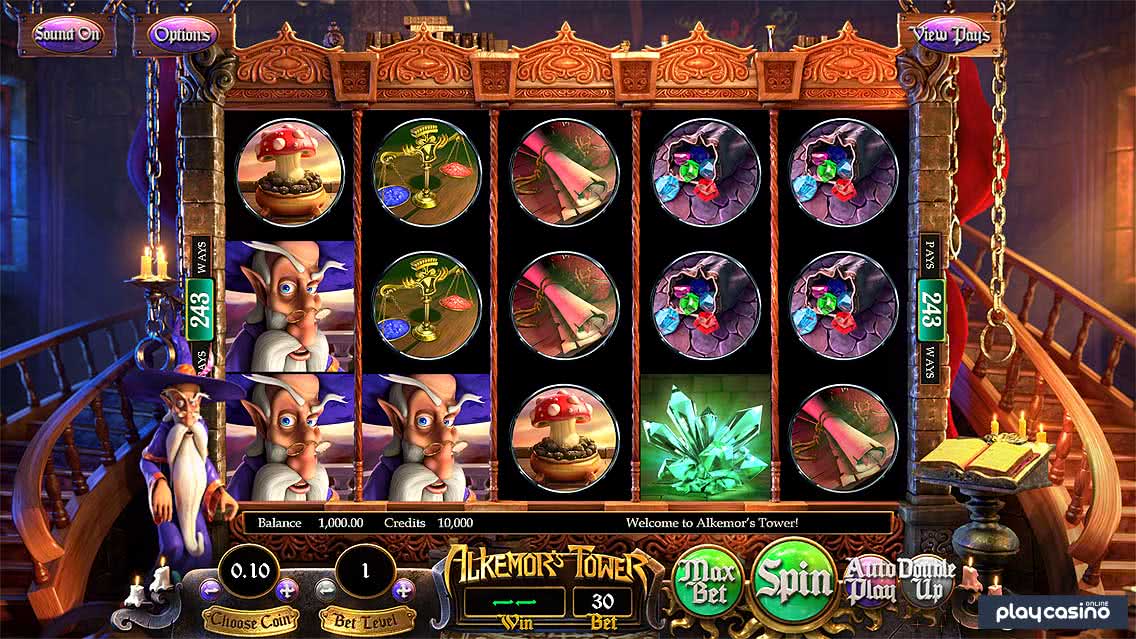 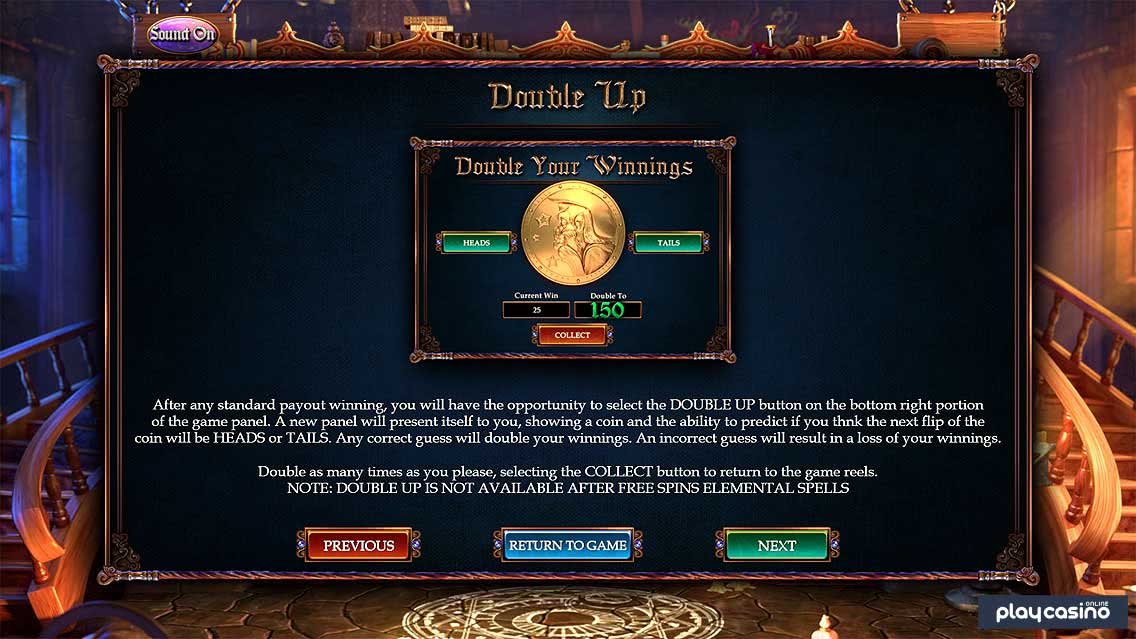 A big part of the regular gameplay is driven by four elemental spells that you can cast from the reels. There are four corresponding potions for the four spells that you can cast: air, water, fire and earth. You cast a spell by getting a spellbook on the first and second reels with one of the potions on the third reel. You can also pick up a spellbook on the fourth or fifth reels at the same time, and those will serve to boost the power of the spell. Here are the four spells and what they can do for you. 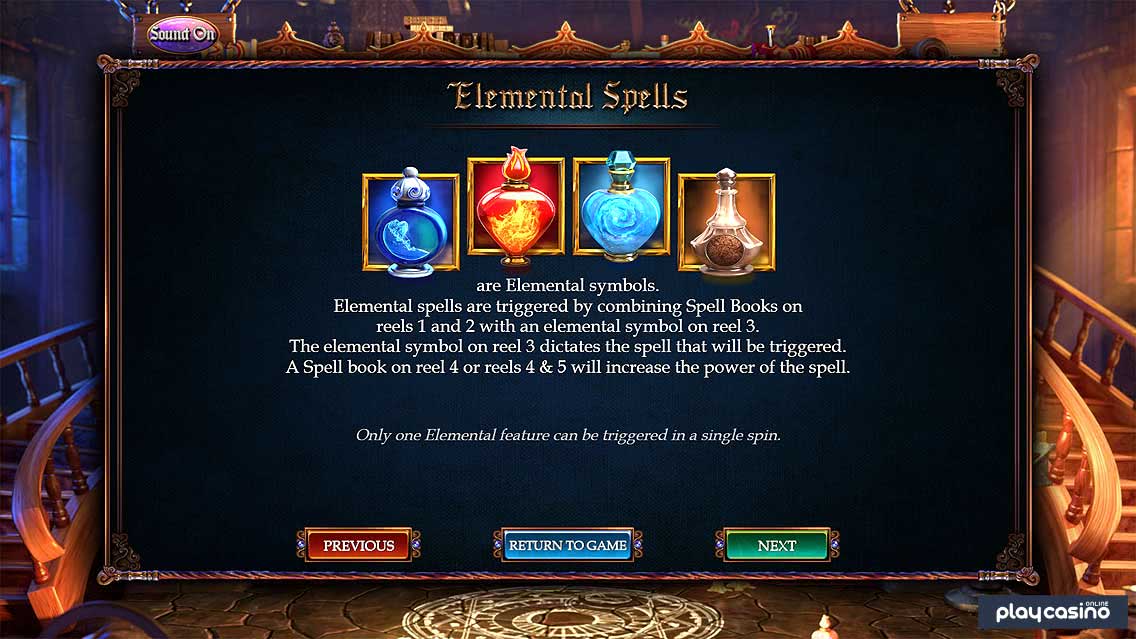 This spell turns all of the spellbook and elemental symbols on the second, third, fourth and fifth reels into wild symbols. The spellbook on the first reel will turn into a random regular paying symbol. You will have your wins calculated from there, which will be considerable with the placement of the wilds in this 243-ways game, and they will then be hit with a multiplier that is determined by the total number of spellbooks and elemental spells that started the feature. 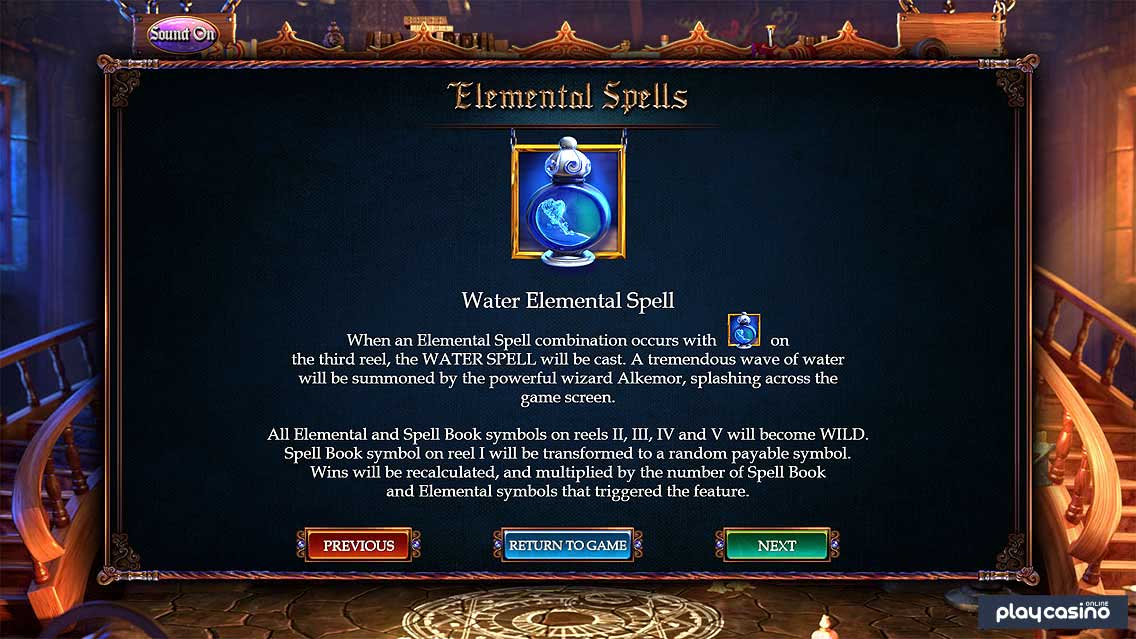 With the earth spell, you’ll see meteors crash into the reels. This gives a cool graphical effect, but what happens regarding payouts is that all spellbooks and elemental symbols turn wild to give you payouts, and then you get what amounts to a free re-spin whenever the meteors crush all other symbols, knocking them out of the way. New symbols fall into place, and you get payouts from that set of symbols as well. 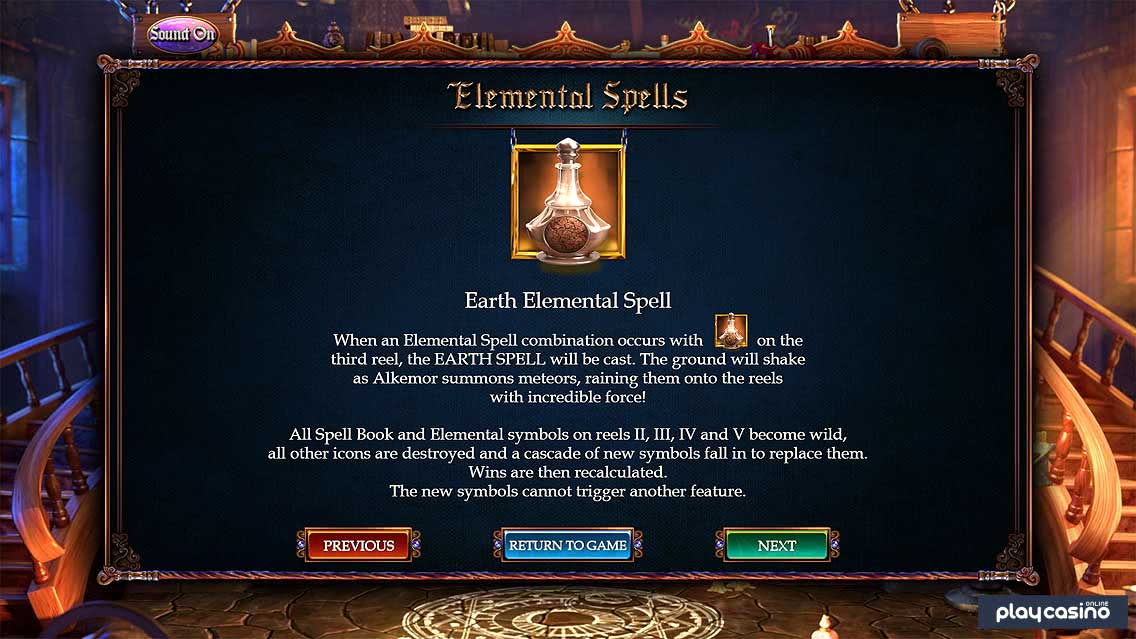 The air spell causes a giant tornado to run across the reels. This feature works pretty much exactly like the earth spell in the sense that you turn the bonus symbols wild and get a re-spin. 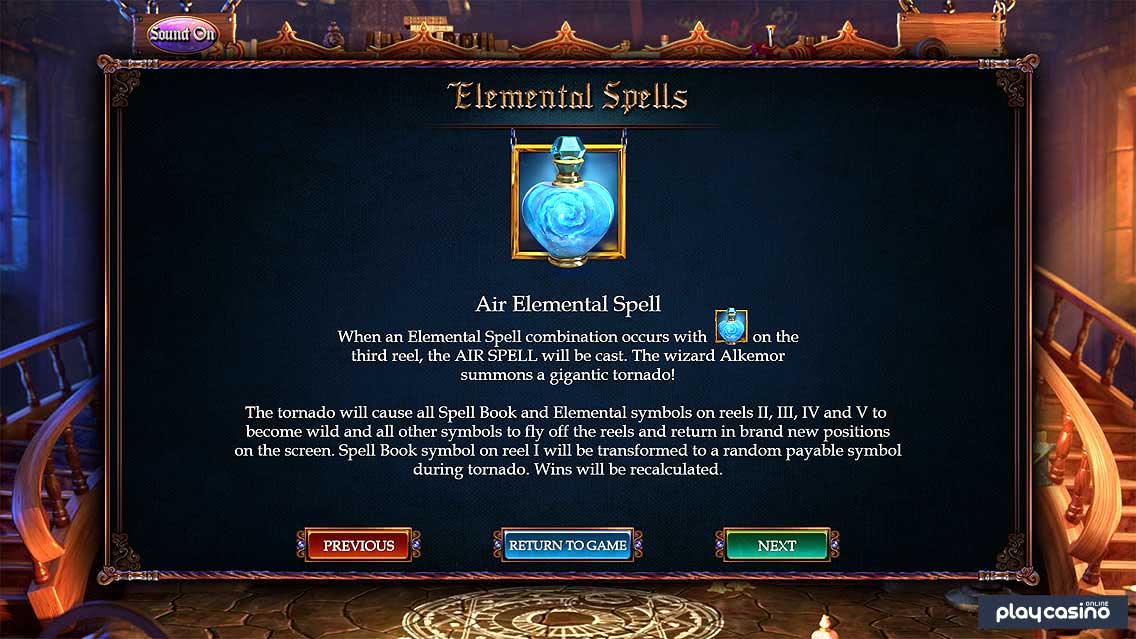 With the fire spell, you get wilds for the spellbooks and elemental symbols on the seocnd, third, fourth and fifth reels, just like before. The spellbook on the first reel turns into a random paying symbol, and then extra wild symbols are added to the reels at random. The number of extra wilds is determined by the number of spellbooks used in the original triggering of the feature. After the wilds are added, you’ll get the calculated payouts. 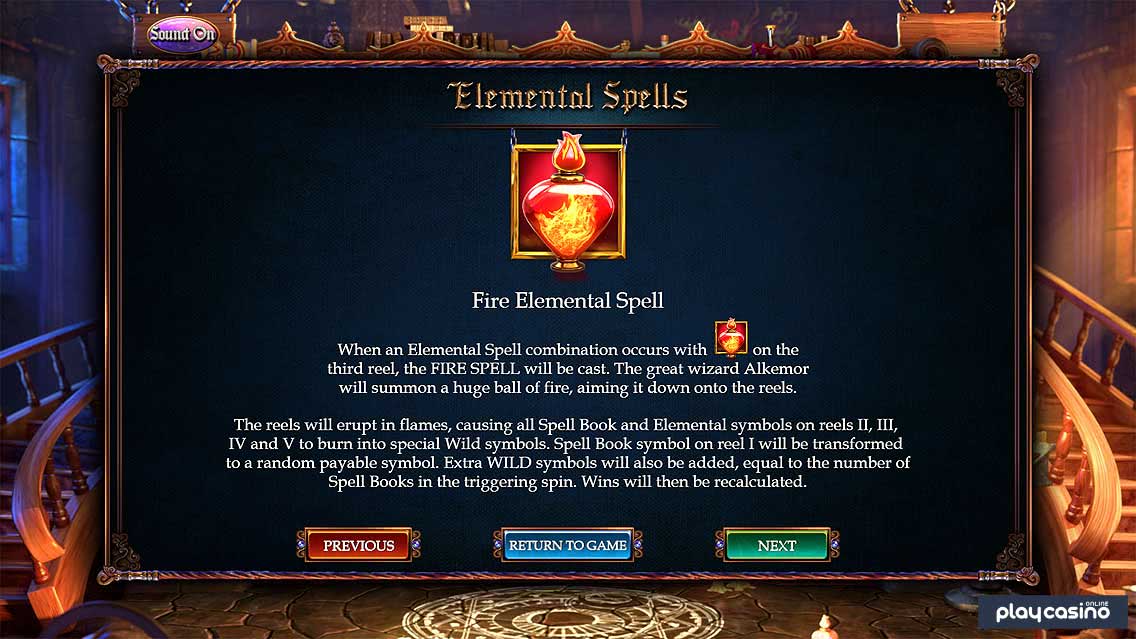 These four spells all incorporate wild symbols into the payouts, which is something that you don’t have during normal play. They are also a very interesting and unique aspect of gameplay for the Alkemor’s Tower slot, and it really shows that BetSoft can be innovative with their features.

You can also use the spellbooks to trigger two different free spins bonus features. The first is the nature floor of Alkemor’s Tower, and it starts by getting two spellbooks on the first two reels along with the plant book (with vines on it) on the third reel. On the nature floor, you’ll get between 10 and 15 free spins. Four extra symbols are added to the reels with good lower-tier payouts (they replace the normal lower-tier symbols, as you’ll see below). You can also trigger the vine feature with a vine symbol on the middle reel. This vine will turn into a monster plant that will eat different symbols around it on the reels to give you instant payouts. 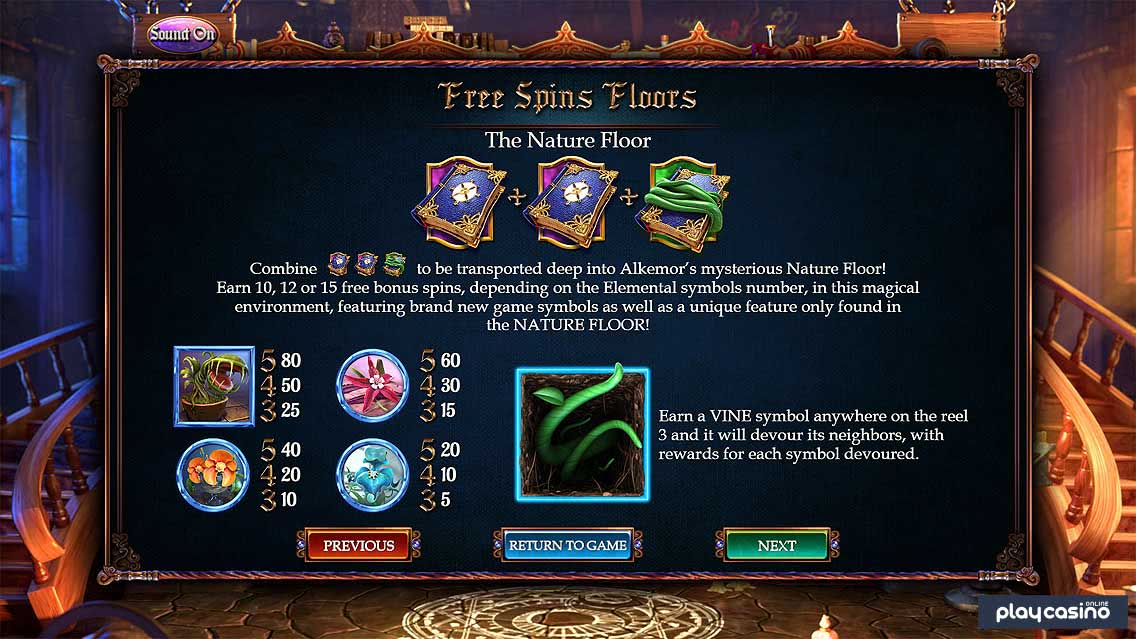 A spellbook on the first and second reels along with the celestial spellbook on the third reel takes you to the Celestial Floor Bonus Feature. In this feature, you’ll again pick up 10-15 free spins. You also get four special symbols added to the reels to beef up the bottom end of the pay scale, and you’ll also have a black hole symbol that shows up on the second and fourth reels. Whenever this symbol shows up, it pulls in some of its neighboring symbols to give you instant win payouts right then and there. 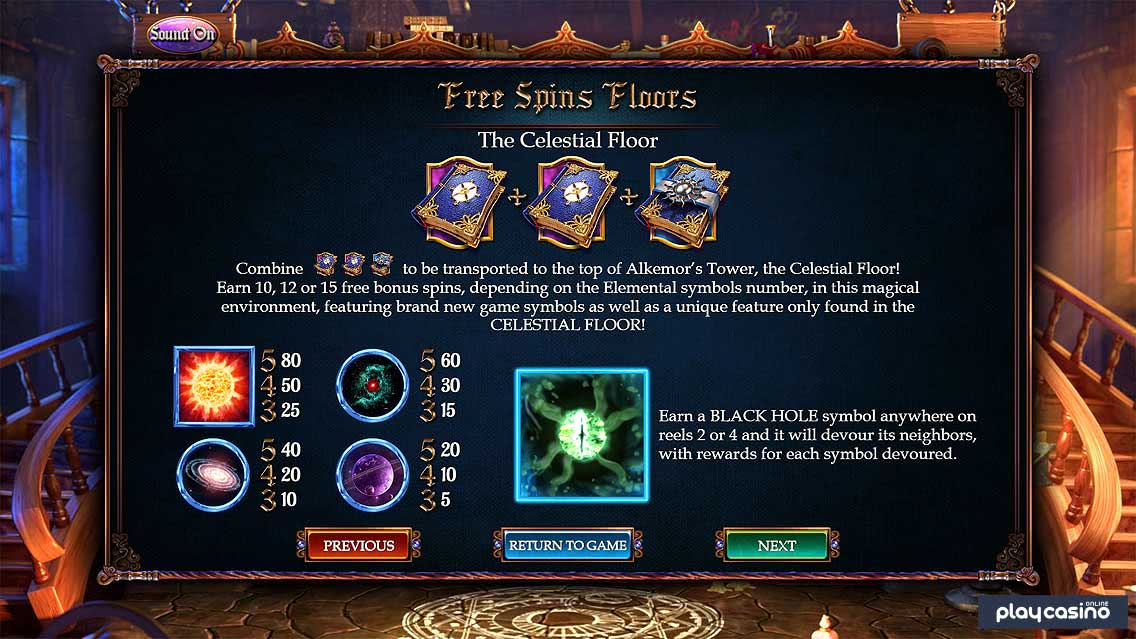 There are eight paying symbols in the regular game, but only four of them have notable payouts. Five of Alkemor himself will give you 350x, and five of the green crystals pays 200x. The golden coins gives players a solid 150x win for five of a kind, and you can also pick up 100x for five of the rings. Some of these symbols can be replaced during the free spins bonus feature, which is something we think is really cool because it plays into the concept of there being different floors to Alkemor’s Tower that you have to work through. 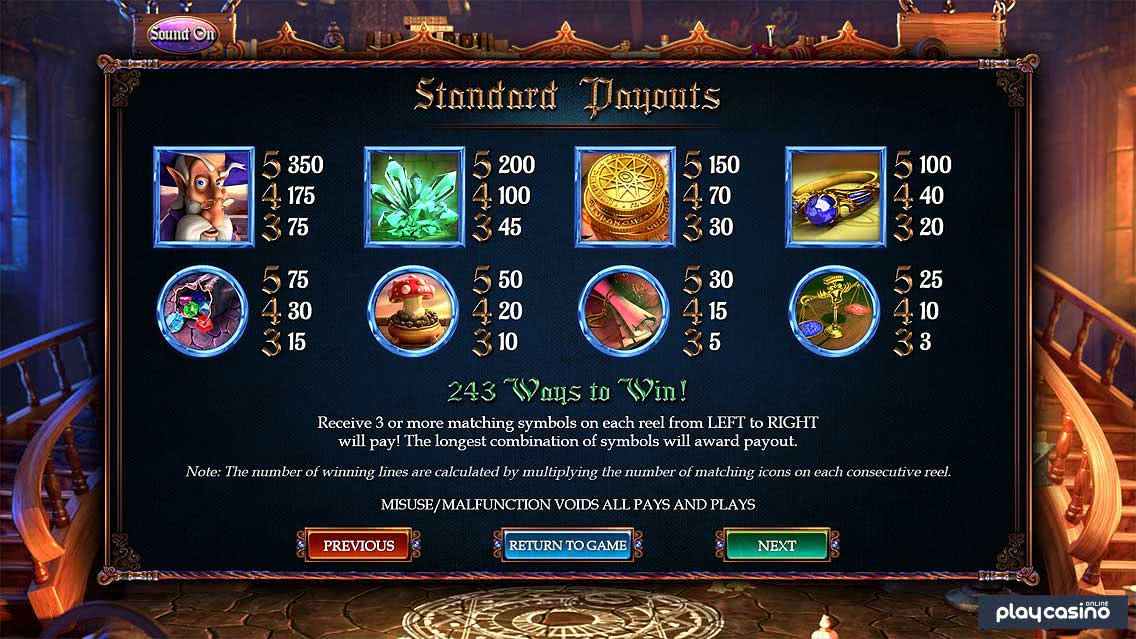 Pulling It All Together

Alkemor’s Tower is an excellent example of BetSoft developing a game in its Slots3 line that has exceptional graphics, but the gameplay is also on the highest tier in the industry. It’s packed with bonus features that make sense in the context of the concept of the game with different levels of Alkemor’s Tower for the free spins features and four different spells that can be cast to give you wild symbols, re-spins and extra random wilds added to the reels. Overall, everything comes together to give this game an awesome feel because everything is tied to the theme of the slot.