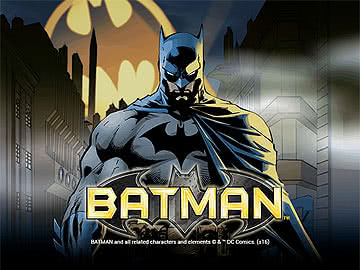 Batman is one of the most iconic super heroes of all time, and he’s found in the NYX Gaming Group’s slot of the same name with respins, a bonus bet feature and more.

Batman was one of the first super heroes who was portrayed with very serious flaws, and that’s one of the reasons why he’s remained so popular throughout the decades. However, the NYX Gaming Group has pulled together an excellent slot based on this crime-fighting hero, and it uses a comic book style of drawings for the background and the symbols that fits the concept extremely well. As is the case with everything to do with this particular comic book franchise, there’s a ton of action as well.

Format and Layout of the Batman Slot

As we mentioned above, everything is about the action when it comes to this game, and it starts with the actual layout. There are five reels and four horizontal rows in the Batman video slot, and across that 5×4 grid are a whooping 50 paylines. That means you have 50 ways to win on each spin, which is a lot. You’ll adjust your betting based on wagering one coin per payline, and the available coin sizes vary from $0.01 to $1 apiece. The total betting range is $0.50 to $50 per spin, which is plenty wide enough for any player at any level of stakes.

We want to point out as well that this game has a fairly high volatility. A big part of this is because of the bonus bet option. The bonus bet costs you an extra 10 coins per spin, which increases your bet from 50 coins to 60 per turn. You get two main benefits whenever you activate the bonus bet. First, you’ll have access to the Descent Into Madness feature, one of the key bonus features in the game. Second, extra wild symbols will appear at random on the middle three reels.

We strongly recommend that you play with the bonus bet activated in this game. In fact, all of the payouts and other details in this review are assuming that you’re playing with it. It’s such a big deal that if you plan on not using the bonus bet, you should really choose a different game to play because it causes a boost of more than 3.5 percent to your RTP percentage, which is huge.

Batman himself appears as the wild symbol in this slot. You’ll only find him on the middle three reels, so he doesn’t make winning combinations by himself. However, he will substitute for anything in the game besides the scatter and bonus symbols. Aside from that, extra wilds have a random chance of appearing on the second, third and fourth reels if you have the bonus bet activated (which you should if you’re playing the game). He’s a critical symbol in that he helps you to get a lot of extra winning payouts.

There are two different Bat Signal symbols in this game. One of them says “bonus” and has a blue tint, and the other says “scatter” and has a gray tint. Each of them has the same payouts, and they both operate as left-to-right scatter symbols. Five of either of these symbols will get you a win of 5,000x. This is a pretty large jackpot to have two different ways to win. Four of either gets you a 750x pay, and three will win 200x. You can even pick up a solid win for just two of a kind, and that comes in at 100x. Each of these symbols are also responsible for other features.

If you get Commissioner Gordan on the first reel with the Bat Signal on the fifth reel (or vice versa), then you’ll trigger the Batman Respin feature. This feature gives a tremendous amount of value. After your regular wins are paid, one of the middle three reels become completely filled up with wild symbols. From there, the first and last reels will spin three times, awarding you payouts after each spin. All payouts are doubled during this feature as well, so it’s clear that there’s a huge amount of value waiting for you when you line up the symbols correctly to trigger this particular bonus round.

We’ve noted this above, but if you do not have the bonus bet activated, you cannot get access to this feature.

When you’re able to get three of the bonus symbol from left to right on the reels, you’ll trigger the Descent Into Madness feature. The idea here is that Batman is going after escaped inmates, and you get to target the specific ones you want to go after. If you clear the inmates, you’ll face off against the Joker. Hit him three times to keep him from escaping with the Batarang, and you’ll win a payout worth 100 times your total bet. This is a feature that ties directly into common storylines, and it’s one of the things that makes the Batman online slot stand out from many other games that use super hero themes.

The Joker is Batman’s biggest nemesis, and he’s the top-paying symbol in this game aside from the bonus and scatter symbols. Five of a kind will get you a pretty solid 2,000x win. Commissioner Gordan is the main cop that has Batman’s back, and he’s up next with a 200x win for five. Both of these character symbols will award you with a payout when you line up just two or more, and they’re the only regular-paying symbols in the Batman video slot to do this. All other regular symbols require a minimum of three for a win.

The Batmobile and the motorcycle pay out 150x for five of a kind of either. You can win 125x of five of the spotlight or the “bang” gag gun that’s being held by the Joker, one of this signature weapons. The Batarang or the flower spraying acid gets you 120x, and you can win a very solid 100x for five of the grappling hook or of the Joker’s playing card.

The Batman online slot by the NYX Gaming Group is a pretty tremendous game that centers around one particular play style. That play style uses a high volatility and a lot of chances to hit major payouts in exchange for fewer small and medium wins. As a result, you’ll need to drop your bet size down to something you’ll be more comfortable with in terms of the swings.

You also need to make sure that you always have the bonus bet activated. There’s a tremendous boost to the RTP percentage for players when you do, and it actually cuts the house advantage down as a percentage by more than one-third. Many games with bonus bets have them cost more than the price of the spin itself, and that’s not the case here because it’s been made particularly affordable, so make sure you use it.