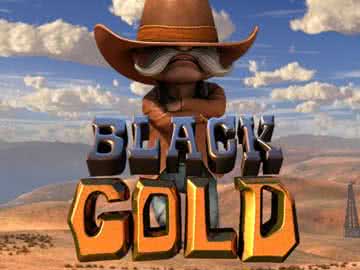 The Black Gold slot by BetSoft is all about striking oil out in what appears to be the middle of nowhere in Texas. You’ll have lots of features that center around getting that oil up to the surface, and you’ll have lots of ways to win with free spins, re-spins, multipliers and more.

The Black Gold video slot is a part of the Slots3 line by BetSoft, and that means it has tremendous 3D graphics. This game is all about drilling for oil and turning that into a lot of money, and if you get the right symbols on the reels at the right time, you’ll hit oil in a major way and kick your bankroll up a notch in the process. The gameplay of this slot is feature-centric, and there are lots of ways to activate features in the regular play and for bonus modes. Overall, this is a very balanced game with a lot of things to get excited about that appeals to many types of players.

Format and Layout of the Black Gold Slot

Visually speaking, there’s a lot going on with the surroundings of this game, but the basic format is straightforward with five reels, three rows and 30 paylines. You can adjust how many lines you want to play with by using the appropriate controls on the bottom-left of the screen, but we strongly recommend that you keep this at 30 to keep your RTP percentage as high as it can be.

For the betting options, you get between one and five coins per payline, so your options are 30, 60, 90, 120 or 150 coins per spin. You can pick from a handful of different coin sizes as well, and the minimum is $0.01 for a minimum cost per spin of $0.30. The maximum coin size is $1, and when you apply that to the most coins you can bet on each turn of 150, that leads to a max bet size of $150 per spin. Everyone from high rollers down to low stakes fans will have bet sizes that fit their personal preferences. 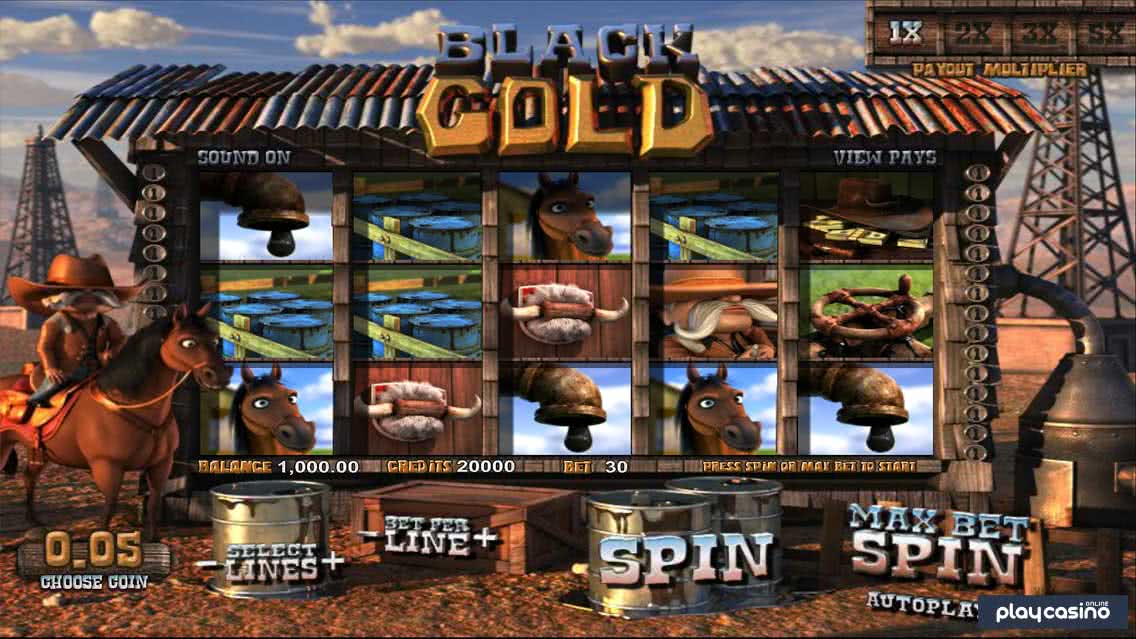 Chances are that the first feature you’re going to run into in the Black Gold online slot is the center reel re-spin feature. The way this works is that you’ll need to hit a regular win first. If you do that, you’ll be paid your prize, but then the middle reel will spin again while the other four reels hold still to give you a free chance at extra wins. If you do win, the process continues until you finally hit a spin where you don’t get any new payouts. 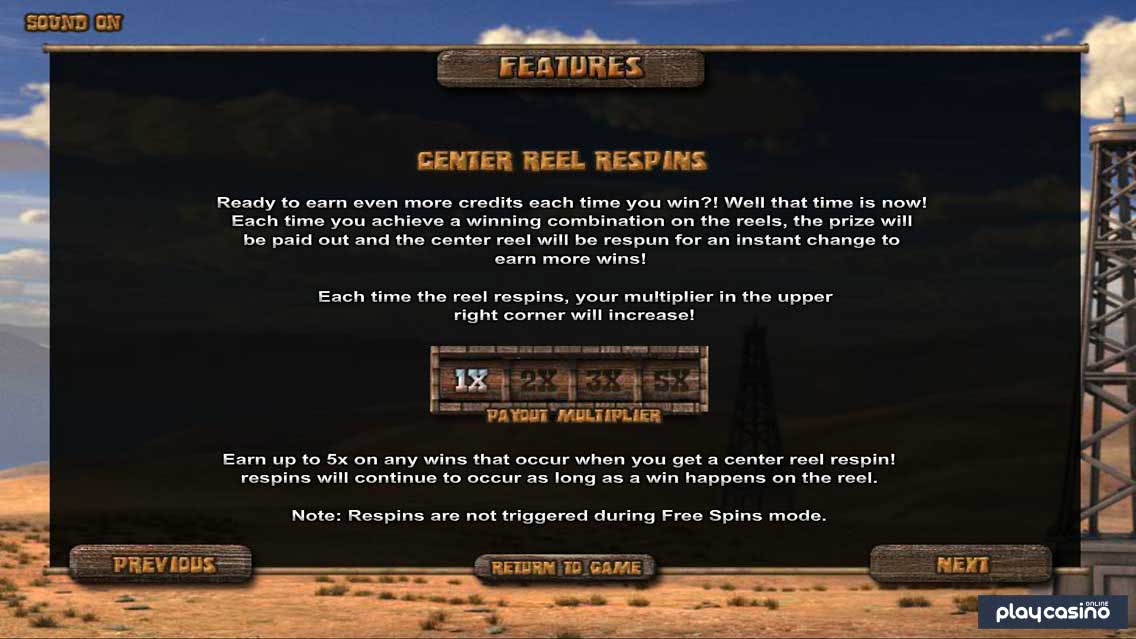 To make this feature even more valuable, look up to the top-right corner of the screen to see the payout multiplier meter. You’ll start at 1x for your first spin, and the first re-spin kicks this multiplier up to 2x. A second re-spin makes it 3x, and all re-spins after that are given 5x. This is a multiplier that’s applied to all of your re-spin payouts, so it’s pretty easy to get some tremendous pays right away without having to activate any other bonus feature like the free spins or second screen bonus rounds in this game.

PIck up three or more of the barn symbol anywhere on the game board to get a set of free spins. During these free spins, the barns become wild, and it acts as a wild multiplier of up to 10x. The multiplier itself increases each time the symbol shows up in a winning combination in this feature. It’s worth noting that the free spins cannot be re-triggered, and it’s also important to note that you will not have the re-spin feature activated while in this game mode. It’s easy to think about why that is because you could get wilds on the first two reels, and the third reel would never stop spinning because any possible set of three symbols would give you a win. 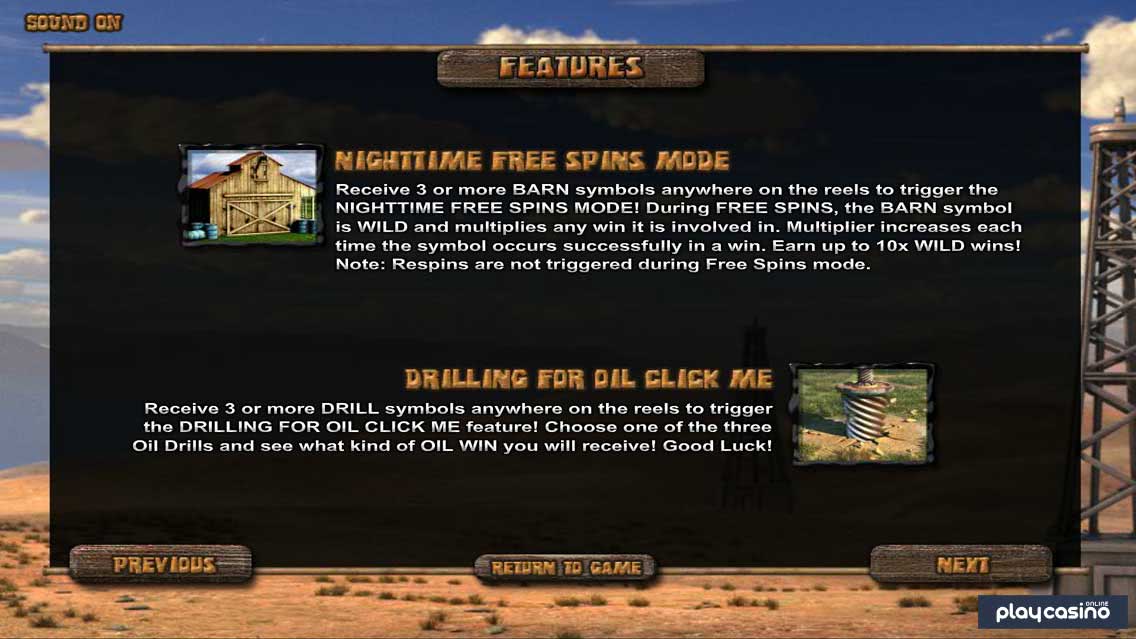 Drilling for Oil Bonus Round

In the Black Gold video slot, you can get three or more of the drill symbols anywhere on the grid for a second screen feature. You’ll basically just pick between three oil drills on the screen to receive a random prize. This prize can be pretty big, so this feature is worth a lot, but it’s essentially just a random payout for an extra prize in the form of an instant win.

On the first, second and fifth reels, you can find an oil pump jack. Get all three of them to play a bonus feature where you try to guess if the number on the drill will be higher or lower. This is a fun game with a lot of interaction, and you get a payout for each time you’re right. Four misses means you end the feature, but you’re virtually guaranteed some kind of win here with the way the game it set up. That makes it a lot of fun, especially with the character standing around cheering you on and generally being hilarious. 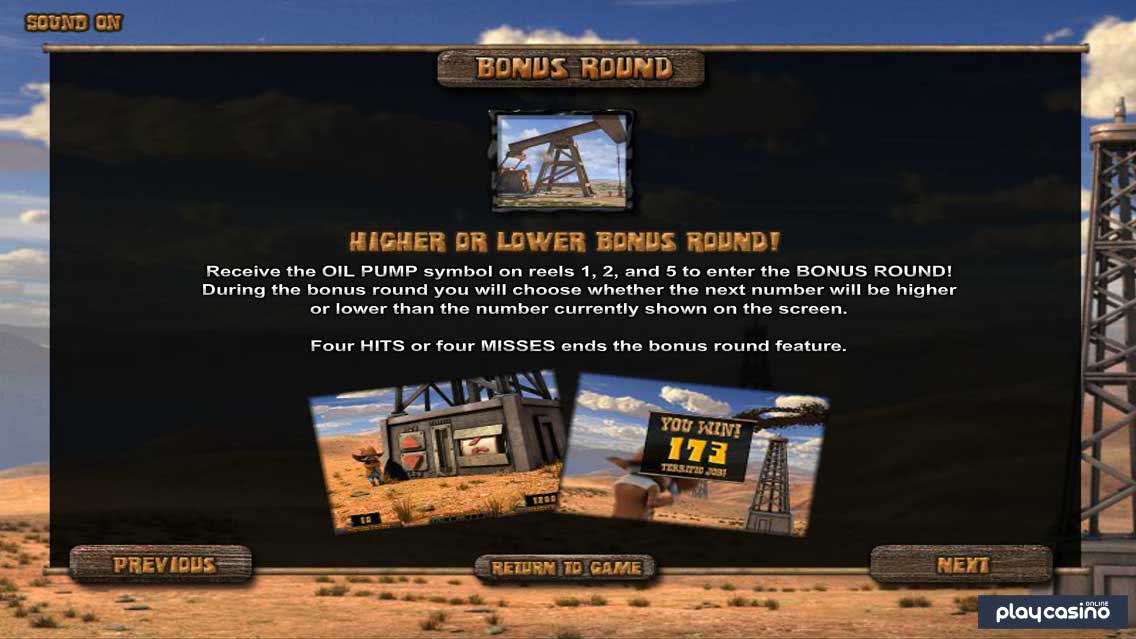 The Texan with the big hat and big mustache pays 400x for five on an activated payline. He’s the same character sitting on his horse beside of the reels during gameplay. Speaking of the horse, he’s the next-highest symbol in this slot, and five of a kind is worth a 200x win. Five of the blue oil drums gets you 100x, and five of the hat with the cigars and cash is worth an 80x win.

There are also four symbols on the bottom end of the pay table. The oil coming out of the pipe pays 60x when you line up five. Five of the valve wheel in front of a grassy background gets you 50x, and you can make it 25x for five of a kind of the horns on the wall. Finally, the lowest-paying symbol is the no tresspassing sign, and that will earn you 10x for five.

Keep in mind that some of these pays are pretty small, but they’re actually worth more than they seem because of the multipliers and the re-spin feature that gives you more wins on average per spin than you’d tend to get otherwise. In short, the hit-rate is a lot higher than normal in this game, so you’re getting paid more often with smaller prizes, on the bottom end of the pay table in particular. 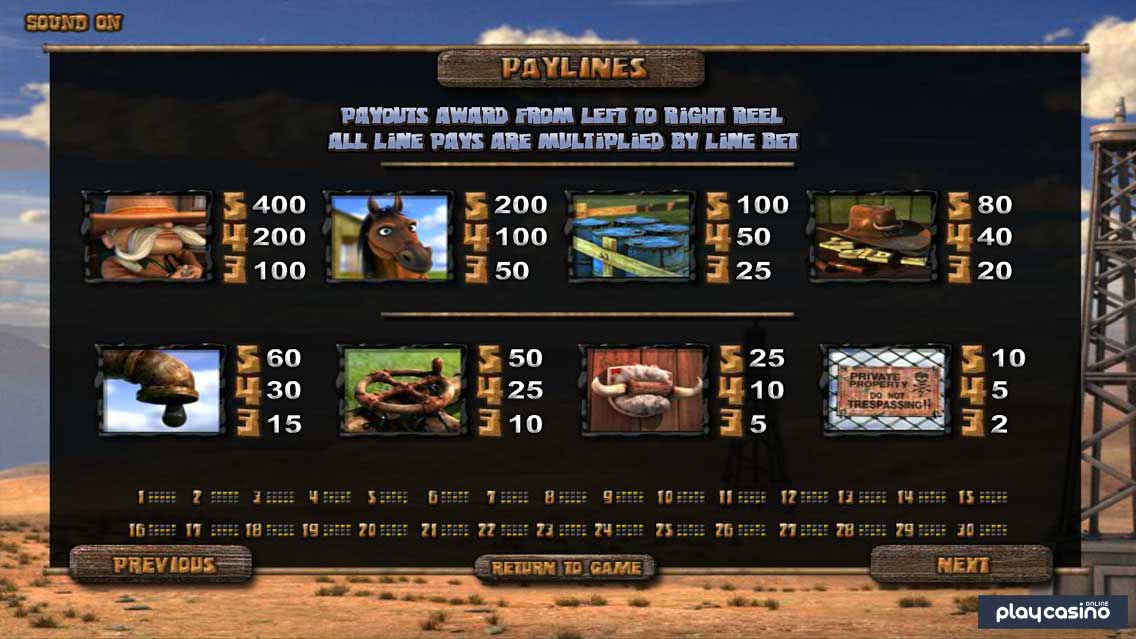 We imagine that it’s difficult for a lot of players to avoid just falling in love with this game right away the first time they see it because it packs so much into one title. With the Black Gold online slot, you’re getting a fun character, lots of valuable features and a balanced pay table all in one. It’s no surprise why this game’s popularity has stayed at a high level since it was first released.