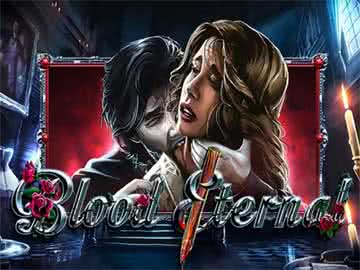 The Blood Eternal slot by BetSoft has an intense Gothic theme with vampires, gargoyles and all kinds of other spooky creatures across six rows of action with 30 paylines. Gameplay centers around free spins and the progression that two humans take into becoming vampires.

Stories surrounding vampires and what they do their human hosts have been around for centuries, even before the original Dracula novel by Bram Stoker that first came out in 1897. The Blood Eternal slot by BetSoft centers on this type of theme, and it makes it a bit interactive with features based on being turned and on vampire bats swarming the reels. It’s not their only vampire-based slot, but they’ve still went out of their way to make sure that it stands out quite a bit.

Format and Layout of the Eternal Blood Slot

The format of this game is a bit larger than most video slots. Instead of the typical layout with five reels, this game has six, and they didn’t just make it larger because they felt like it. Instead, some of the features in this game, including the top jackpot, depend on the larger format. Along with this are 30 paylines that pay in both directions spread across three rows of symbols for an 18-symbol grid. 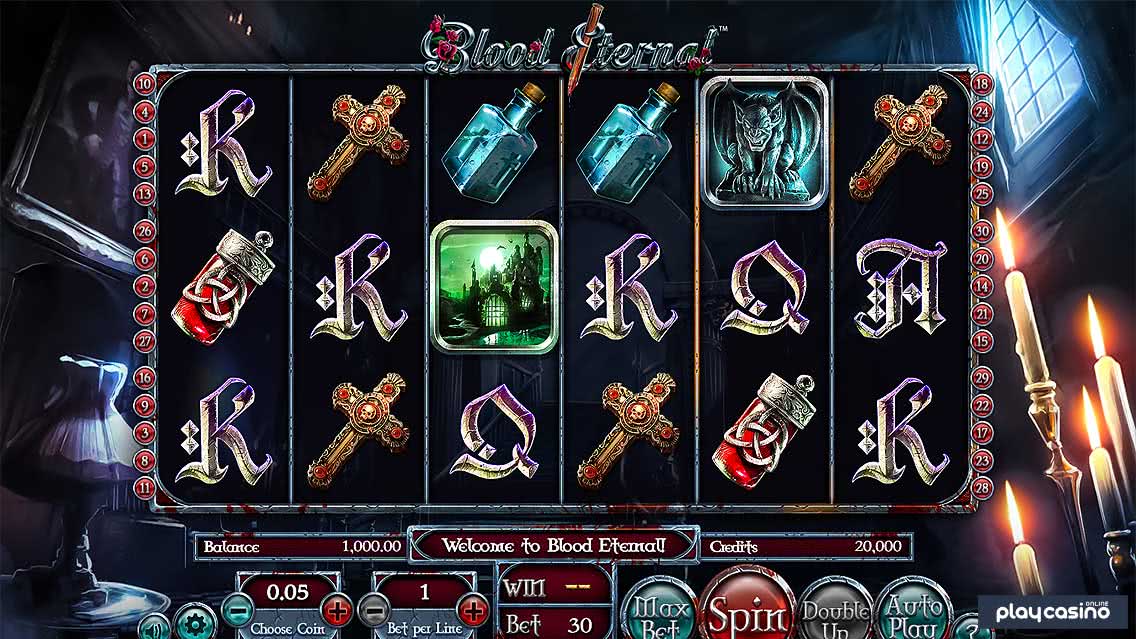 Betting can be adjusted in two ways, though you can’t play with fewer than 30 paylines in this slot. You’ll have options to bet between one and five coins per payline, so you have a maximum bet of 150 coins per spin, and you can choose coins that range in value from $0.01 to $1. The betting range is then $0.30 to $150 per spin, which is plenty wide enough to be inclusive for all different types of players and the bet sizes they’re comfortable with. 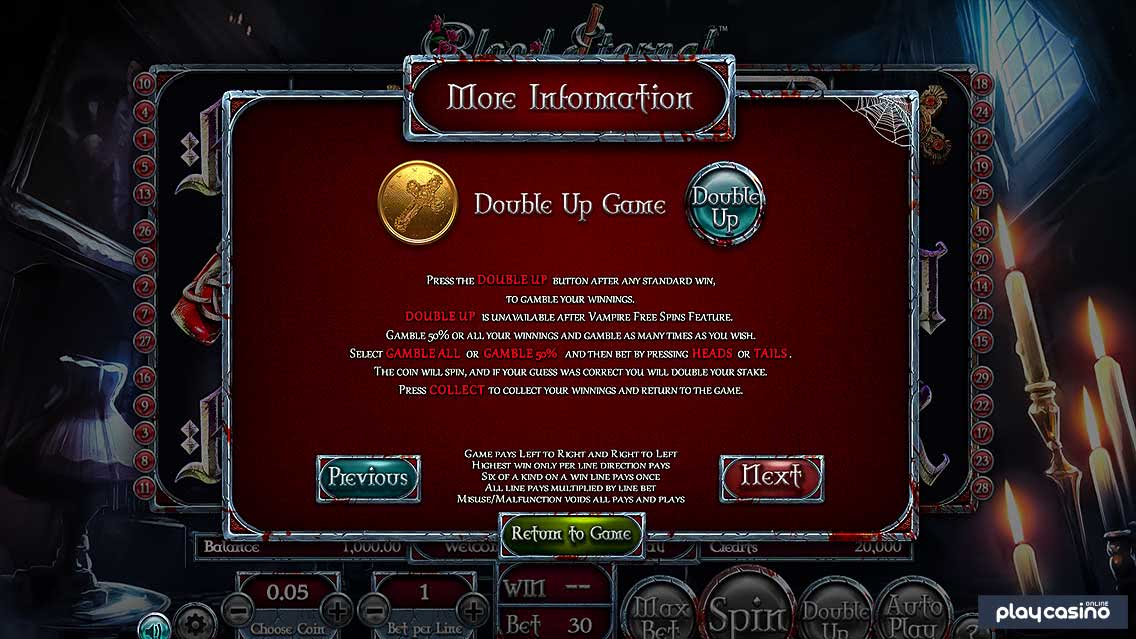 We want to start right off by looking at a free spins bonus feature. If you get a vampire symbol right beside of a human symbol on the reels, then you’ll be given a set of eight free spins. The two symbols that activated the feature are wilds during these free turns, and they are sticky for the entire feature. Moreover, if you get another pairing of a human and vampire like this during the free spins, you’ll have another eight added onto the total, and they will turn wild as well. 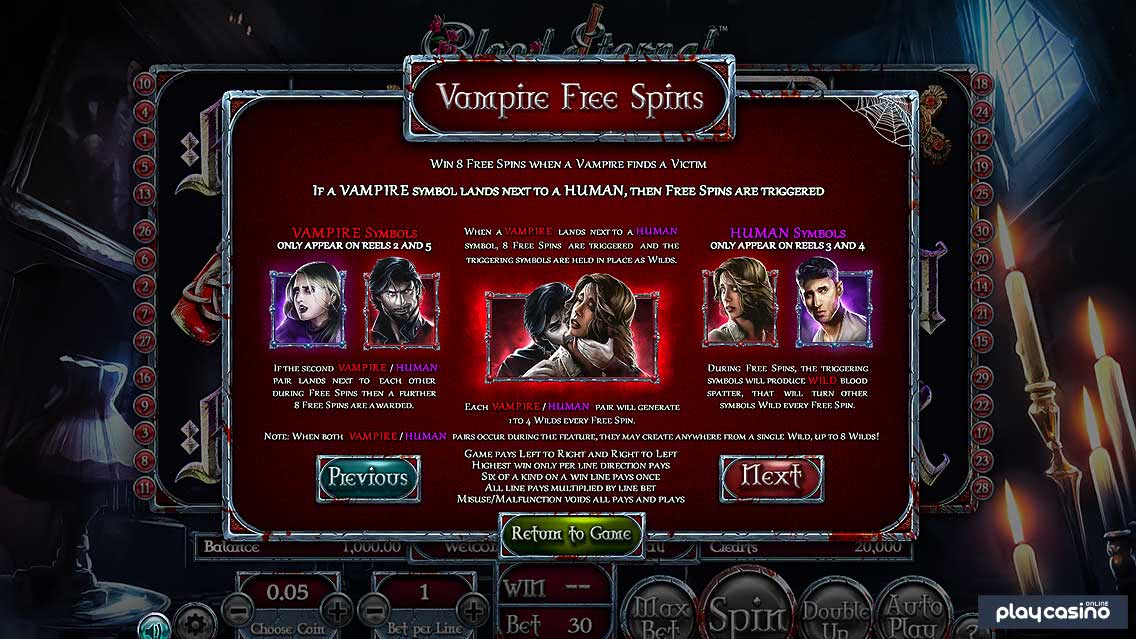 The human symbols only show up on the middle two reels (third and fourth), but you’ll get wild blood splatters from the vampires on the reels on every single spin during this feature, and those turn into extra wilds. These extra wilds aren’t sticky, but you will get them in different positions on every turn of this feature. That’s a prety reasonable source of value, and it adds a lot of excitement and more wild-based wins to this bonus round. 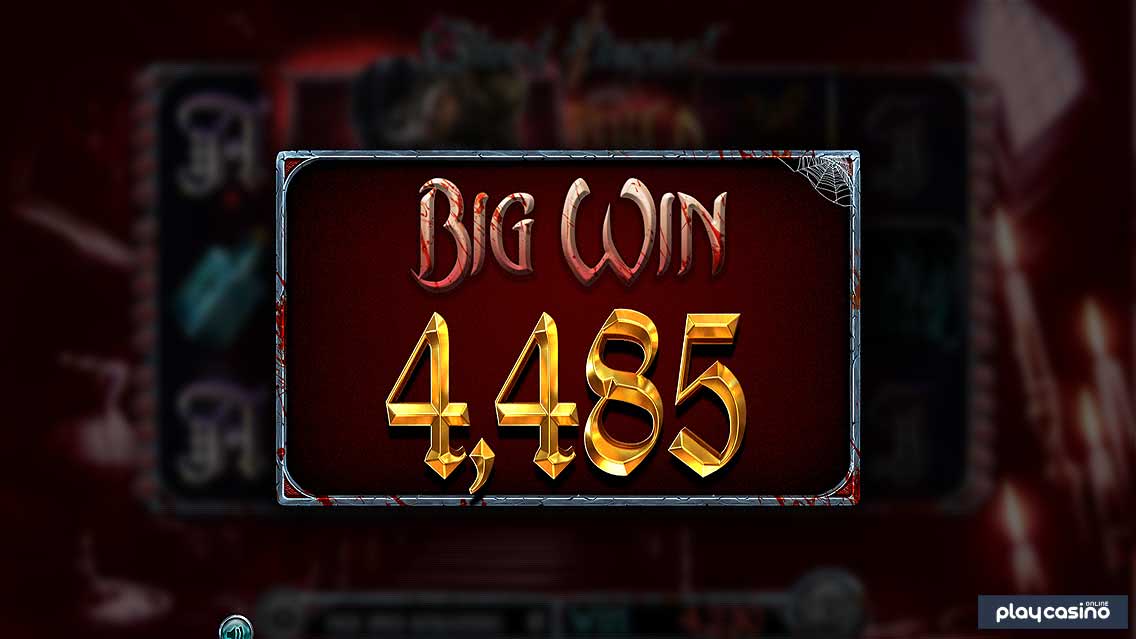 The main feature during the regular gameplay is based on the vampire bat symbols. They are designed to hit more often than the other payouts in the game, and they are also designed to give you bigger wins. In the Blood Eternal online slot, the bats can come in single or double symbols, and a double symbol counts for two positions on the pay table. What’s more is that you only need three of a kind for a bat win, so you could get that with a single bat and double bat from left to right or right to left on any of the 30 paylines. 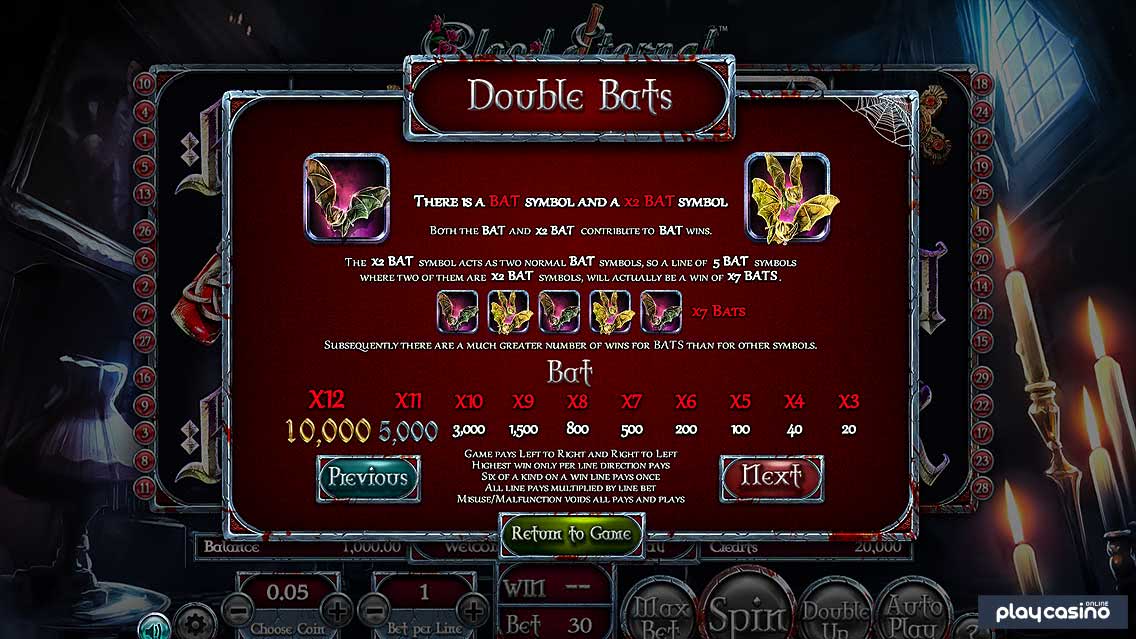 The wild symbol is pretty solid in this game because it gives you substitutions for every other symbols except for the vampires (on reels two and five) and the humans (reels three and four). Six of a kind of this symbol earns 750x, and five will get you 200x. You can also win 75x for four on a payline or 20x for three on a line in either direction.

When a wild symbol substitutes for a bat, it only counts for the single bat symbol. That’s a bit of a shame, but we can see how the Blood Eternal video slot would become a bit overpowered if it counted for the double bat considering how huge the top jackpot is for six of that symbol.

Five different high-end symbols give players a pretty good value. You can earn a 500x payout for six of a kind of the green scene with the castle and the gate. The gold and red cross pays out 400x for six of a kind, and you can also get 300x for the gargoyle on the blue background. The blood bottle of holy water and the red and gold vial of blood will give you 150x and 120x, respectively, for six of a kind. The value drops off a bit here, but it’s still balanced enough to keep the volatility in check. 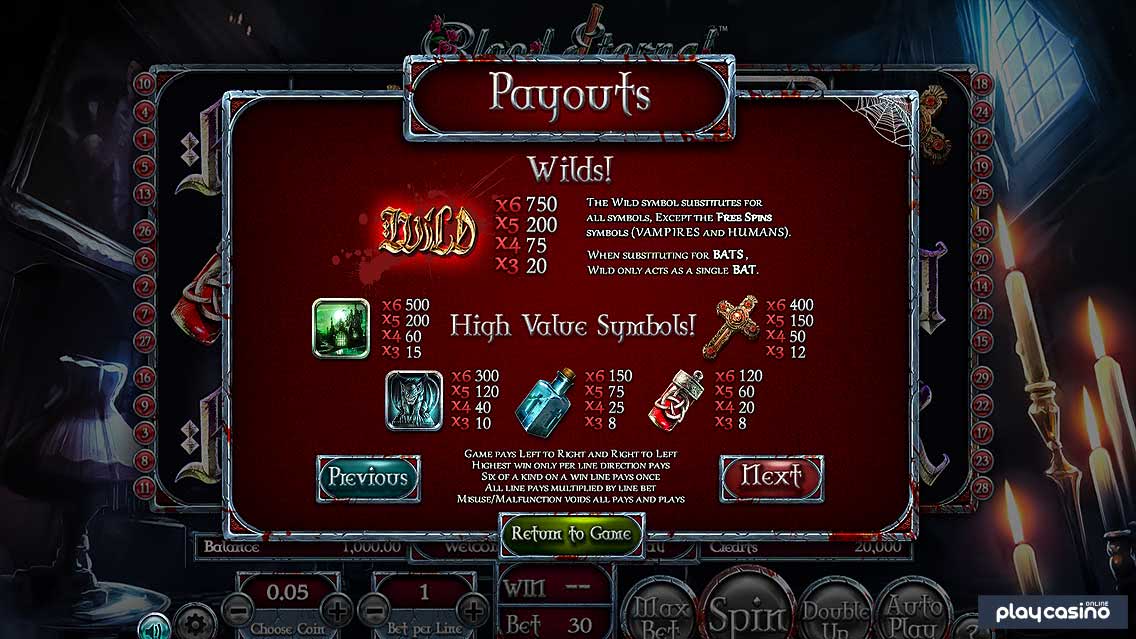 We typically don’t think card rank symbols are a good idea in most games, but they work out decently in the Blood Eternal online slot. Like all of the other regular paying symbols, you can win with three of a kind or more in either direction on any of the 30 paylines with these symbols. Six of the A or K pay out 30x, and you’ll pick up 20x for five of the Q or J symbols. They’re presented in a bold, Gothic font in a silver and black theme that fits the visual motif of the game as a whole. 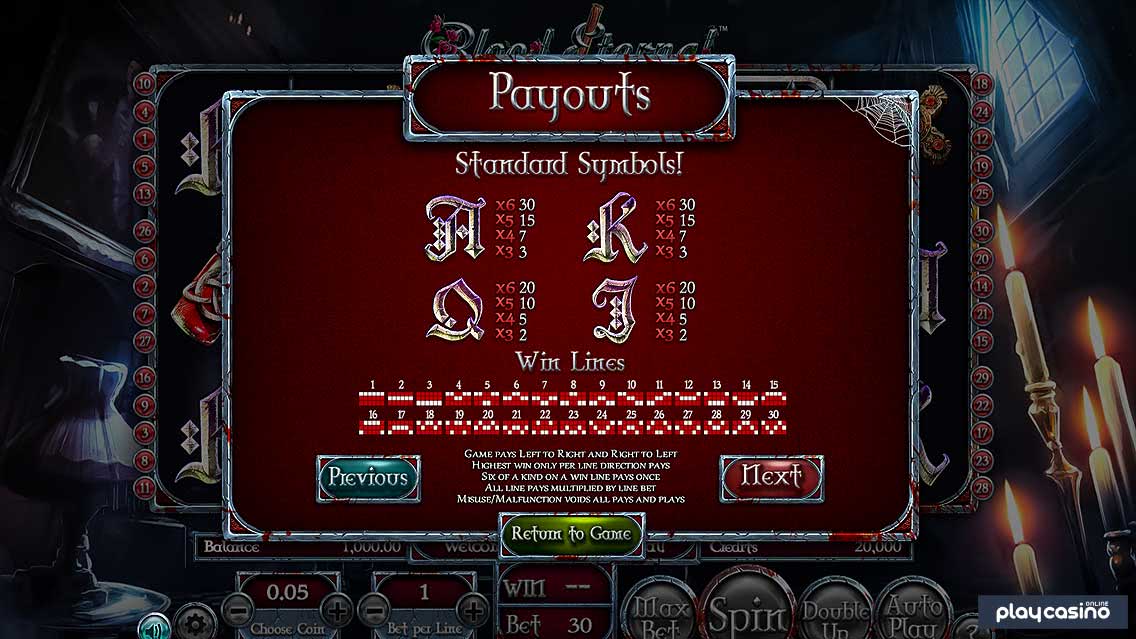 With the Blood Eternal online slot by BetSoft, they’ve made a pretty dramatic statement with a vampire-based romance theme. This theme is not uncommon in the slots world, and it seems like just about every developer has one. With that having been said, they’ve made their version stand out in just about every way possible from the huge top jackpot to the double bat symbol and the free spins mode based on someone being attacked and turned into a vampire with lots of extra wilds. It’s hard to beat the combination of strong gameplay and graphics that you’ll find here for any title out there today, especially games that use a vampire theme, and we don’t hesistate to say that this one is definitely at or near the top of the sub-genre.