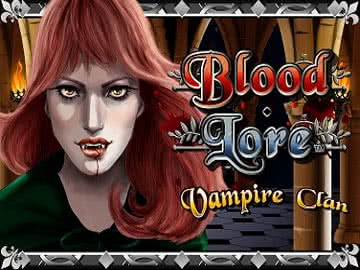 The Bloodlore Vampire Clan slot by the NYX Gaming Group has a chilling vampire theme with free spins, wild multipliers and many ways to win big.

Since the original Dracula novel, vampires have been a big part of the horror side of various forms of media. Their mythology has changed only slightly since that original character was formed, and the NYX Gaming Group has taken advantage of our apparent obsession with these creatures of the night with their Bloodlore Vampire Clan slot. This game combined a thrilling vampire theme with action-focused gameplay, and that’s a combination that has kept players coming back to this game over and over again since it was first released.

For this game, NYX used a fairly standard format. There are five reels and three rows of symbols, and players have 20 paylines to use to try to hit winning combinations. Betting is set up so that you’re always wagering exactly one coin on each payline, and this simplifies the process of picking out your preferred wager. Players are given the choice of picking their specific number of paylines, however, but we strongly suggest that you keep that number at 20. To play with fewer will lower the RTP and increase the house edge, so just pick a smaller coin size instead if you’re wanting to play for less money.

The vampire queen is the wild symbol in the Bloodlore Vampire Clan video slot, and she is probably the single most important symbol in the entire game. First off, she shows up on every reel, and she gives you opportunities to win the biggest regular payout available in the game. This comes by way of her five-of-a-kind payout of a pretty large 5,000x. Four of a kind is also worth 1,000x, which is larger than the top win in many online slots as well. For three of a kind, you’ll win 100x, and you can also earn 10x for two of a kind.

To further the value that you get from this symbol, she’s a 2x wild multiplier. That means any winning combination that uses at least one wild symbol gets its prize multiplied by a factor of two. It’s not hard to imagine why this provides so much value in this game, especially considering she appears on all five of the game’s reels.

There’s a symbol that shows a full moon with some tree limbs and a bird in front of it, and that’s the scatter in this slot. Much like the wild symbol, this scatter is one of the two most important symbols in the game, and it’s responsible for some pretty significant payouts. It also appears on all five reels, but you get wins for it no matter where it appears, which makes it easier to get scatter wins than other types of payouts.

Five of this moon scatter symbol earns you a win of 100x. Four pays 15x, and three gets you 5x. Two of a kind is worth 2x in this game. Keep in mind that unlike all of the rest of the payouts in this game, all of the scatter wins are based on a multiple of your total bet size for the spin. This means that the five-of-a-kind prize is like a 2,000x line bet, making it the second-largest prize in the game.

The main bonus feature in this game centers around a set of free spins. The moon symbol triggers these free spins, which makes sense considering the theme of the Bloodlore Vampire Clan slot. Three of a kind or more of the scatters anywhere on the reels will give you a set of free spins, and the number of free turns you’ll receive for the feature is four times the number of moons that trigger it. This means you can win 12, 16 or 20 free spins for three, four or five scattered moons, respectively.

During these free spins, you’re given a 3x multiplier on all of your prizes. While that’s quite a bit of value in and of itself, it’s made even more impressive by the fact that this can combine with the multiplier from the wild vampire queen to give you 6x total multipliers. If you make a winning combination that includes at least one wild symbol during the free spins, your multiplier will be 6x, which means major value coming your way.

There are four symbols that make up the higher level of wins just under the scatters and wild symbol payouts. The first symbol to pay attention to is the set of three vampires. Five of this symbol gives you a win of 1,000x. You can also take down 250x for five of the vampire temple symbol. There’s a 200x win for five of the pendant or five of the pistol as well, and what you see is that there are some mid-level wins to go along with all of the big four-figure payouts as well.

The lowest level of the pay table consists of six different card rank symbols that are set up in a style that really fits the vampire theme. The purple A and the red K symbols each give you a win worth 150x for five on a payline. For the orange Q and blue J symbols, the payout is worth 125x for a five-of-a-kind win. Finally, you have the yellow 10 and green 9 symbols, each of which pay out 100x for five on an activated payline. You’ll notice that even the lowest five-of-a-kind pays are in the three-figure ranch, and this avoids situations where players are resentful after hitting a long combination only to get a small payout, which is unfortunately something you see in several games.

The Bloodlore Vampire Clan video slot by the NYX Gaming Group uses a combination of a classic horror theme with a popular style of slot gameplay to give players a title that they have been coming back to over and over again for quite a while. The gameplay itself is what really stands out here because, even though the graphics aren’t terrible, they also aren’t up there with the best that the industry has to offer. Players in general don’t care so much about that as long as it’s full of action and fun to play, and that’s exactly why this game has remained so popular for so long in spite of its graphical limitations.