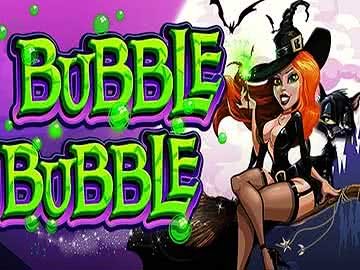 Bubble Bubble is a video slot produced by Realtime Gaming that offers 50 paylines of action with free spins and tons of other spooky features.

Realtime Gaming is known for producing a number of games based on different holiday themes. One of the most popular of that genre is Bubble Bubble, a video slot that centers around the doings of a sassy witch. You’ll see all kinds of Halloween-themed symbols and features on the reels of this game, and you’ll find that the action is particularly high-paced with a lot of paylines and a high level of volatility that produces some serious swings. This is a title that also has some pretty strong graphics with a fun and nice-looking animated style that looks like something out of a high-end animated film.

Format and Layout of the Bubble Bubble Slot

To have a game in the video slot genre that gives you a ton of action, it has to start with the format that the game uses. You’ll see that there are five reels and three rows, which is as normal as they come, but this game also has 50 paylines. That’s quite a bit, and it’s actually the most you’ll normally see before a game switches over to the “all ways” approach that creates its own particular playstyle that’s different than the more typical payline-based games.

Players have betting options that start at $0.50 with all paylines activated, and that runs up to the $12.50 level. This is a pretty wide range of bets that will provide appropriate wager sizes for virtually anyone at any level of stakes. Some players may be tempted to make the minimum bet size even smaller by playing with fewer than the maximum of 50 paylines, but it’s better if you don’t. If you aren’t comfortable with playing for $0.50 per spin, then you should find another game instead of dropping the number of paylines because you’ll kill your RTP that way in this particular game, and that’s the last thing that you want since it means you’ll have worse chances of winning overall. 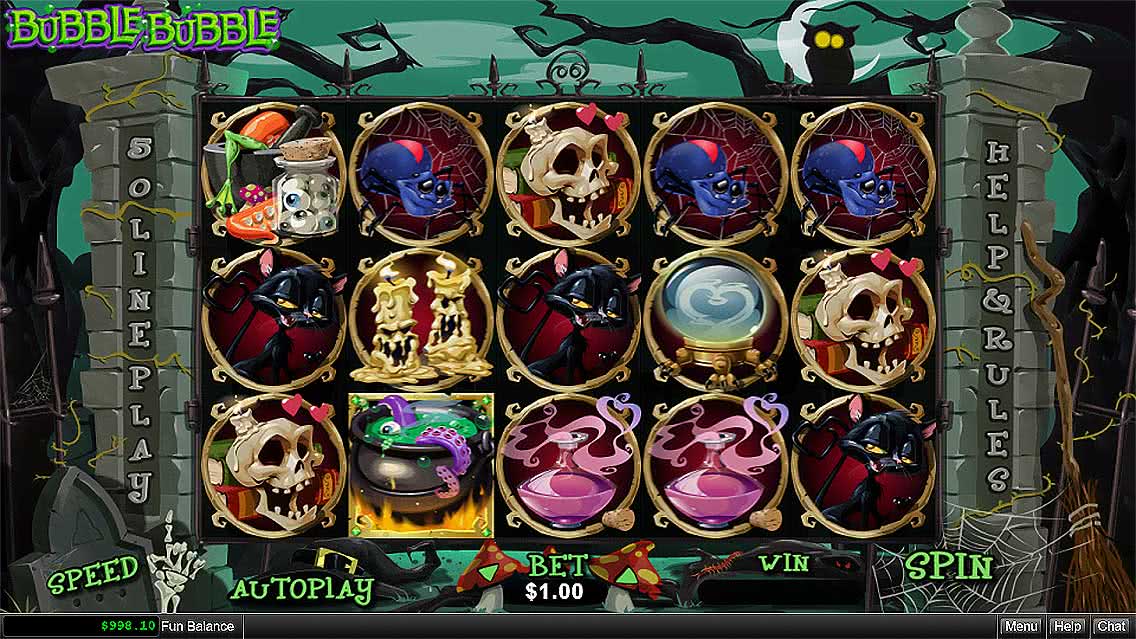 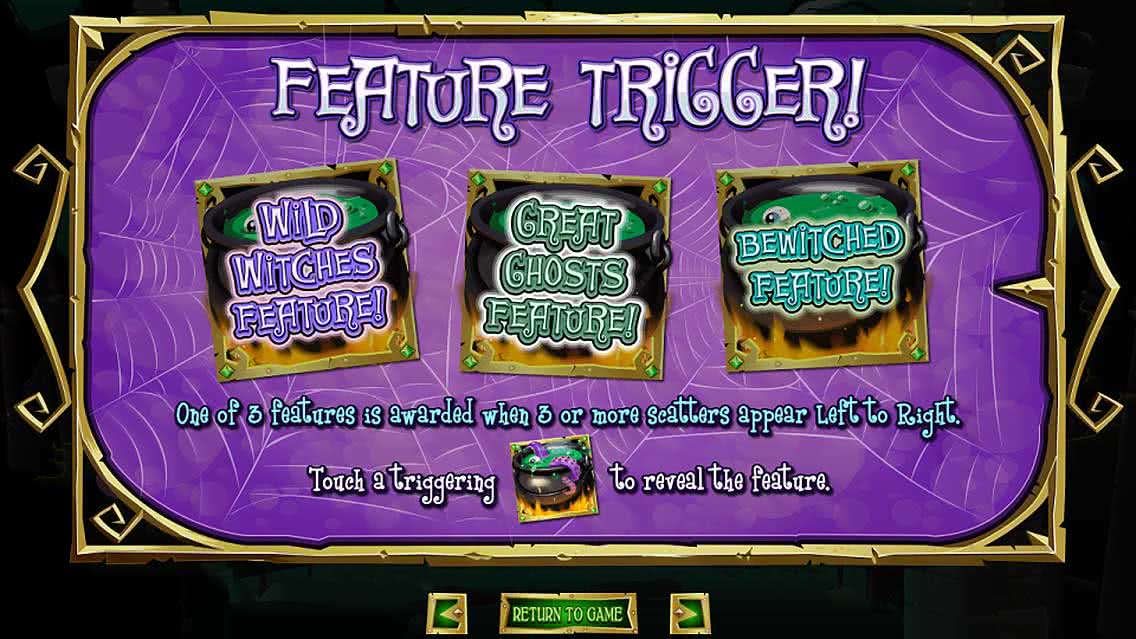 The witch Winni shows up on the center reel, and she sits on a funny headstone that reads, “One Wild Witch.” She always expands to cover the entire reel before any payouts are given, and she also gives you an opportunity to get bigger payouts. She does this by acting as a 3x wild multiplier. Any win that includes Winni the witch will be multiplied by a factor of three. Note that she also substitutes for the scatter, which is not typical, but that just makes it even easier to hit scattered payouts, which also receive the 3x multiplier from the wild. 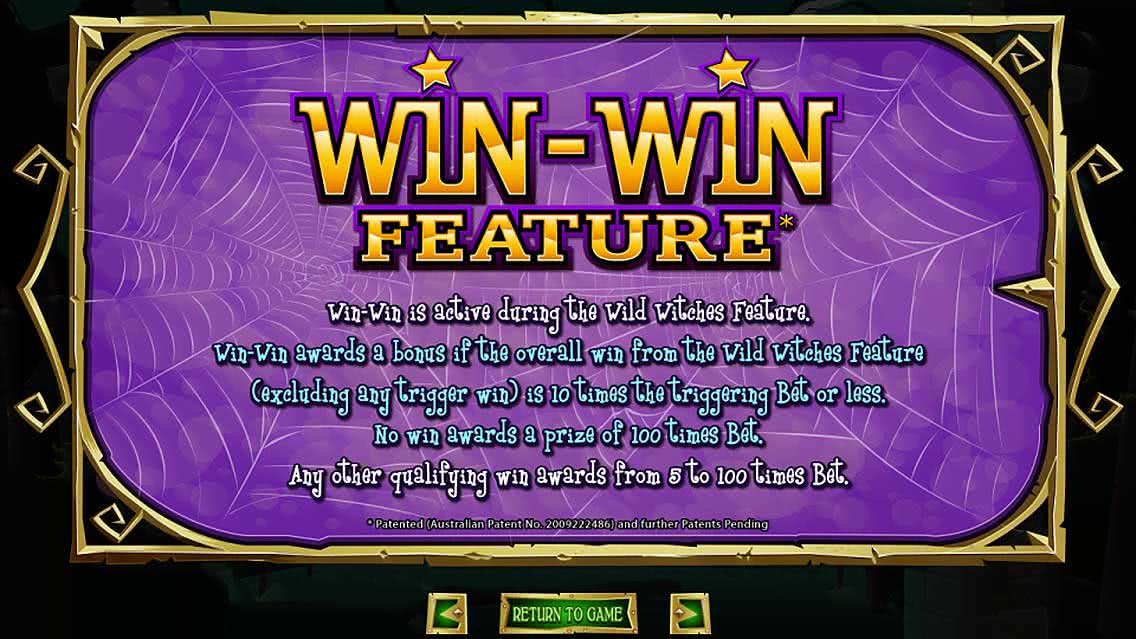 Because the wild Winni symbol substitutes for the scattered cauldron symbol, it’s much easier to get scatter pays than in other games. In fact, you only need two of a kind for a payout from this symbol to get a win, but they have to occur from left-to-right on the reels. Five of a kind earns 33x, and four gets you 6x. You can win 3x or 2x for three of a kind or two of a kind, respectively. Each of these four scatter payouts are multiplied by your entire wager, so you can multiply them by 50 to see what they will be like as an equivalent payline-based wager. For example, five of a kind gives you the same payout as a payline win of 1,650x, and that jumps up to 4,950x if the game’s wild symbol is included. 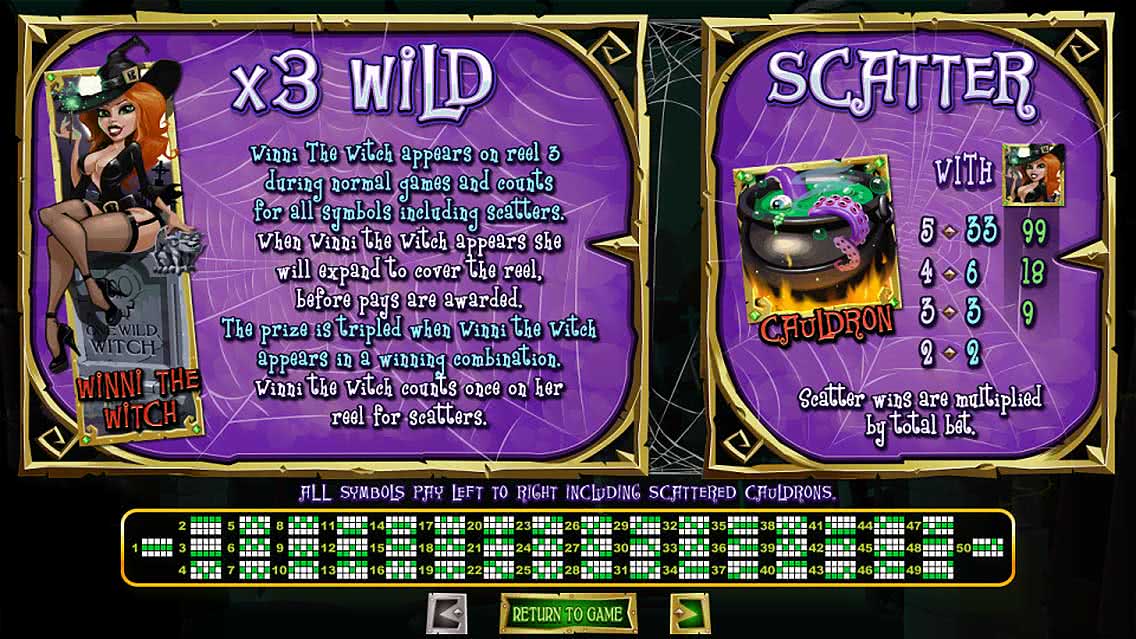 When you get three of more of the cauldron scatter, you’ll get one of three features at random. The first is the Wild Witches feature. You get nine free spins on this feature, and Winni appearing on the third reel gives you a special spell. She casts a spell that has her show up on one or two of the other reels at random, and that will turn those reels completely wild as well. You can re-trigger the feature with three or more scatters to add more free spins, but Winni will only count as one scatter. Any scatters covered by the additional Winni wild symbols are counted towards re-triggering the feature, however. 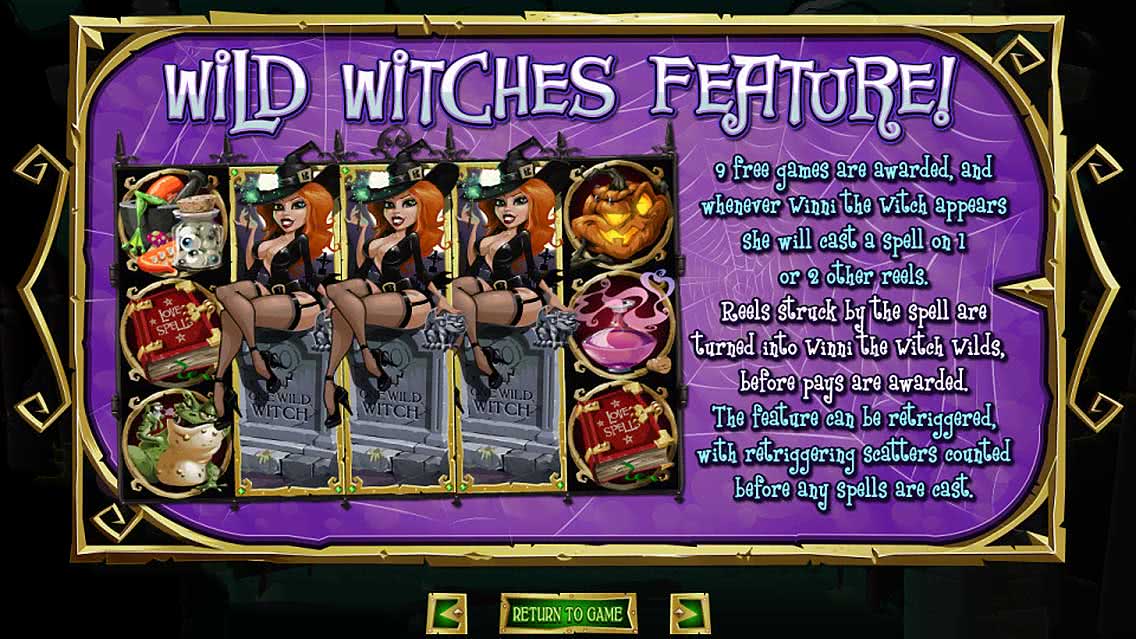 Since the Bubble Bubble video slot takes place in a graveyard, it makes sense that there would be ghosts on the reels. You’ll get a set of 20 free spins in this feature, and after every scatter win you get during this bonus round, up to nine wild ghost symbols appear on the reels at random to give you an extra chance to get big payouts. This wild ghost does not substitute for the scatter, and the scatter wins are paid before any other payouts are given when this feature hits. This is a great feature that adds opportunities for multi-lines and better chances for huge five-of-a-kind payouts that give you a tremendous amount of value. 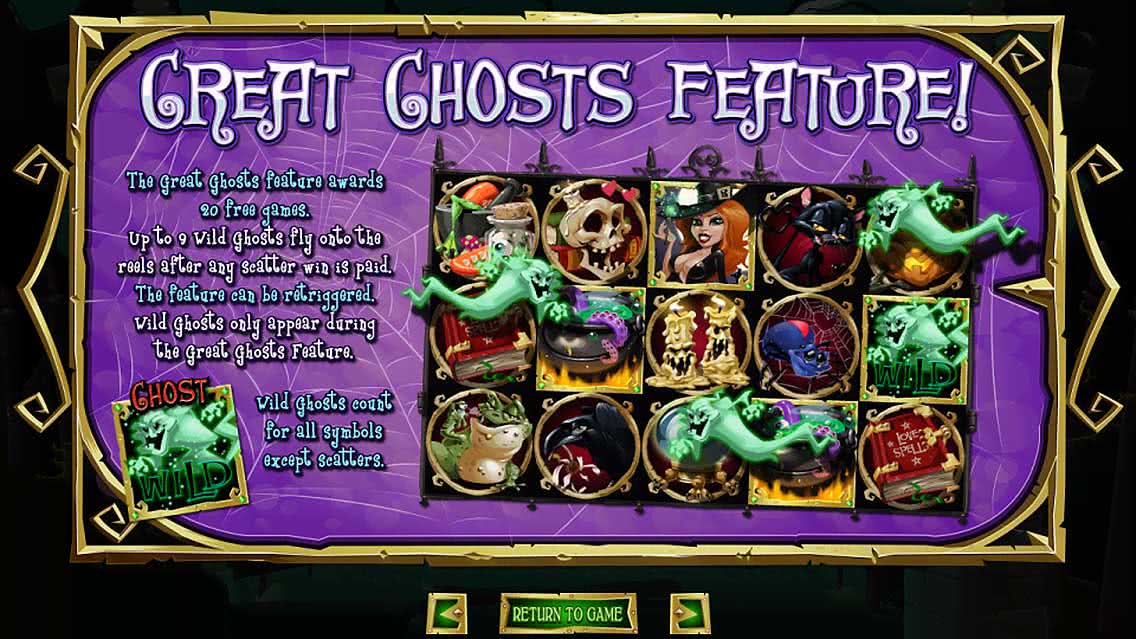 The Bewitched feature is the third bonus round of the Bubble Bubble online slot that you can trigger with three or more of the scatter. In this feature, the middle reel has Winni on it for every single spin, and you get seven free spins. On top of that, you can also re-trigger the feature to get even more turns with the entire center reel wild. It’s easy to see why this feature packs a lot of opportunities to get paid since you only need two of a kind on the first and second reels to get paid in a major way. Having 50 paylines on each spin makes it even that much more valuable. 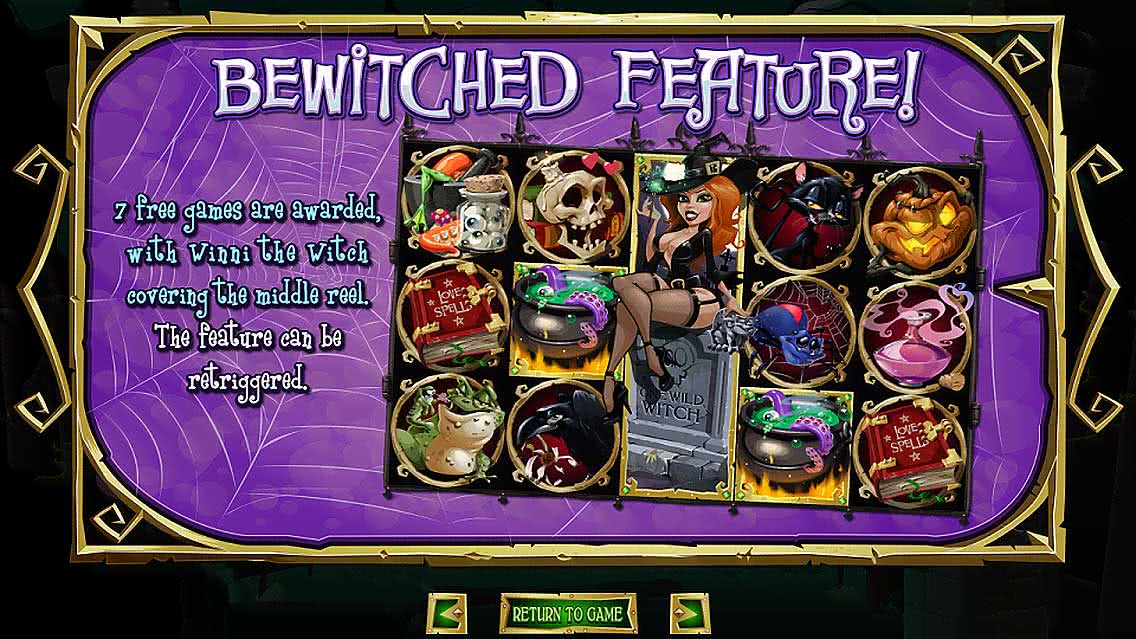 Five of the cat gets you 1,000x, or 3,000x with Winni. You can earn the same payout for five of the black raven. Five of a kind of the large frog gets you 333x, which triples to 999x with a wild symbol. Finally, you have the spellbook and the jack-o-lantern, each of which gives you the same 333x and 999x payouts for five of a kind.

On the bottom end of the pay table, there are two tiers of symbols with three symbols on each tier. First you have the 150x payout tier that consists of the crystal ball, the purple potion and the jar full of eyeballs. Five of any of these gets you 150x, which goes up to 450x with a wild symbol. Finally, five of the candles, spiders or skulls gets 99x, which is 297x with the wild multiplier. 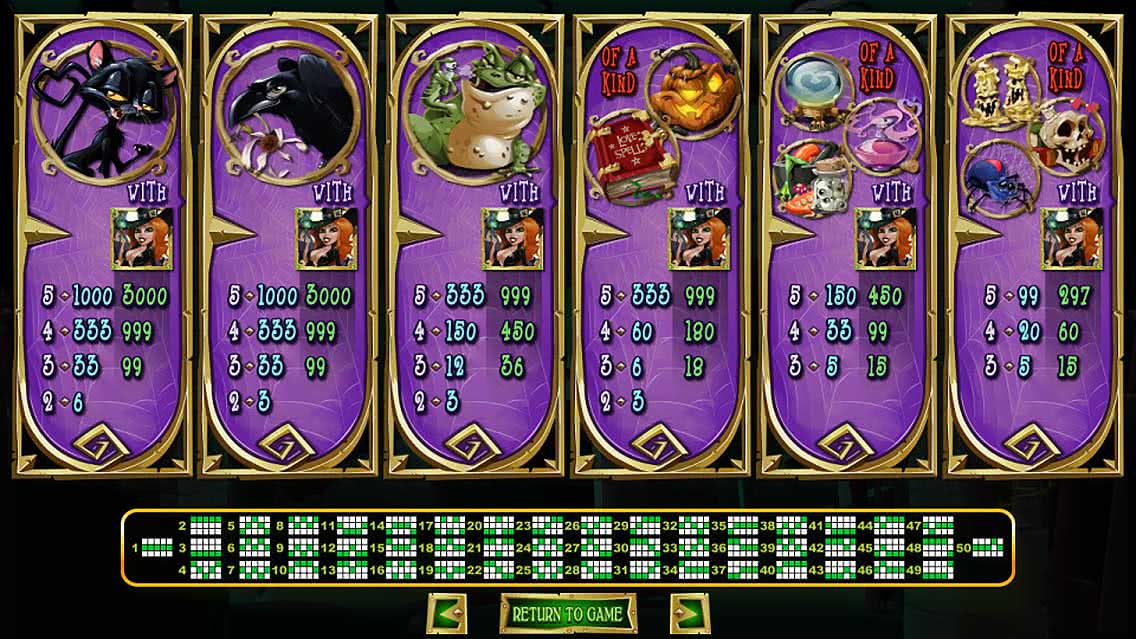 Bubble Bubble is probably Realtime Gaming’s most popular video slot that’s based on a holiday, and that’s impressive considering the fact that they have several of them to choose from. It’s one of those things where the game itself is very good, but it gets lumped in with a lot of other titles with somewhat similar themes. It stands out quite a bit, but it will mostly appeal to players who like high-volatility gameplay and who do not mind the seasonal motif of the game.