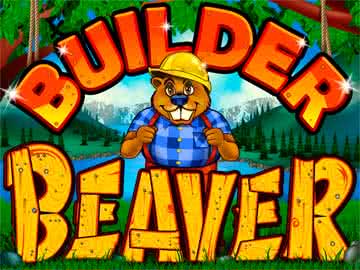 If you’re a fan of video slots by Realtime Gaming, then you must have heard of Builder Beaver. It’s one of their most iconic and well-known games because it’s build on such an off-the-wall theme combined with top-tier gameplay. It’s completely packed with features, and it showed the world on its release that RTG didn’t need any big fancy media brands or other goodies to make a game that players fell in love with.

The format of this game is designed to give you plenty of ways to win without putting you in a situation where there are too many winning ways to keep up with. It has five reels and three rows, which is normal enough, and there are 25 paylines that pay from left to right only. This is a very solid foundation for a game, and with the Builder Beaver slot, it’s used to house a number of ways to win big prizes and pick up extra payouts from bonus features.

Betting is made as simple as possible in this game. While you could play with fewer than 25 paylines if you were so inclined, you should keep all 25 of them activated so that you have the best RTP percentage possible. Coin sizes vary from $0.01 to $0.25 each, and since you can only bet one coin per payline, this gives you a range of bet sizes that starts at $0.25 and that extends upward to $6.25 per turn. 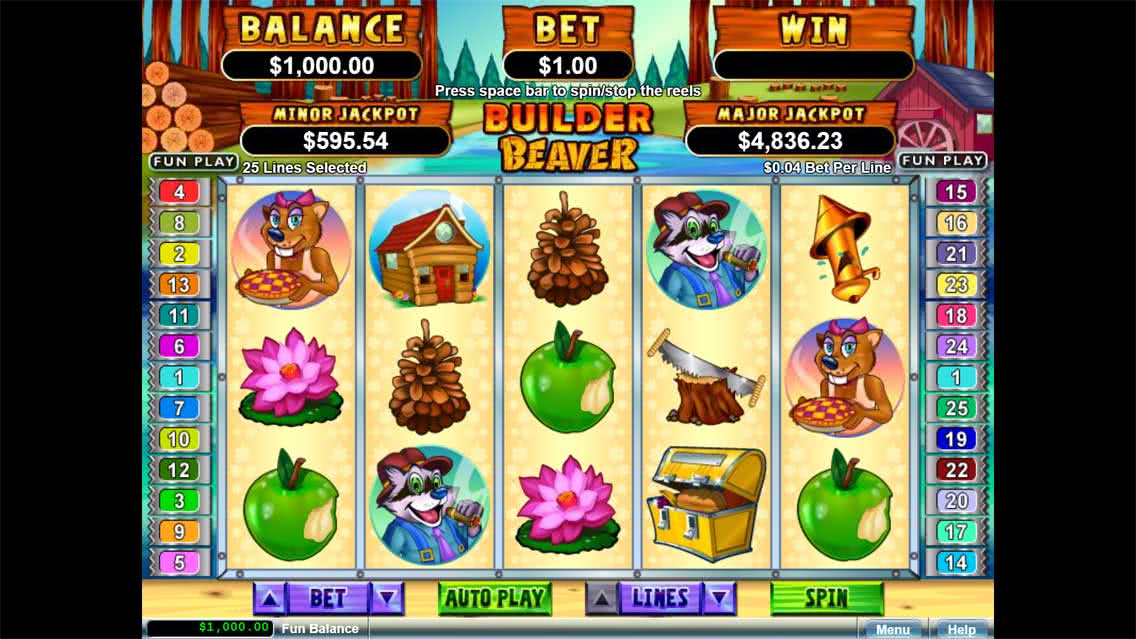 Easily the most important symbol in this game is the Builder Beaver himself. He shows up in a blue, plaid shirt and a yellow construction hard hat. Five of a kind of this symbol on an activated payline will give you the top regular jackpot of 10,000x. Four gets you 1,500x, three pays 150x, and you can also pick up 15x for just two of a kind. It will substitute for anything in the game except for the scattered sign symbols that we take a look at below.

The Beaver Logging Company has signs that show up on all of the reels, and they are the scatter symbol in this game. They give you payouts that are multiplied by your entire bet size with the highest being 200x for five anywhere on the reels. This is like a 5,000x line bet win, making it one of the largest pays in the entire slot. You’ll get a payout for two of a kind or more no matter where they are located on the reels, so it’s pretty easy to run up some pretty tremendous wins with this scatter.

The scattered company sign is one of the two symbols that help you to get a bonus feature in this game. Pick up three or more anywhere on the reels, and after you are given your scatter wins and any other payouts on the board, you are given a set of 10 free spins. During this feature, you get a 2x multiplier on all of your payouts.

In addition, every single sign symbol that shows up on the reels during this free spins bonus round will act as an extra wild after the scatter wins are paid out. If you get three or more again, you’ll be given an additional 10 free spins, so there are ways to re-trigger the feature and get even more free turns.

In the Builder Beaver video slot, you have another way to get a free spins feature. Three or more of the beaver wild symbol anywhere on the reels will act as a scatter for the purposes of giving you a bonus feature. These free spins are hit with a 3x multiplier, and you’ll be given 12 of them at a time. Unlike the sign-based free spins feature, this one cannot be re-triggered. With that having been said, it’s still a tremendous opportunity to get some pretty big pays because of the larger multiplier. 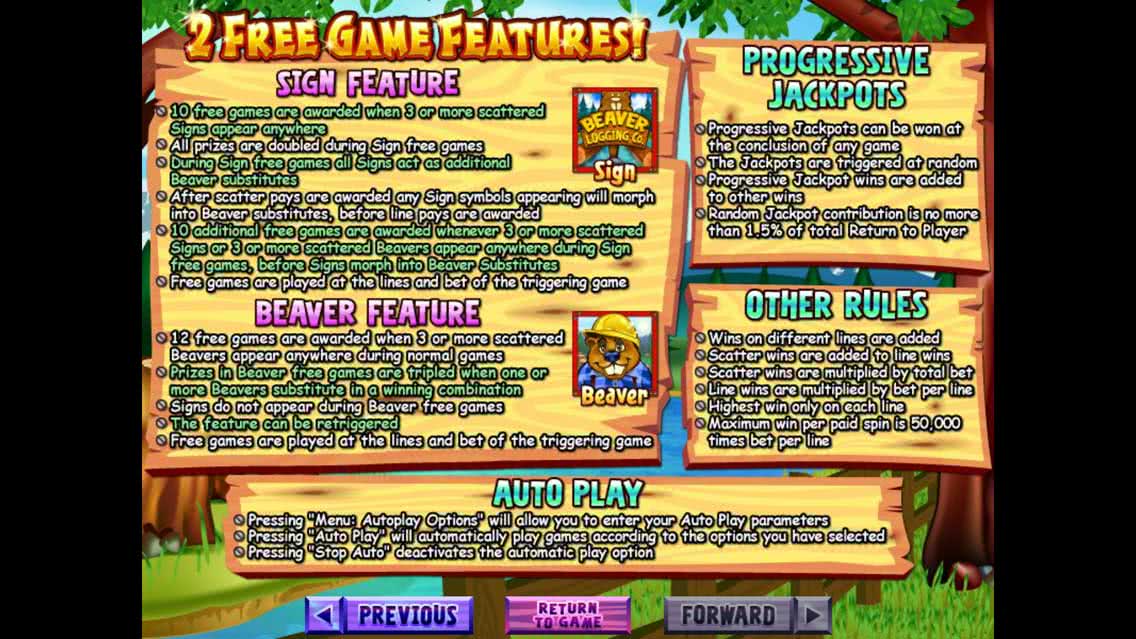 As a part of the Real Series, the Builder Beaver online slot has two different progressives. These start off at $1,000 and $250 each, and they get bigger and bigger until they trigger at random. Something really cool about how this works is that you have a chance to win the progressives no matter how much you wager. However, the chances of winning are scaled according to your bet size to make things fair for players at all stakes.

To give a quick example of how this works, the jackpots are triggered at random after any given spin, and they don’t need any particular winning combination or other combination of symbols on the reels for players to win. Moreover, a player who wagers $2 per spin will have twice the chance to win them than the player who bets $1 per spin to keep things fair from that perspective.

The Builder Beaver slot has a ton of ways to win payouts that would be around the same size as the top jackpots in other games. Five of a kind of the lady beaver holding a pie gives you a massive 5,000x payout. A pretty large 3,000x win is yours if you can get five of the cabin on an activated payline. Likewise, five of a kind of the bear symbol is worth 2,000x, and you can win 750x for five of the raccoon.

It’s also important to note with these symbols that all four of them pay for just two of a kind or more. This is just like the wilds and the scattered sign symbols, and it’s a key characteristic of this game that more symbols pay for two or more than those that require three or more.

Minor Wins and Other Payouts 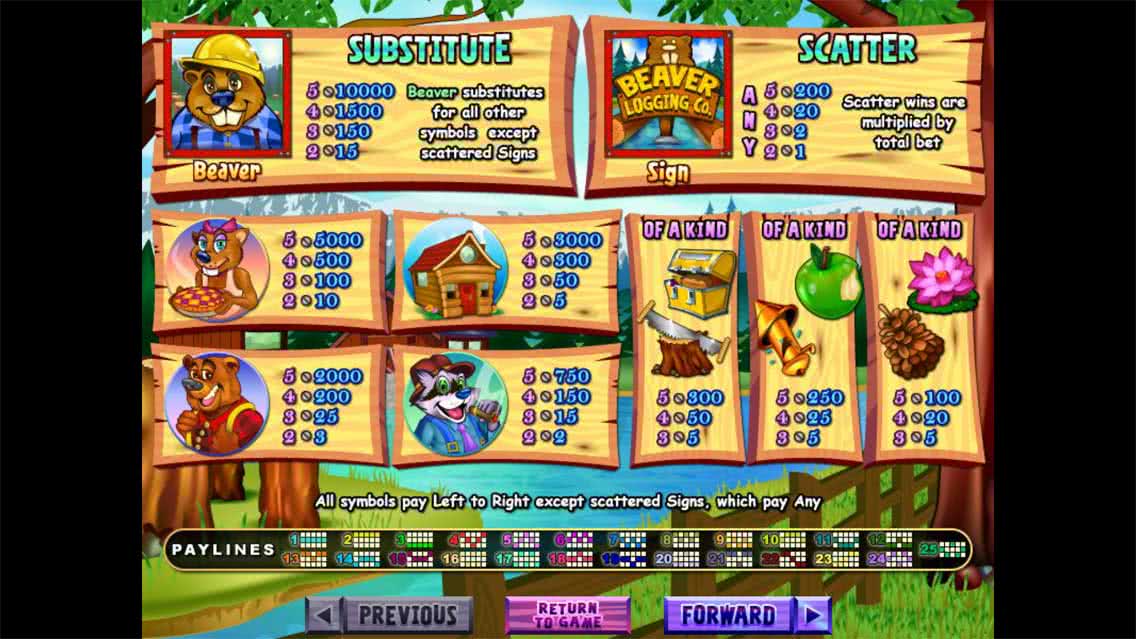 The Builder Beaver slot is an iconic title by Realtime Gaming. It’s so popular that many RTG casinos still offer free spins on this slot as a promotion for new and existing players despite the fact that it’s an older game. It is completely jam-packed with features and ways to win pretty big payouts, and that is exactly the type of thing that will keep players coming back for more over and over again in the online slots industry.