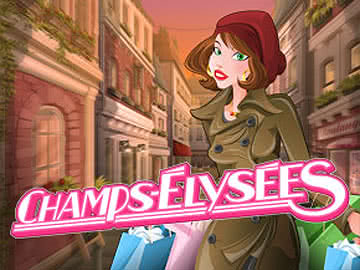 Based on a Paris, France shopping theme, Champs-Elysees gives players 50 paylines of action with expanding wilds and a free spins bonus feature.

Champs-Elysees is a game produced by Rival Gaming that is based on a shopping trip theme in Paris, France. This is a somewhat atypical theme, but the whole setup is done very well visually with a sort of animated style and the shopping character herself on the right-hand side of the reels during gameplay. You can see the city in the background with a sort of downtown setting, and the reels are transparent enough that you can see that downtown scene through them. With the shopping theme and all of the pink symbols, it’s clear that this game was targeted towards the female audience, but many men will like it as well.

Format of the Champs-Elysees Slot

The format of this game allows for a lot of potential wins on each spin. This is because you’ll have 50 paylines to play with across five reels and three rows of action. This is close to the most paylines you can reasonably fit on a 5×3 slot layout without needing to add another row of symbols. Betting has two major options that you should manipulate including the ability to bet between one and ten coins on each of those 50 paylines. The coin sizes run from $0.01 to $0.25, so your total betting range goes from $0.50 to $125 for each spin.

During regular gameplay, there is one feature that drives the majority of what’s going on, and that’s the Eiffel Tower expanding wild symbols. Whenever you get one of these wilds, it expands to cover the entire reel. This wild shows up on the first, third and fifth reels only, and it will substitute for anything but the scatter symbol. To add to the value that you get from this wild, any winning combination that uses at least one of the wild symbols will be hit with a 3x multiplier.

It’s also worth noting that the positioning of these wilds is pretty important. For example, if you get the ones on the first and third reels at the same time, you would get winning combinations for every single one of the symbols on the second reel. Likewise, getting all three wilds on the screen at once would make it very easy to get five of a kind payouts. Our point is that you should not underestimate the importance of these wilds with the way they are set up across three reels to expand and give you a 3x multiplier.

There is a scttered bonus symbol that consists of a stack of postcards, and getting three or more of these will give you a set of free spins. Three of a kind earns 10 free spins, four of a kind pays out 20 free spins, and five of a kind gets you a whooping 40 free spins. These free spins don’t have anything extra added on, which is somewhat unusual for the genre, but with the expanding wild symbols already in play with multipliers, you don’t really need anything else added into the situation to get a very good value. This dynamic helps to lower the volatility a bit in spite of the ability to earn up to 40 free spins in the Champs-Elysees slot at one time.

The only thing added during the free spins is a chance to activate the Shopping Spree Bonus Feature. This feature is activated by three or more of the Paris map symbol. The way it works is that you are taken to a second screen where you will pick from different shopping bags to get instant wins that are pretty sizable. This basically amounts to a dressed-up random instant payout, but using the shopping motif for the feature fits in perfectly with the Paris shopping theme of the game as a whole, so we can’t blame them at all for using that particular visual representation of it.

The symbols for Champs-Elysees are broken up into a few different tiers, and they all fit into the theme of the game extremely well. At the top end of the pay schedule, you can get 1,600x for five of the purple shoes, and a 1,000x payout is awarded if you line up five of the designer bag on an activated payline. Players can pick up a solid 640x win for five of the box of chocolates as well. These wins don’t really drop off suddenly like you see with many games, which helps the volatility a bit.

In the middle range of symbols, you get the cheese with wine, which earns 400x for a five of a kind payout. The bread and soup symbol (which makes us hungry) pays out a very solid 320x payout win, and you can pick up 240x for five of the crepes. If you’re unfamiliar with crepes, they look like a thin, folded up pancake with whipped cream and a strawberry on top in this game, and all of that is on a white plate with chocolate sauce dripped all over it.

Wrapping things up at the bottom end of the symbol set are the six different card rank symbols. They are all colored and stylized in a pink and white motif that fits the theme of the game as a whole and matches the font used in the Champs-Elysees heading across the top of the game as you play. The A symbol gives players a 200x win for five, and five of the K pays 160x. You can get 140x for five of the Q or 100x for five of the J symbol. Players also have the 80x payout when they line up five of the 10 symbol on an activated payline, or you can make that 75x by getting five of the 9 accordingly.

Champs-Elysees is a good example of Rival Gaming picking out a theme that has not been used very much at all in the online slots world and building a game around it in a way that makes sense. Everything in this game ties into the Paris Shopping theme really well, whether it’s the Eiffel Tower expanding wild symbol or the Shopping Spree Bonus Feature found only in the free spins. Overall, this is definitely a game that will appeal more to the female audience to a certain degree, but the gameplay values will appeal to everyone.