Cleopatra’s gold is one of Realtime Gaming’s most popular titles with a progressive jackpot and free spins with multipliers.

In today’s online slot market, it can seem like just about every software developer has a game that’s based on some kind of Egyptian theme. Realtime Gaming’s Cleopatra’s Gold slot is one of the original titles in this genre, and it set a lot of the standards for it that you see in other games today. Its gameplay is based around giving players several ways to win impressive payouts, and there are lots of multipliers to make your prizes even bigger.

Format of the Cleopatra’s Gold Slot

As this is an older game, it makes sense that it uses one of the most common layouts for video slots ever used. There are five reels with three rows and 20 paylines. You do have the option to play with any number of paylines up to 20. However, we strongly recommend that you keep it at the maximum and use smaller coin sizes if you want a lower bet since playing with fewer than 20 paylines will decrease your RTP percentage and give you a worse overall payout rate.

Instead of having different sizes of coins and different numbers of coins that can be wagered on each payline, the betting is streamlined and made simpler than that. You simply choose between a variety of total bet sizes that start at the $0.20 level and that go up to $100 at the maximum. It’s easy to find a bet size that fits what you are comfortable with no matter how big or small your bankroll. 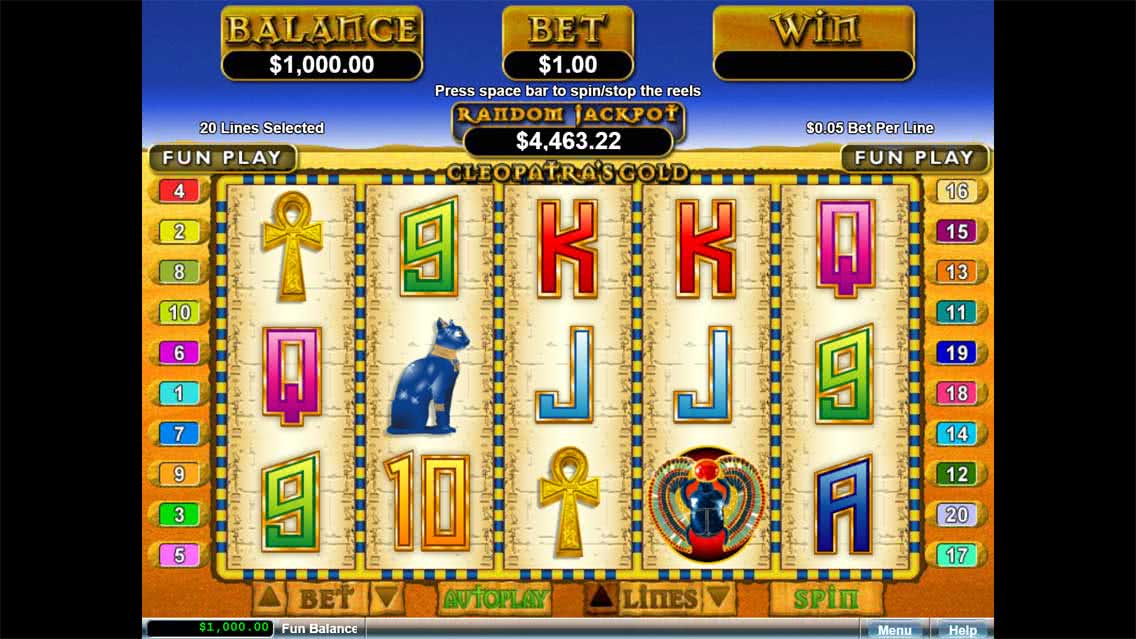 One of the main symbols you want to look for on the reels is Cleopatra herself, and that makes plenty of sense considering the game is named after her. Five of this wild symbol on an activated payline will give you a tremendous win worth 10,000x, the largest regular pay in the entire game. However, if at least one of this symbol appears as a part of a different winning combo, then it’s given a 2x multiplier. This leads to some tremendous payouts on the rest of the pay table as well.

You can pick up 2,500x for four of a kind of this wild symbol, and it’s 200x for three. You can win with just two of this symbol on a payline as well, and that will get you a 10x prize.

There is also a pyramid that shows up on the reels, and it’s the other of the two key symbols for the Cleopatra’s Gold slot. This is a scatter, and it pays out no matter where the symbols are located on the reels. Five of the pyramid anywhere on the game board gets you a payout worth 500 times your total bet. This is the same as a 10,000x line bet win, which is a tie for the largest payout you can get anywhere in the regular game mode.

Four of a kind earns 20x, and three gets you 5x. If you land just two of these anywhere on the reels, you’ll still get a payout of 2x. It’s clear that this symbol is responsible for a great amount of value in this game.

The scattered pyramid symbol also acts as a bonus symbol. Three of a kind or more anywhere will get you a payout along with a set of 15 free spins. All of these free spins are given a 3x multiplier on all of your wins. This multiplier stacks with the wild multiplier to give you total multipliers as high as 6x, so it’s clear that there are some major payouts waiting for you in this bonus feature.

To add even more value to this feature, it has a chance to be re-triggered. If you’re lucky enough to pick up three or more pyramids again while you’re in the middle of free spins, you’ll get your scatter payout in addition to another 15 free turns that will be added to your total. 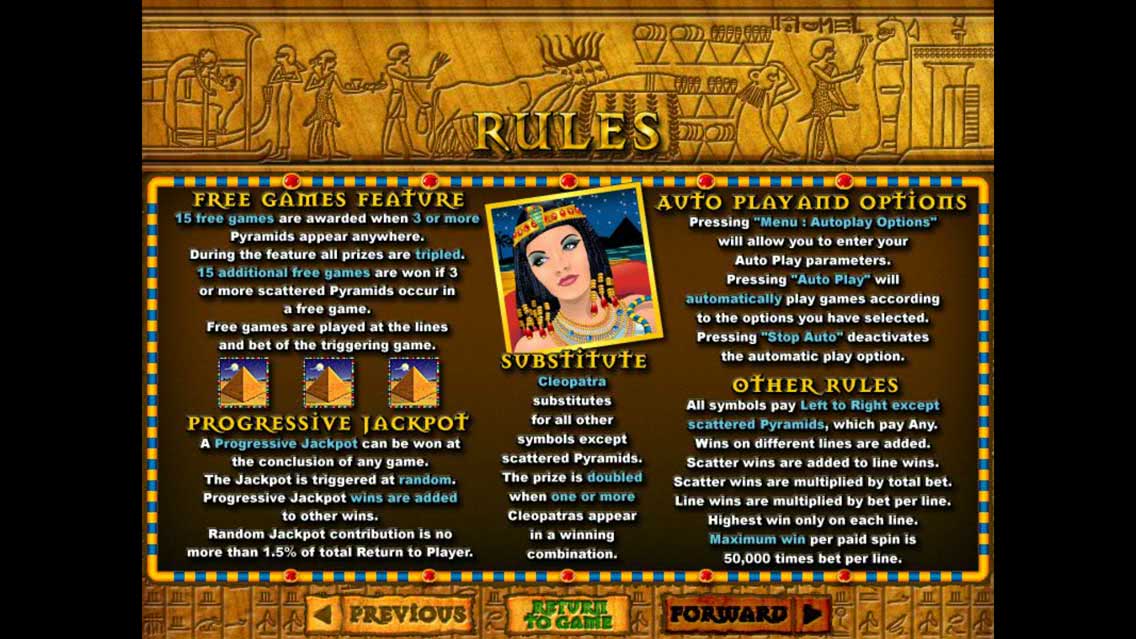 The Cleopatra’s Gold video slot is a part of Realtime Gaming’s Real Series of slots. One feature that all of the games in this series have is a random progressive jackpot. This jackpot starts out at the $1,000 level, and it gets bigger over time until someone wins it. Once it’s won, it starts back over at $1,000, and the process repeats itself.

You can win this jackpot with any bet of any size in this game. This is because it’s set to trigger at random after any given spin. You don’t have to hit any particular set of symbols or conditions on the reels to win this prize. Your chances of winning it are adjusted for fairness based on your bet size, but everyone has a chance to win it.

On the regular portion of the pay table, there are four different symbols with an Egyptian theme that pay out pretty well. Five of the vase will get you 1,000x, and that jumps to 2,000x with at least one wild. Five of the eye gets you the same payouts of 1,000x or 2,000x with a Cleopatra wild. Wins of 300x (600x with a wild) are given for five of the cross symbol or of the cat symbol. These are some pretty good wins, and you can see that the pay schedule is structured so that it drops down gradually from one level of prizes to the next. This prevents there from being a huge drop in payouts.

There are six different card rank symbols used in the Cleopatra’s Gold online slot, and they have some pretty decent payouts, especially when you consider the chances of winning double with the wild multipliers. The blue A gets you 150x or 300x with a wild, as does the red K symbol. The orange Q and green J symbols are good for 125x (250x with a wild). The lowest-paying symbols in the game are the 10 and 9 symbols, which are yellow and green, respectively. They will get you 100x for five without a wild, but it doubles to 200x if a wild is a part of the winning combination.

These are very fair and balanced payouts for the low-end symbols, and they show that you’ll have a chance to win something significant with all of their five-of-a-kind winning combinations. 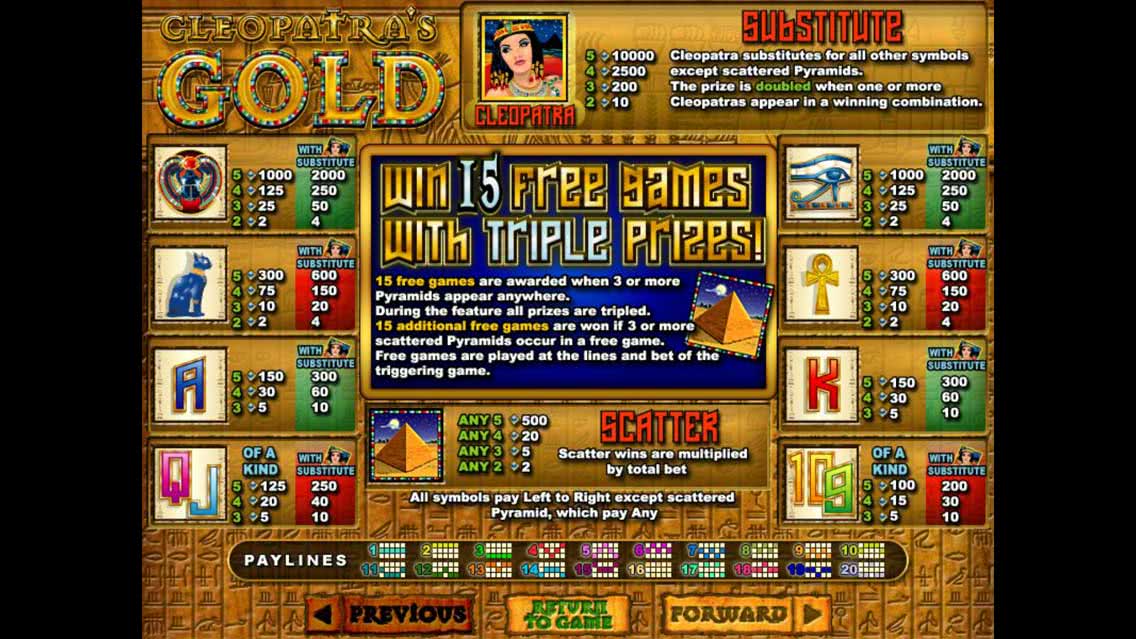 The Cleopatra’s Gold video slot is one of Realtime Gaming’s most popular titles for several reasons. While it doesn’t have the best graphics out there today, it does have gameplay that has maintained its edge against the competition for a very long time. You’ll be hard-pressed to find a game in an older slot genre that has maintained its popularity over time as much as this one has, and it’s because of all of the different ways you can get major payouts.