Cream of the Crop Slot 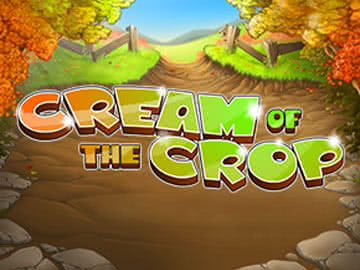 The Cream of the Crop slot by Rival Gaming features expanding wilds, an instant win game and a high hit-rate.

Many online slots center largely around their bonus features. This is great if you prefer that style of play, but not everyone does. For people who would rather get most of their value from the regular pay table, Rival Gaming created the Cream of the Crop slot. This video slot does have an instant win-based bonus feature, but most of the gameplay centers around getting payouts from the regular pay table thanks to the high hit-rate the game has.

Format and Layout of the Cream of the Crop Slot

The layout of this game is a 20-payline video slot. It has the typical video slot format with five reels and three rows as well. Much of this game has been made as standard and simplified as possible so that it’s cohesive with the gameplay aspects, and that means that the betting is streamlined as well. Play with all 20 paylines activated to keep your RTP maximized.

You have the ability to pick coin sizes in this game that range from $0.01 to $0.25 apiece, so the minimum bet size per spin is a low $0.20. However, because you also have the option to bet up to ten coins on each payline, you can bet as much as $50 on the upper end. The betting range is wide enough to cover basically all players at all stakes, which makes it very inclusive.

There’s one bonus feature in the Cream of the Crop video slot. You will see treasure chest show up on the reels at times, and this symbol acts as a scattered bonus symbol. Whenever you’re able to pick up at least three on the reels, then you’ll be given an instant win bonus feature. This is like winning a random payout, and there’s not really much to the feature itself, but it’s cool to have another way to get paid. You’ll find that you get bigger payouts on average whenever you get more chests.

While the treasure chest is the bonus symbol, we think that the most important symbol in the game is actually the rabbit. This is because the rabbit is an expanding wild symbol, and so much of this game’s value comes from the regular pay table.

The rabbit wild symbol appears on the first, third and fifth reels. This means it doesn’t have its own winning combinations. With that having been said, it expands to cover the whole reel every single time it shows up. This leads to chances for multi-line payouts on the same spin, which is why we think it’s the most important symbol in the Cream of the Crop online slot.

Another important symbol is the corn. This symbol appears on all five reels, and it’s the highest-paying symbol in the game. Five of a kind of this corn symbol pays out a strong 2,500x top jackpot. You can also score 250x for four of a kind, and three of the corn symbol on an activated payline will get you 25x.

This symbol also gives you a win of 5x for two of a kind. You should note that this is the only symbol in the game that pays for just two of a kind on a payline, and as usual, all wins are from left to right only.

There are a few other symbols that give you some pretty solid payouts in this game. First up is the pumpkin. It’s worth 750x for five and 240x for four of a kind, which is only slightly below the win for four of the corn symbol. It also pays 60x for three of a kind, which is more than twice the win for three of the corn. You can actually think of this as a secondary jackpot symbol because it has some pretty strong payouts.

One symbol has a couple of different peppers on it with a red one and an orange one. This symbol pays out 500x for five of a kind. The cabbage symbol pays pretty well also, and five of it will earn you a win of 375x. The carrot still in the ground pays 300x for five of a kind, and the win drops to 200x for five of the radish symbol. These wins are all pretty balanced, and it goes to show that this game is seriously about giving players solid payouts and a high hit-rate.

The Cream of the Crop video slot has four other crop symbols that pay to round out the bottom end of the pay table. You’ll get 100x for five of the onion symbol along with 75x for five of the turnip. The sunflower symbol gets a 60x win, and so does the symbol of the weeds growing. We think that it would be better for both of the lowest symbols to be weeds or somehow related since they have the same payout, but regardless, they give decent wins as a part of a strong pay table overall.

A Note on Gameplay Style

We feel that it’s very important for players to know what they’re getting themselves into with this game because the play style is a bit different than a lot of other video slots. The Cream of the Crop online slot is based around an experience that gets most of its value from the regular pay table. That means that you aren’t going to hit the bonus feature often, and when you do, it’s only going to last long enough to give you a quick payout before you’re back to the regular game.

Some people do not like this style of play, so they won’t like this particular slot due to stylistic differences. If that’s the case for you, then that’s completely fine. Rival Gaming has a ton of great games in different styles, so you’re sure to find several that you prefer. However, you should be aware of the type of gameplay this particular slot is bringing because it tends to appeal to a specific type of player. If this style is not something for you, you might want to try out some of the other Rival Gaming slots instead.

The Cream of the Crop online slot is a good example of Rival Gaming being particularly inclusive with their game selection. While they are typically very inclusive with respect to the bet sizes available in their games, they also have slots that cover a lot of different play styles.

This particular title has kept its popularity due largely to the fact that it caters to a particular type of player. If you like a reasonable volatility with a high hit-rate, then this is a game that you will like a lot. However, if you prefer more features and a higher volatility, then you will most likely want to find something else because this game will not meet your needs.