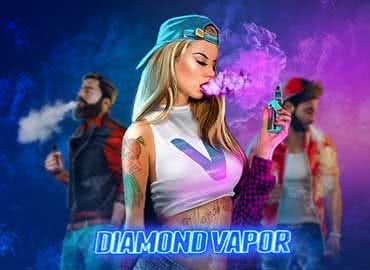 Diamond Vapor was the world’s very first vaping-based online slot, and it uses 10 paylines with a particular visual aesthetic that stand out immensely.

Vaping is a replacement for traditional tobacco cigarettes, and the main advantage of using it is that it doesn’t use actual tobaccao. Instead, it delievers nicotine using various flavored “juices” in an electronic device. Endorphina picked up on this phenomenon and made the world’s very first online slot using it as a theme, and the result is Diamond Vapor. The name of this slot comes from a partnership with an actual vaping supplier based out of Florida in the United States, and all of the symbols and motifs in the game tie back to this in some way.

The format of the Diamond Vapor video slot is a balanced, old-school approach with just 10 paylines spread across five reels and three rows of action. The reason for having so few paylines is two-fold. First, it leads to very straightforward bet size multiplies, which is good for players who care a lot about that sort of thing. Second, it allows for an extremely valueable extra add-on during the free spin bonus feature.

As we mentioned above, betting is made extremely simple. With all paylines activated, your minimum wager is just $0.10, which is about as low as you can reasonably get in the industry as a whole, so it clearly covers low-stakes players. Since you can bet up to 10 coins on 10 paylines, and the maximum coin size is an even $1, the highest bet size is $100, which is plenty large enough for even high rollers. 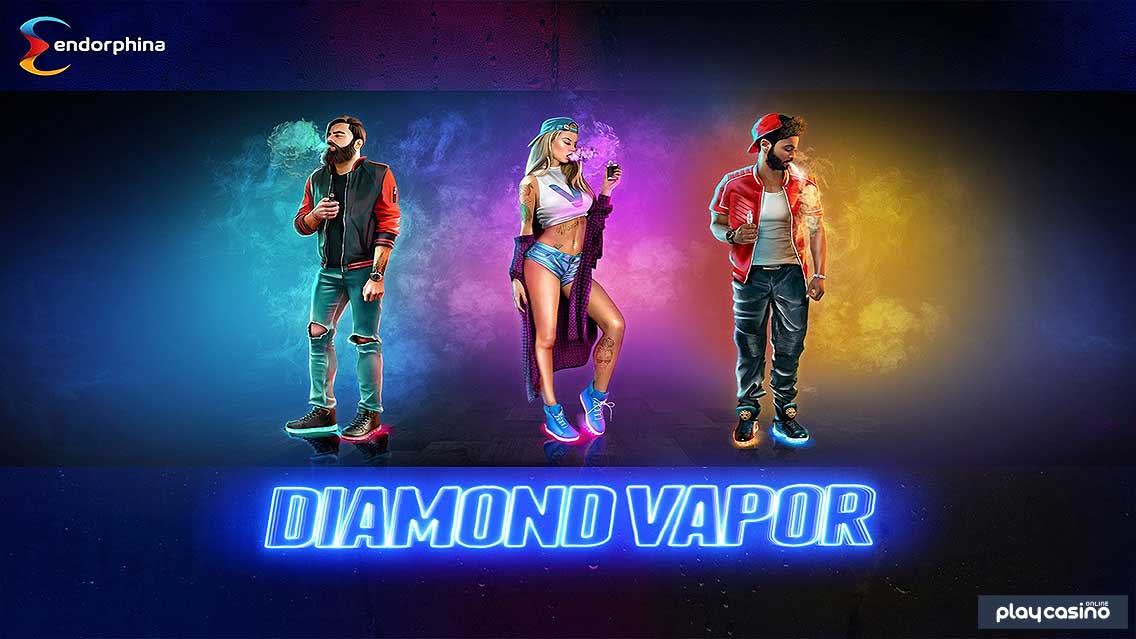 Something very important to note about this game is that the play style is a bit different than what a lot of players will be used to. First off, the wild and the scatter are the same symbol, which means you can get a lot of value from the same symbol on the same spin. Second, half of the regular-paying symbols in the game pay with only two of a kind. This keeps the hit-rate much higher than what most players will be familiar with, and it keeps the volatility down by smoothing out the swings. 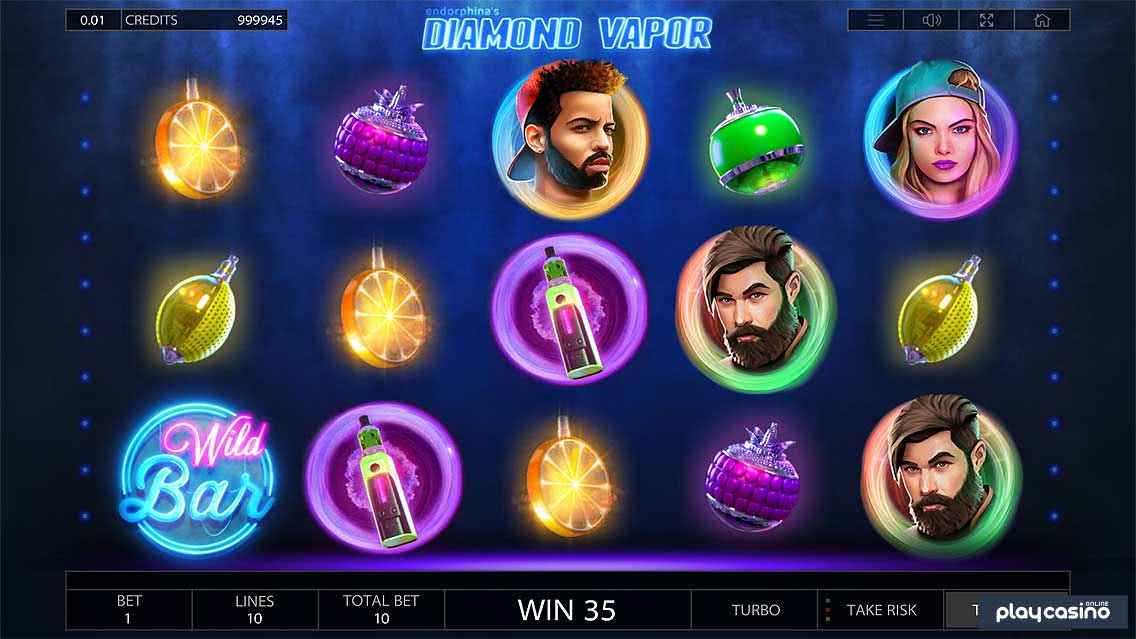 In most video slots, the two most important types of symbols for regular gameplay are the scatters and wilds. In the Diamond Vapor video slot, they are one in the same. The Vape Bar symbol is a wild scatter that shows up on every single reel in the game. It also substitutes for every other symbol in the entire game, and it’s clearly the most important symbol that you want to see on the reels whenever you take a spin.

This means there isn’t really much necessity for the three of a kind win for the wilds when they show up left-to-right, but it’s on the pay table to avoid confusion since they also pay when they aren’t on the same payline ala traditional scatters. 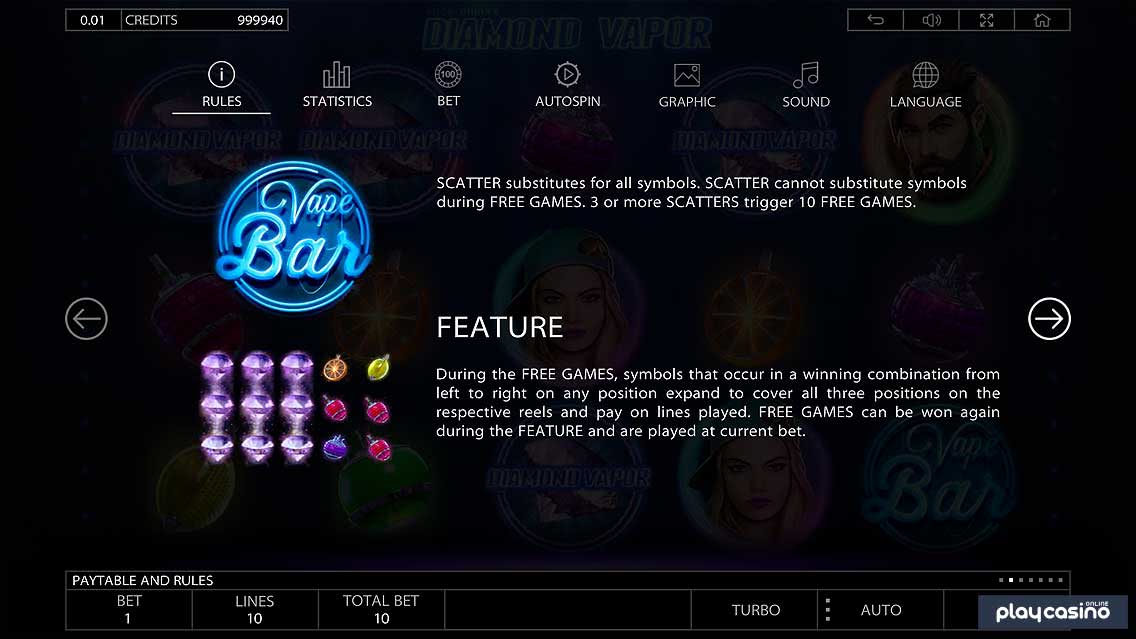 The free spins bonus feature is triggered by getting three or more of the scattered Vape Bar symbols. You’ll be given a set of 10 free spins. Though there is not a multiplier during this feature, which is the traditional “extra” for free spins to make them more valuable, you will get an expanding symbols feature. The way this works is that any symbol that hits a left-to-right winning combination will expand to cover the entire reel. This will lead to 10 times the winnings, since you’ll get paid on each of the 10 paylines.

A cool side effect of this is that it makes the top win available on a single spin 20,000x. If you get five of the wild symbol on the same payline, that’s how your win will pan out after the expansion, which is a pretty tremendous opportunity. 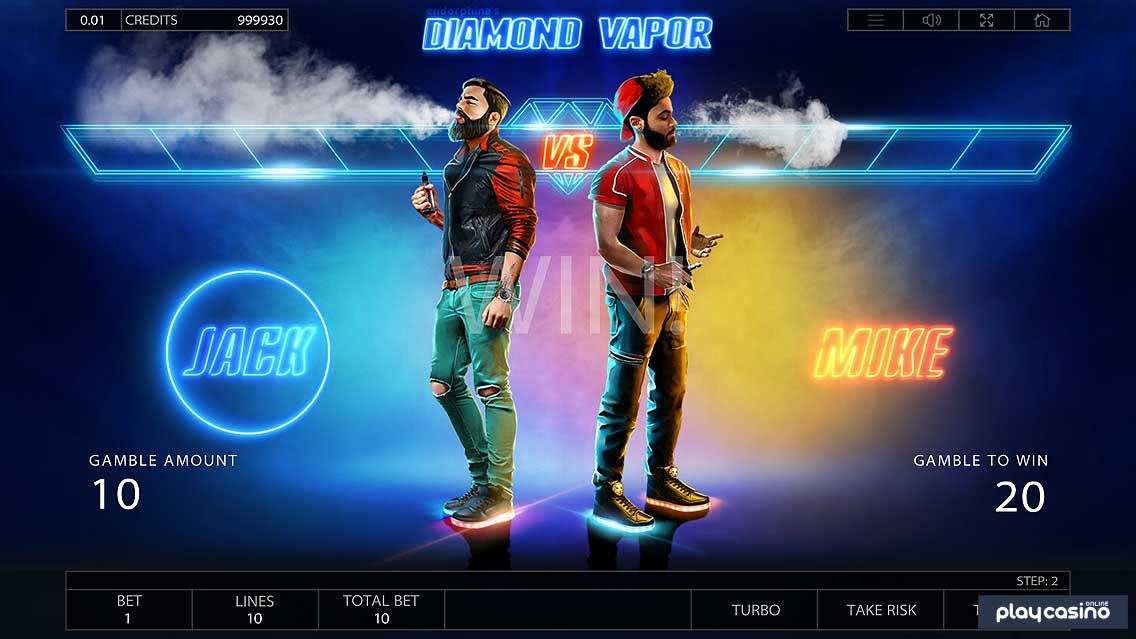 The Diamond Vapor slot has a Diamond Vapor symbol, which seems intuitive enough, that’s based on the brand name of the vaping supplies. It’s the highest-paying symbol other than the wild, and it gives you 1,000x for five of a kind. You can also score 200x for four of a kind, 50x for three and 10x for just two.

The electronic cigarette is next, and its wins are worth half of the Diamond Vapor symbol. You can tell this symbol by the purple, circular background that outlines the symbol, but the e-cigarette itself is green with black trim. You’ll get 500x for five, 100x for four and 25x and 5x for three of a kind and two of a kind, respectively.

You’ll find three different characters on the reels. There’s one man without a hat, a man with a hat and a woman with a hat. All three of them have the exact same payouts, which makes keeping up with your wins for these three symbols pretty easy. You’ll get 250x whenever you pick up five of one of them, 50x for four, 20x for three and a simple 5x win for just getting two of a kind. 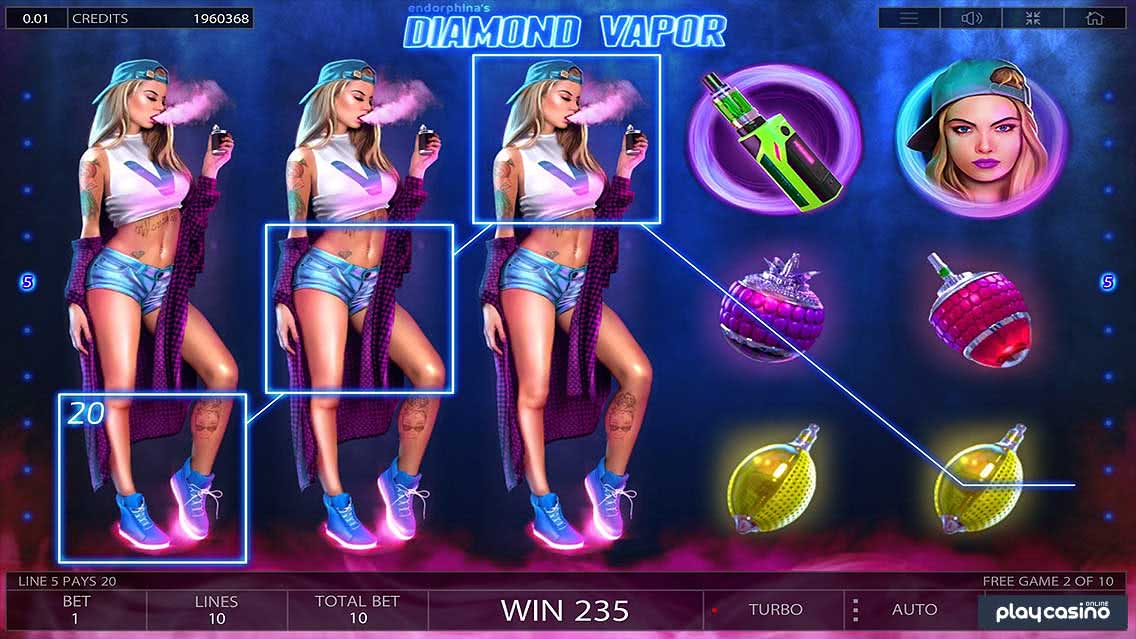 There are five fruit flavor symbols that are used for the low-end symbols in this game. They are set up to be sort of a mix between traditional slot fruit machine motifs and the flavors available from the Diamond Vapor company itself. The grape and blackberry symbols pay both 125x for five of a kind. You can pick up 100x for five of the orange, lemon or green apple as well. These five symbols pay for three of a kind or more. 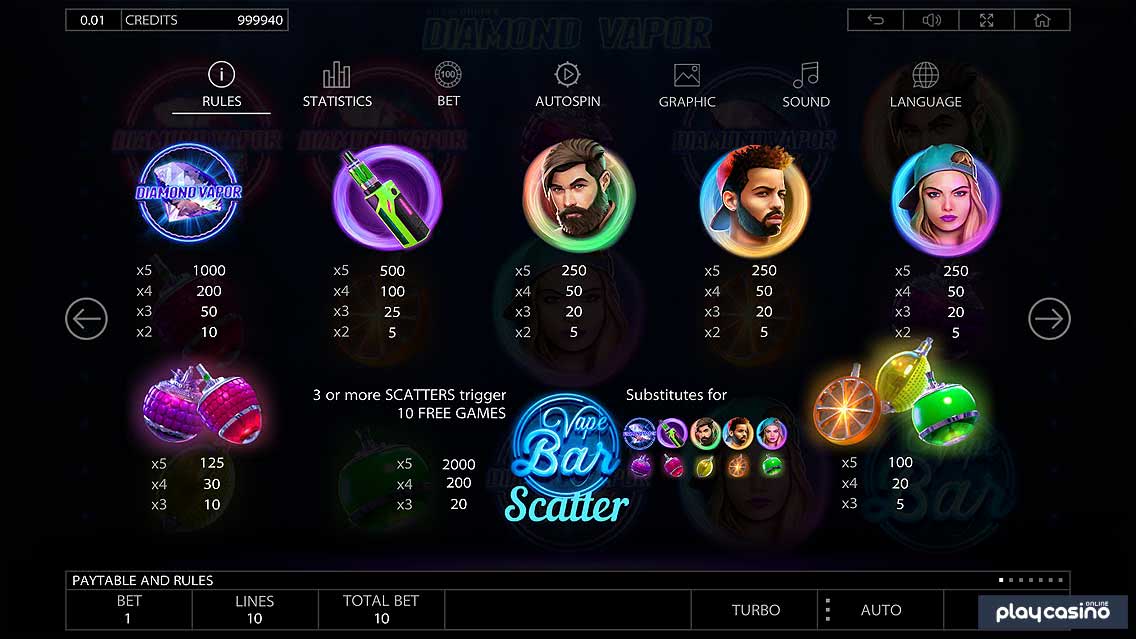 Endorphina’s Diamond Vapor video slot is a great example of putting together a top-tier game with a theme that is topical but that hasn’t really been used. They’re good at developing different styles of gameplay, which they have definitely done with this game, even though it uses a very traditional and “old school” approach to the game structure and paylines. Generally speaking, this is a title with gameplay that will appeal to a lot of players, even if the theme isn’t necessarily all that appealing to everyone.