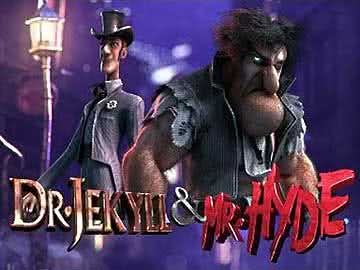 The Dr. Jekyll and Mr. Hyde online slot by BetSoft is based on the classic story by the same name. It gives you multiple bonus features based on the duality of the main character, and this all happens in a tremendous visual display of top-tier graphics.

The Dr. Jekyll and Mr. Hyde video slot is a game produced by BetSoft based on the classic novel about a doctor that tries to overcome his dark side, who comes out at night and causes all kinds of problems. This game has great graphics as a part of the Slots3 line, which is widely regarded by industry experts as having the strongest visual appeal of any series of games in the online casino world. You’ll have a lot of opportunities to get paid since this game has a feature-heavy style of play with lots of different bonus options based on the characters and motifs found in the source material.

Format and Layout of the Dr. Jekyll and Mr. Hyde Slot

You’ll have 30 paylines at a maximum in this game with five reels and three rows. That’s a good number of ways to win on each spin without it being so many that you can’t keep up with all of them. You will have the choice to play with fewer paylines, but it’s not really a good idea since you’ll have to deal with a lowered RTP rate along with that. We really suggest that players just keep the number of paylines maxed out and enjoy the gameplay as it is for the best experience and chances to win. 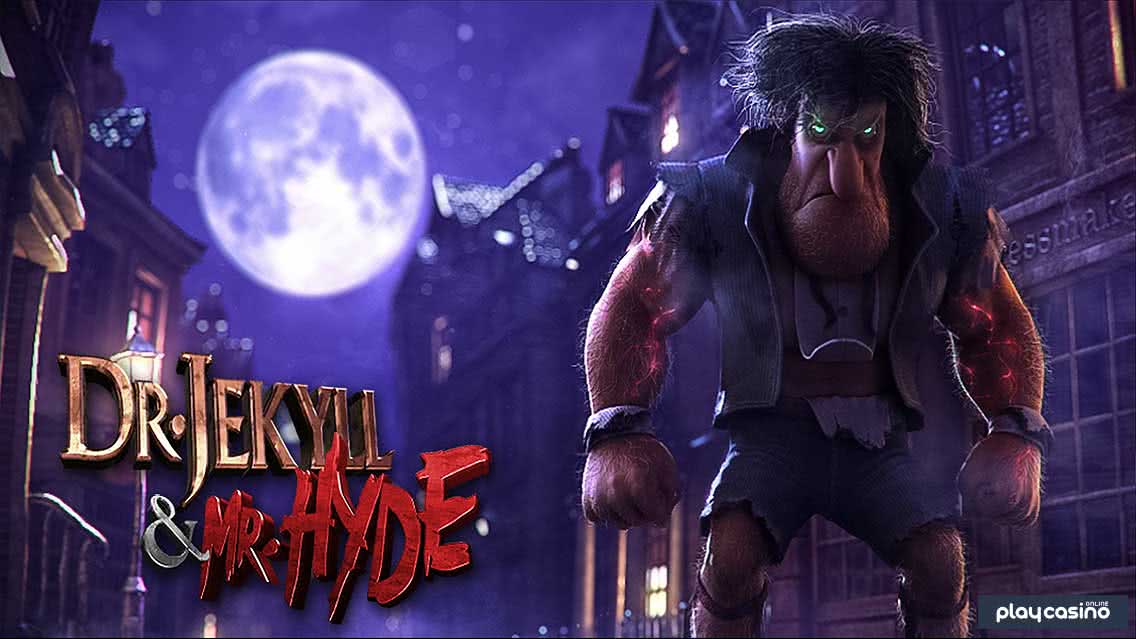 For adjusting the betting, you can drop the coin size down to $0.01 apiece for a minimum bet size of $0.30 per turn. This runs up to $150 at the maximum end by setting the coin size to $1 each and betting (up to) five coins on each payline. This obviously leads to a wide enough betting range with a lot of different available amounts in between so that you can really zero in on the bet size that works the best for your own bankroll management strategy. 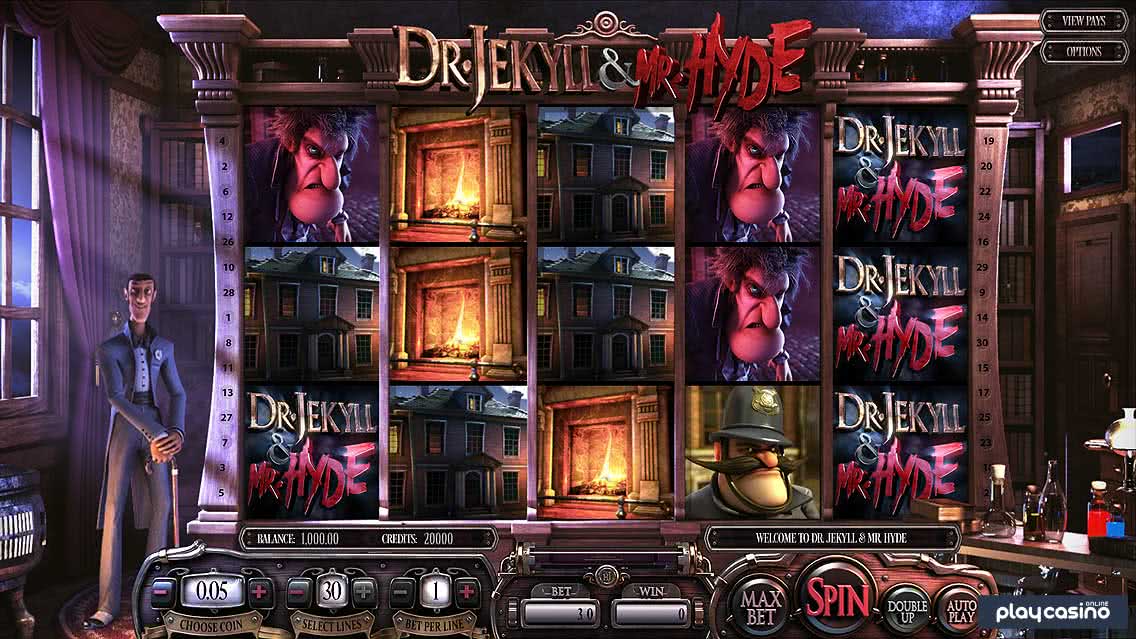 On the first, third and fifth reels, you’ll see a logo symbol for the Dr. Jekyll and Mr. Hyde video slot. This logo symbol is a wild, and because it doesn’t show up on each of the five reels, and because it doesn’t act like a scatter for payouts, it doesn’t give you any prizes on its own. However, it will help you to get extra winning combinations that you would have missed without it. It also puts you in a position to get more bonus features by counting as the two key characters in the game (Jekyll and Hyde). This is a nice addition to how it acts as a usual wild symbol, and it’s the type of thing that you don’t always see in terms of making it easier for players to trigger features with wild symbols. 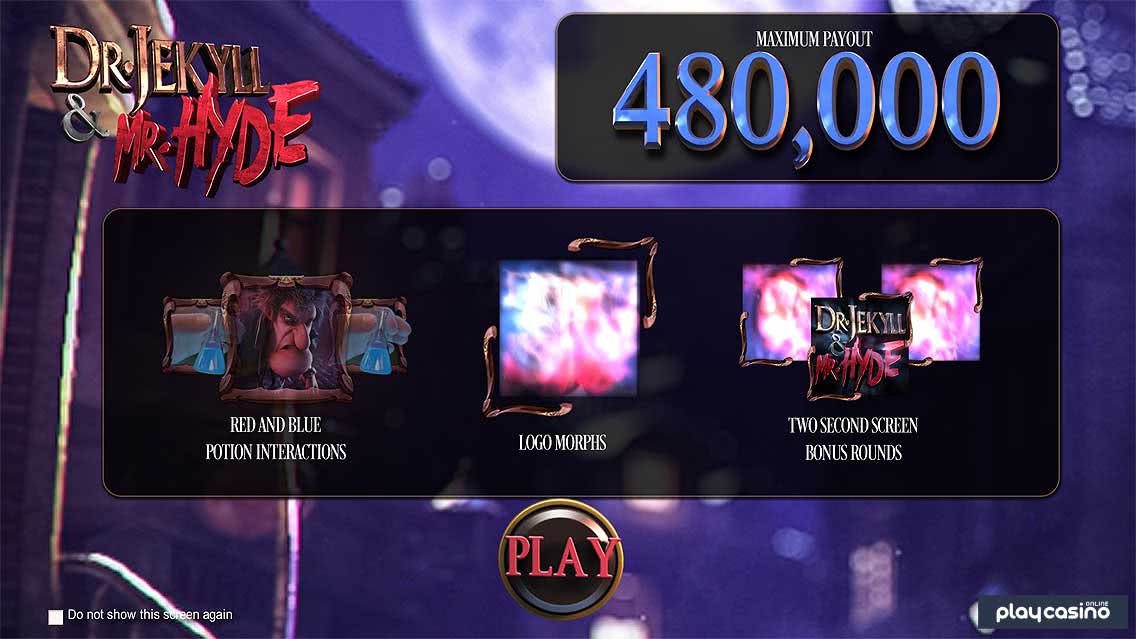 There are two key features that have to do with the transformation between the two main characters. If you get a red potion on the second or fourth reel beside of a Dr. Jekyll symbol, then you’ll get wild hydes on the reels. They will replace every logo, Jekyll and Hyde symbol in the process. These Mr. Hyde wild symbols pay 1,200x for five of a kind, 200x for four and 45x for three on an activated payline.

Along similar lines, a feature is triggered if you get a blue potion on the second or fourth reel beside of a Mr. Hyde symbol. Thsi will give you an instant win that pays out a random amount between 5x and 20x your total wager. This is like a line bet win between 150x and 600x, which are obviously some pretty significant pays.

It’s important to realize that the logo symbol can count as either of the character symbols for the purposes of triggering this feature, and it’s chosen at random which of the two it counts as if both are available. 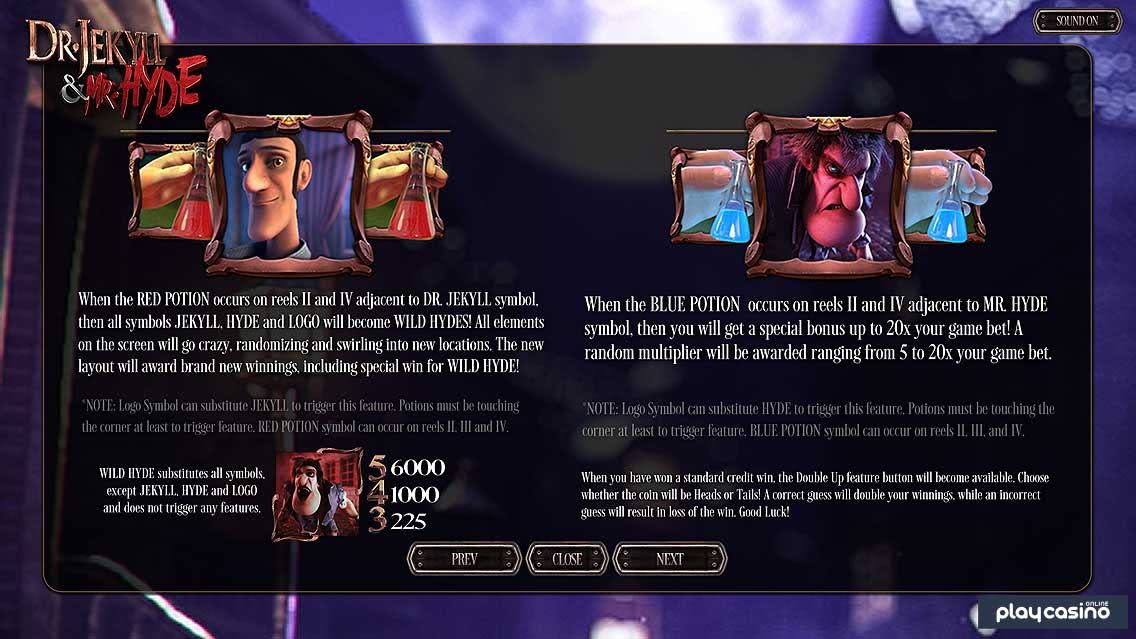 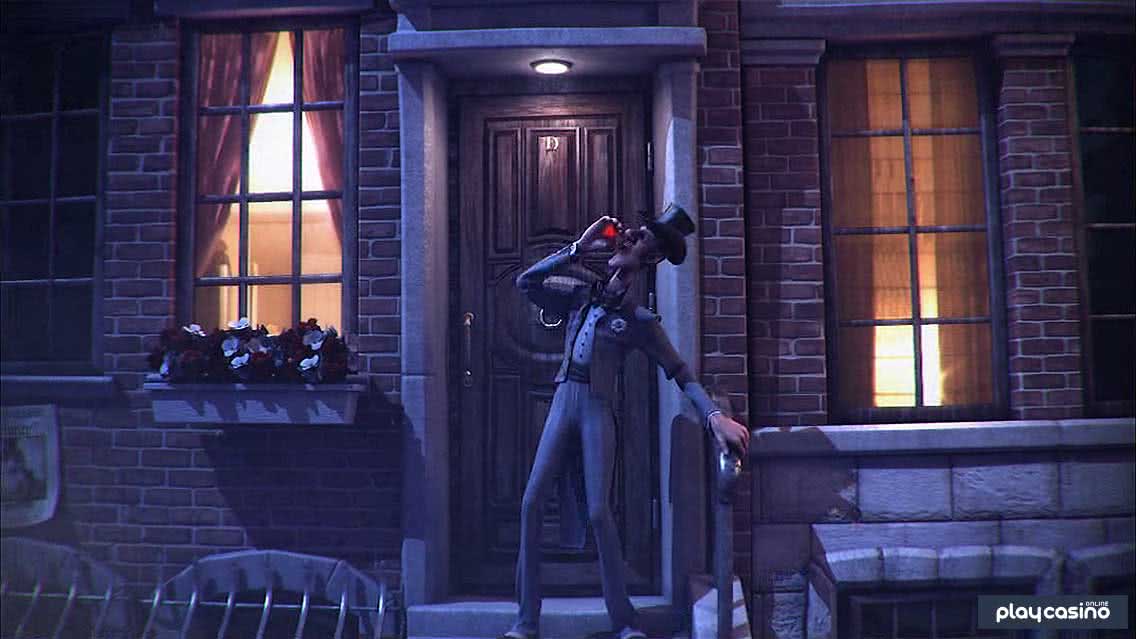 Collcting the red potions will fill the potion meter in the Dr. Jekyll and Mr. Hyde online slot. When it becomes filled completely, you’ll get a free spins mode. This mode continues until you pick up 12 blue potions on the reels total, so it can really last for quite a while. Because of how this feature is triggered, the red potion meter is tied to each individual bet size, so switching sizes won’t keep the red potion amount in the same spot. 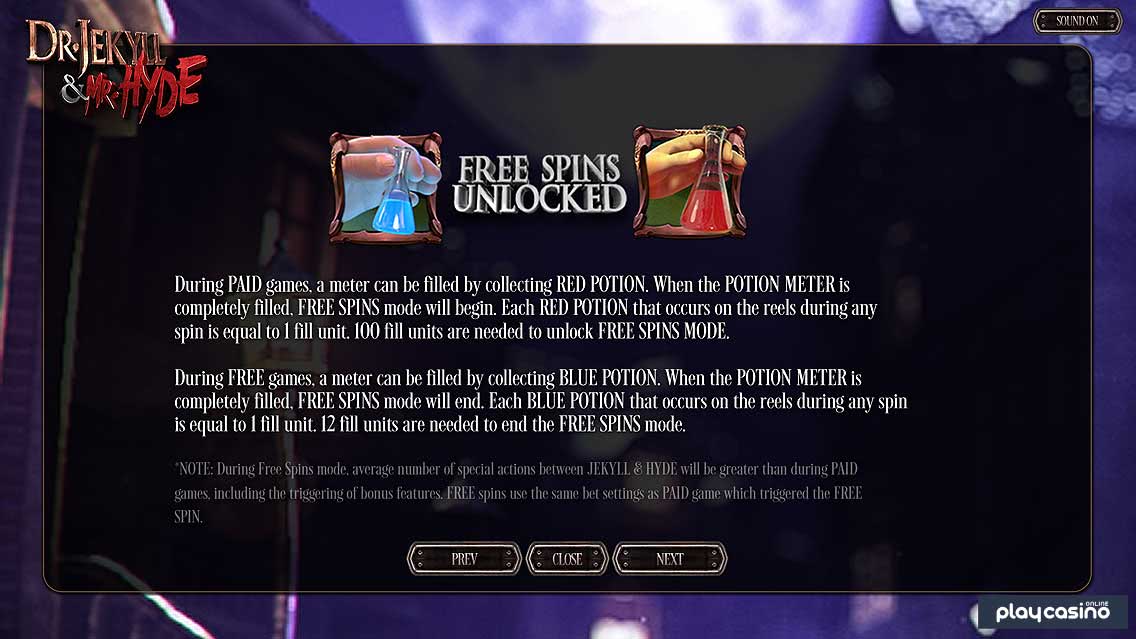 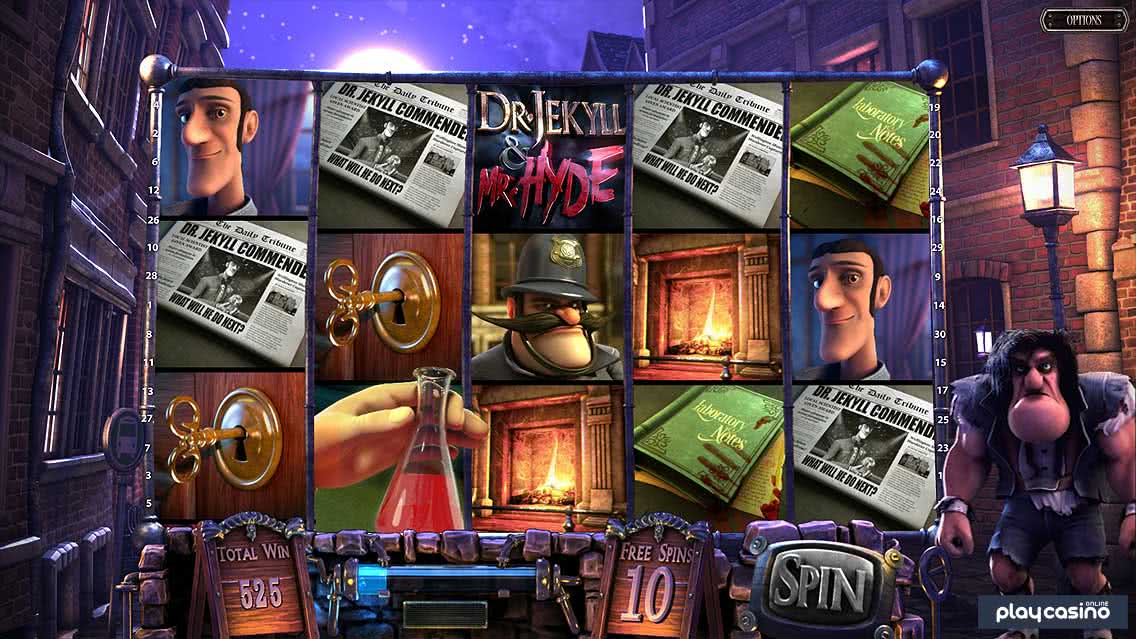 If you get the combination of Hyde, the logo symbol and Hyde on the second, third and fourth reels, respectively, then you’ll trigger the Frenzy Bonus feature. This has you walking through the streets of London as Mr. Hyde. You’ll come to various forks in the road, and you can choose to go to the left or right. The more you avoid the officers, the bigger the payouts, and you can win several dozen times your total bet size with this feature. 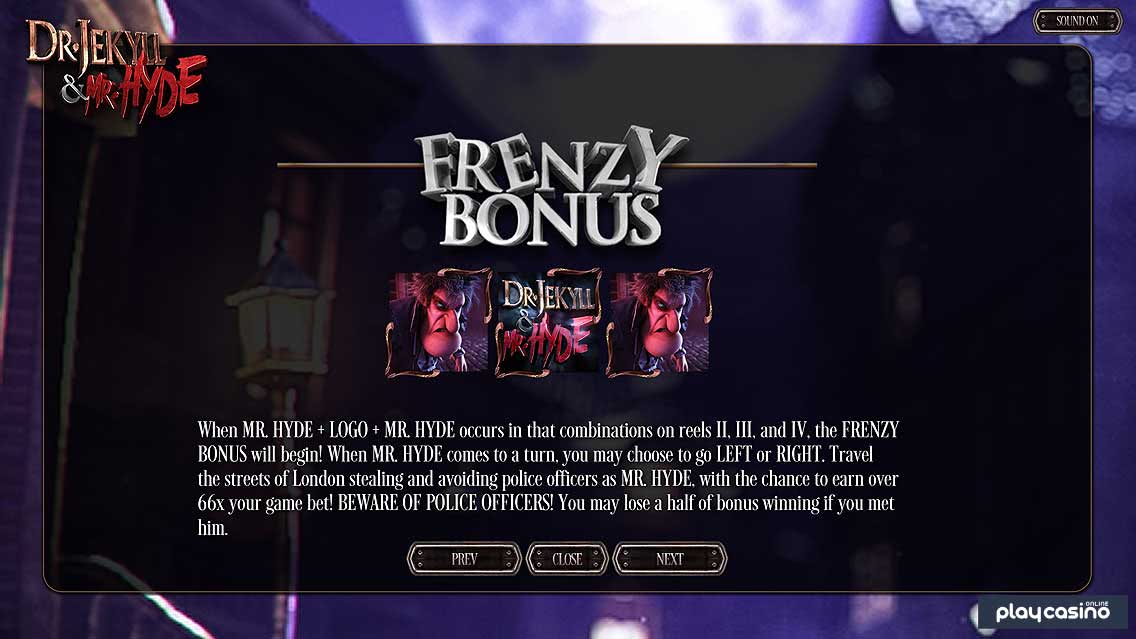 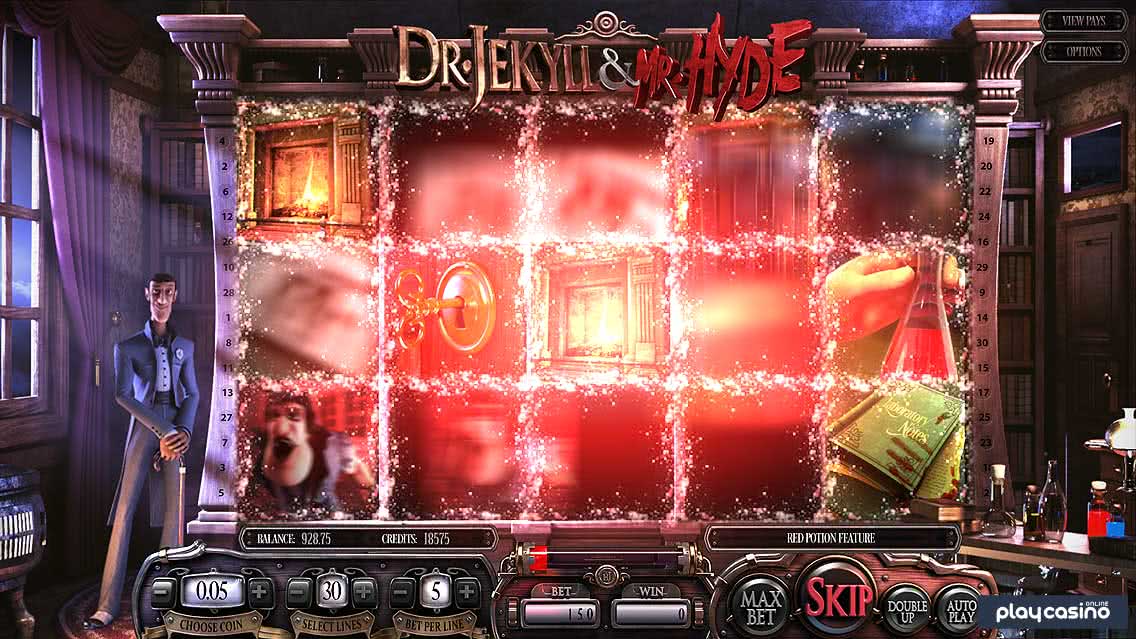 The combination of Jekyll, the logo and another Jekyll on the middle three reels kicks off the Potions Bonus round. What you’re trying to do here is help Dr. Jekyll create a serum that will keep the monster Hyde from coming out. The faster you get the right ingredients, the larger the payout you get. You can win up to a maximum of 160 times your total bet with this feature, which is obviously a massive payout. 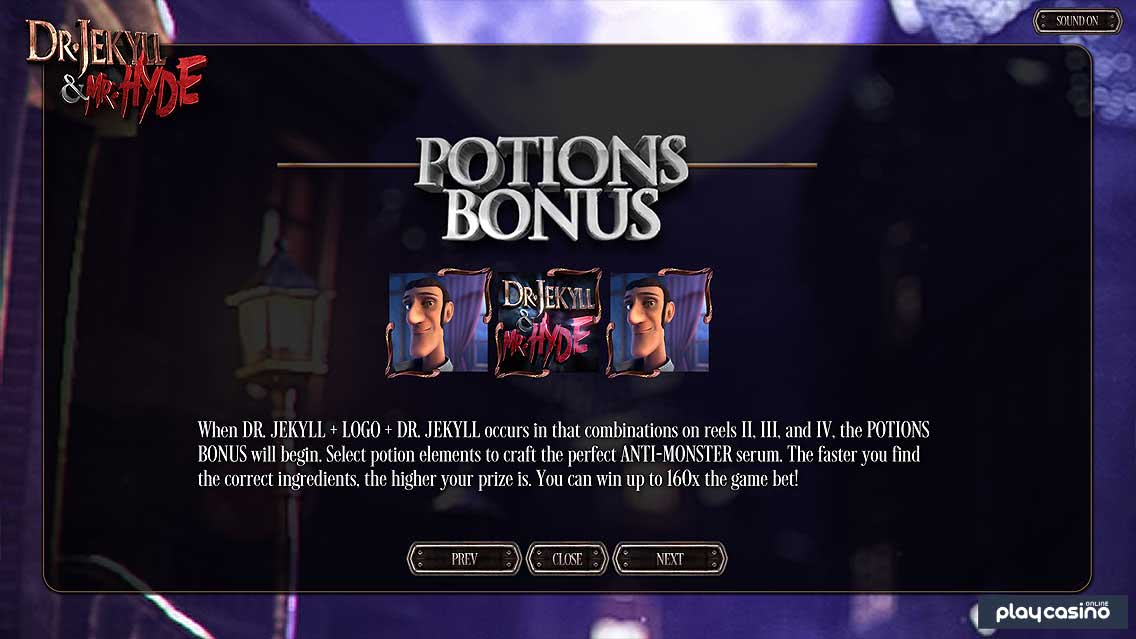 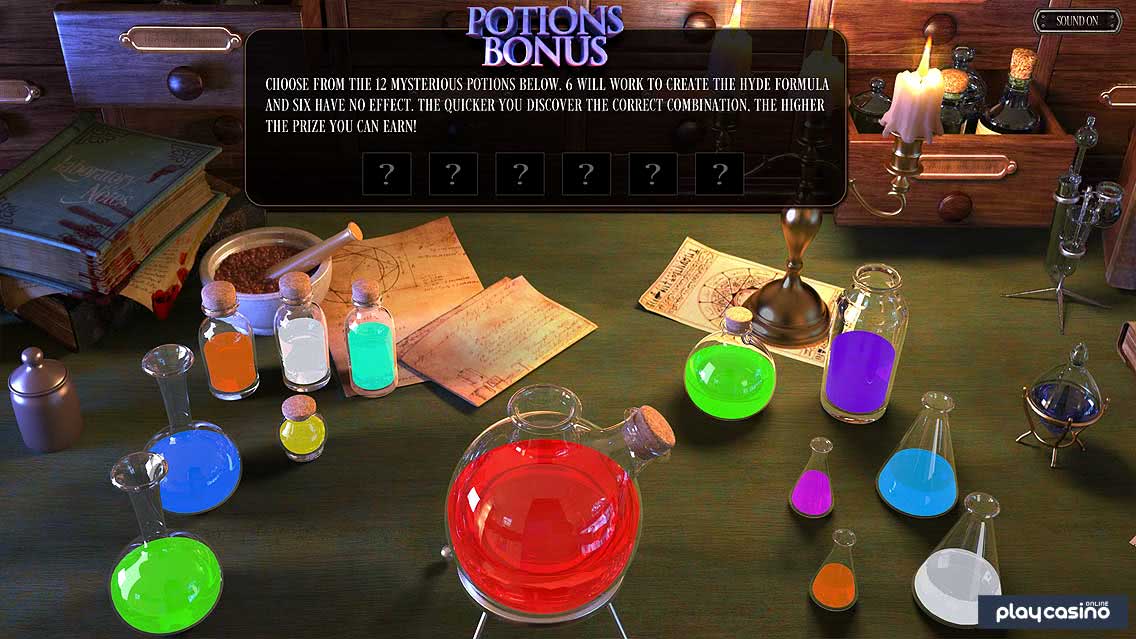 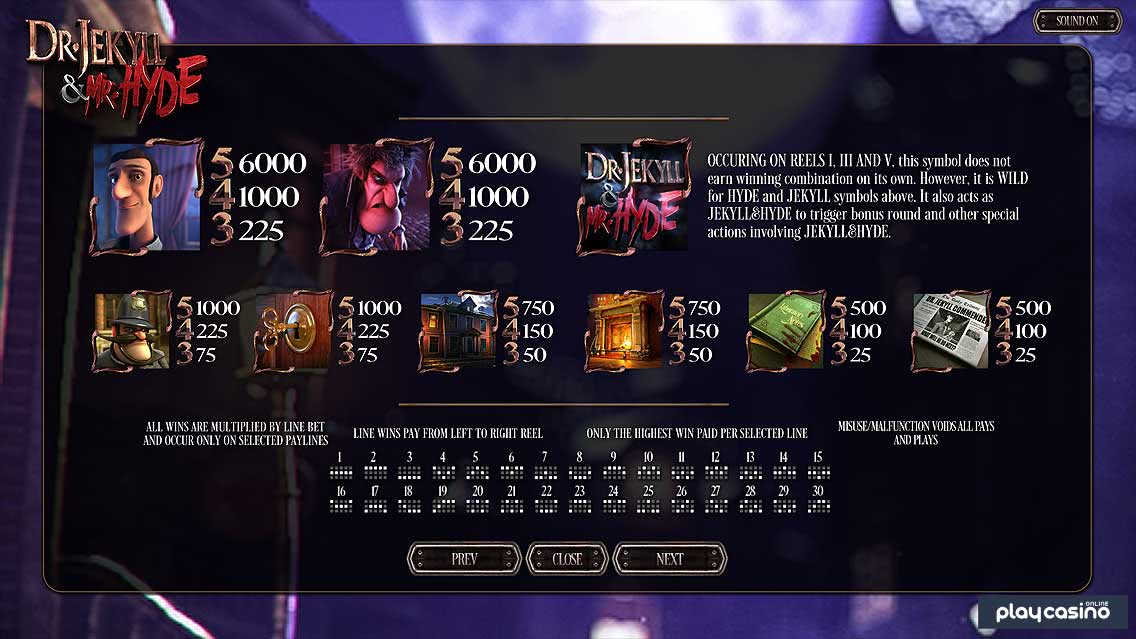 With the Dr. Jekyll and Mr. Hyde video slot, you’re going to be playing out a story that has been admired for decades for its depth and multiple layers of meaning. BetSoft has centered this game around several different bonus features, and with a medium overall volatility that comes from the combination of the features and a balanced pay table, you get a lot of opportunities to run up some serious payouts over a session. As a whole, this is a popular game because it has a lot that different types of players can enjoy from a stylistic perspective.