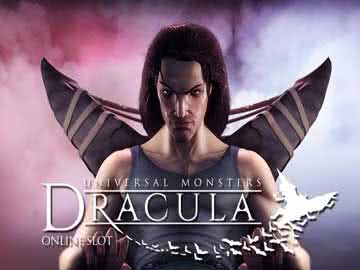 The Dracula slot by Net Entertainment is a 40-payline game with random bat features, excellent graphics and plenty of ways to win.

The legend of Dracula has been captured in many different forms of media over several decades. It started out as a novel, and it has been adapted into film, video games, comic books and all kinds of other avenues. The core concepts of the story remain the same throughout all of them, and they have been captured at their root by Net Entertainment’s Dracula video slot.

Format and Layout of the Dracula Slot

When you first look at the game, you’ll see Dracula himself brooding to the left of a 5×4 grid of symbols. There are 40 paylines in this game, and as is often the case with games with this number of ways to win, it uses five reels and four rows for its base layout. These paylines are fixed and cannot be changed, which is important to how the betting and features work.

We feel the need to stop here for a moment to point out just how tremendous the visual appeal is for this game. As a part of the Universal Monsters series of slots by Net Entertainment, the Dracula slot machine uses several characters with strong, aesthetically pleasing 3D graphics. The sound and overall graphical style capture the essence of Dracula and his story in a tremendous way.

Both Dracula and Mina (the lady with red hair in the white and blue dress) are top-paying symbols. You can get 200x for five of a kind of either of them along with 80x for four or 20x for three. These symbols are important also because they often show up stacked. The main story of Dracula centers around his pursuit of Mina as he believes she is the reincarnation of his lost love, and this slot brings that to life in a major way.

Dracula shows up stacked on the second reel, and Mina does the same on the fourth. Each stacked symbol covers three spaces. If both of the stacked symbols appear in full at the same time, then you are given a bonus feature that consists of 10 free spins. During these free turns, you get a special stacked wild symbol that is the two of them together that will show up on the middle reel, and it gives you chances to make a lot of multi-line wins that can run up your balance in a hurry.

During regular gameplay and the free spins, you can get wild symbols on the middle three reels. The red W symbol can show up on the second, third and fourth reels to give players opportunities to make winning combinations in the Dracula slot that they wouldn’t have otherwise received. This is on top of the stacked wild that only appears on the middle reel and that only shows up during the free spins bonus round.

Being completely objective, the Vampire Bats feature from the Dracula video slot is one of the coolest slots features we’ve ever seen from a visual standpoint. This feature is activated completely at random during the base game, and the way it works is that Dracula on the left of the reels will explode into a bunch of bats. These bats will fly and land on the reels on a cluster of several symbols. Then, all of the bats that landed on the reels will turn into the same symbol, which is selected at random and can be the wild symbol.

This feature obviously gives you a lot of value for that spin, but there’s more to it. During the free spins, your spins will all have the Vampire Bats Feature triggered, which adds even more value to the bonus round.

You’ll find three mid-range symbols in this game. There’s the woman wearing the hate, the man holding the bottle and the man holding up some money. These are all minor characters from the story, and they all have the same payouts. You’ll get 60x for five of a kind. The win for four of a kind of any of these three symbols is 40x. It drops down to 10x for three of a kind, but that’s still a pretty reasonable win.

Players will find four different family crest-type symbols that have card ranks on them that round out the bottom end of the pay table. They all pay 40x for five of a kind and 5x for three of a kind. However, they have various wins for four of a kind that range from 20x to 10x. These symbols are stylized in a way that fits the graphical theme of the game perfectly, and it’s clear that the Dracula video slot was made with a tremendous degree of effort put into detailed graphics when you look at these four A, K, Q and J symbols.

Net Entertainment’s Dracula slot is a showcase of what they are able to do with a combination of extremely strong graphics, tremendous features and excellent gameplay. The game has no significant weaknesses, though it will not appeal as much to players who prefer high-volatility gameplay simply because the structure of the pay table doesn’t include particularly high individual jackpots.