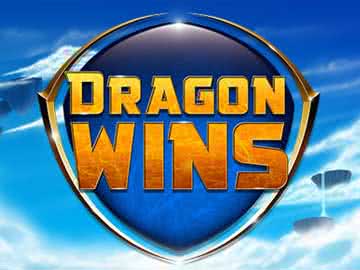 The Dragon Wins slot by NYX Gaming has 40 paylines across an atypical layout with lots of dragon-themed bonus features.

Human beings have historically been at a sort of war with reptiles in the sense that they have always been one of the only true predators we have, which is interesting because they’re generally smaller than us in most cases. This is one of the reasons it’s thought that most cultures have some sort of dragon-inspired mythology, and that helps to make the Dragon Wins slot by NYX Gaming resonate with players. It has a fun format with a tremendous number of features and a medium overall volatility.

Format of the Dragon Wins Slot

Instead of being set up like a rectangle, this game is set up like a hexagon. There are five reels, but you’ll find three rows on the first and fifth reels with four rows on the second and fourth reels and five rows on the center reel. Along with this atypical layout comes 40 static paylines that cannot be changed. This means you have plenty of ways to get paid on every spin, but you also have a lot of screen real estate for feature activations and other goodies.

Betting is set up around 25 coins per turn, which is a little different considering there are 40 paylines. You’ll always be paying 25 coins since there’s not an option to adjust that, but the actual coins can be worth between $0.01 and $5. This puts the minimum bet size at $0.25 with the maximum at $125. 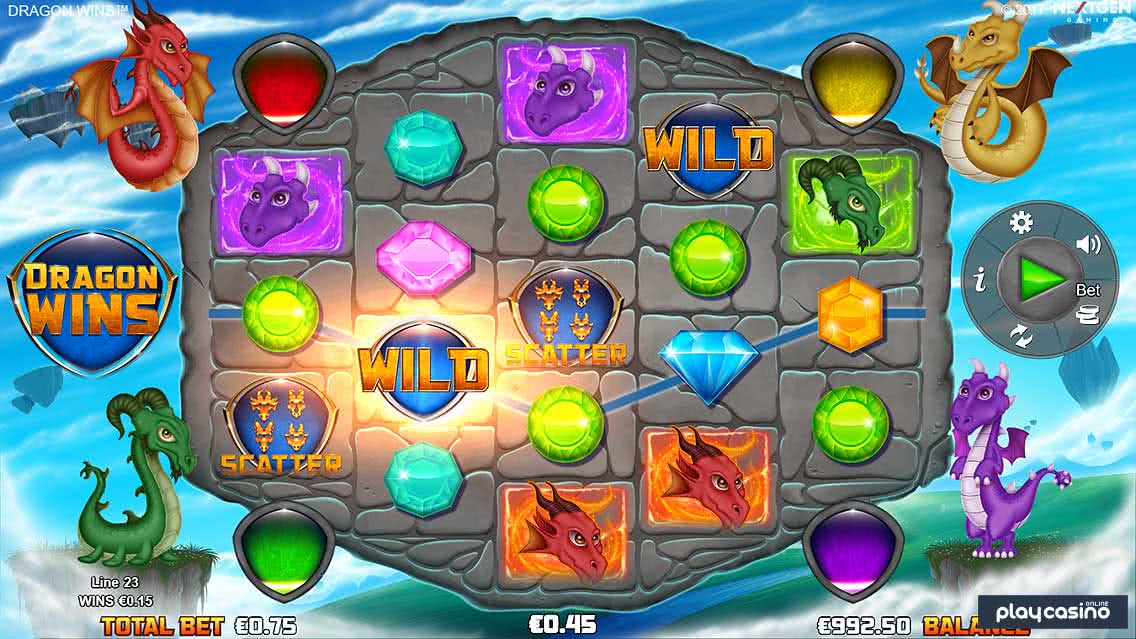 The key game mechanic for the Dragon Wins video slot is the set of four dragon meters. The red, yellow, green and purple dragon meters show up in the top-left, top-right, bottom-left and bottom-right corners, respectively. Whenever you get dragons of each color on the reels, they help to fill those meters. When one of those meters is filled completely, then you get the associated bonus feature, as described below.

When you fill the red dragon meter, you’re given a set of three dragon spins where the red dragon appears stacked on all five reels. This has the effect of making it a lot easier to hit red dragon wins.

Once the yellow dragon meter is full, you get three dragon spins where all dragons are changed to this color. That by itself would be very valuable by making it easier to make wins with this dragon, but it’s made even bigger by the fact that the low-level symbols have a chance to turn into yellow dragons as well. 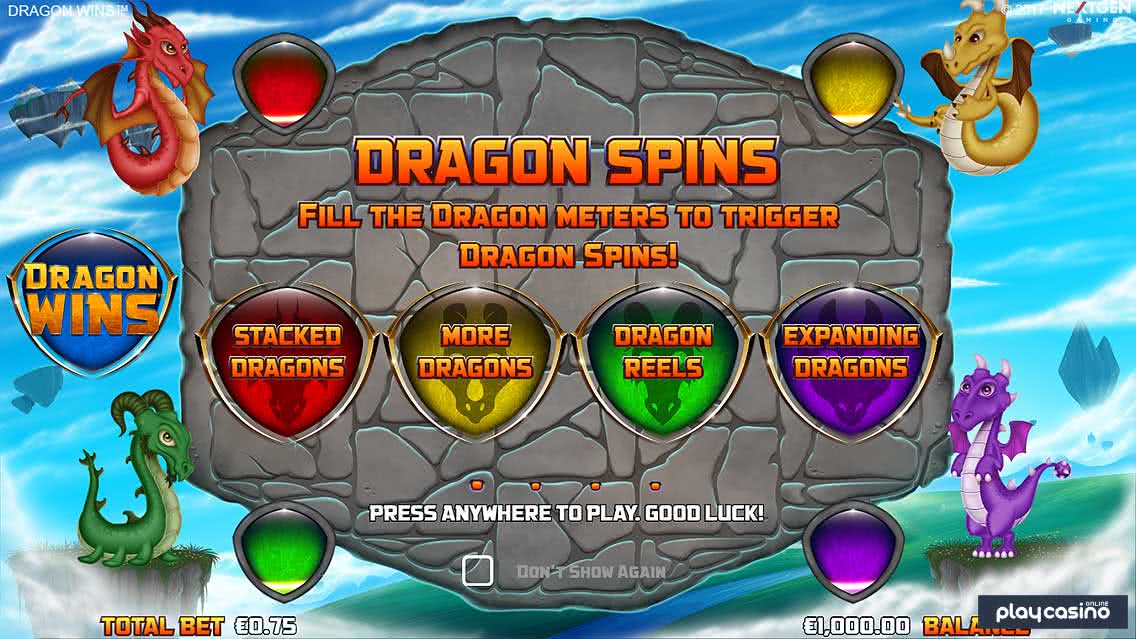 Three dragon spins are your with the green dragon meter being filled up where all dragons switch to the green. On top of that, the middle three reels have chances to turn into dragon-only reels.

Finally, we have the purple dragon meter. When this one is full, all dragons change to the purple dragon, and they have a chance to expand. When they expand, they cover the entire reel they’ve landed on. It’s not hard to see how each of these four features give players a lot of value, and you’ll get three dragon spins with the purple meter as well.

On top of that, the dragon’s fire feature can trigger at random to give you up to 10 dragon spins instead of just three. 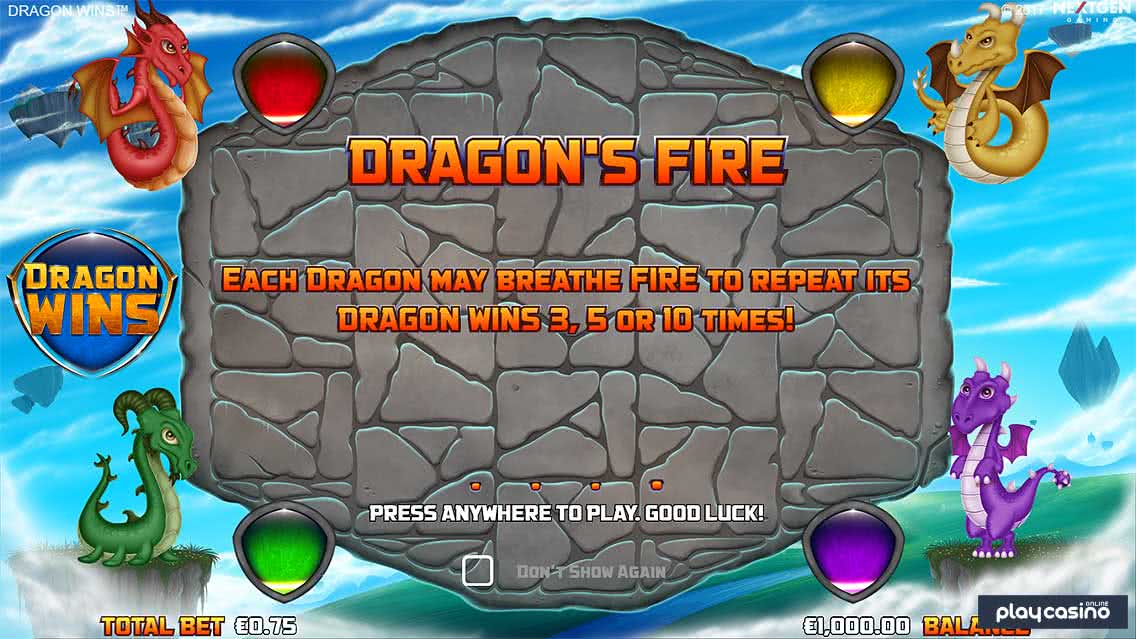 The wild symbol is pretty straightforward in this game. It’s just a blue symbol with the word “wild” on it in fiery, orange letters. Five of a kind of the wild is worth 500x, and it drops down to 100x for four. Three wilds gets you 25x, and just two is worth 2x as the only symbol in the slot that pays for just two of a kind. However, this is slightly misleading as you would always get a two of a kind win worth at least 2x at a minimum for lining up two wilds, so that extra addition to the pay table isn’t really necessary.

The scatter in this game is the blue symbol with four dragon heads on it. It pays a whooping 2,000x for five of a kind, the largest normal payout without an activated feature that the Dragon Wins online slot has to offer. Payouts of 200x and 40x are yours for four or three on a payline, respectively.

When you pick up three or more of the scatters anywhere on the grid, you’ll be given a choice between two free spin feature. You can get between five and 10 free spins with random wild reels, or you can pick up 10 to 15 free spins with random wilds added to the game board after your spin is over. Each of these is a good value, but the former has a higher volatility than the latter. 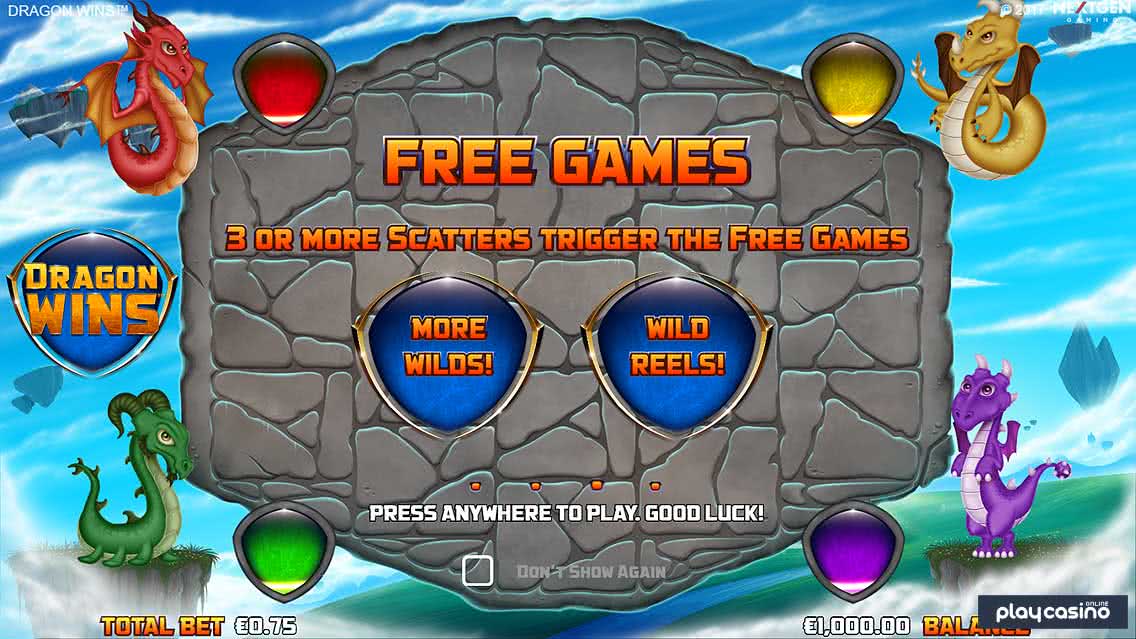 The four dragons that you see in the four corners of the game window also appear on the reels. Other than running up the dragon meters, the four main characters of the Dragon Wins video slot also give some decent payouts. Five of the red dragon is worth 250x, and you can earn 150x for five of a kind of the yellow dragon.

The green dragon has a slightly lower payout available of 100x. This is the same win that you get for five of the purple dragon. These payouts are all in the mid-range level after the wild and scatter pays, but they’re made more valuable than they seem because of how they accumulate to help trigger value-packed features.

Five gem symbols were used as the lower-paying symbols in this game, and we think that fits the theme of the Dragon Spins online slot much better than the typical card rank option. The blue diamond, purple ruby and green emerald all pay out 50x when you line up five on one of the 40 different paylines. You can also earn 25x for five of the topaz or other light-blue gem symbol. These wins are a little on the low side, but the pay schedule makes up for it in general.

NYX Gaming has a lot of titles based on themes that have been used a lot in the online slots industry as a whole. While the Dragon wins online slot may be another example of that, but they also did plenty to make this game stand out from the crowd. Having a different style of gameplay, from the dragon meters to the hexagon layout, means that players get to enjoy something that’s significantly different than what they normally do, and that’s the kind of thing that makes it easy to keep coming back for more.