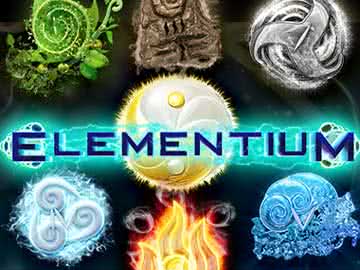 The Elementium Slot by Saucify is based on the classic elements, and it uses a 10 payline format with a lot of wild symbols and a low volatility.

Throughout human history, we’ve tried to figure out how the world around us works by breaking it down into conceptual pieces. At one point, the idea of the elements consisted of things like fire, water, wind and earth. The Elementium slot by Saucify is based on this approach to the elements that make up our world, and the visual style that comes from this is outstanding. Moreover, they have formed up this slot with a gameplay style that’s relaxing with a low volatility and a high hit-rate.

Format and Layout of the Elementium Slot

The format you get with the Elementium video slot is built from the ground up to give players a smooth style of gameplay. It starts with the typical layout of five reels and three rows. From there, you get 10 paylines that pay in both directions (left to right and right to left). The highest combination in each direction pays along these lines. Moreover, the betting has been set up to give you a ton of control over how much you’re wagering per spin with the ability to bet up to five coins per payline. You can also wager with coins that range from $0.01 to the $0.25 level, so the minimum bet size is $0.10 per turn, and the maximum is $12.50.

We want to point out here that you should never play with fewer than 10 paylines. This will lower the RTP percentage of the slot, which is the last thing you want to have happen because that effectively increases the house advantage for no good reason. If you would only feel comfortable with a smaller bet size than what you have, make sure you lower the number of coins and the coin sizes instead.

There’s an elemental star symbol that you’ll see sometimes, and it looks like a cluster of seven other symbols found in the game. This shows up on the second, third and fourth reels only in the Elementium video slot, and it will substitute for anything other than the scatter symbol. With that having been said, it does not get its own payouts since it doesn’t appear on all reels. Instead, it gives value in a different way by acting as an expanding wild. When it shows up on the reels, it will expand vertically in both directions to cover the entire reel every single time it appears.

While this gives you better chances to hit both multi-line wins and longer winning combinations, you have to also consider the fact that it helps you to get paid in both directions. This means that you will have better chances to win both left-to-right and right-to-left in this game because of the expanding wild elemental star symbols. This plays into the high hit-rate aspect of the game, and it lowers the volatility by giving you more small and medium wins.

The purple crystal in this game is a scattered bonus symbol. It appears on all five reels, and it’s the key to getting a shot at the free spins bonus feature. You’ll have a chance to win four free spins for three of this crystal or six free spins for four of it. Five of the crystal bonus symbol anywhere on the reels in any position will reward you with the maximum of eight free spins.

All of your payouts during the free spins are given a 2x multiplier. You’ll also have a random wild symbol during the free spins that alternates from spin to spin. The way this works is that a random symbol from the regular-paying symbol set is chosen before each spin. That symbol becomes wild for that particular free spin, and then after the spin, another symbol is picked at random. This adds even more value to the free spins and gives you chances to hit even more winning combinations.

In the Elementium slot, there are three symbols that make up the top tier of payouts. The golden yin-yang symbol, which represents the element of “spirit,” is the top-paying symbol. That makes complete sense because in most systems of elements before the level of science we have now, the idea of spirit or life trumped everything else. Five of this symbol gets you 200x. Remember, however, that five-of-a-kind wins are effectively doubled because they are paid to you in both directions.

The fire element comes next, and it’s worth 120x for five of a kind. Up next is the counterpart to the fire symbol, which is the water symbol. It gets you a 75x win for a five-of-a-kind combination. These three symbols offer pretty decent payouts that can be doubled in the free spins feature, and they’re all a part of a particularly balanced overall pay table.

There are four low-tier elemental symbols that offer pays that are pretty close in value to each other. It starts with the ice symbol. You can tell the difference between the ice and water symbols by noting that the ice symbol is white in the majority of the center of the symbol, and it has more of a triangular style than the round water symbol. Five of the ice elemental earns players a 40x win. The stone or earth element is up next, and it offers a 30x payout for five. Five of the green plant symbol gets players 25x, and you can win 20x for five of the metal symbol, which is the lowest-paying symbol in the game.

One of the reasons these symbols are bunched together at the bottom of the pay table is that a lot of the value in this game comes from multi-line payouts, especially thanks to the fact that it pays in both directions and that it has expanding wild symbols. Keep that in mind if they look at bit on the small side because these game features compensate for that quite a bit.

A big part of the appeal of a game like Saucify’s Elementium slot is that it’s geared towards a very specific style of play that a lot of players enjoy, even if it’s not the only type of game they prefer. It uses a combination of game features and a balanced pay table with a structure that makes sense to give players a low-volatility experience with a pretty reasonable hit-rate. The end result is that you get a lot of small and medium payouts without the big, long swings that can come from games with a higher volatility.