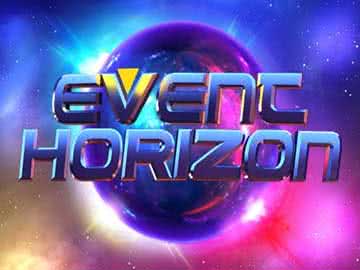 The Event Horizon video slot by BetSoft is a video slot with a lot of classic slot inspiration that gives players a great crossover between the two genres. A linked reels feature dominates the gameplay to give players a very high hit-rate and a fairly low volatility with 243 ways to win.

There are certain motifs that come from classic slots that any fan of the genre will recognize. Many of those motifs are drawn into the Event Horizon online slot by BetSoft. These are put in juxtaposition to  an outer space theme, which you can see from the name of the game and the background graphics to create a fun and relaxing atmosphere. The gameplay style is particularly relaxing as well, and it’s set up to give players a very high hit-rate. This means a particularly low volatility, which is perfect for players who want to just sit back and relax while enjoying a fun game.

Format and Layout for the Event Horizon Slot

This is a game where the format is extremely important to the overall resulting gameplay and the experience that the player gets from enjoying this title. There are five reels and three rows, which is about as normal as you can get when it comes to a video slot. However, this game also uses the 243-ways format. This sets things up so that symbols pay like left-to-right scatters. You get three-of-a-kind winning combinations by having matching symbols appear on the first reel, the second reel and the third reel, for example, and it doesn’t matter where they show up on those reels because you get a payout regardless. 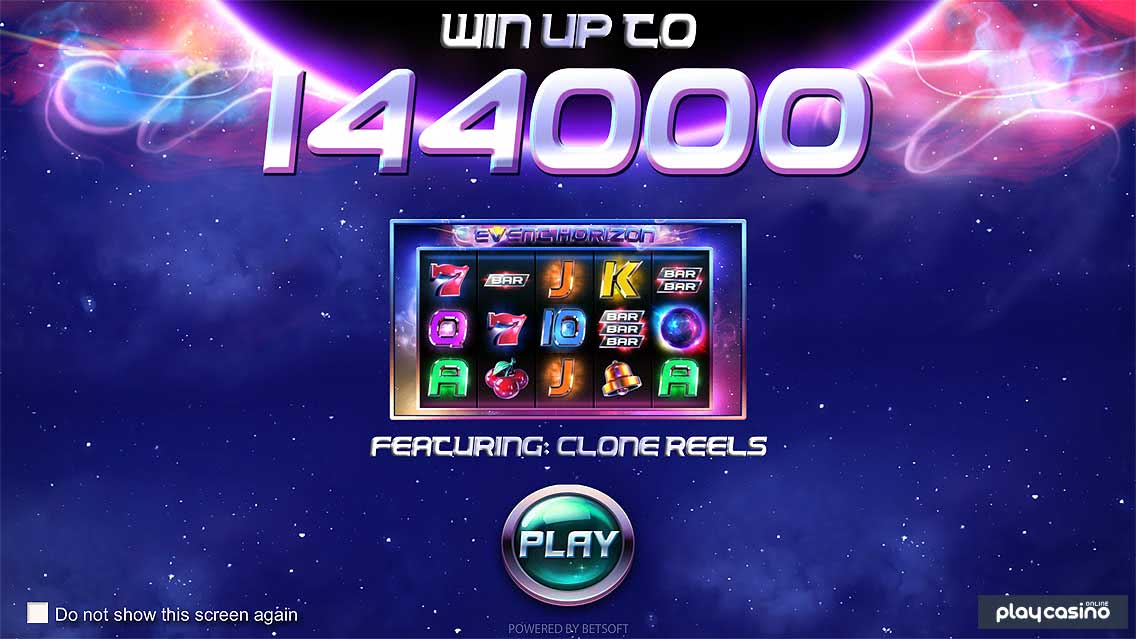 Your betting is not centered around 243 coins, however. Instead, it’s only based on 25 coins per turn. You can bet in increments of 25 including 25, 50, 75, 100 or 125 coins per spin, and this helps players to really get the bet size that they want for their play. When you combine this with coin sizes that go from $0.01 to $0.25 apiece, the overall betting range becomes $0.25 to $31.25 per turn. The maximum bet size here isn’t as large as what you might find in some other games, but the minimum is definitely small enough that the vast majority of players will feel comfortable playing at those stakes at the very least. 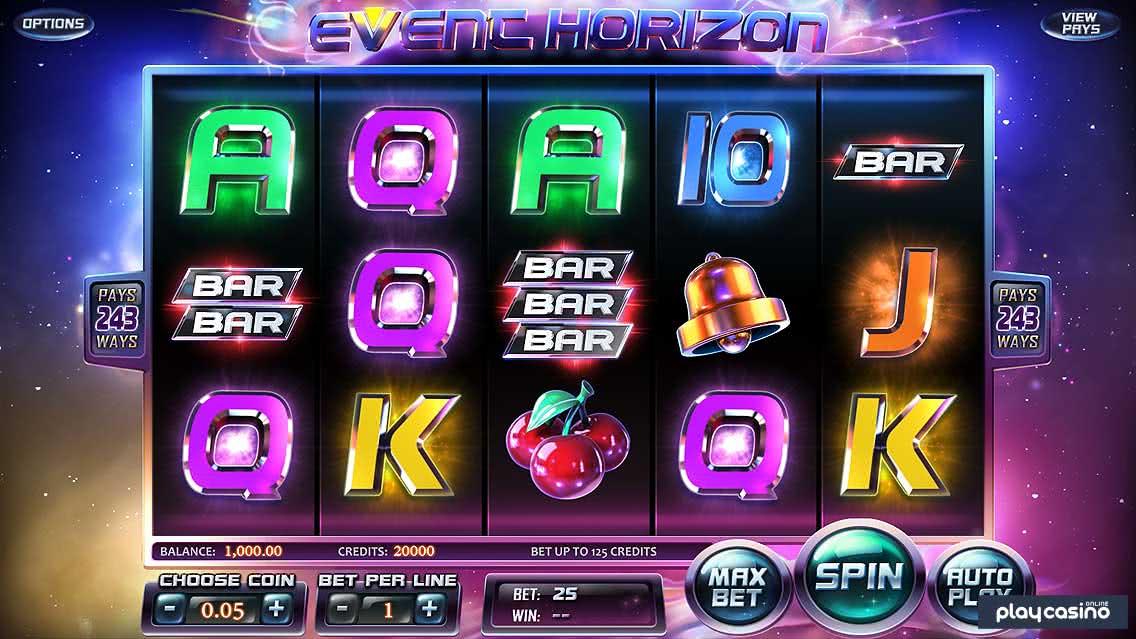 There’s a symbol in this game that looks like a round planet or maybe a moon that’s in the middle of an eclipse. Regardless of what you want to call it, there are no other symbols that look like it in this game, and this is the wild symbol. As you’ll see from how the other main feature works in this game, the wild can become a pretty important part of how some of your payouts play out, and it will definitely help you to get some wins that you would have missed out on otherwise.

Aside from that, it does not appear on every reel, so it will not give you specific payouts on its own. Instead, in normal gameplay, it only shows up on the second, third, fourth and fifth reels. That’s okay, however, because with the 243-ways format used in the Event Horizon online slot, you don’t really need wilds on the first reel all that much when they show up on all of the other reels instead. You’ll still get a nice amount of extra wins that the wild planet symbols will help you with in this game. 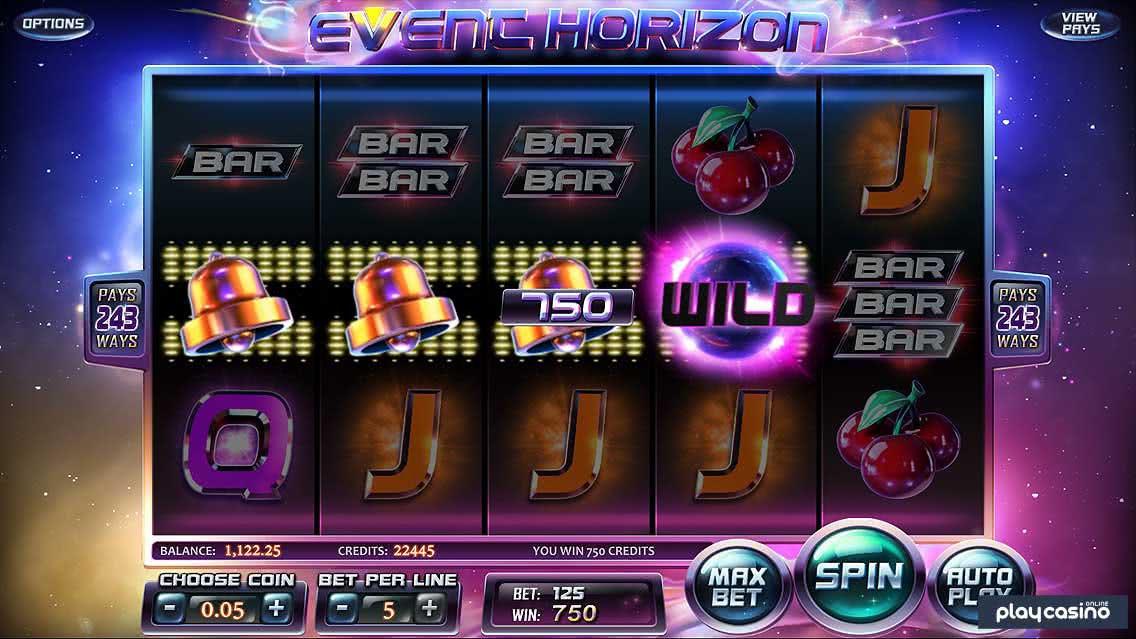 The main feature that drives the majority of the gameplay for this title is the Sync Reels feature. It’s designed to kick the hit-rate up a notch in a major way, and it does that in two different directions. First, it makes it much easier to hit multiple wins on the same spin as a whole. However, it also makes it easier to hit longer individual combinations than you would have gotten otherwise. Combined with the wild symbol, it offers some serious chances to get paid more often than you do in other comparable slots.

The Event Horizon online slot’s sync reels feature works like this. Once the reels start, you can have two or more adjacent reels sync up. When they do this, they will show the same exact symbols in the same exact order. You’ll get at least two reels to sync up on every single spin, so you’re essentially playing a four-reel game for all intents and purposes, and that makes it easy to see how you can get some serious payouts.

What’s more is that two, three, four or even all five reels can sync up like this. If you get all five, then you’re guaranteed some serious payouts, and that’s obviously a pretty big deal. 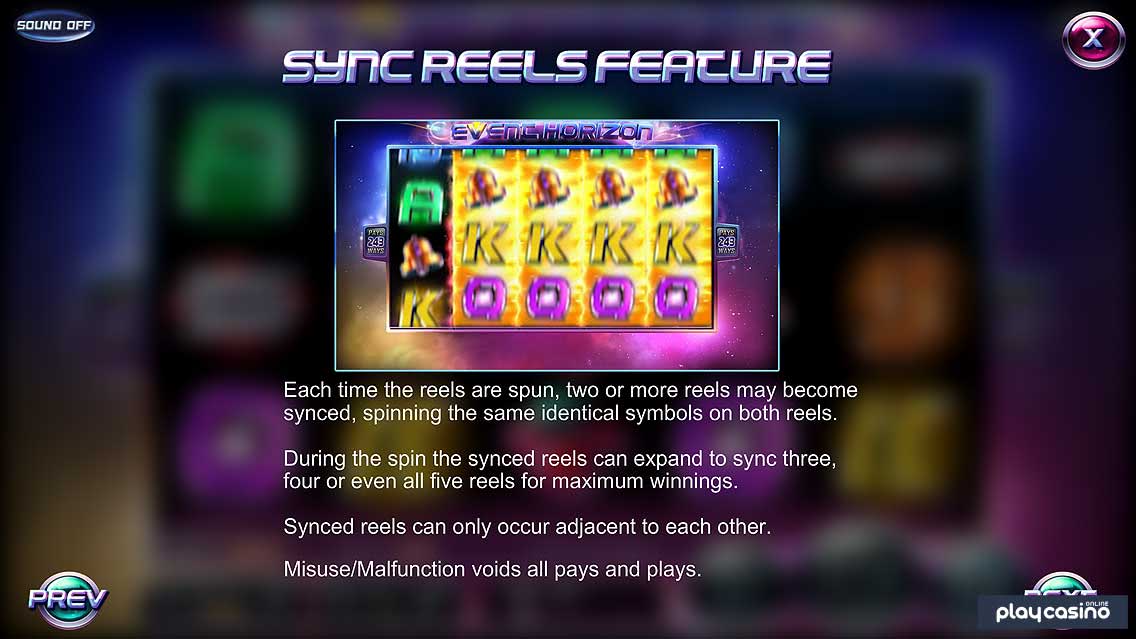 Aside from the wild, the most important symbol in this game is the lucky red seven. This ties things into the classic slot throwback theme that this title is largely centered around, and it’s so important becaue it’s responsible for the largest payouts available. You can earn 1,000x for five of this symbol in a row. You can also pick up 250x for four or 50x for three of a kind combinations. This symbol is responsible for quite a bit of value in the Event Horizon video slot, and if you get it duplicated with the Sync Reels feature, it makes it that much easier to cash in on these big wins. 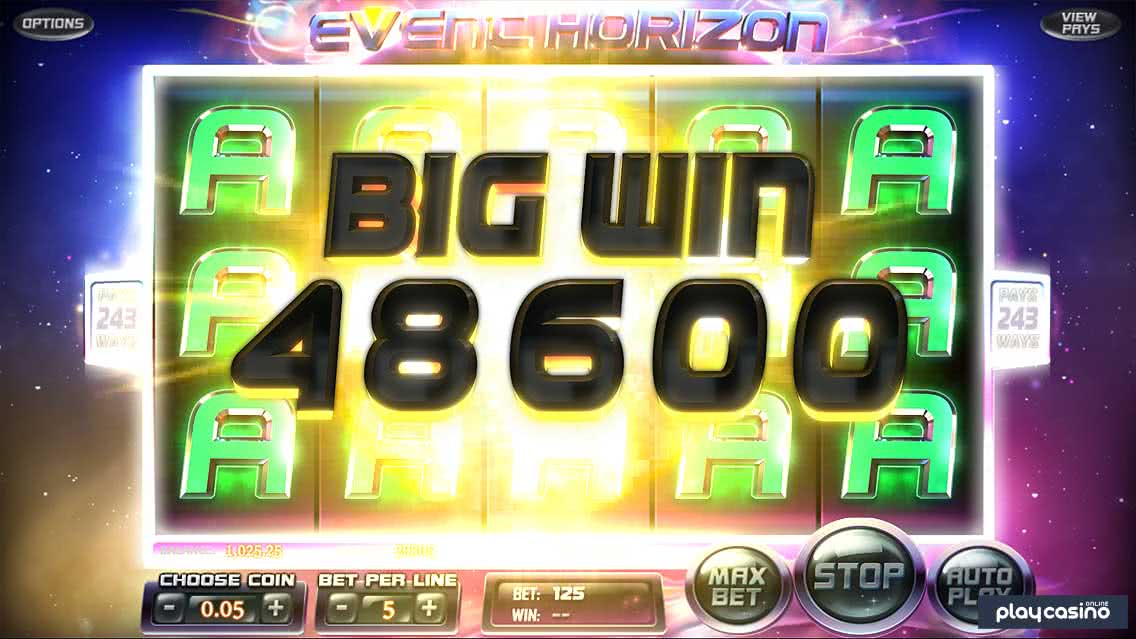 Some other throwback symbols to the days of three-reels slots are on the reels as well, and they make up the mid-level payouts. You can earn 500x for five of the liberty bell, for example. Next up is the triple bar, which gives you 400x for five of a kind. The pays for the double bar and single bar are the same at the 250x level. Things drop down significantly to the 40x level for five of the cherry, however, which is historically a low-paying symbol in classic-style games.

Five card rank symbols in a futuristic font and neon colors, which match up more with the space aspect of the theme than anything else, round out the lower end of the pay table. With the cherry, the green A and yellow K symbols each pay out 40x for five of a kind. You can earn 25x for five of the purple Q, the orange J or the blue 10 as well. These pays might seem low, but remember that they are the smallest pays in the game, and you get plenty of opportunities for multi-line prizes. 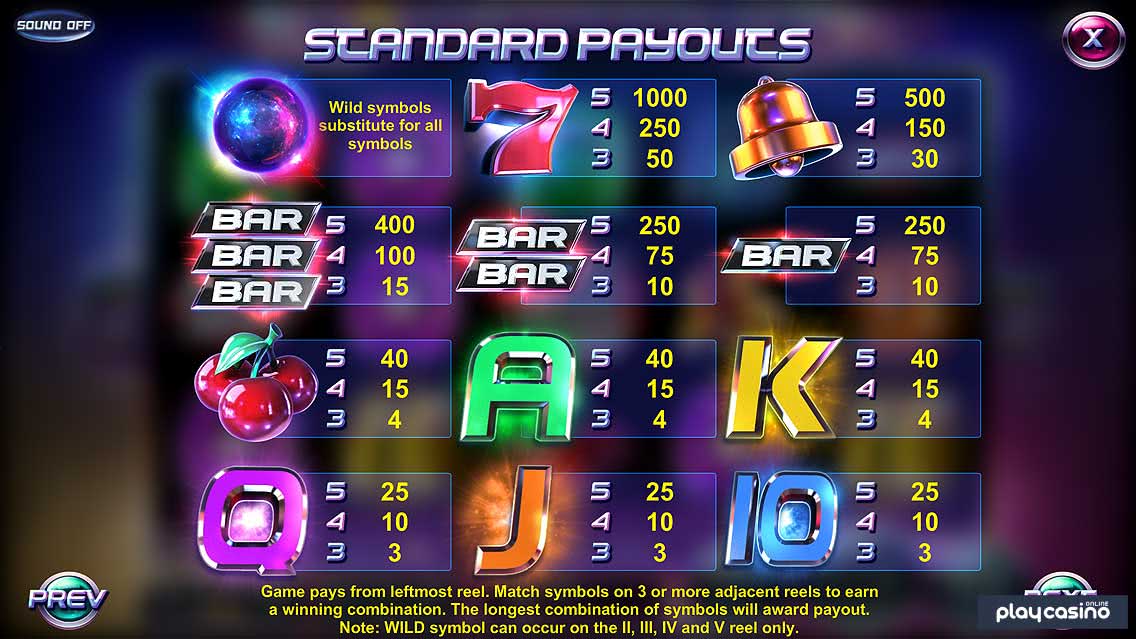 What you’re going to get with this game is a particular style of play based completely around giving you a lot of wins, many of which will be at the low or medium level. Something else the Event Horizon online slot offers is a fun type of theme and visual appeal that you don’t see everyday. It’s a good mix of gameplay and aesthetics that helps to produce a very relaxing experience, and that makes it an important part of BetSoft’s overall portfolio.