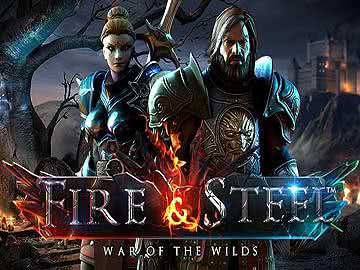 Fire and Steel is a slot by BetSoft that features a unique format and lots of wild features across 20 paylines of action and free spins.

Swordsmen and shieldmaidens have been the center of countless stories. They were the warrior class in medieval times, and their adventures are extremely interesting. BetSoft has taken advantage of this with the Fire and Steel slot, but they haven’t just relied on an interesting theme and motif. Instead, they’ve incorporated a different type of format than most players have ever seen along with features that take advantage of that format to give you a really incredible type of experience that stands out. This shows why it’s not surprising that this is one of their most popular releases.

Format and Layout of the Fire and Steel Slot

The first look you take at this game may have you scratching your head a little to figure out how the structure and format of the game works. You’ll have five vertical reels, but they have different numbers of rows. There are three rows on the first and fifth reels, and you’ll find four rows on the second and fourth reels. The center reel has five rows of symbols, and this all becomes important when you see how the features work.

The paylines are a bit more usual with 20 ways to get paid on each spin. Betting centers around coins that go from $0.02 to $1 apiece, and you can wager up to five coins per payline. The maximum bet is $100, which is plenty for even the highest of high rollers, and the minimum wager is $0.40 per spin, which is small enough for virtually anyone. Even though they’re using an atypical layout here, they’ve made sure the betting is easy to understand with bet sizes at different levels for players with different sizes of bankrolls.

We need to also point out that all wins are paid both left-to-right and right-to-left in this game. 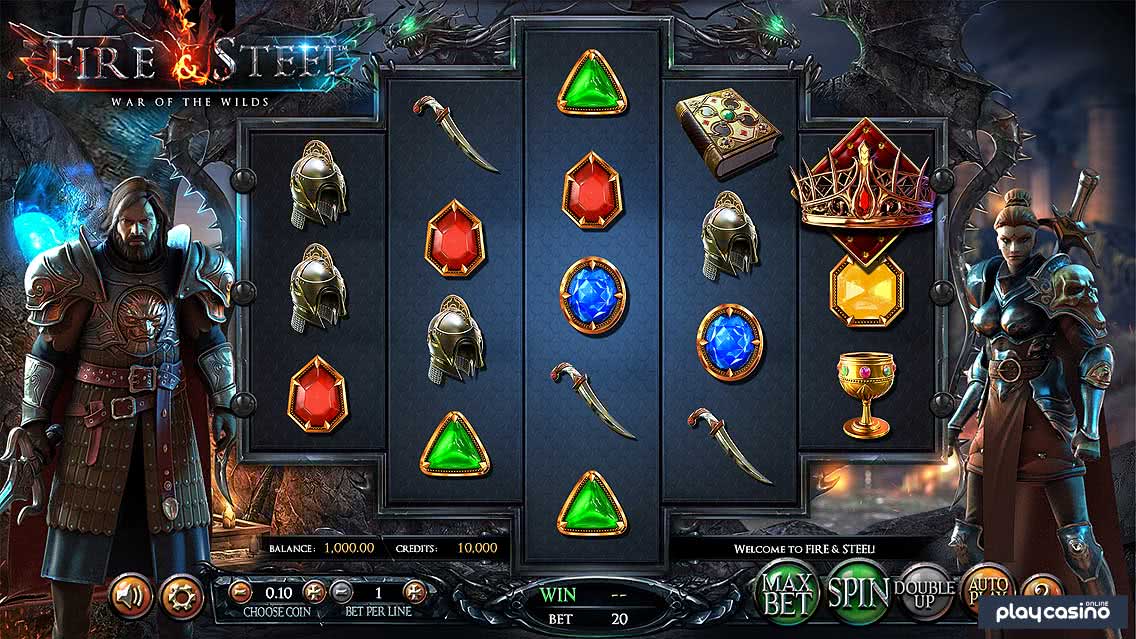 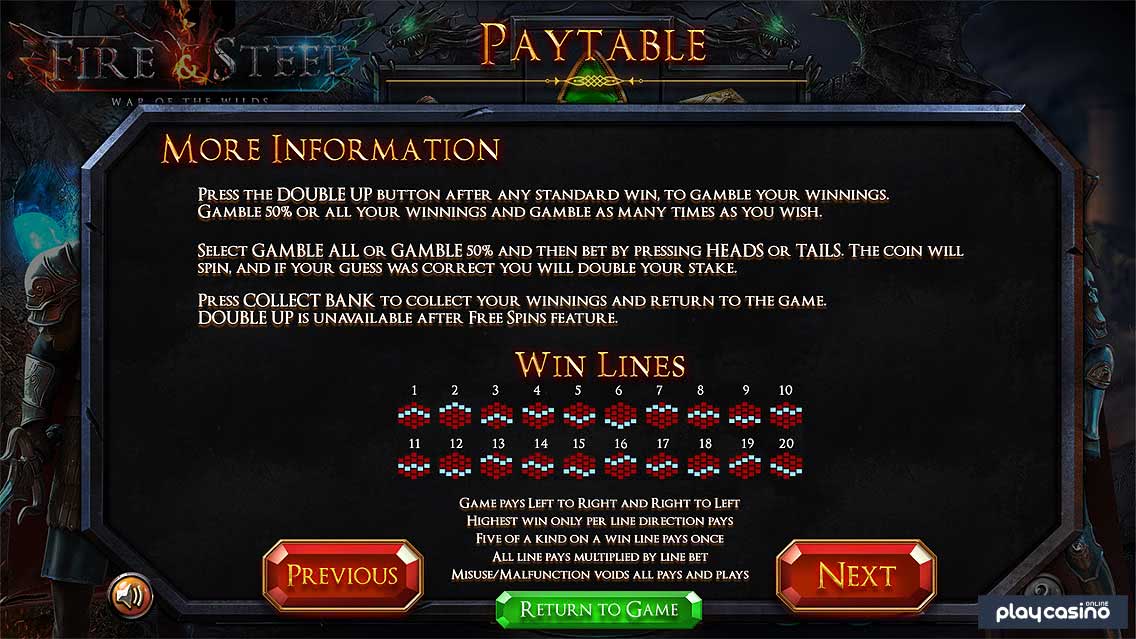 The Fire and Steel video slot stands out in a big way because it has three different wild symbols. One is a regular wild, but the swordsman and shieldmaiden (ie: a woman warrior) are wild as well. They all substitute for each other, and they have different roles in the game overall as far as the gameplay goes. However, once you get them on the screen, they’re all essentially the same outside of how they interact for specific features.

The win for five wilds, no matter which combination of them you get, is 500x. Four of a kind pays 150x, and you can also earn 40x for three of a kind. These wilds are the most important symbols in the game. 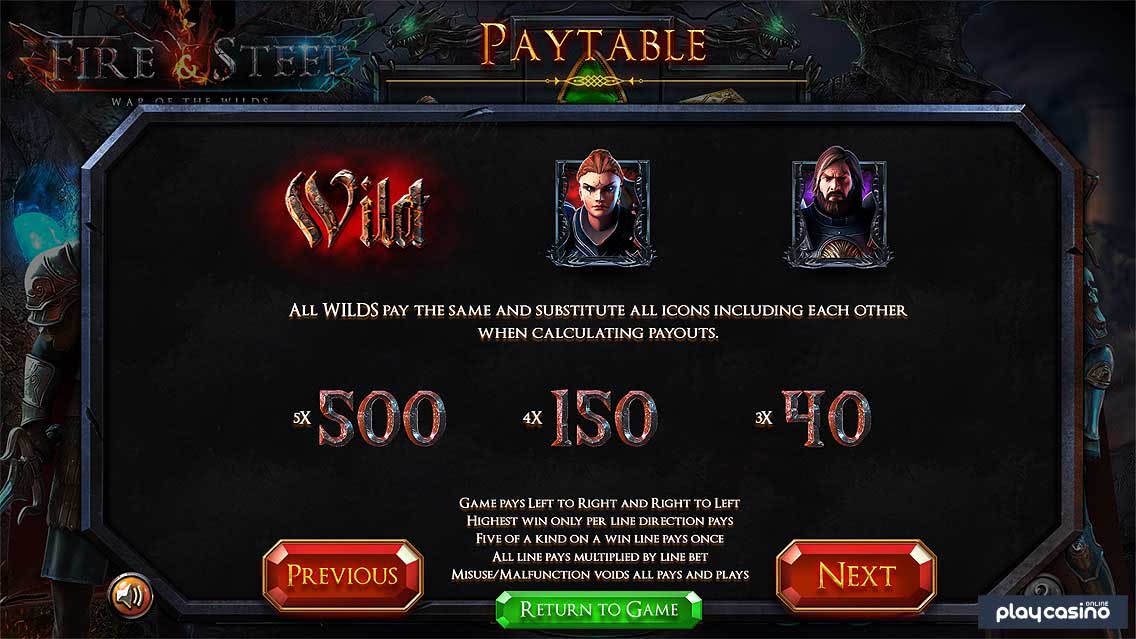 The swordsman and shieldmaiden are special symbols that always activate a special feature when either of them appear on the reels. The swordsman will release a vertical wild beam either up or down that will turn every symbol in its path into a wild symbol. Along similar lines, the Fire and Steel online slot has the shieldmaiden send out horizontal wild beams either to the left or right, sending one symbol per reel to become wild.

These wild beams add lots of ways to get multi-line payouts and extra wins on the reels, especially when you get both of them at the same time, which releases even more features. 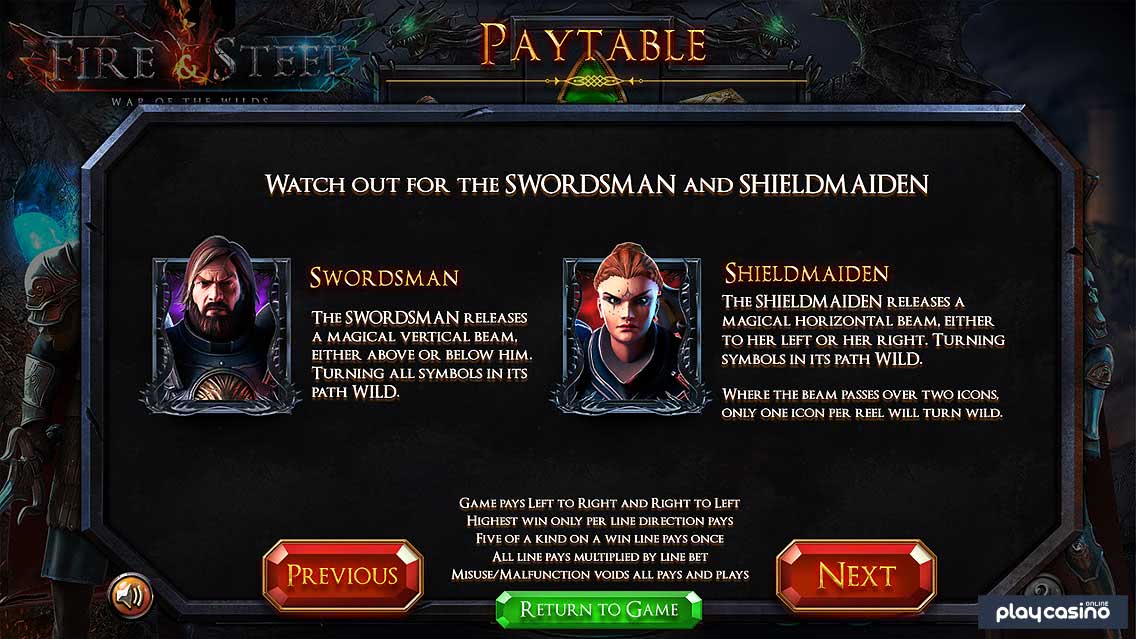 War of the Wilds Free Spins

If you get both magical wild beams on the reels at the same time, and they intersect, then you’ll get a set of free spins. The place where the beams intersect will leave one wild symbol that’s sticky throughout the entire free spins feature. You start with 10 free spins, and you can get an additional 10 for re-triggering the feature, which will also leave a second sticky wild for the remainder of your free spins bonus feature. You can end up with multiple sticky wilds during your free spins, and that obviously makes it easier to get paid during this bonus round than during the regular gameplay. 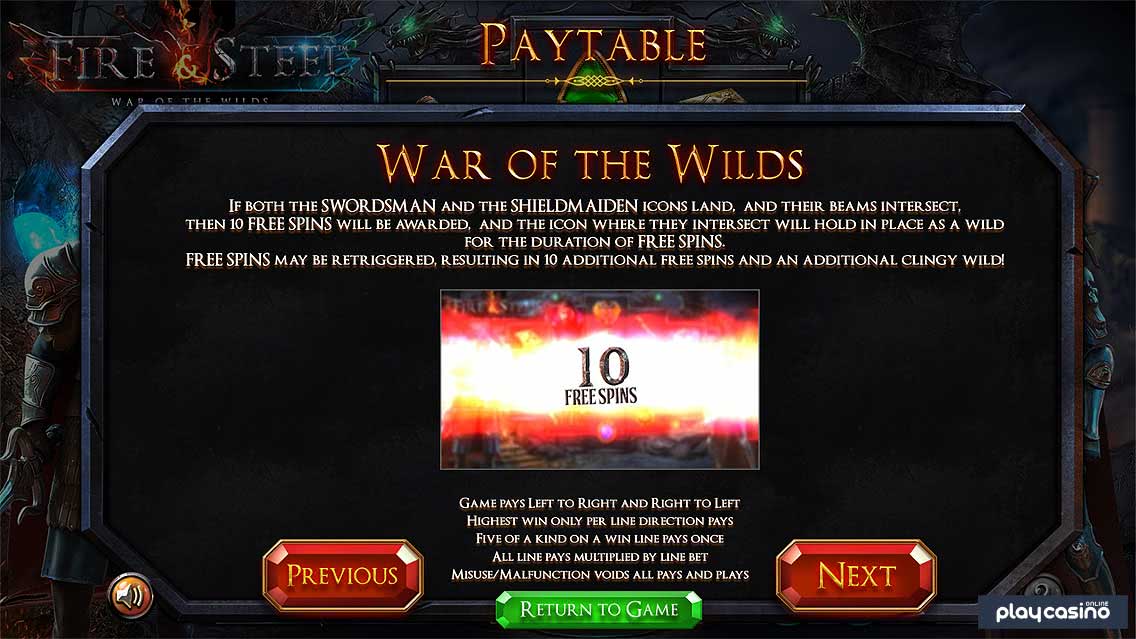 Aside from the wild symbols, there are three other symbols that you’ll want to pay close attention to. The crown with a red jewel on a red diamond background is the first of these, and five of it will get you a 250x payout. You’ll also have a blue shield and a yellow shield, each of which has wings coming off of it. These have the same payouts as each other, and that comes in at the 150x level for five of a kind on a payline. The graphics used with these symbols in particular look great, and you can tell that BetSoft took time on what they were doing from a visual standpoint. 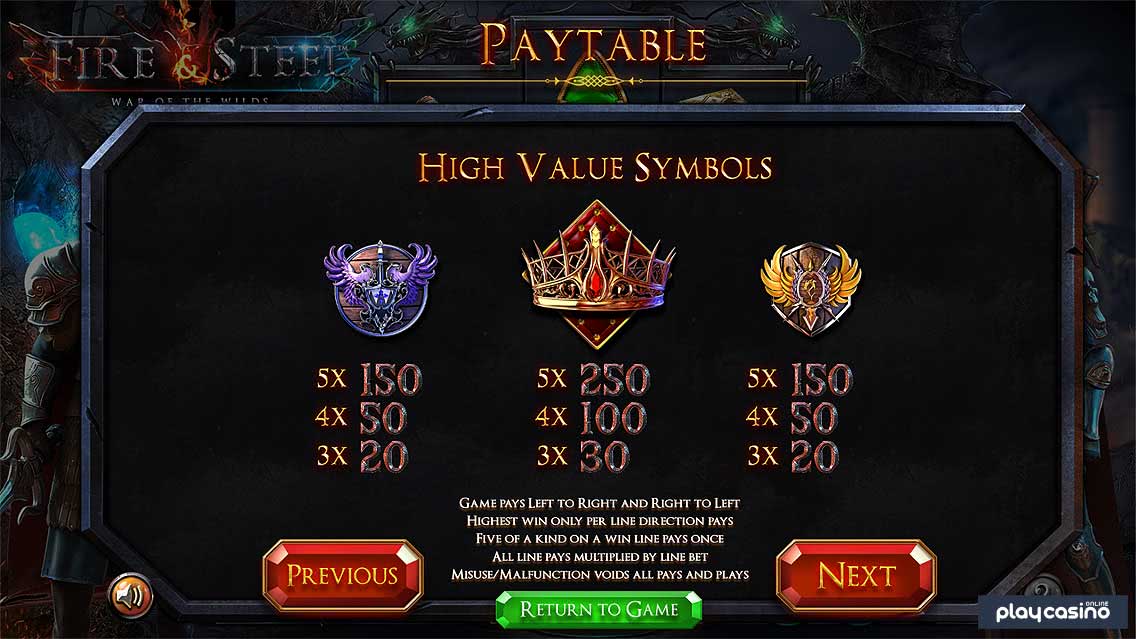 Moving down the Fire and Steel online slot’s pay table a bit, you get to the mid-level symbols. These four symbols are various symbols that make sense for the time period in which this game is set. The jewel-encrusted book pays 100x, and you can win 80x for five of a kind of the golden cup with red and green jewels around the rim. A payout of 60x is yours for five-of-a-kind combinations of the helmet symbol. You can also pick up 50x when you line up five of the dagger. 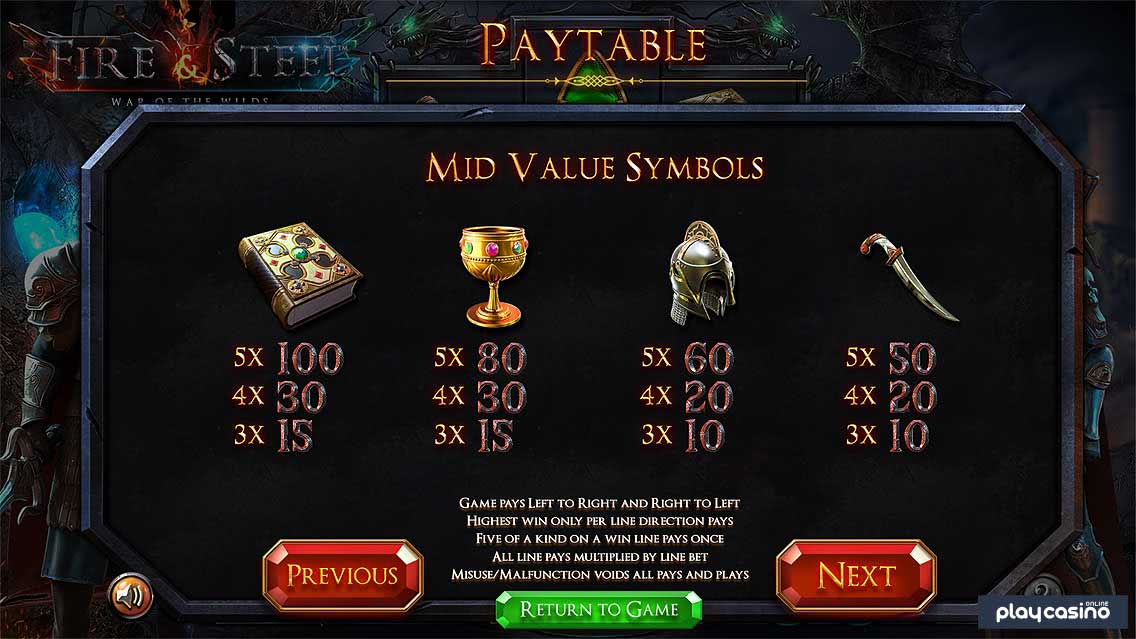 A lot of software providers are a little on the lazy side when it comes to the lowest-tier symbols in their slots. BetSoft avoided that trap in the Fire and Steel video slot. Instead, they used five different jewel symbols that look great and that fit the theme of the game absolutely perfectly.

First up is the green gem in the shape of a triangle; five of this one earns a 30x win. You can also get 30x for five of a kind of the blue gem that comes as an oval. The pentagon (five-sided), red gem earns 20x when you line up five on a payline. This is the same payout as five of a kind of the orange hexagon or yellow octagon, since all three of the lowest symbols on the pay table have the exact same wins available.

Keep in mind that while some of these pays look a bit on the low side, you can get paid in both directions, and there are a lot of ways to get wilds on the reels. This makes it easier to hit these payouts, which in turn makes them more valuable than they might seem at first glance. 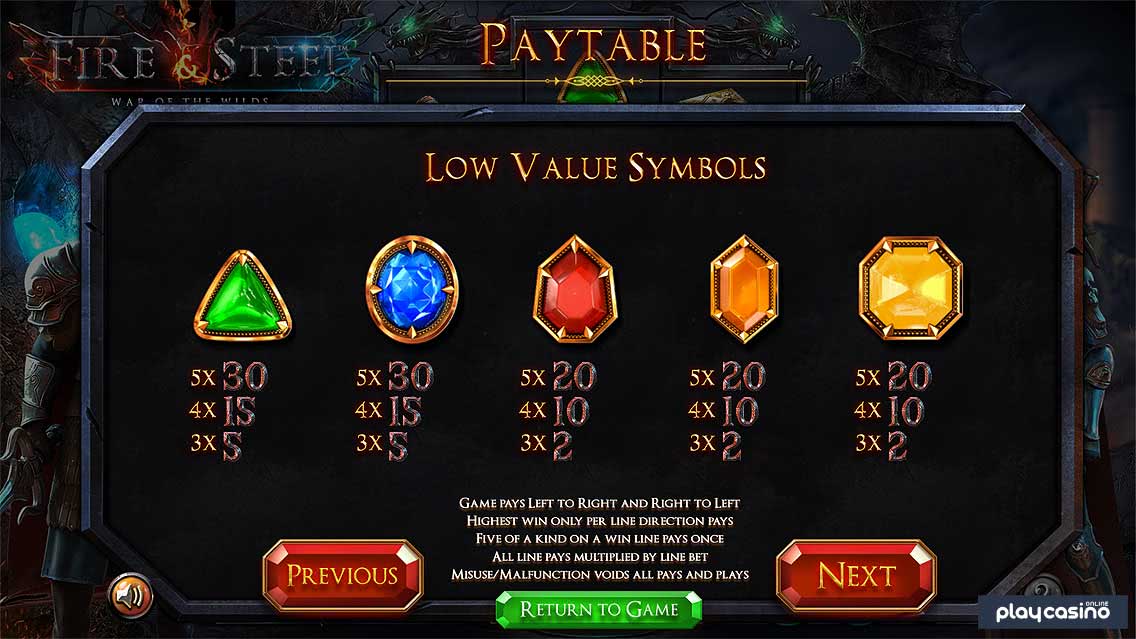 You generally need two things to have a strong online slot: gameplay and graphics. BetSoft’s Fire and Steel online slot has both of those things, but it also has a cool and atypical layout that drives the action and that works with the innovative wild features to give you a great hit-rate. There are still chances to win pretty strong payouts in spite of the pay table itself being fairly balanced and the volatility being pretty reasonable as well.