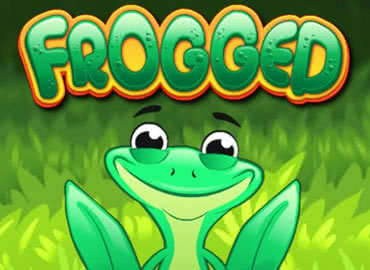 The Frogged video slot by Rival Gaming is an excellent game based on the Frogger video game from several decades ago with 20 paylines and appropriate graphics.

If you know much at all about the history of video games, or even if you were just alive during the 1980s, then you know about Frogger. Frogger was a video game based around the premise of trying to cross the street as a frog, and the Frogged video slot by Rival Gaming is based completely around this classic video game. The graphics are stylized in a pixelated visual style that looks great, and every aspect of this game has been pulled into the theme extremely well.

Format for the Frogged Slot

The format for this game is based on 20 paylines spread across five reels of action. Naturally, there are three rows of symbols. Your bet sizes run from $0.20 at the low end to $50 at the high end, and that’s based on coin sizes that go from $0.01 to $0.25 apiece. Since you can bet as many as 10 coins on each payline, that facilitates a lot of customization of your bet size as a whole. This game has a reasonable hit-rate with a bit of volatility because of the amount of value tied up in the bonus features, but it all makes sense in the context of the theme of the game, so it works out really well.

The first thing to look at on the reels is the frog symbol, and he’s the wild. This makes sense considering he’s the main character of the Frogger video game in the first place. Whenever he shows up on the reels, he will expand upwards like he’s walking across the road, just like he does in the video game. He will show up on all of the reels, but he does not get his own payout. He substitute for anything but the scattered symbols in this game, and he acts as a sort of upwardly expanding wild. This wild can help you to get multi-line wins and other payouts that you would not have otherwise been awarded, so he’s obviously a good value.

It’s really easy to get a set of free spins in this game because all you have to do is get one of the bulldozer symbols somewhere on the reels. It pays out a set of seven free spins. However, during this free spins, if you get three of the bulldozer symbols again, then you will be taken to the River Rapids bonus feature. The idea behind this feature is that in the Frogger game, whenever you got past the street with cars going across, you had to make your way across a river by hopping across logs and along the backs of alligators.

During the River Rapids round, you get free spins with a different set of symbols. We’ll look at those symbols below, but the sticky wild fly symbol is the most important one. Whenever you get at least one wild fly on the reels during this feature, you’ll get your wins awarded, and then the rest of the symbols will re-spin with the fly in place to give you another chance to hit some winnings. Even more flies coming up on the reels will give you even more re-spins, so it’s clear that you can hit some pretty major payouts here.

Important Payouts in the Frogged Slot

During the regular gameplay, the main payouts are based on the vehicles that the frog character has to dodge to avoid getting the pancake treatment on the pavement. The bulldozer pays 10 times your total bet size, which is like a 200x payline win, for five of a kind as a scatter symbol. The yellow racecar is responsible the largest regular payout, and that’s a whooping 750x for five of a kind. It also pays for just two of a kind. Five of the red and white truck gives players a solid 325x payout, and you can pick up 200x for the bus as well. Five of a kind of the blue car will pay out 150x, which is reasonable for a mid-range symbol.

The lowest-paying symbols are based on the card ranks. The purple A symbol pays 100x, and the blue K gives you 60x for five of a kind. You can pick up 50x for five of the green Q or the yellow J, and players earn 40x for five of the orange 10 or the red 9. It’s important to note that these card rank symbols have been made in a pixelated graphical style, which will remind players of how the graphics looked in the original Frogger game, and that makes them fit the theme extremely well. What’s more is that it’s clear Rival Gaming put a lot of effort into how these symbols look, which means they weren’t being lazy by including them like what you see what a lot of other software providers.

Aside from those symbols, there are also four special symbols inside of the River Rapids Bonus Feature that have noteworthy payouts. The alligator, which is the bane of Frogger players, pays 1,000x for five of a kind, and the snake pays 400x for five. Each of these symbols will also give you a win for two of a kind. You can also pick up 250x for five of the more friendly turtle symbol, and the log symbol, which is the frog’s best friend on the river, is good for 150x whenever you pick up five of a kind.

Understanding the influence that Frogger had on the video game industry, and ultimately the video slot industry, will help you to understand the significance of the Frogged video slot by Rival Gaming. This slot stands out for using an older video game as a theme, which is something we have not often seen in the industry, and fresh themes like this are something that is sorely needed.

The graphical approach to this game is great with a combination of modern animated symbols and pixelated, throw-back symbols for the card rank symbols. The gameplay is also extremely solid with a reasonable hit-rate, the expanding wild symbol and two different free spin bonus round stages. The music fits right in with the overall theme as well. As a whole, Rival Gaming has put everything together in a way that makes a lot of sense and that elevates the gameplay of this title, and we don’t think that they could have done much to make this a better game for what it is.