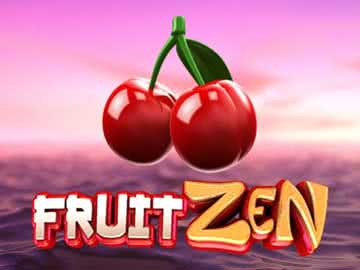 The Fruit Zen video slot is a relaxation-based game produced by BetSoft. It uses a 10-payline format with 3D fruit symbols and a soothing ocean background and Asian motifs. The expanding wild symbol gives you free re-spins as well for extra chances to win.

There’s an entire genre of online slots out there designed around giving players an extremely relaxing experience. The Fruit Zen online slot, as the name sort of implies, has this style of gameplay in mind. It’s all about putting players in a calm and relaxed state of mind while they get some chances to run up some winnings. It’s a very popular style of play, and BetSoft’s entry into the sub-genre with this particular title is done with top-tier, 3D graphics and an incredible flowing water background. As such, this may be the best-looking game in the entire sub-genre that you can find anywhere in the slots world.

Format and Layout of the Fruit Zen Slot

The format for this game is all about setting up the relaxation state of play. There are 10 paylines spread across five reels and three rows. You’ll notice that all of the reels are completely see-through so that you can see the ocean in the background, and there’s even a small crab sitting on a rock to the left to really complete the scene. The 10 paylines also pay in both directions, from left to right and from right to left, and that increases the hit-rate further.

You can select a number of options for how may paylines you want activated in this game. However, it’s best to keep it at the maximum of 10 since the minimum bet size of $0.10 is already small enough for anyone, and this will also keep the RTP rate up (which means better chances for winning sessions overall). You can bet up to 10 coins on each line for a maximum of 100 coins per spin, and the coin values top out at $1 apiece, which makes the largest available bet size $100 per turn. This is clearly a sufficient range for anyone playing at low stakes, high stakes or any level in between. 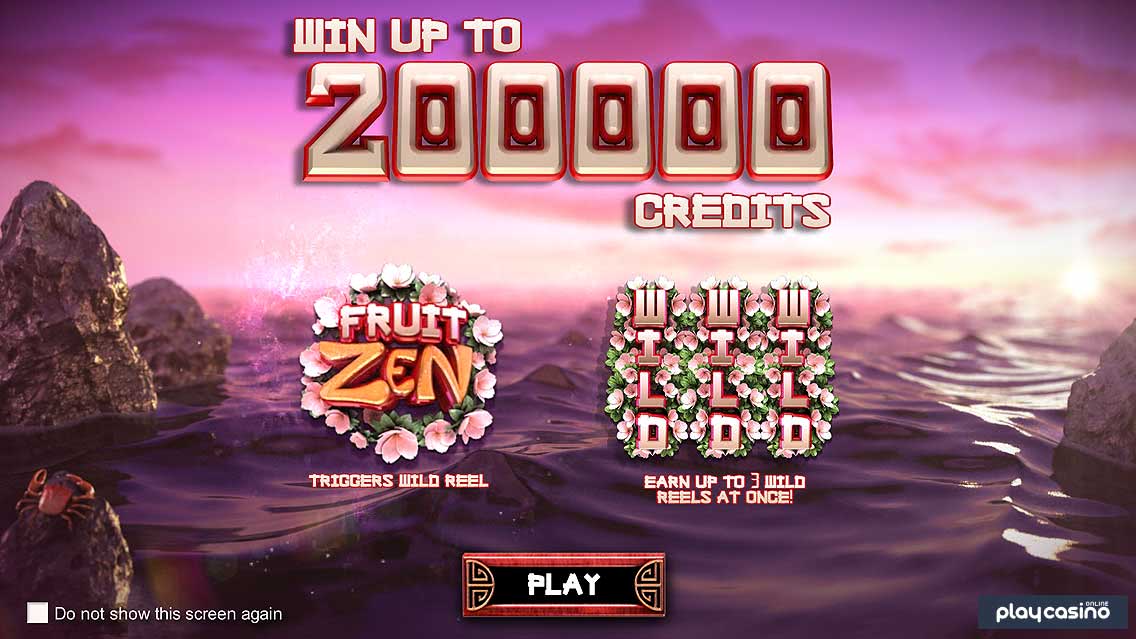 What you really need to understand about the Fruit Zen online slot before you sit down to play is that it’s geared completely towards one particular style of gameplay. This title is set up to put you in a relaxed state so that you can unwind and just enjoy some smooth action with a minimal number of swings. This is achieved through a very low-volatility pay schedule and a particularly high hit-rate.

You can see this from how the pay table as a whole is formed, but you can also see it from how you get paid in both directions and how the main features work. Every single thing about this game is about bringing the hit-rate up and the variance down, so if you’re looking for a title that’s centered around a ton of action and big, exciting jackpots, then you’ll want to check out something else in the BetSoft portfolio because that’s not what you’re going to find here.

The only symbol in this game that is not a piece of 3D fruit is the Fruit Zen video slot logo. It will show up on the second, third and fourth reels only in this slot. It’s a wild, and since it does not appear on all reels, it doesn’t give its own payouts. However, it does help you to get extra payouts that you would have missed without it, and it has some extra features associated with that make it particularly valueable. Along similar lines, it helps to increase the hit-rate, decrease the volatility and contribute heavily to the style of play that BetSoft was going for in this game.

This also an expanding symbol. Whenever you get this wild anywhere on any of the three middle reels, no matter where they show up or how many of them there are, they will expand vertically in both directions to cover the whole reel. This continues the theme of this slot giving you ways to get an increased number of wins (particularly with multiple ways to get paid on the same spin). This continues to bring the volatility down as well, and it also ties into the other major feature in this game. 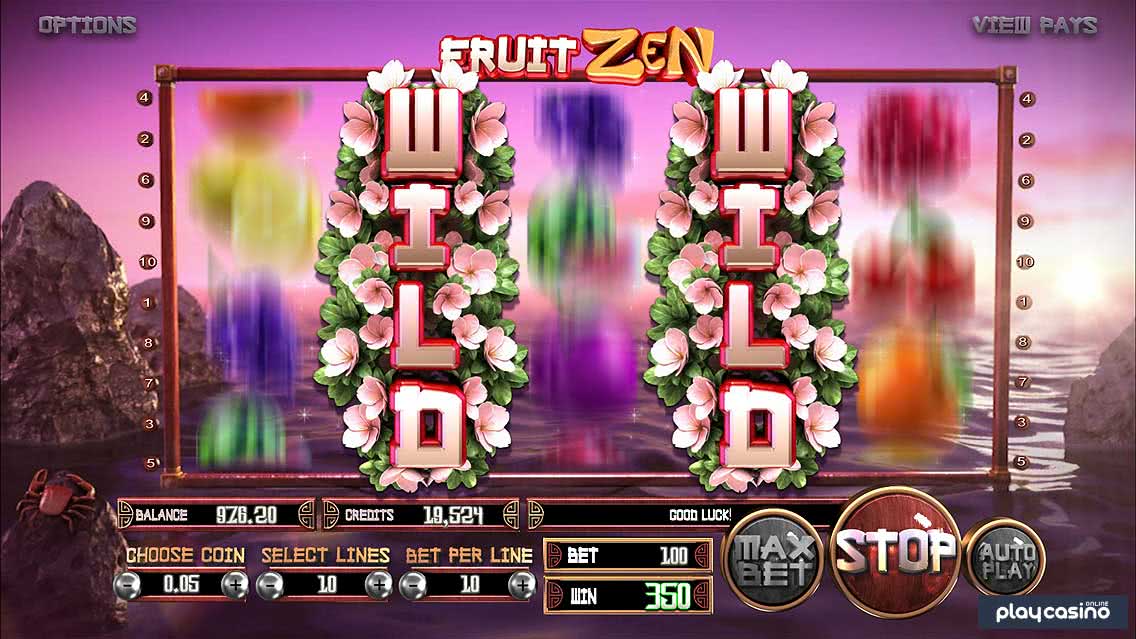 When you pick up one of those expanding wilds on the reels, you’ll be paid out normally. After that, the wilds will hold in place covering the reels they landed on while you get a free re-spin. Your new payouts that you get from this re-spin are added to your other wins, but that’s not all. If you get more wilds on the reels, they will expand and continue to give you re-spins until you have a spin where you don’t get any new wilds. This is obviously a lot of value with being able to get paid in both directions, especially if you get two or three wilds at once.

Seven different fruit symbols make their way across the reels in the Fruit Zen online slot. Because there are only seven paying symbols other than the wild, it makes it much easier to line up winning symbols. This affects the gameplay in similar ways as what we have discussed above.

At the top end of the pay table, you have the orange symbol, which pays out 250x for five of a kind. However, since you get paid in both directions, you’ll actually earn a 500x prize for hitting it, which isn’t bad at all. A win of 120x is yours for five of the lemons, which becomes 240x along similar lines. 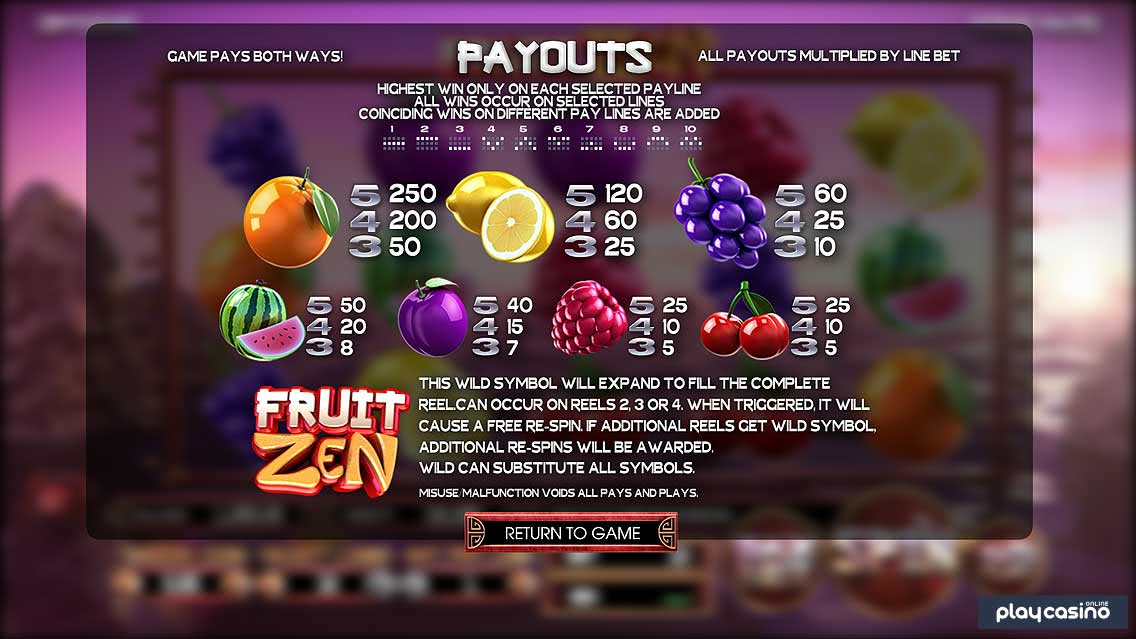 With the Fruit Zen online slot, you’re getting a game that has every single aspect of it centered around one particular style of play, and that’s a style of play that will appeal to a lot of players, especially when they just want to relax and unwind. The expanding wild re-spin feature works particularly well here, especially with the game paying in both directions, and the pay table is balanced enough while still providing chances for some decent upper-level wins that it keeps things interesting. BetSoft did a very good job with this game, and it’s not hard to understand its popularity.