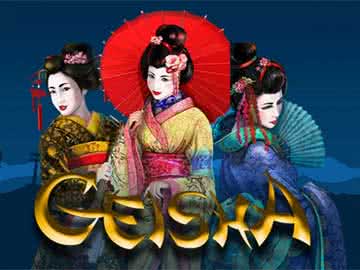 The Geisha video slot is a title produced by Endorphina that offers a gorgeous theme based on the title of the game. It also has a free spins bonus mode that offers wild multiplier geishas and an important double or nothing game that has more depth than you expect.

There’s no doubting that there are a ton of online slots out there that use different types of Asian themes. The Geisha online slot by Endorphina is one of them, but it stands out from the rest of the sub-genre by focusing specifically on the geishas and the culture surrounding them. The visual appeal of this game is tremendous, which is exactly what you’d expect considering the overall theme, and you’ll see cherry blossom pedals slowly falling in the background as you play. Along these lines, the volatility is a bit on the upper end of the medium range, but it’s not so much that the swings will bother most players.

Format and Layout of the Geisha Slot

To hold all of the action that this title has available, you’ll have a pretty reasonably sized game grid with five reels and three horizontal rows. There are also 25 paylines, and while you can change how many paylines are active at any given time, it’s a mistake to play with fewer than 25. Doing so keeps the RTP from being as high as it can be, and with the return to player percentage being lower than normal, that means worse chances of being a winner by the end of your sessions. 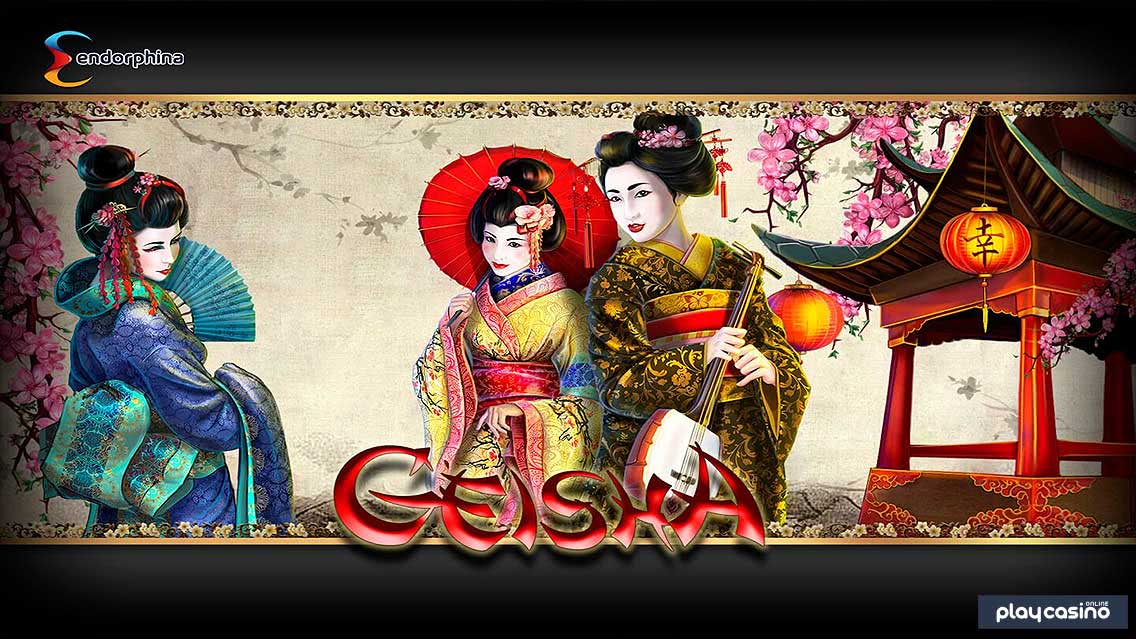 If you really want to change how much you’re betting, then keep the paylines maximized and use the other controls instead. These controls include changing from between one and ten coins on each payline along with having coin sizes that range from $0.01 to $1 apiece. The overall betting range becomes $0.25 to $250 per spin with these options, and that is enough for small stakes and high roller players alike. It’ll be difficult to find players who cannot find a wager size in that range that works out really well for them. 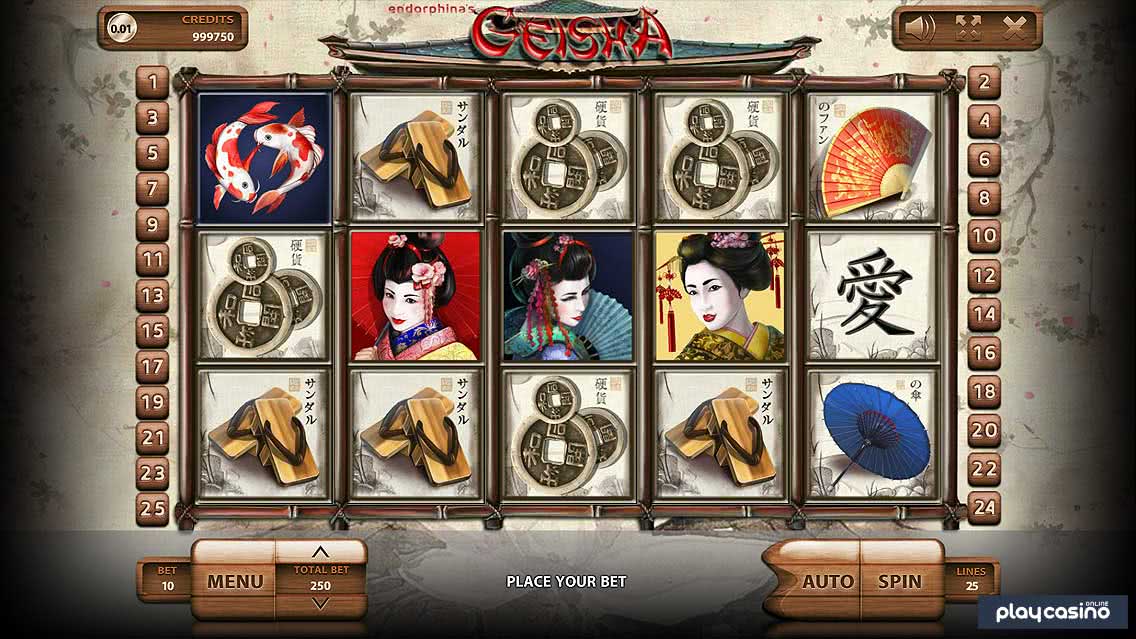 The wild symbol for the Geisha video slot is the set of two koi fish swimming in a circle. Five of a kind of this symbol gives you the second-highest payout that this game has available in the regular gameplay, and that comes in at 1,000x. A win of 500x, which isn’t anything to sneeze at, is also available if you get four of a kind on a payline. Three of the wild earns you 100x provided that a better-paying winning combination of four or five of a kind cannot be made on the same payline. This game always gives you the best available payline win for each individual line in addition to any scatter prizes. 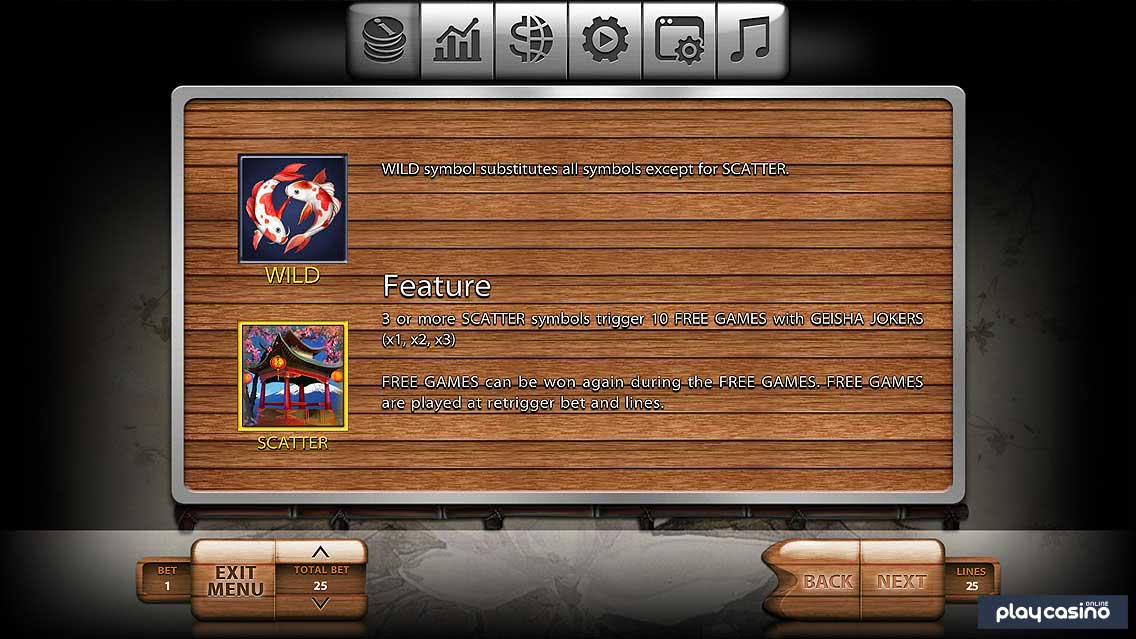 Another important symbol in this game, and perhaps the most important symbol of them all, is the temple symbol. This is a scatter symbol for the Geisha online slot. It also helps you to get the largest available win in the whole title, which is 5,000x for five of a kind. What makes this win even more impressive is that the symbols don’t even have to land on any certain payline in order to trigger it. Likewise, payouts of 500x and 50x are yours if you get four of a kind or three of a kind anywhere on the entire game board.

The free spins mode for this game is pretty cool and offers more value than you’d expect. When you get at least three of the scatters on the reels, you get 10 free spins. During these free spins, the three geisha symbols become wild multipliers with 1x, 2x and 3x multipliers. These multipliers can combine as well to give you total multipliers of up to 6x. That’s a lot of fun since that means even bigger wins can be had than what’s already available on the regular pay table, and those prizes are pretty substantial as it is. 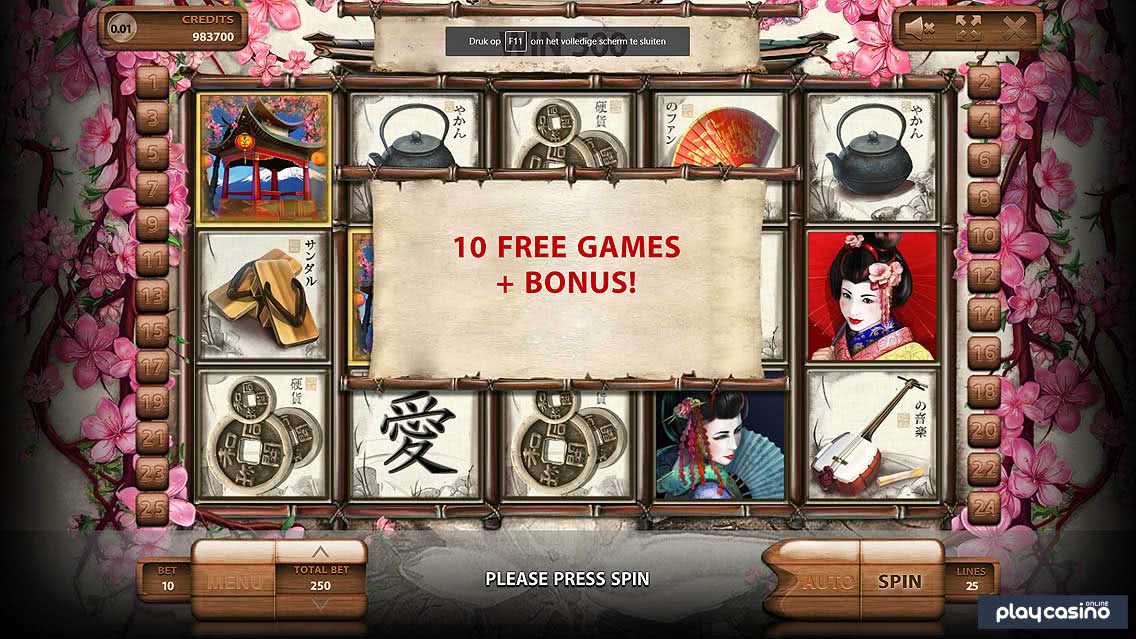 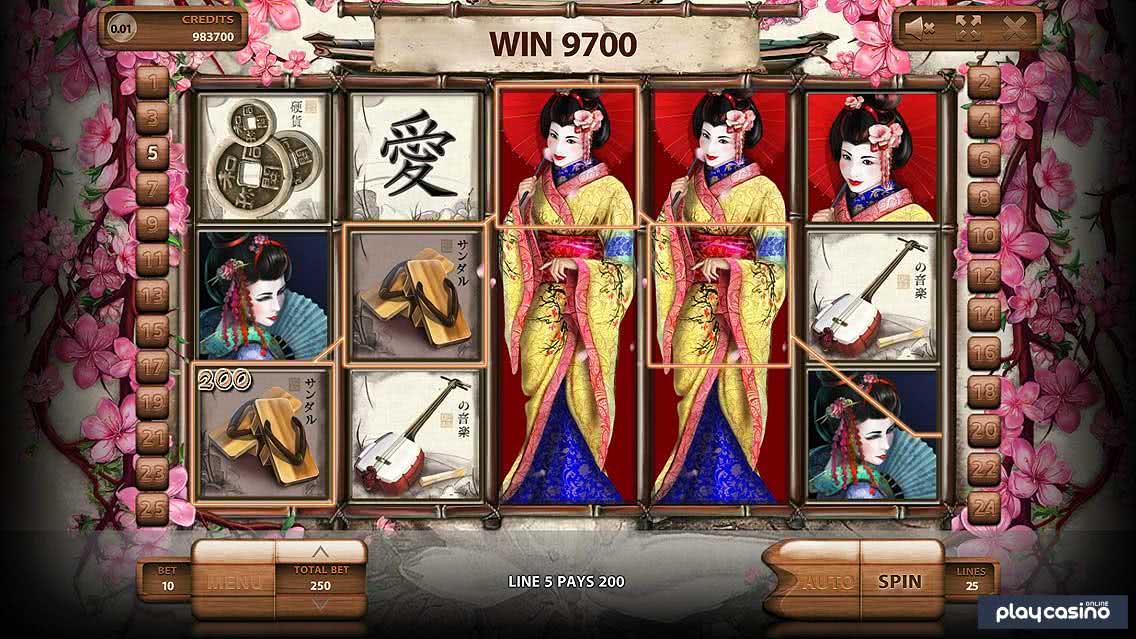 Strategy for the Gamble/Risk Game

In this title, you have to treat the gamble game differently than you do in most other instances. In most slots, you can simply ignore it, but doing that will hurt your RTP in the Geisha online slot. Instead, you should check it every time that you win, but you should only actually play it if the dealer card is showing a two, three four or five. Playing under these circumstances gives you an advantage against the house with payout rates varying from 101 percent to 162 percent. Along these lines, you can simply not play it if the card is six or higher and be completely fine. However, choosing to play the gamble game when the card shown is a nine or higher will lose you money in the long run, so it’s a particularly bad idea. 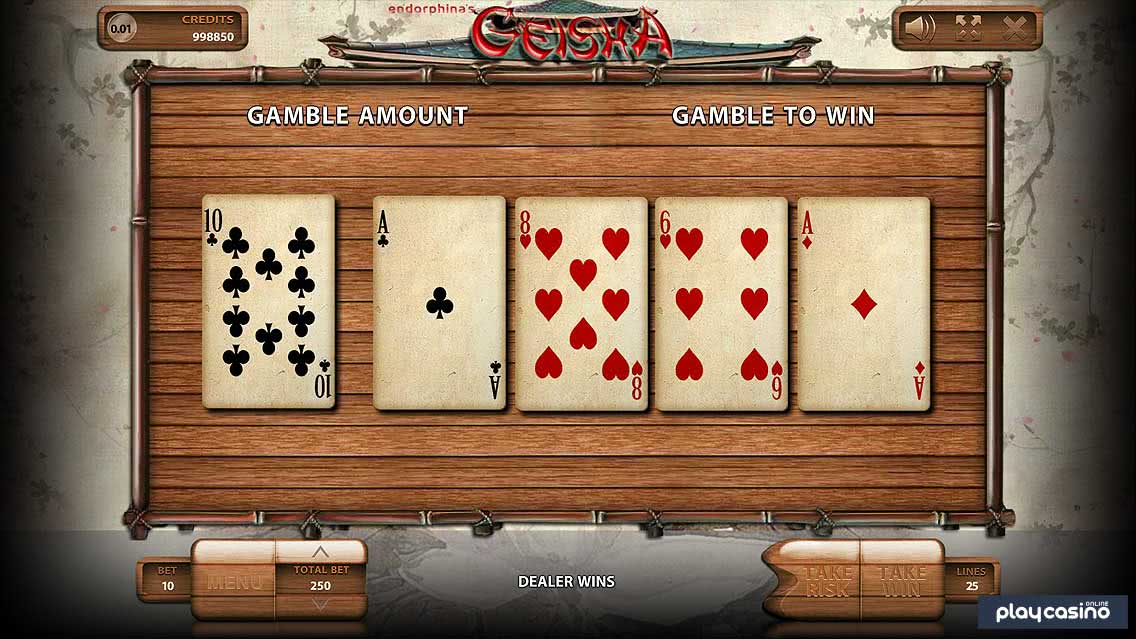 There are three geisha symbols that make up the mid-level wins available in this game. You have three different colors, and they are the same symbols that turn into wild multipliers in the free spins. In the regular game mode, however, you can pick up 800x for five of a kind of the yellow geisha. Likewise, the red and blue geishas each give you 600x payouts for five on a payline. These are strong wins that are up there in the same range as the top jackpots for many online slots. 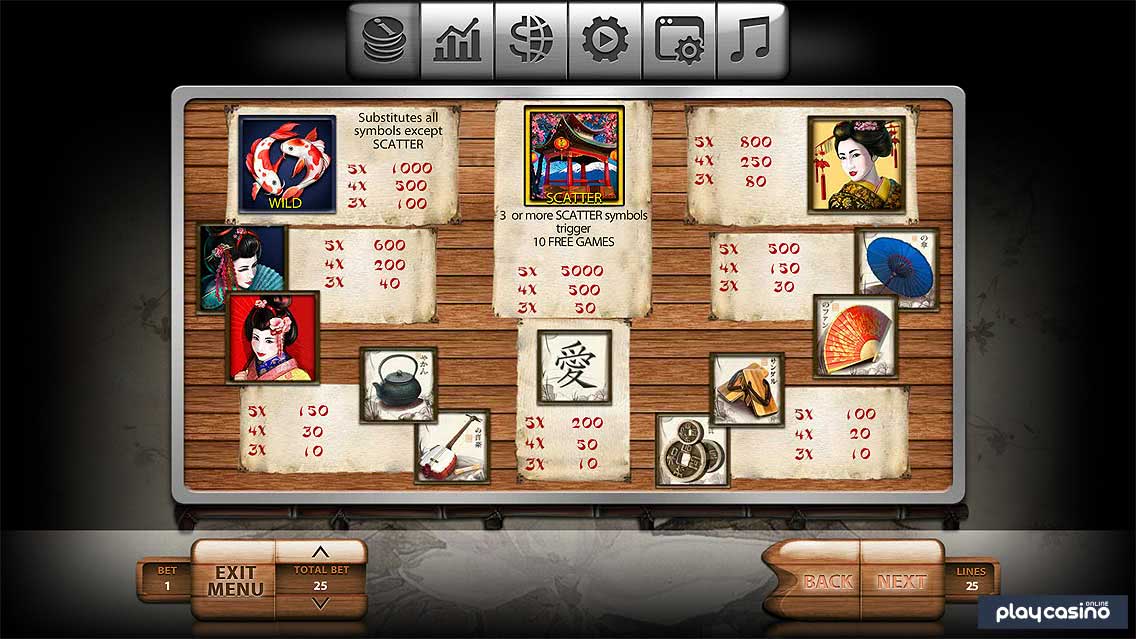 The rest of the symbol set starts with the umbrella and fan symbols, each of which pay out 500x for five of a kind. You can earn 200x for five of the Japanese symbol, and the tea kettle and mandolin each get you 150x when you’re able to line up five on an activated payline. Finally, 100x wins are yours with five of the coins or wooden shoes, which are pretty reasonable for being the lowest level wins in the whole game.

Note that all of these symbols require at least three of a kind to get a payout in this game. There are no symbols that pay for just two in this slot.

The Geisha online slot definitely breaks out of the mold that most people think of when it comes to a somewhat generic slot with an Asian theme. Endorphina did a great job with making sure that this title stands out in a variety of ways, and you can see that from the distribution of wins on the pay table along with the way the free spins mode has been differentiated from what players are used to. This is a fairly popular title as a result, and it’s not difficult to understand why that’s the case.