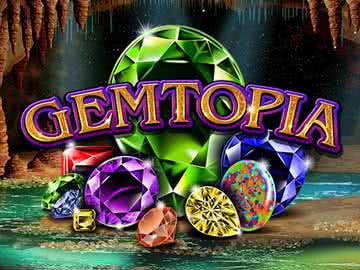 Gemtopia is a video slot by Realtime Gaming that gives players 15 paylines of gem-based action with free spins, expanding wilds and a re-spin feature.

In the late 1990s and early 2000s, there was an influx of Flash-based casual games. These included gem-matching games like Bejeweled that launched an entire genre of titles based on gems and jewels. Gemtopia is a video slot powered by Realtime Gaming that played on the same sort of jewel-based theme, but they do it in a way that doesn’t seem like a copycat effort of games that already exist. It also has extremely good gameplay and a medium level of volatility.

Format of the Gemtopia Video Slot

For the feature set that this game has available, you don’t need a lot of paylines to get a ton of action. The result of five reels, three rows and 15 paylines is perfect for the gameplay of this particular title. You’ll have the option to play with fewer than the 15 payline maximum, but we strongly suggest that you keep it at that level since the RTP will suffer if you do not.

Betting is set up so that you really just choose between a number of total bet sizes, so there is no confusion about which levels of wagers you’re picking whatsoever. That works out so that the minimum bet is at the $0.15 level, which is affordable for even players with a small bankroll. The maximum is at $3.75, which we has to admit is a little on the small side for a maximum bet in a modern video slot. However, we can’t complain too much since the resulting range of available bets will be plenty for the vast majority of players.

We also want to point out that paylines pay in both directions, left-to-right and right-to-left. However, five-of-a-kind combinations only pay once. 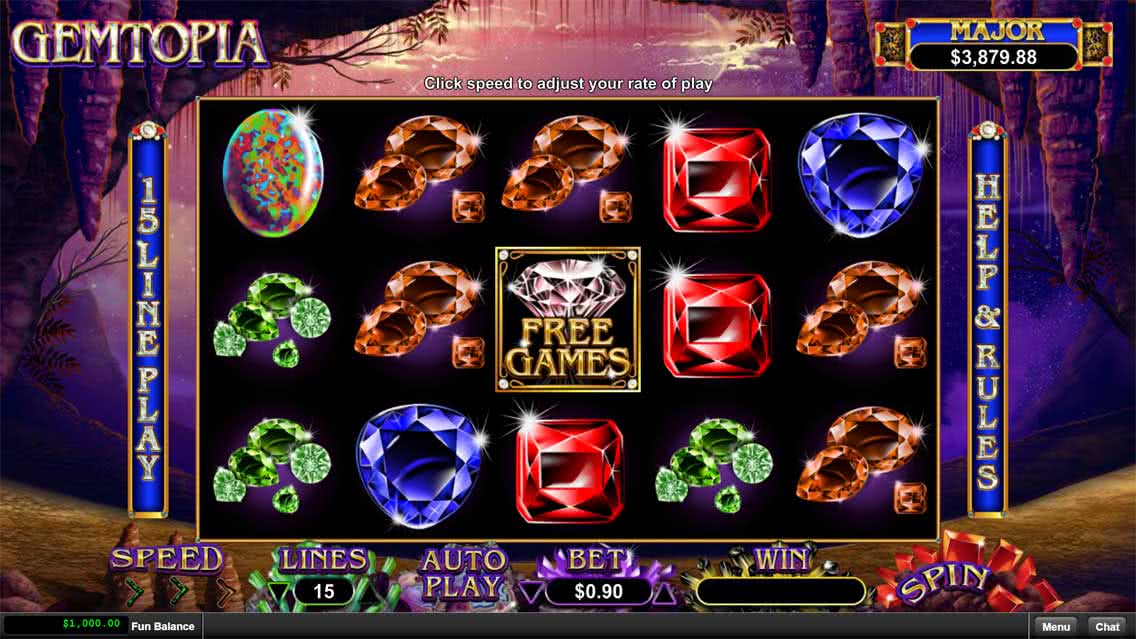 You’ll find that there are two different diamond symbols in the Gemtopia video slot. The first is the wild symbol, and it actually has the word “wild” listed on it, so you don’t have to worry about getting it mixed up with the other diamond (the scatter). This wild shows up on the second, third and fourth reels only, but it will count for all of the regular-paying symbols (no scatters).

This wild doesn’t get its own payouts because it’s not located on all reels. However, that is made up for by the fact that it’s an expanding wild that will always cover the entire vertical reel it appears on. This makes multi-line combinations much more likely and gives you a tremendous amount of value, especially if they show up on more than one reel at a time.

The second diamond, which has a bit of a red or pink tint to it, is the free spins scatter symbol. You can have up to three of them on the reels at once, and getting all three together will give you a 2x win multiplied by your total bet size in addition to giving you a shot at a free spins bonus feature.

The way this works it that you get 15 free spins to start with. You’ll get instant wins and three extra free spins when you get three of the yellow gem bonus symbol on the reels at the same time during the free turns (which is the only time this symbol appears). You’ll win instant payouts of up to 1,000 times your overall bet with these yellow bonus gems, so the free spins gives you a tremendous chance at huge payouts in the Gemtopia online slot. 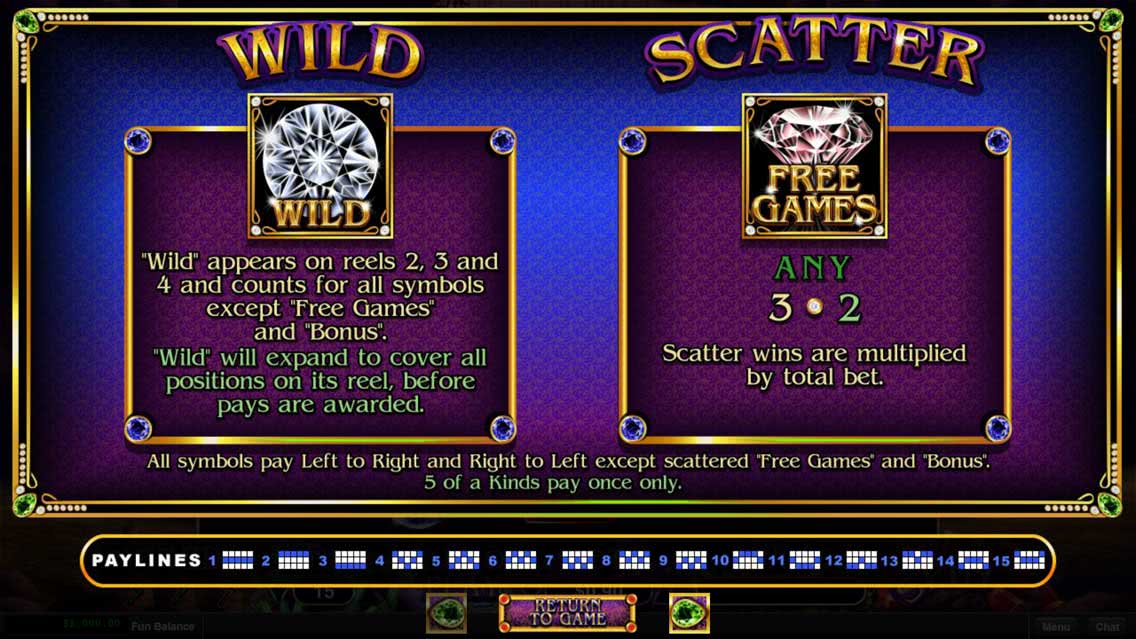 To give you yet another way to get some extra value, you can get a free re-spin as well. If you get at least one wild on the screen, then your pays will be given normally. After that, however, the wild reel (since the wild always expands) is held while all of the other reels spin. This gives you a free chance to win extra payouts. However, if you get more wilds, they are all held while you get additional re-spin opportunities. This is a cool way to give an extra chance to win that’s worth more than a usual free spins because you’re guaranteed a reel full of wild symbols. 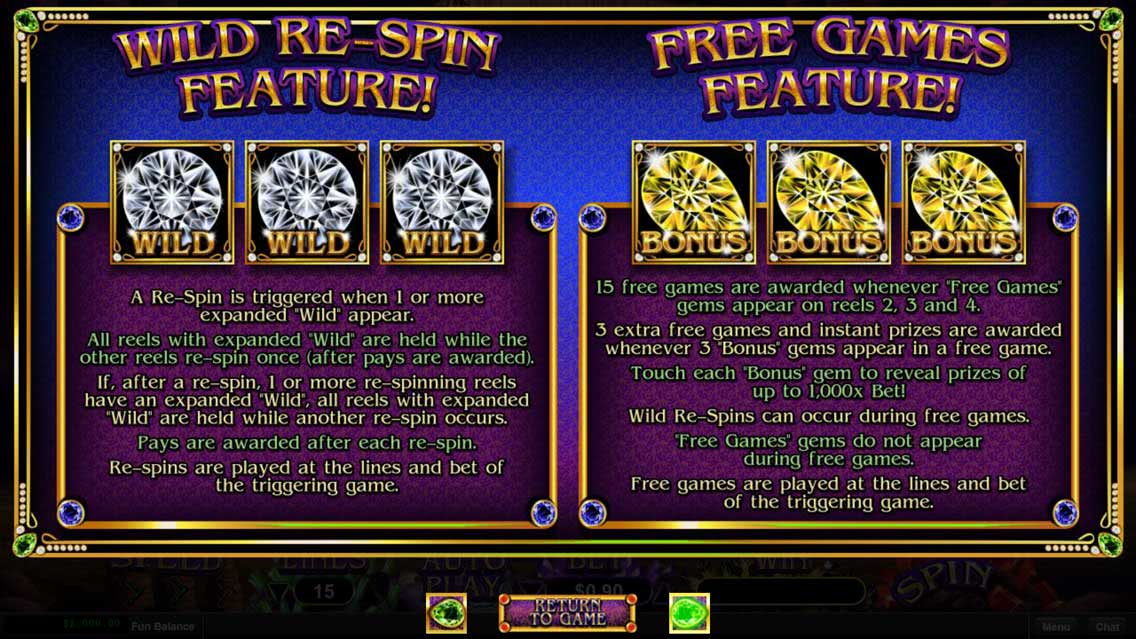 In the Gemtopia video slot, players have two ways to win progressive jackpots with both a major and minor prize available. The major prize always starts out at $1,000, and it increases in size as players enjoy this game until it’s eventually won and resets back at $1,000. The minor jackpot works much the same way, but the prize starts at $250 instead.

Something really great about these progressives is that you can win them no matter how much you’re playing for. If you’re playing for real money, then you can win on any given spin. They’re also awarded at random, so you don’t need any certain set of symbols or winning combination to get them. 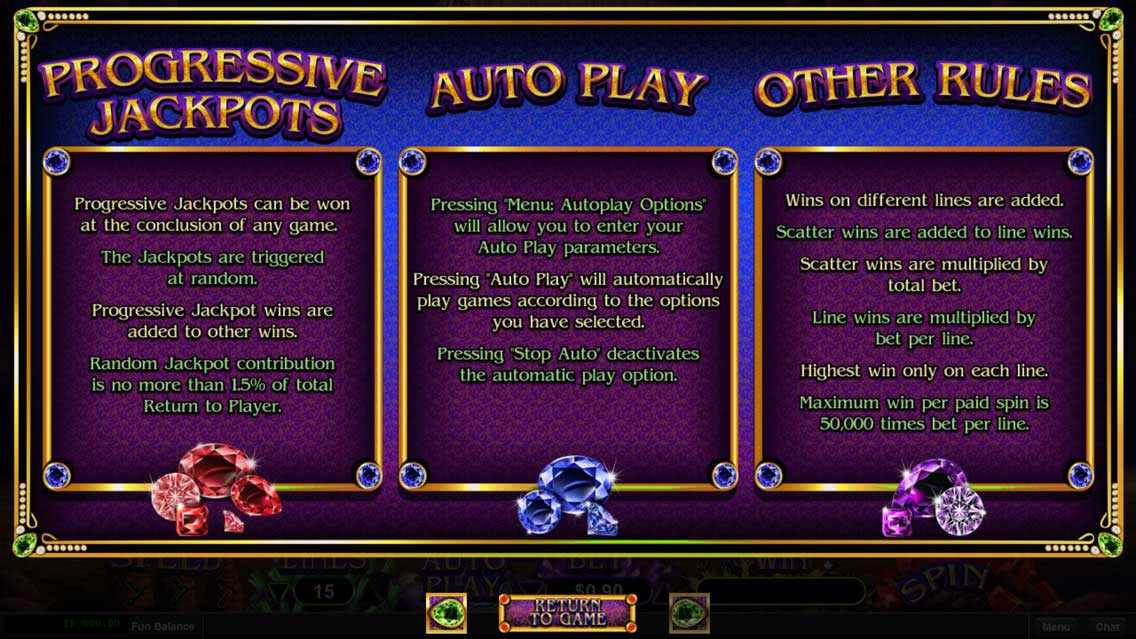 One aspect of this game that helps to keep the volatility down, considering the progressives and value-packed features, is that there’s a balanced pay table that consists of just seven regular symbols. The first is the multi-colored egg gem symbol, and it pays 500x for five on an activated payline. You can earn 200x for five of the square ruby as well. Five of a kind of the green emerald gem earns you 100x, and you can have 60x for five of the blue one as well. The brown topaz gets you 50x for five, and the yellow and green stacks of gems will earn 40x for five of either of them on a payline.

The pay table is pretty balanced and doesn’t get too top-heavy. However, the expanding wilds, free spins and re-spin feature all pack a lot of value into a narrow set of features, so you end up with a medium-level volatility. The hit-rate is still pretty good, and it’s actually much closer to what you’d see from a low-volatility game, and we feel like that’s worth pointing out because that’s one of the major things that players use to determine if they’re interested in a particular game or not. 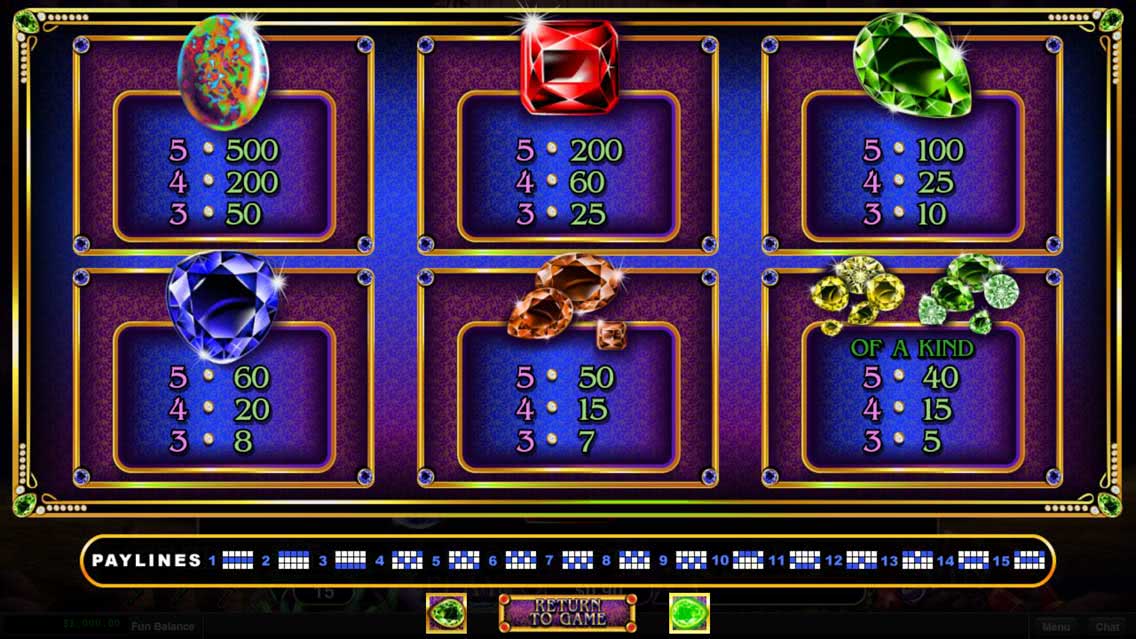 To really understand how Realtime Gaming’s Gemtopia online slot fits into things, you have to consider it as a part of their overall portfolio. It provides players who like jewel-themed games with an experience that’s in line with what they typically like, and it makes it easy to really enjoy the game no matter what level of bankroll you have or what level of stakes make you comfortable. With bet sizes as low as $0.15 with all paylines activated, and with progressives that you can qualify for at that price per spin, it’s clear that you’ll have no problem getting a ton of action when you play this game, even if you play at the lowest stakes available.