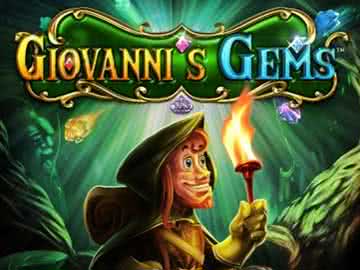 The Giovanni’s Gems slot by BetSoft gives players a 49-symbol layout with a gem-matching theme. You’ll have a free spins bonus round to contend with along with exploding wins that give you chances to win over and over on the same spin.

There are a number of games out there in the online slots industry that are based around matching up gems. The Giovanni’s Gems video slot by BetSoft is within that sub-genre, and it brings a number of things to the table that makes it stand out from other titles with the same type of motif. The graphics are the best we have ever seen from this style of game, and the action is fast with a strong hit-rate. While this game does have a medium volatility, the hit-rate is still pretty high, and it’s mostly due to the large payouts that are available at the top end of the pay schedule.

Format and Layout of the Giovanni’s Gems Slot

The game board for this title is obviously much larger than that for the vast majority of online slots out there. This is because there are seven rows and seven columns of symbols, and this game does not use the traditional reel and payline structure. Instead, you’ll make winning combinations primarily through the use of clusters, which are defined as sets of matching symbols that are

connected vertically or horizontally. This means that you can get some pretty big wins depending on which symbols are connected, and that drives the action of the slot. 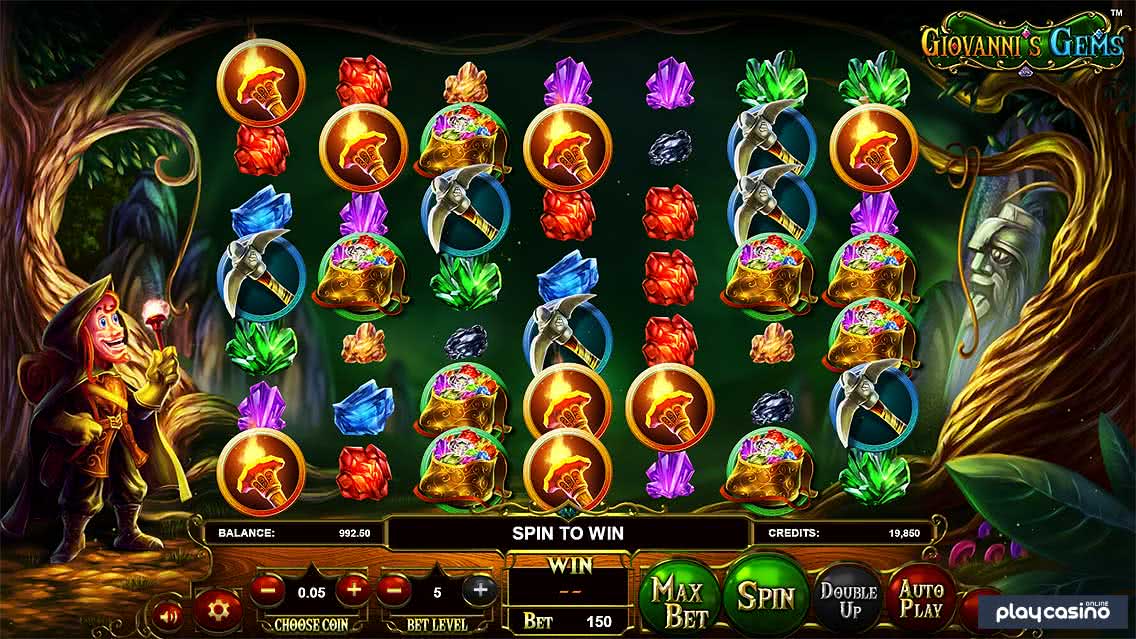 The base wager for this game is 30 coins. However, you can multiply that up to a factor of five for 30, 60, 90, 120 or 150 coins in a wager. You’ll also have a number of different choices for how much those individual coins will be worth, and that can go anywhere from $0.01 at the minimum to $1 at the maximum. The overall betting range is $0.30 per spin at the low end compared with $150 at the high end. 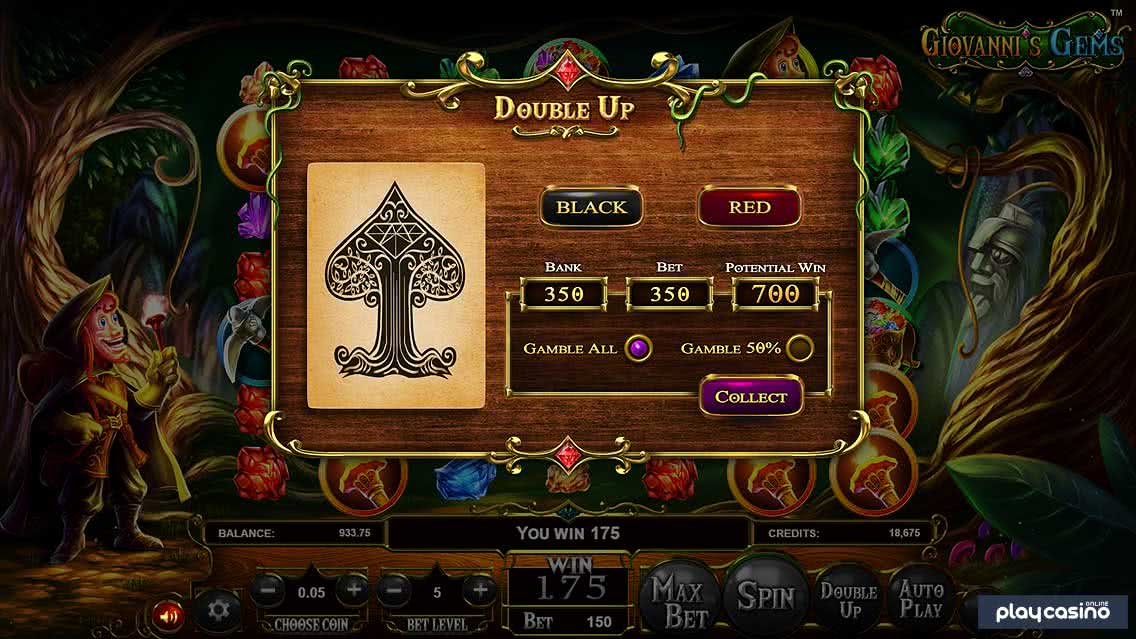 When you get a win in this game, it’s paid out to you as usual. However, all of the winning symbols will then explode to allow existing symbols to fall down into place. On top of that, new symbols will fall into place as well to fill up all of the gaps left behind. This is the Exploding Wins feature, and it gives you an opportunity to get new cluster wins after these gaps have been filled up. If you get more wins, the process continues until there are no new cluster wins available. At this point, the scatter wins will be accumulated and totaled.

This approach to the scatter pays allows you to get better scatter wins than you would have picked up otherwise since you will accumulate scatter symbols on the screen throughout each of those avalanche falls. 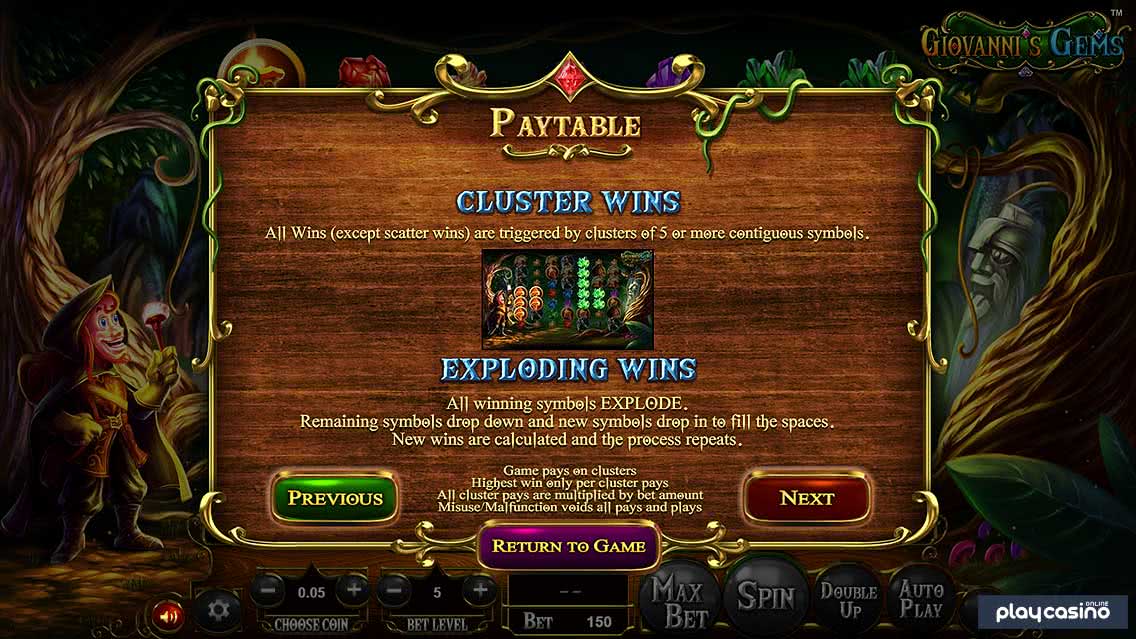 The coal symbol is the lowest-paying symbol in this game on the regular pay table. However, they can actually turn into diamonds, which give you extra wins. They’ll turn into diiamonds if you get a win adjacent to any coal symbol; those coal symbols turn into the diamond symbol as a result. During the regular gameplay, only coal will appear on the reels (no diamonds). However, in the Giovanni’s Gems online slot’s free spins mode, you can get diamonds that appear on the reels normally as well.

A total of 25 or more of the diamond symbol in a cluster is worth 3,000x, but that’s hard to get with the way they appear. However, something really important about this symbol is that you only need a cluster of one to get a payout of 12x. Two is worth 25x, and three gets you 50x. It’s clear that the low-end pays for diamonds are pretty substantial, and getting paid for just one means that you get paid any time they show up on the reels at all. 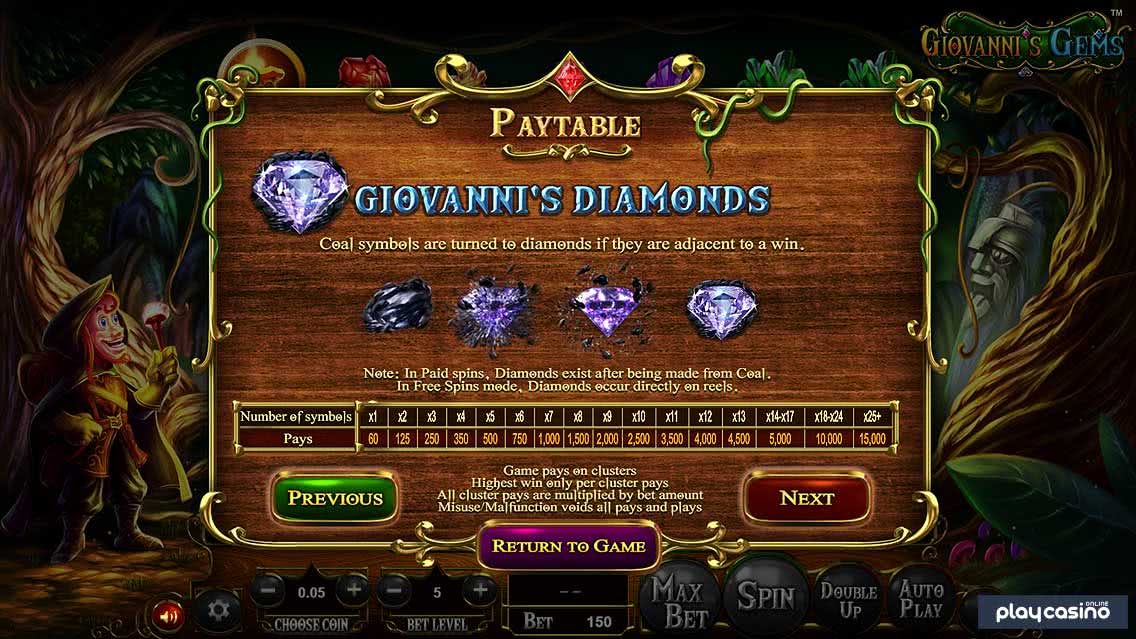 Giovanni himself is the scatter symbol in the Giovanni’s Gems video slot. Three or more of this guy anywhere on the game board will get you a payout worth up to 300x for 25 or more. However, the real value for this symbol is in that it triggers a set of free spins when you have at least five visible at once. You can earn a minimum of seven free spins for five and as many as 50 free spins for 25 or more of this Giovanni scatter symbol. They don’t show up during the free spins themselves, and that makes it easier to hit winning clusters, but it also means that you cannot re-trigger this bonus feature. 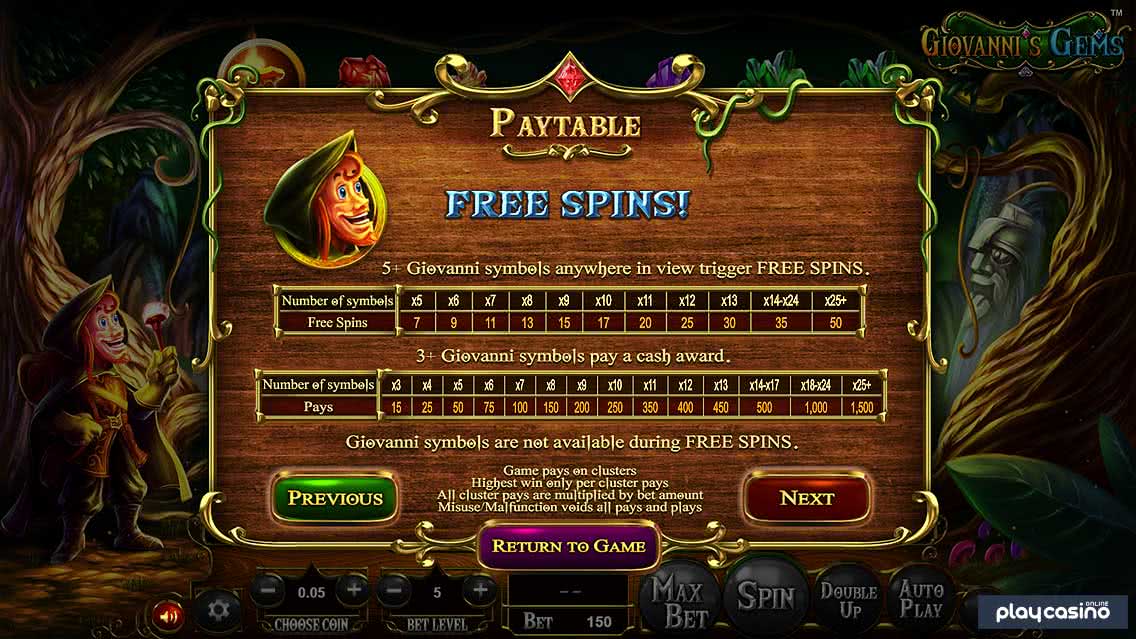 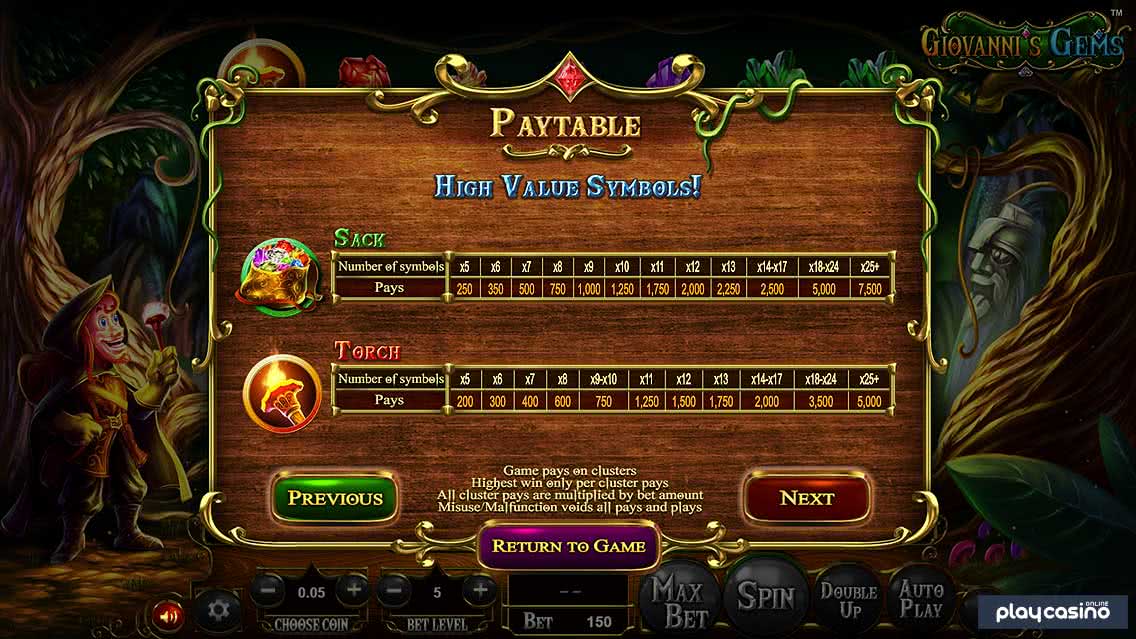 The pickaxe has a blue motif to it, and you can earn 30x for five or up to 750x for 25 and up of this symbol. The green motif is for the emerald gem, and it pays out between 25x for five and 600x for 25 or more in a cluster. The ruby has the glowing red motif. This gem pays 20x for clusters of five, but you can win as much as 500x for a cluster worth 25 and up. 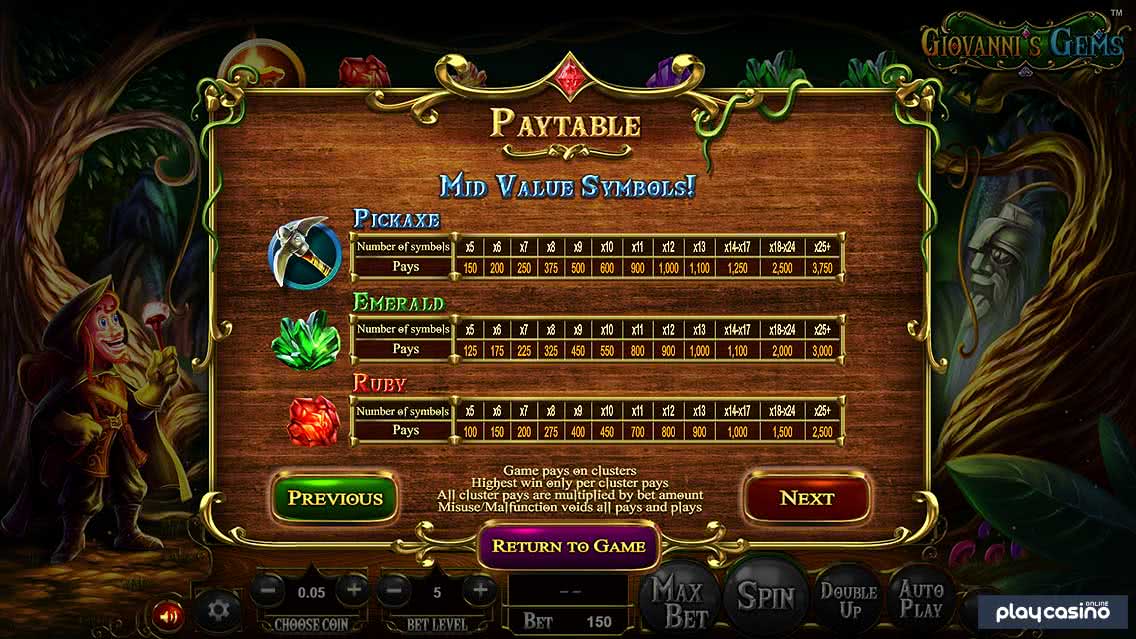 For the bottom end of the pay table, you start with the blue sapphire gem. It gets you 8x for five, and the wins are worth up to 250x for 25 or more. A minimum of 25 of the purple amethyst gem is worth 200x, and you can earn 5x for five. Five of the orange citrine can get you 4x as well, and the 25+ cluster prize is 150x. The lowest-paying symbol in the game is the black coal with 3x for five or 100x for 25+. However, it also turns into diamonds with the feature we described up above, so it’s worth a lot more than you’d initially think. 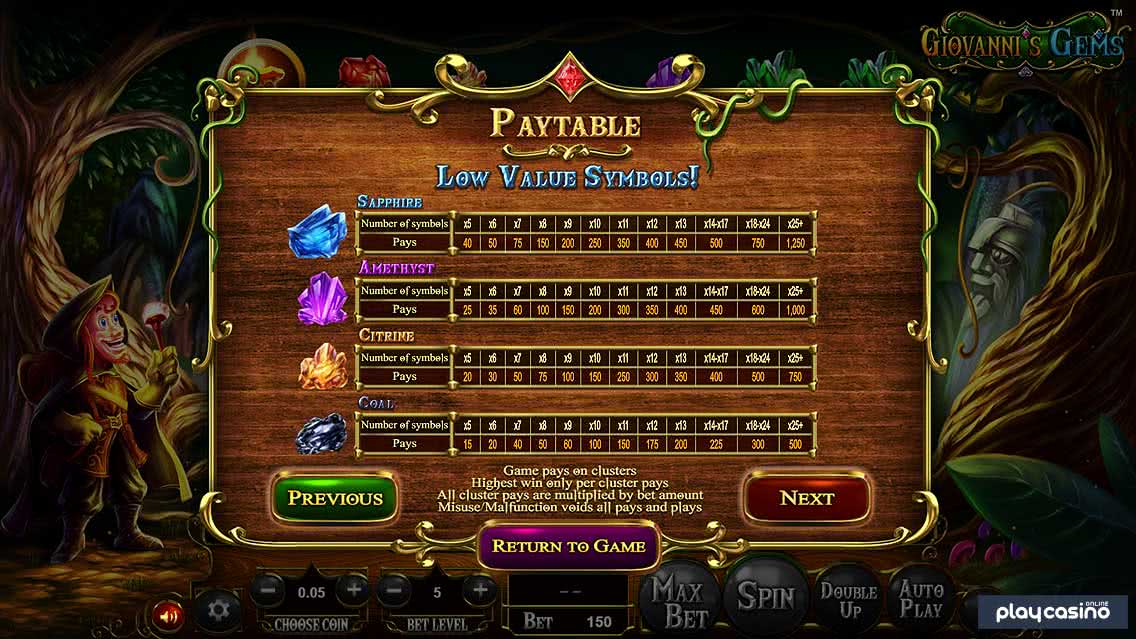 In the sub-genre of gem-matching slots, the Giovanni’s Gems online slot is definitely the best, or close to the best, that the whole industry has available. It’s strong in every area with base gameplay, features, graphics and win-rate. There are no weaknesses in this game whatsoever, and it represents several years of work, knowledge and experience by BetSoft to be able to put together a game that is so overwhelmingly good. Even if you don’t usually like games with this style of gameplay, we suggest that you check it out anyway because it breaks down a lot of the barriers that often keeps players from enjoying this type of play.