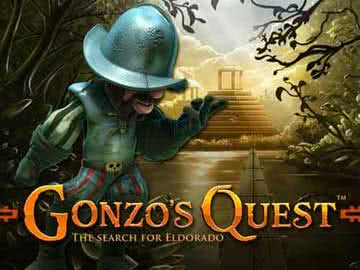 Gonzo’s Quest is one of the most popular slots ever produced by Net Entertainment with 20 paylines and avalanche symbols with multipliers.

Gonzo is the conquistador standing around on the left-hand side of the reels, and the Gonzo’s Quest slot is all about the 15 symbols on the grid that can give you some very serious wins. The volatility of this game is in the medium-high range because of the large about of value tied up in the top wins and bonus features, but it’s also set up in a way to give you a relatively high hit-rate. Combine this with awesome graphics set in front of a fun jungle background, and you get a strong combination of both graphics and gameplay.

Format of the Gonzo’s Quest Slot

The format used for this game is relatively tame since it uses five reels, three rows and 20 paylines. That might actually be the most popular video slot layout ever used in the industry. However, don’t let looks deceive you because there’s a lot more going on with how the gameplay works.

In terms of betting, the 20 paylines are static, so you’ll always be betting multiples of 20 coins. You can go with coins that range from $0.01 to $0.50 each, and with the ability to bet between one and five coins per payline, your total betting range starts off at the $0.20 level and goes all the way up to $50 per turn.

We say per turn instead of per spin because this game doesn’t have spinning reels like what is typical of video slots. Instead, the stone block symbols all fall into place from the sky at once, and that’s actually a key component of the gameplay and features.

Whenever you get winning combinations in the Gonzo’s Quest video slot, you will be paid your winnings as usual. From there, you’ll see the winning symbols explode to allow new symbols to fall into place. This gives you a chance to pick up extra wins, and the process can continue indefinitely if you get new wins after the extra symbols fall.

However, there’s more to it than this. You’ll see a multiplier indicator in the top-right corner, above the reels. Your initial spin has a multiplier of 1x, but after each extra set of symbols falls due to a win, the multiplier increases as high as 5x during regular play.

You’ll get free spins if you can pick up three of the golden mask symbols. They have to line up on the first three reels, though they don’t have to fall on any particular payline. You’ll always get 10 free turns, and there is a 3x multiplier applied during the entire feature. This puts you in a position where you can get total multipliers as high as 15x since they multiply with the multipliers from the avalanche feature as well.

There is a symbol that’s a black and white mask symbol with a golden circle and golden question mark in front of it. That is the wild symbol. It shows up on each of the five reels. However, unlike many other slots, the wild in the Gonzo’s Quest slot will not give you its own set of payouts. That’s alright since the given payouts are big enough to be great on their own, but it’s just something to be aware of.

There are three symbols that you really need to pay the most attention to. You’ll want to spend some time looking at the Gonzo’s Quest video slot pay table to learn which symbols these are because there is no immediate logic to how they’re ranked, and it can be hard to tell some of them apart at first.

The first main symbol you’ll want to pay attention to is a blue/gray block with a face that’s looking directly towards you and that has golden eyes and bars over the cheeks. This is the top-paying symbol, and five of a kind fo this guy earns you a nice 2,500x payout. This can actually be as high as 37,500x with the potential 15x combination multiplier.

The second is the only green block in the game, and it pays 1,000x for five. Likewise, this can be worth as much as 15,000x. What follows that is a golden mask that’s looking straight at you, and five of a kind of that symbol has a base payout of 500x. Taking the time to learn these three symbols and their respective payouts will make your experience playing the Gonzo’s Quest slot a lot more enjoyable.

The Gonzo’s Quest video slot is a great example of Net Entertainment building a game that has fast-paced gameplay along with top-tier graphics. The features of this particular game combine to give you chances for some incredibly large payouts as high as 37,500x, and that’s beside the fact that you can hit plenty of multi-line wins on the same spin thanks to the avalanche feature. If you like a lot of action and don’t mind the high volatility, then this is a game you’ll come back to over and over again.