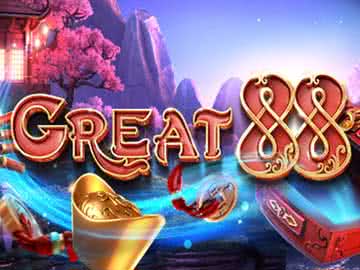 The Great 88 slot by BetSoft is based on a Chinese celebration theme with fireworks, decorative dragons and 3D graphics. Gameplay is dominated by a number of different bonus features as well, including free spins bonus rounds.

BetSoft is a company that’s really known for knocking it out of the park on the graphics side of things, and the Great 88 online slot is no exception. They have really put together some tremendous graphics in this Chinese celebration-themed slot, and it includes beautiful dragons along with different types of lucky boxes, fireworks and other symbols. As if the visual appeal wasn’t enough, this title also has plenty of features and a very strong top jackpot, which combine to give this game excellent gameplay.

As a whole, it stands out in a tremendous way when compared to other Asian-themed slots, and it’s the type of game that could be seen as the standard to which other titles in the sub-genre should be compared.

Format and Layout for the Great 88 Slot

With five reels, three rows and 30 paylines, the layout for this game is well within the realm of what’s normal. There are many video slots that have fewer lines than this, and there are several that have more, so it’s really at a happy medium overall in terms of the number of ways you have to win on each spin along with how much you’ll be betting. This means you don’t have so many ways to get paid that you can’t keep up with them all, which can be frustrating for some players. 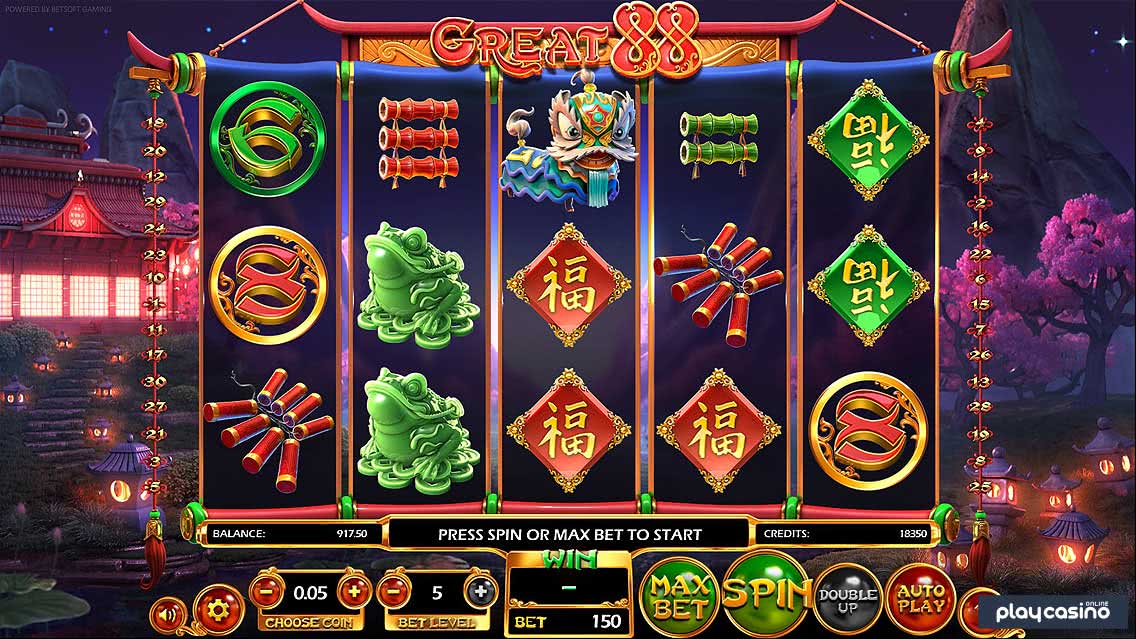 Betting centers around 30 coins per spin since you can’t change the number of paylines in this game (not that you’d want to). Between one and five coins can be wagered on each spin, and individual coins can go from $0.01 to $0.50 apiece. This gives players bet sizes that start down at $0.30 on the low end and that go up to $15 per turn on the upper end. While this is definitely a wide enough betting range for almost all players, super high rollers may find that they don’t have large enough bet sizes available, but that will only affect a particularly small minority of players. 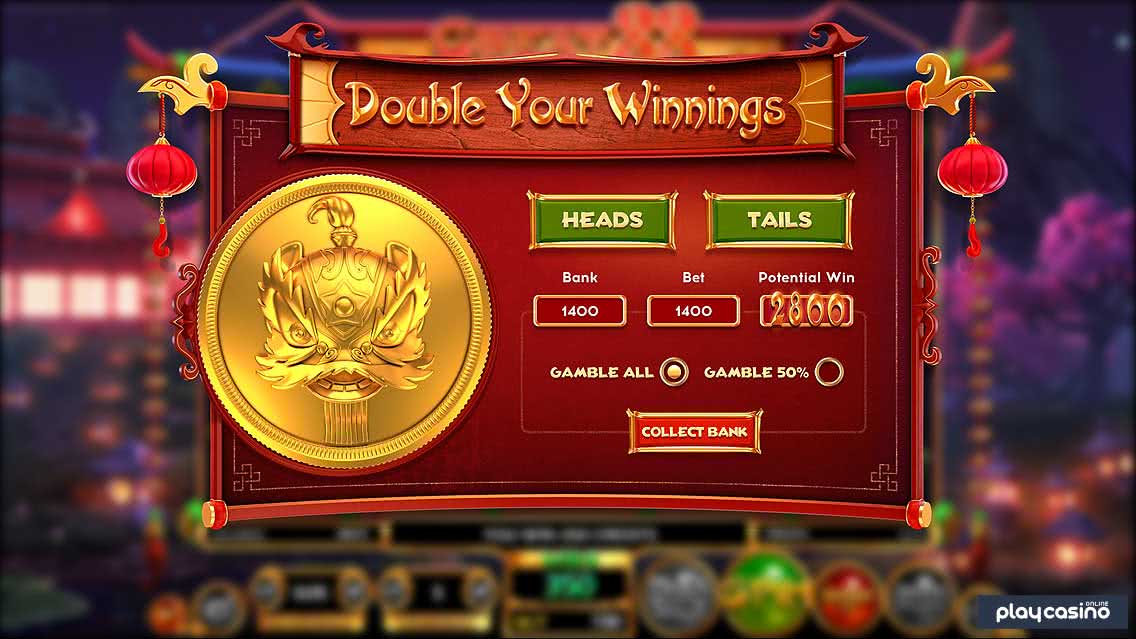 The red box with gold trim is the lucky box in the Great 88 online slot. It’s the key to most of the features when you line up three or more on the reels at once. These features are chosen at random, and one of them is that you can have them replaced by one of the two top symbols in the game, each of which are dragons and lions. This gives you more opportunities to hit some of the bigger payouts in the whole game. 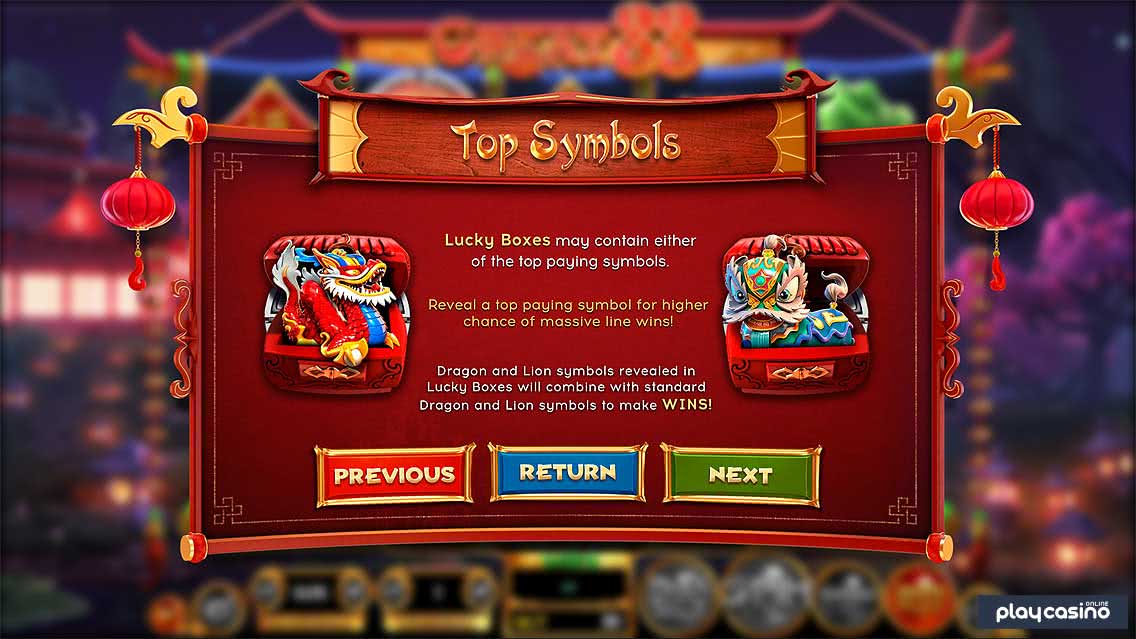 If your lucky boxes have bronze coins in them, then you’re in a lot of luck because you’ll get multipliers on any wins that happened on that particular spin. The way this works is that up to three bronze coins can be found in each of the three lucky boxes, and you get 1x added to your multiplier for that spin for each bronze coin. This means your total multiplier will range from 3x to 15x since you’ll have a minimum of one coin in three boxes and a maximum of three coins in five boxes. 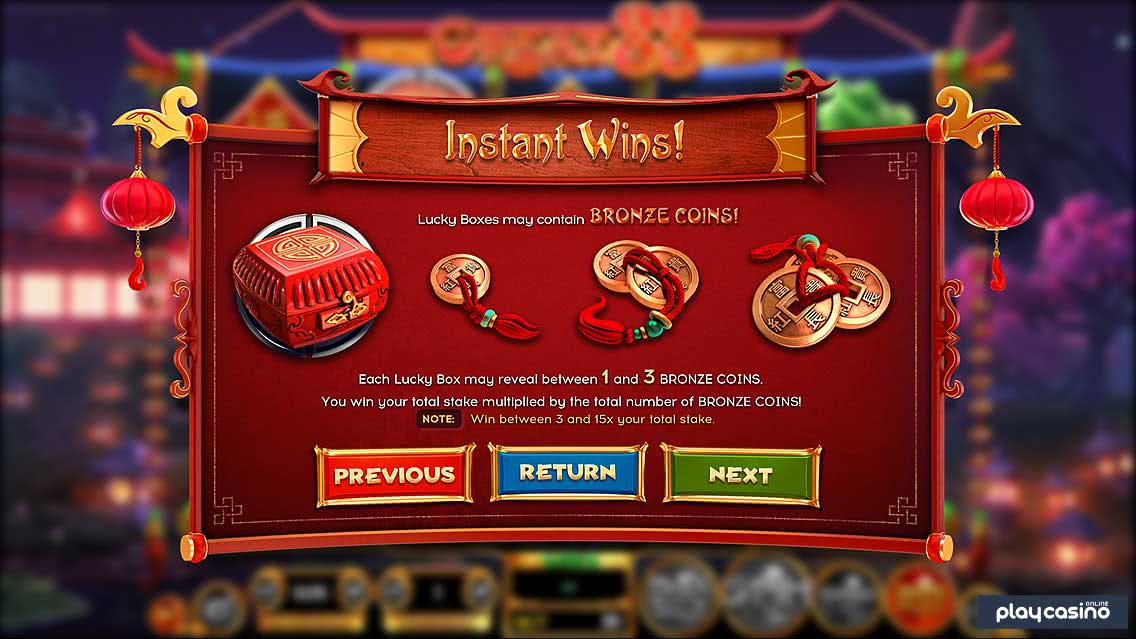 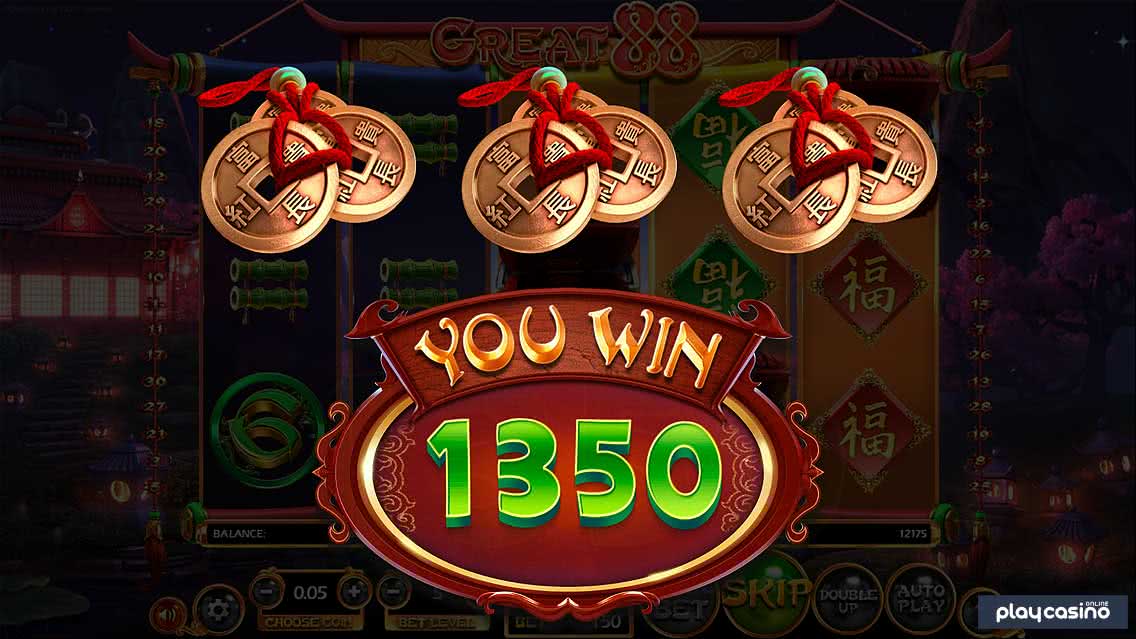 If the lucky boxes have firecrackers in them, then you’ll activate the Great 88 video slot’s Firecrackers Wilds feature. Each set of firecrackers will turn wild and also turn one or two adjacent symbols into wilds. This means several wilds are added to the reels, and it’s not difficult to imagine how much value that can give you on a single spin.

Jade coins can appear in the lucky boxes, and if you get them, then it’s time for some free spins. Between one and five jade coins can show up in each box, and you’ll get one free spin for each of them. That translates to between three and 25 free spins at a time, but we need to point out that lucky boxes do not appear during those free spins, so you cannot re-trigger this feature. 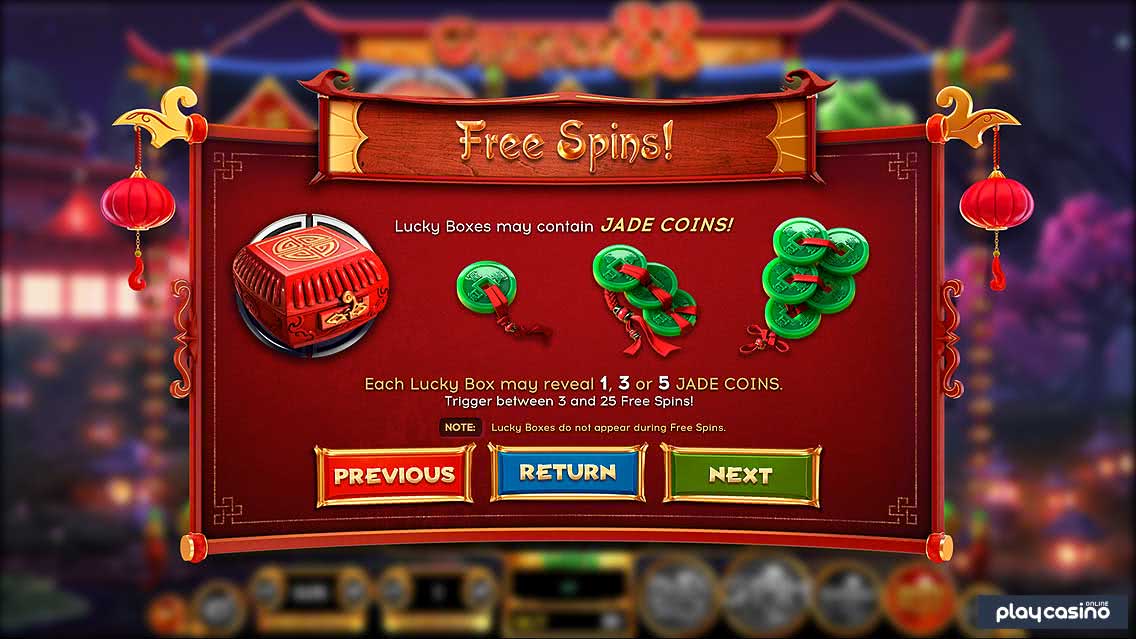 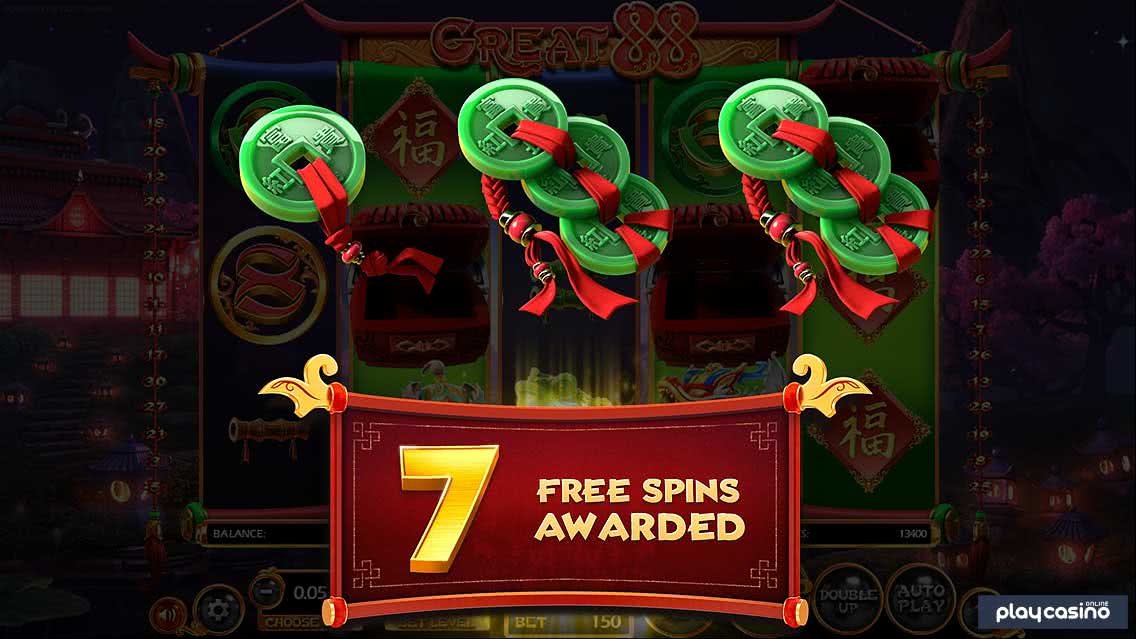 Finally, you can pick up spins on a bonus wheel if the gold dumplings show up in the lucky boxes. Each spin can give you one of the following: eight free spins, a 5x win, a 10x win or a 20x win. These wins are multiplied by your total bet size. You can also get a spin on the mega win wheel, which gives you a chance at a 100x payout, a 750x payout and a massive 6,000x prize payout, which is absolutely enormous. 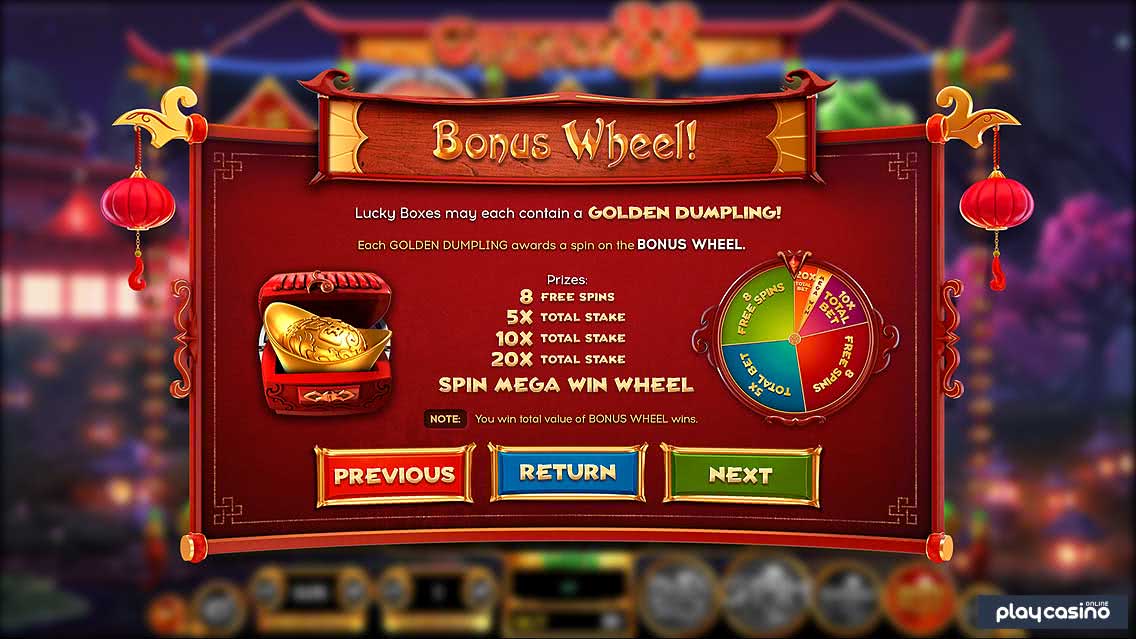 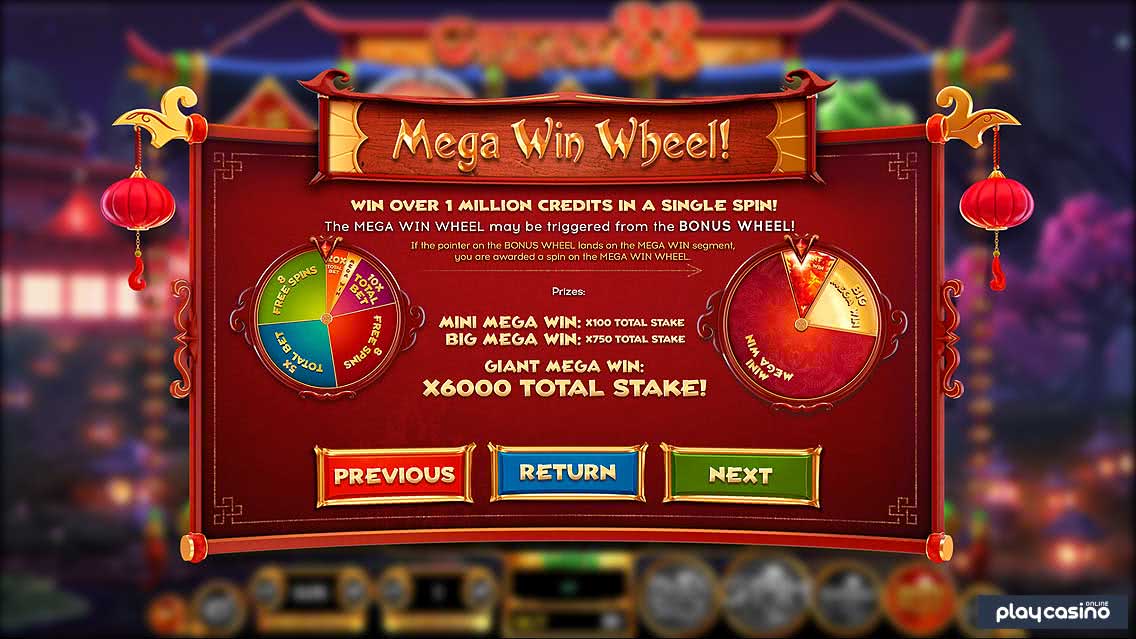 Just like the firecrackers symbol that you can find in the lucky boxes, the firecrackers on the regular reels are wild symbols. Five of a kind will give you a 8,888x payout, the largest available jackpot in the game other than the 6,000x win multiplied by your whole bet on the mega win wheel bonus feature. You can also earn 888x for four of a kind or 88x for three of a kind of this symbol. It will substitute for any regular symbol in the game, but that does not include the lucky box bonus symbols. 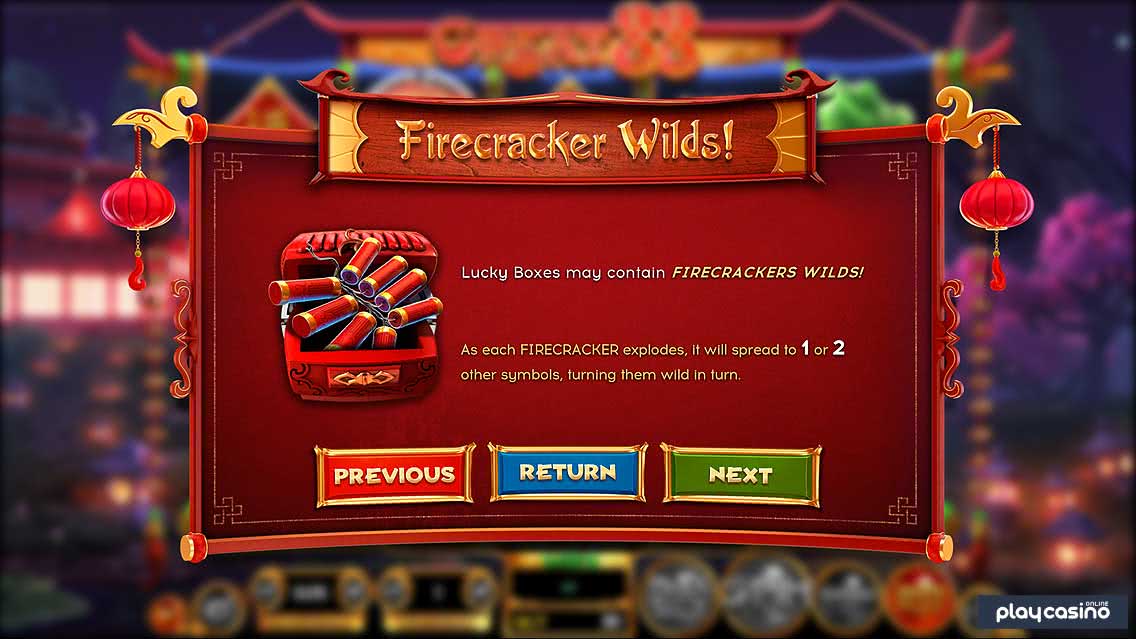 Five of the dragon symbol is worth 1,000x in this game, but don’t confuse it with the lion symbol, which pays out 600x for five of a kind. You can tell the difference in the Great 88 online slot because the dragon is red with a blue belly, and the lion itself is just mostly blue. The green frog pays 500x when you line up five on a payline, and five of a kind of the red sash symbol is worth a 300x win. 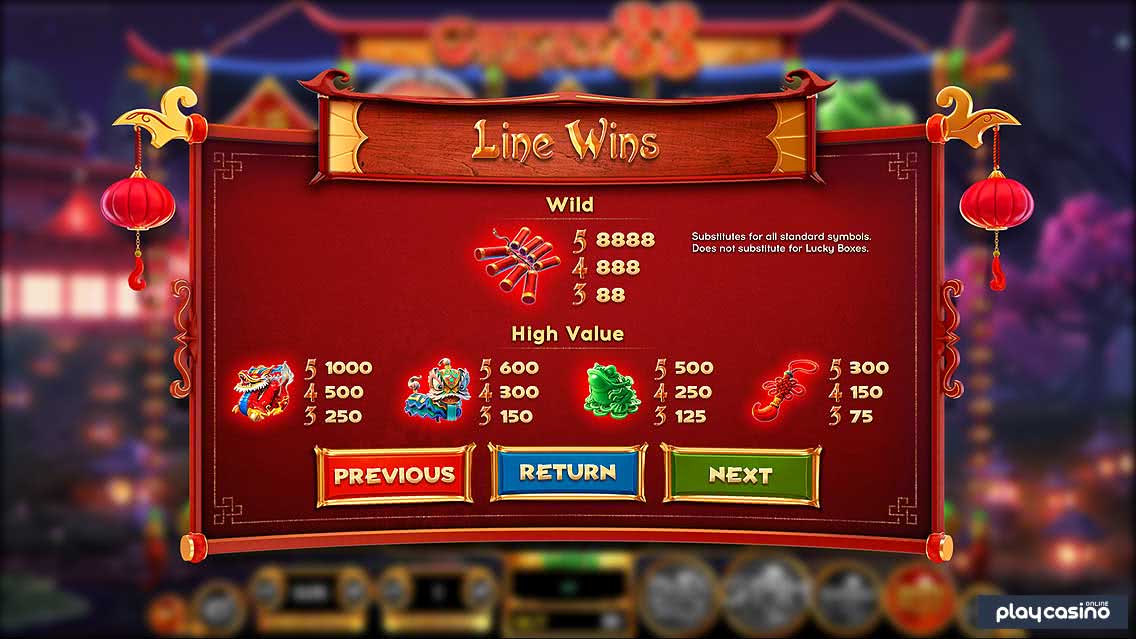 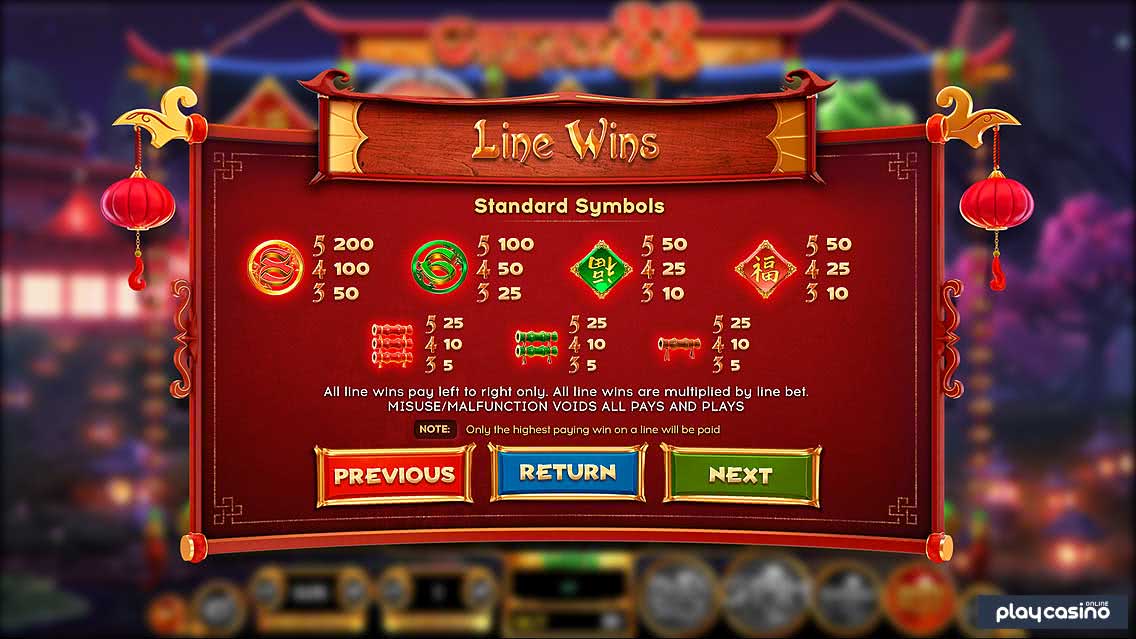 With the Great 88 video slot, you get a lot of action from BetSoft in the form of a variety of different features. The celebration-based theme is definitely fitting here because you’ll be celebrating with a different type of bonus round each time you get three of the lucky boxes on the screen. You’ll also have more ways to win from the pay table than you may be used to, so there’s value in a major way on both ends of the gameplay here.