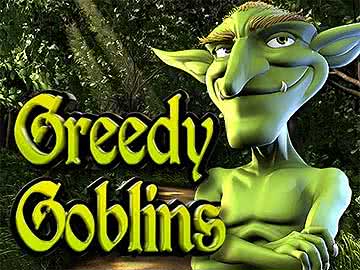 The Greedy Goblins online slot by BetSoft uses 30 paylines of magical forest action to bring you chances for some tremendous jackpots, including a progressive. There are also several other features with free spins, re-spins, multipliers and wild reels.

Whenever players see a big jackpot is available in a game, all of their attention usually turns to it. That’s fair because every player’s dream is to take down a big score, but BetSoft set up the Greedy Goblins video slot in a way that you’ll have plenty of other things to look forward to. It’s absolutely jam-packed with bonus features and ways to win pretty substantial prizes. Along these lines, it has a lower hit-rate and a high volatility, so you may want to drop down to a lower bet size than what you’re used to in order to make weathering the swings a bit easier.

Format and Layout of the Greedy Goblins Slot

The base format for this game has 30 paylines spread across five reels and three rows of action. It’s all set up so that you have plenty of ways to get paid on each turn, but there aren’t so many lines that it just gets out of hand. The volatility is fairly high in this game, so you may want to lower your bet size a bit, but just don’t drop the number of activated paylines to do it. This will drop your RTP percentage down, which hurts your ability to win on average over time. Instead, you’ll want to use the other betting options. 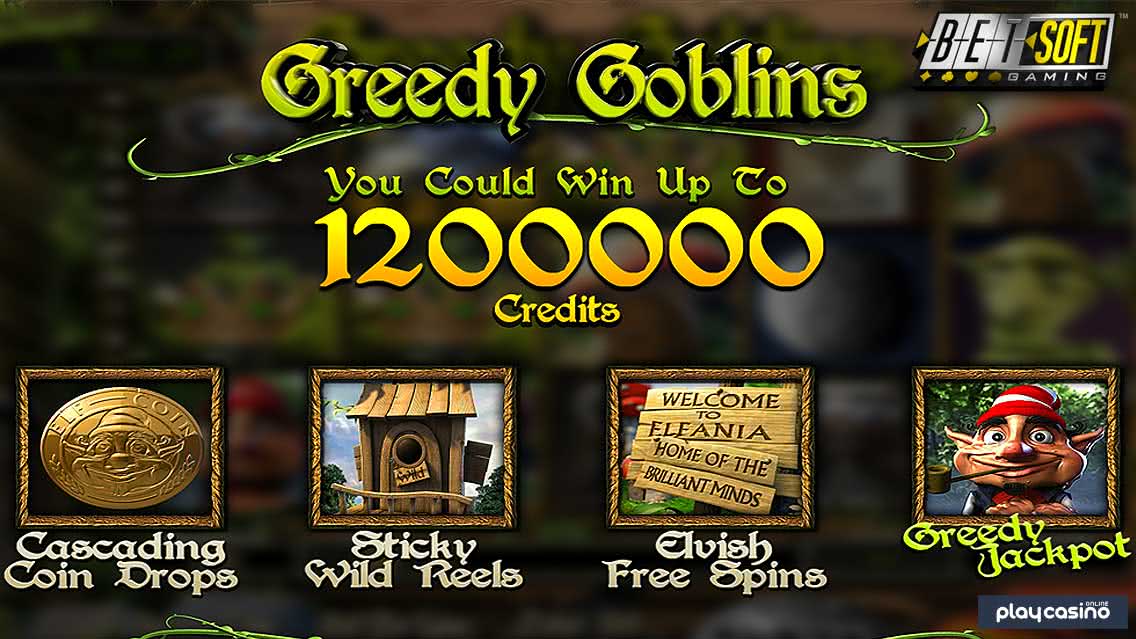 One of those options is to wager between one and five coins on each line. With all lines activated, that gives you a range of 30 to 150 coins per turn. If you want to activate the progressive jackpot, which we’ll go into more detail on down below, then you’ll need to bet the max of 150 coins. Those coins can range from $0.01 to $1 each, so you can play for as little as $0.30 and qualify for the progressive for $1.50. The maximum bet overall is $150 along these lines. 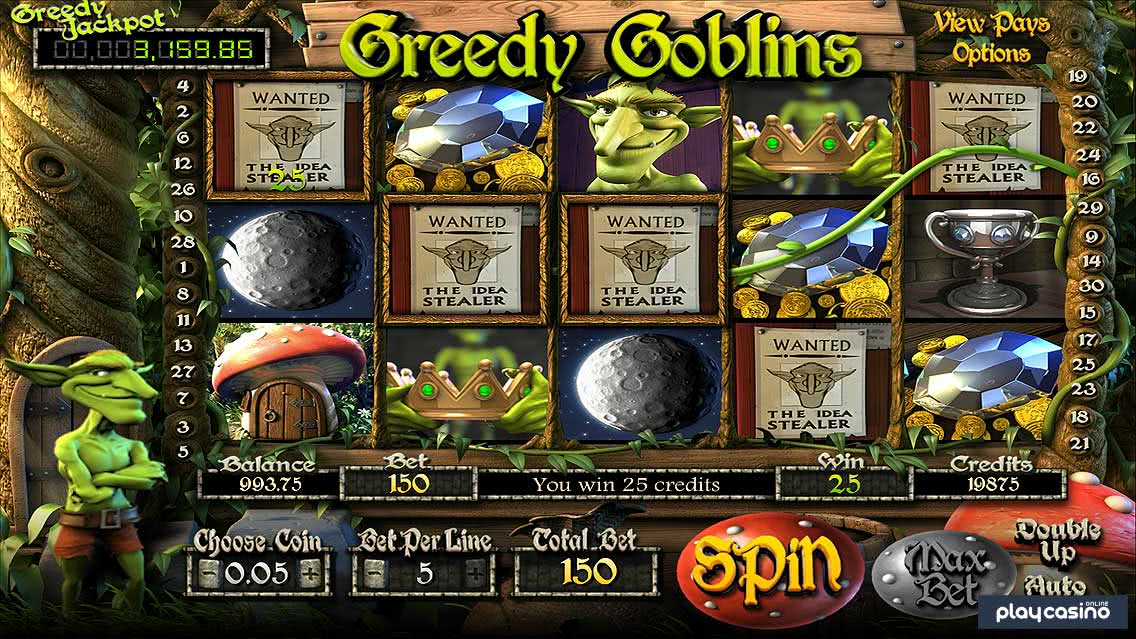 The golden coins are scatter symbols in the Greedy Goblins online slot. Two or more will give you a payout, which makes it a bit easier to get paid. Five of a kind gets you 750x, and you can earn 360x for four. Three or two anywhere on the reels will earn you 180x or 60x, respectively, as well.

However, whenever at least two appear on the reels, after all of the payouts are given, you’ll trigger the Coin Drop feature. Goblins will run onto the reels to pick up those coins, and that will allow new symbols to fall down into place. You’ll get more chances to win along these lines, and it’s a fun way of adding some extra value to a scatter symbol that we can’t remember having ever seen before.

Another fun feature of the Greedy Goblins video slot is the stickyw ild reels. When you get the shed symbol on the reels, up to three re-spins will be awarded. The reel that this symbol shows up on will turn into all wild symbols, and then you will see the other reels re-spin up to three times to give you additional chances at wins. Because of the wild reel, you’ll actually have better opportunities to win than on your normal spins, and that makes it a particularly exciting feature to get. 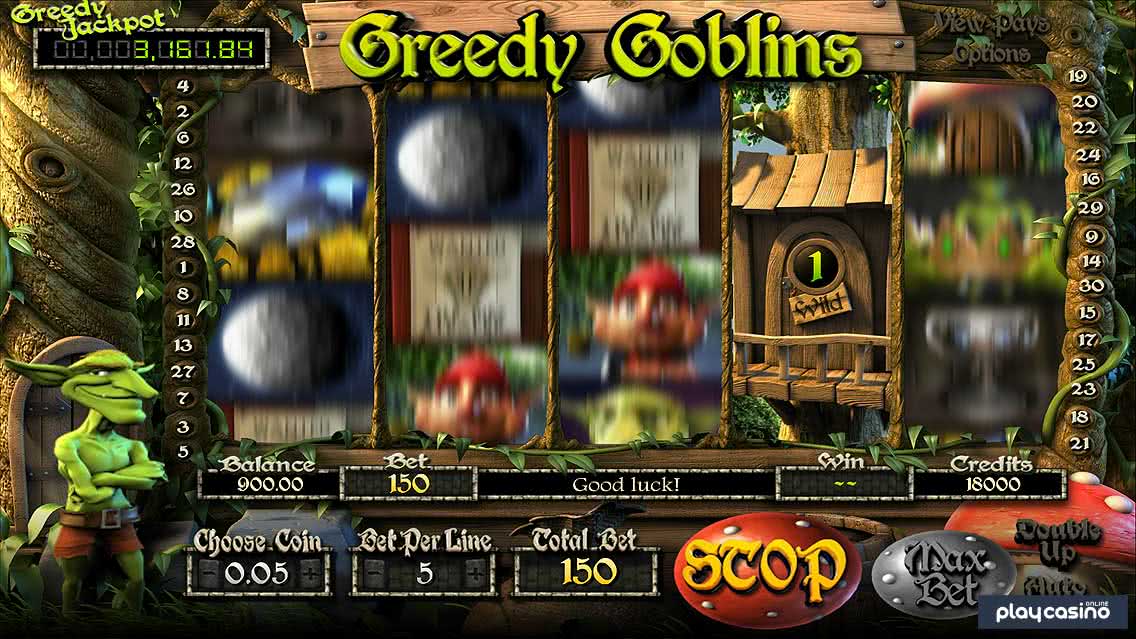 The welcome sign that reads “Welcome to Elfania” is another scatter symbol. Five of a kind pays 1,500x, and you can earn 300x for four of this symbol. Three of a kind is worth 60x. Keep in mind that these pays come regardless of where the symbols fall on the reels, and that means they’re easier to get than you might imagine.

They also give you free spins, and three, four or five of this symbol will give you 10, 15 or 25 free spins. This is on top of random multipliers worth up to 10x, though that does not apply to the progressive jackpot. It does apply to everything else, however. 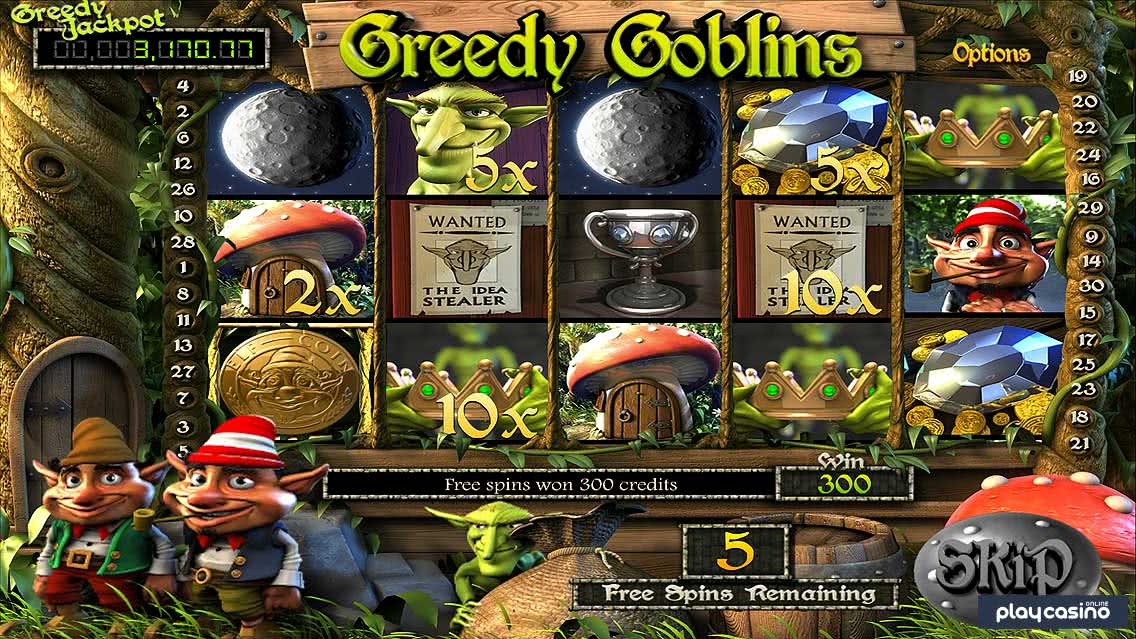 Book of Secrets Bonus Round

This game has a spellbook symbol that triggers the Book of Secrets bonus round whenever you get two on an activated payline. They show up on the second and fourth reels only. This is about goblins breaking in to try to take down some elf treasure, and you’ll pick out parts of the screen to attack in order to pick up instant wins. This is a fun feature that ties heavily into the theme of the game, so we like it a lot.

The elf symbol in the red hat is actually the top-paying symbol for the game. If you have five coins activated on all 30 paylines, then you’ll win the progressive if you get five of a kind of this symbol. However, if you don’t, then you’ll be given a static jackpot of 12,500x instead. Because of the big multipliers that can come from the free spins mode, this can be multiplied by up to 10x for a pretty substantial win. It also gives 240x for four of a kind and 30x for three of a kind.

Other Important Symbols and Prizes

The goblin symbol will earn you 1,200x when you line up five on a given payline. You can also earn a 240x prize for five of the mushroom house or five of the crown symbol. You’ll notice quite a drop in the prizes there, and that’s a factor in the high volatility of this game, so it’s something to keep in mind when selecting your bet size.

You can earn 150x for five of the silver chalice or for fie of a kind of the diamond and gold coins. From there, the moon and wanted poster symbol for “the idea stealer” will each earn 75x for five of either. 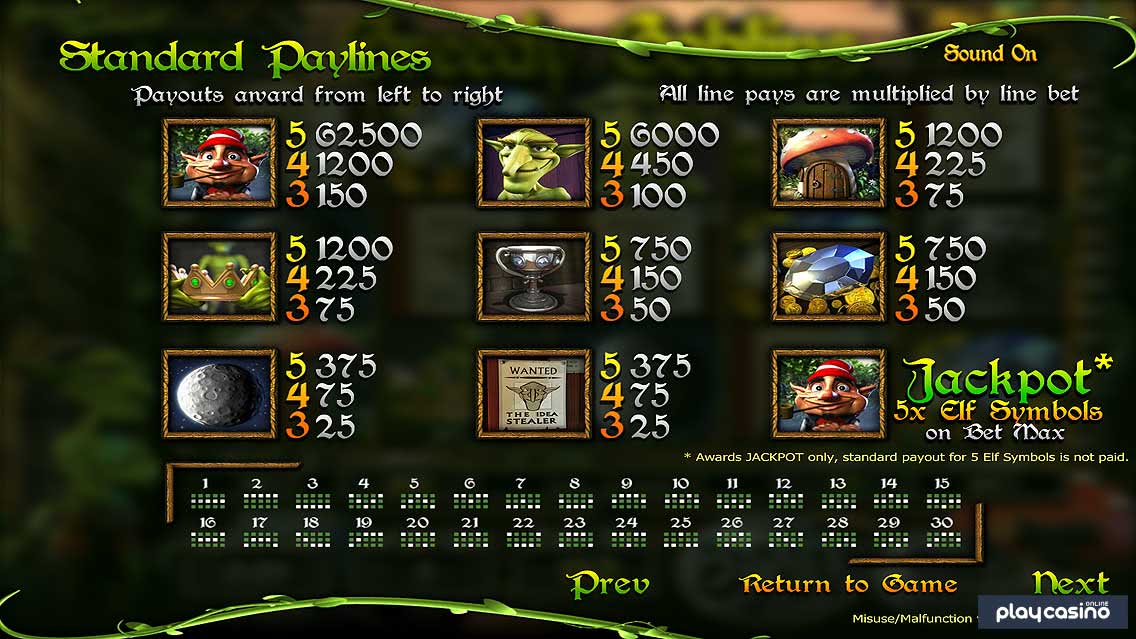 The fun nature of the theme of the Greedy Goblins online slot is offset in part by how serious a lot of the payouts can be, and that creates a great dynamic for having a strong overall experience. It’s one of the most popular titles by BetSoft that has a high volatility, and it’s the type of thing that most players will enjoy. However, some players don’t like games with very high levels of volatility, and that’s completely fine because this developer has plenty of titles in their portfolio with the volaitlity at a lower level. With that having been said, the support for this title is still strong, and it’s a popular title that has kept a fanbase ever since it was first released.