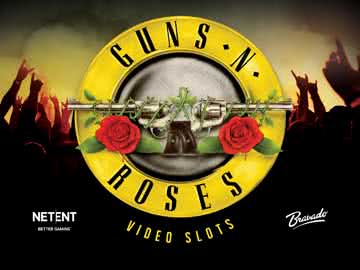 Guns N’ Roses by Net Entertainment was the first title in the NetEnt Rocks! series of games, and it is completely jam-packed with bonus features.

Guns N’ Roses is by far one of the most popular rock bands of all time, and Net Entertainment has captured them perfectly with an online slot by the same name. The graphics in this game have a very particular style to them that looks extremely good, and the soundtrack is based on a series of high-quality versions of the most popular Guns N’ Roses songs ever. The bottom line is that every single aspect of this game has been tied together through the theme of this band, and that approach has created an excellent overall experience for players.

As far as video slots go, this game has a pretty straightforward format. You’ll find five reels with three rows of symbols, and there are 20 paylines in this game. Net Entertainment tends to almost always go for standard types of game layouts like this because they want their graphics, presentation and gameplay to be what players focus on, and that’s definitely the case here.

In terms of available bet sizes, you can bet anywhere from one to ten coins on each of the paylines, so you’re betting between 20 and 200 coins since all of the paylines are always activated and cannot be turned off. Coin sizes run from the $0.01 level down to $1 apiece, so you have a minimum bet size of $0.20 per spin and a maximum of $200. It’s clear to see that this covers a tremendous range of bet sizes per spin that will appeal to everyone from the penny stakes players to the high rollers at the upper end of the bankroll scale.

The first feature that players need to know about in this game is the Solo Multiplier. The way this feature works is that you’ll randomly get a multiplier on a bet line win that ranges from 4x to 10x. The size of the multiplier itself will be noted in a small ribbon the wraps around the top-right corner of the affected symbols. This will only be activated for one symbol, so it’s possible to earn it for multiple paylines at the same time if they have wins that use the same non-wild symbols.

If you are familiar with video slots, then you’ll know that wild symbols often drive a lot of the play. this is very much the case in the Guns N’ Roses slot by NetEnt, but it’s to even a greater extent than you might imagine because there are three different types of wilds. The Guns N’ Roses symbol is a regular symbol that can appear on all five reels, but you can also get an expanding wild that will cover an entire vertical reel at random.

The other wild is the Appetite for Destruction wild symbol, and it covers five spots in a cross configuration. It will center on the middle reel and give you either four or five wilds in a T formation or a cross formation along those lines. Whenever you get this wild, it will stop any other features from happening because it offers such good chances to hit certain winning combinations.

The Bonus Symbol and Other Features

The record is the bonus symbol in this game, and you will find it on the first, third and fifth reels. When you get three of this symbol on the screen at the same time, you will activate one of three different bonus feature options. One of those is a simple instant win payout based on a multiple of your total wager. However, the other two offer up some pretty serious chances to win big, and we’re going to take a look at those two features in the following.

Whenever you trigger this feature, you’ll be taken to a second screen with a set of eight different musical instruments. You will get a number of picks of these instruments, and they will give you small prizes at random for each. After you make your picks, you’ll also have a chance to win free spins and to double your total win from this feature. It’s a pretty in-depth type of feature that fits into the rock band theme, and it’s something that stands out to us as showing NetEnt put a lot of effort into putting this game together.

Your final option from the bonus wheel is the Encore Free Spins feature. Whenever you get this feature, you’ll pick up 10 free turns with a band member appearing as an overlaid, stacked wild symbol on one of the middle three reels, and he will cover the entire reel when this happens. Then that band member’s symbol will also work as a wild symbol on the other reels at the same time. With so many wilds on the board, you’ll make four of a kind and five of a kind payouts much easier.

The final bonus feature we have to note here is the Legend Spins feature. This is randomly activated at the beginning of any spin in the regular game mode, and it starts off with a stacked wild on the first spin. You’ll get a second stacked wild for two re-spins, and then you’ll get one more re-spin with three stacked wilds. This is another variation on the wild-centric gameplay that you get from the rest of the bonus features and from normal play itself.

There is no denying that Guns N’ Roses is a tremendous game that is dense with features. The pay schedule has also been designed in a way that you are getting a lot of action without having to worry about a high volatility that would lead to a lot of big swings. Net Entertainment has definitely shown that this is one of their top titles from how they handled every aspect of the player’s experience in this slot.