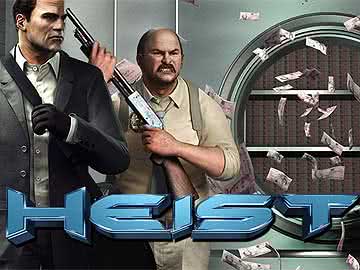 Heist is a 30-payline slot by BetSoft that features a theme based around a huge bank heist with plenty of money waiting.

Countless television shows, movies, comic books and other forms of media have centered around a bank heist of some sort. BetSoft’s Heist video slot is based on the same theme, and they have done three things to make this game stand out. First, it has really good graphics. Second, there are several bonus features. Finally, the regular gameplay has been made to be particularly solid as well. As a result of these three factors coming together, you’ll have a great experience with this game.

Format and Layout of the Heist Video Slot

This game uses the typical format that is shared by many BetSoft-powered video slots. It uses five reels, three rows and a total of 30 paylines with the ability to adjust the number of activated lines per spin. You can bet with coins that range from $0.02 to $1 in value, and players can bet as many as five coins per line. This lends itself to an overall betting range starting at $0.60 and going up to the dizzy heights of $150 per turn.

Make sure that you keep all of the paylines activated in this game, and if the bet size is too large for you, adjust your coin size or the number of coins per payline instead. This is very important because it keeps your RTP as high as possible and keeps the features coming as much as possible. This maximizes your value and your chances of winning over any given session. 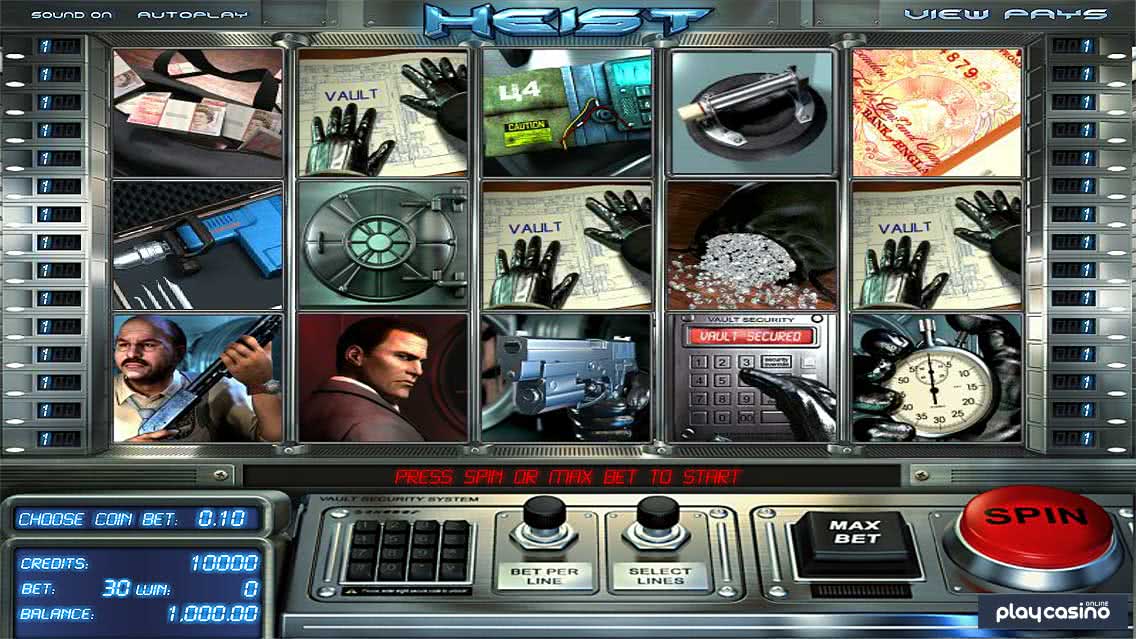 In the Heist online slot, the glass cutter symbol helps to trigger a bonus feature. Get three or more anywhere on an activated payline to get a random selection of a few different ways to get paid. You can pick up an instant win, a straight shot to the Codex Bonus Feature (the most important feature in the game) or a set of free spins. You’ll get a 2x multiplier on all of your wins if you activate the free spins in this way. 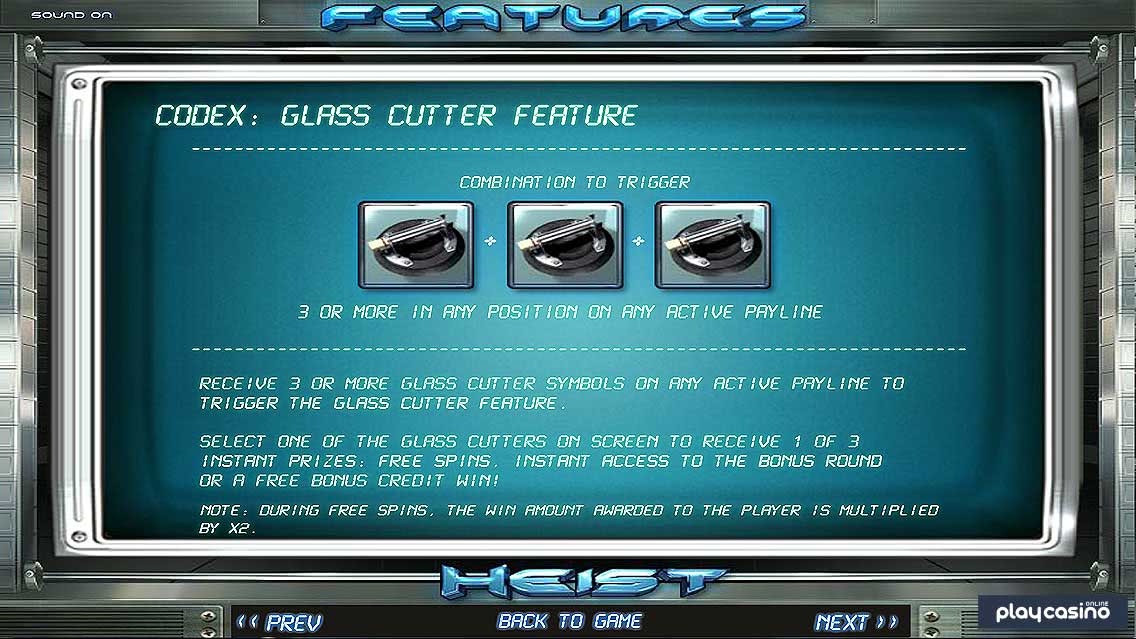 The C4 explosives symbol can show up on the middle reel. If it lands on the middle symbol (second from the top and bottom) on that reel, then it will trigger a huge explosion that will turn the entire reel into wild symbols. On top of that, every winning combination that includes a wild with this feature will have its value doubled with a 2x multiplier.

On top of this, the wild reel has a random chance of being locked into place for the following spin, and that gives you an opportunity to pick up even more value. From gameplay experience, it seems to be more likely to lock into place if you don’t pick up any wins from the original feature triggering. 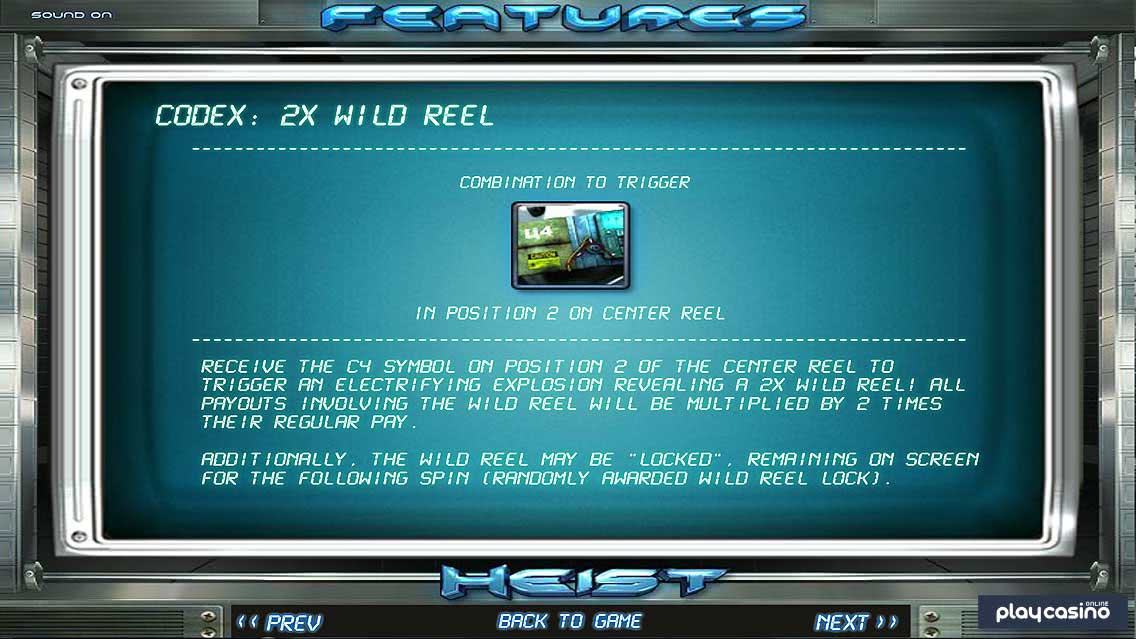 The blue and dark gray drill symbols in the Heist video slot give you a chance to pick up extra wins that are pretty sizable. This is a regular scatter symbol, and three or more anywhere on the reels will give you a payout. Three of a kind wins 150x with this symbol, and it jumps up to 300x for four. However, if you get five of this symbol on the game board at one time, you’ll be rewarded with a 750x payout, which is one of the largest in the game. 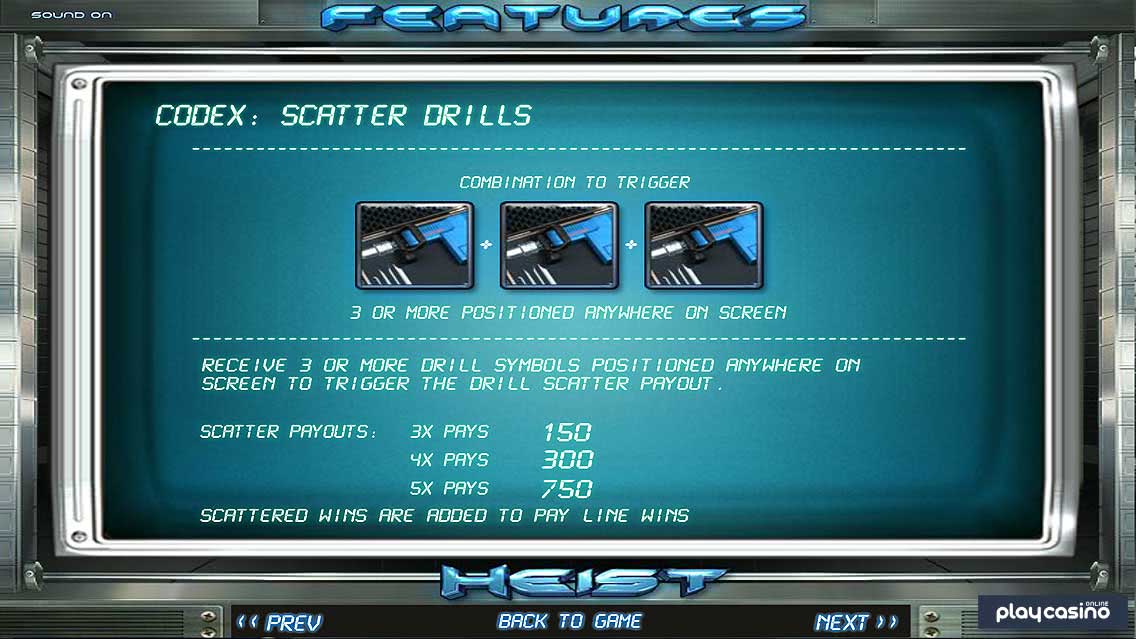 This feature is the point of the entire game, and that’s why so many of the other features center on it. You can enter this feature directly, or you can enter it through the glass cutter feature indirectly. That gives you two ways to get set up with a chance to pull down a major heist. 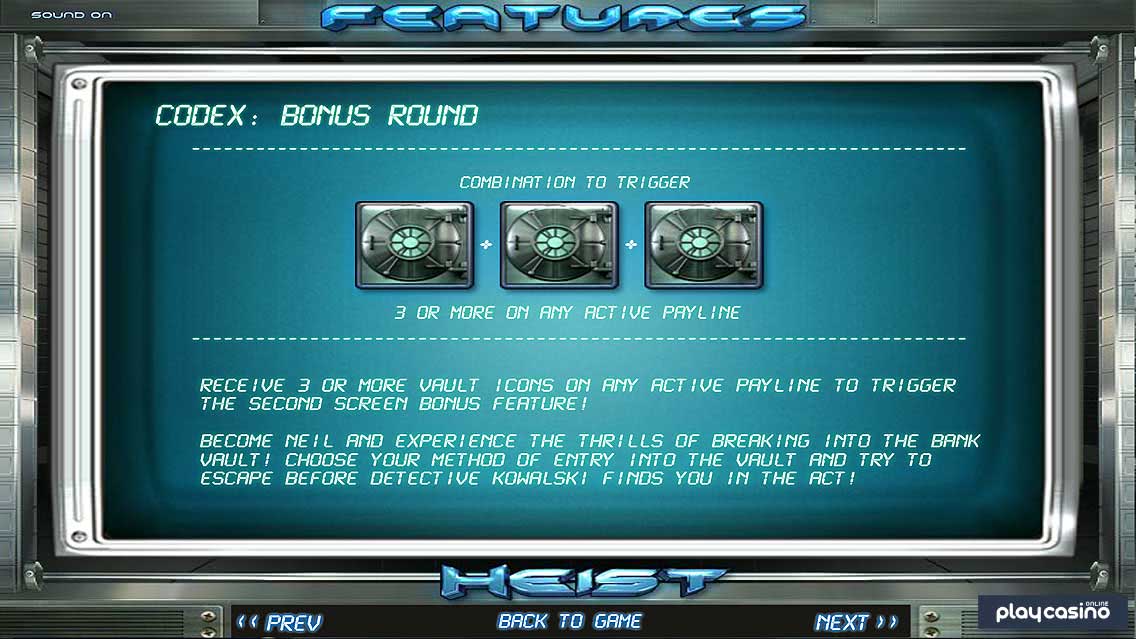 The Heist video slot has two character symbols. The first is Neil, the man who is trying to complete the bank heist itself, and the second is Detective Kowalski, the man who is trying to stop Neil. Five of the Neil symbol is worth 500x, and five of the detective gets you 400x. It’s important to point out that each of these symbols require just two of a kind on an activated payline for a win. They are the only symbols in the game to only require two for a payout.

There’s a sack of diamonds that are one of the main things that bank heists often revolve around, and it will get you a 300x payout for five of a kind. Five of the check notes pay 250x, and you can also win 200x for five of the bag of cash. These are all balanced, mid-level wins.

Moving further down the pay table, you can pick up 150x for five of the gun and 100x for five of the plans of the vault. Five of the keypad earns 75x, and you’ll get 50x for five of the stopwatch that times the heist itself. Even the low-level pays in this game are pretty balanced and smooth without any huge drops in value from one level to another, and that helps a lot with keeping the swings in check. 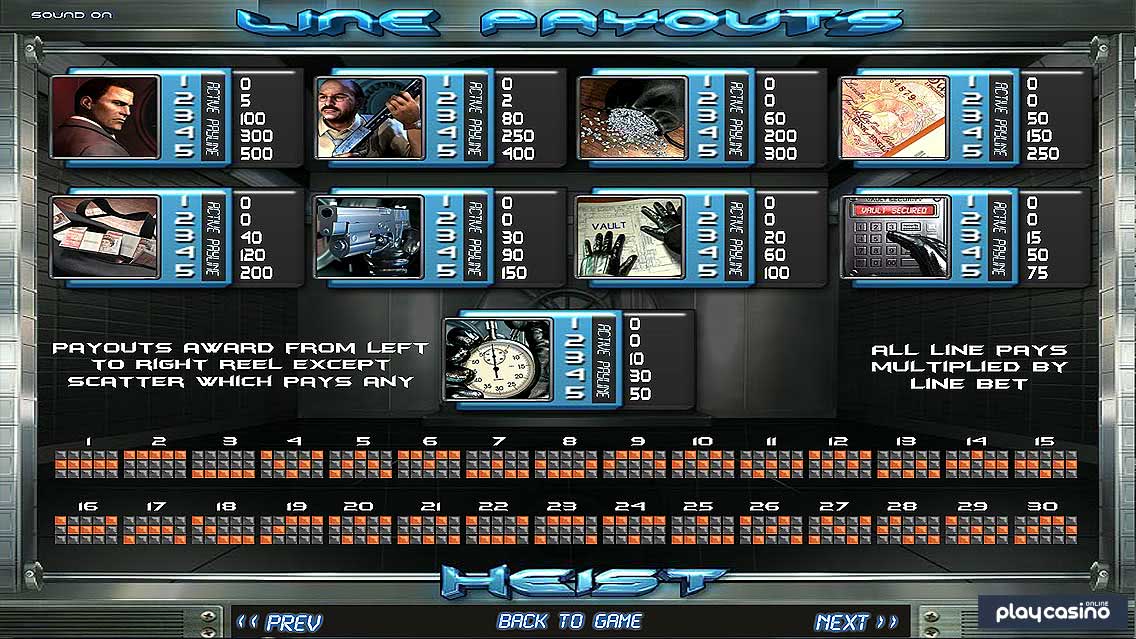 The Heist slot by BetSoft is a very solid game that has gotten a lot of attention over the years because of how well it has held up to the test of time. It has a high level of popularity even today, and that’s because it gives players a combination of the three biggest things they look for in slots: graphics, gameplay and features.

Overall, the excitement of trying to knock over a bank in this way is great for pushing forward the experience as you play this slot, and that also helps the situation. If you take your time and are patient, then you can slip in and slip out without getting caught by the detective.