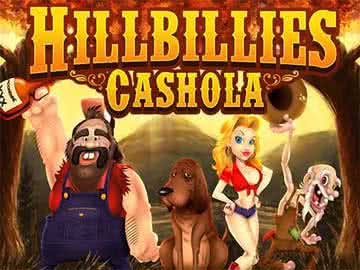 The Hillbillies Cashola online slot has multipliers worth up to 20x along with a free spin bonus round with instant prizes.

The cast of characters that you’ll find in the Hillbillies Cashola slot are pretty funny, and Realtime Gaming has used a particular style of graphics in this game that makes them come to life. In terms of gameplay, this slot has a number of features, and the stacked multipliers and free spins in particular are worth noting because they pack so much value. This is a great game that has gotten a lot of attention because of the combination of its visual appeal and gameplay values, and it’s easy to see why.

Format of the Hillbillies Cashola Slot

The usual nature of the format of this game can throw players off a little bit because the gameplay itself is not all that typical. It uses five vertical reels by three horizontal rows for the normal 5×3 layout. It also uses 20 paylines, which leads to some very even bet sizes. You should keep all 20 paylines activated at all times even though you have the ability to play with fewer than that. Having only 19 or fewer of them activated will give players a lower return to player percentage, so you should pick smaller coin sizes if you want a lower total bet overall. 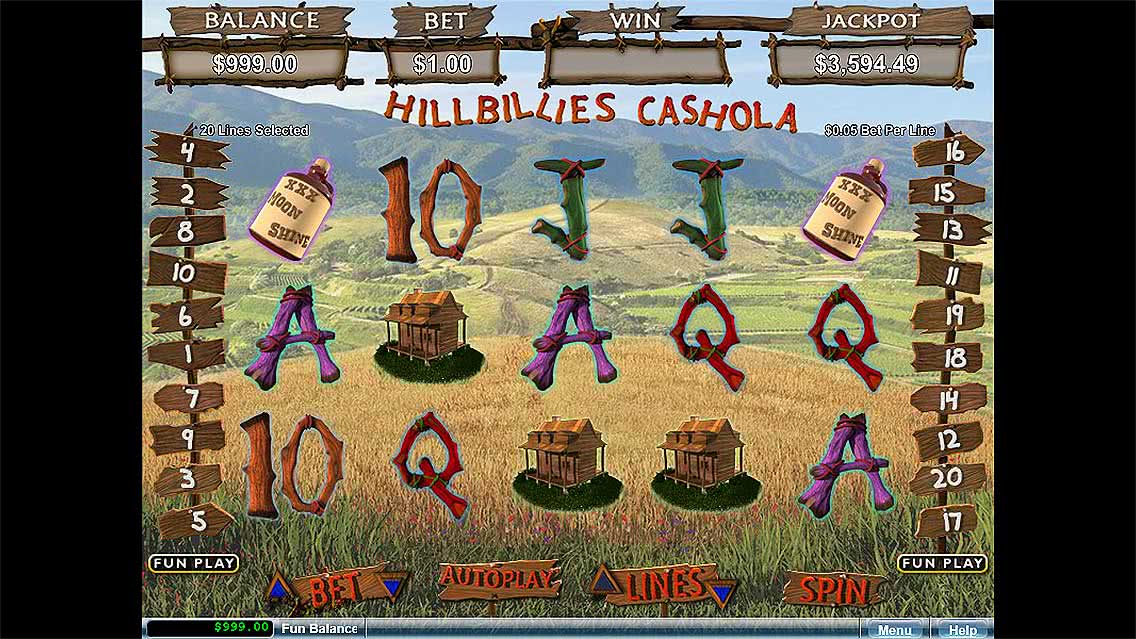 There are three hillbilly symbols that appear on the reels. An old man appears on the first reel, a woman shows up on the second, and a younger man holding a jug is on the third. These are the symbols that the entire Hillbillies Cashola video slot is built around.

The wild on the first reel gives a 2x multiplier, as does the wild on the third reel. The fifth reel wild, however, gives a whooping 5x multiplier, which can lead to some pretty big wins for what would have normally been four of a kind payouts. Different combinations of wilds can multiply, so you can end up with total multipliers of 4x, 10x or even 20x in the base game.

Another function of the three hillbilly symbols in the Hillbillies Cashola online slot is that they give scatter wins. Any two of them anywhere on the reels pays a prize worth twice your bet, no matter how they line up. However, if you get all three on the reels at the same time, then you get a larger scatter win of 10 times your total wager. These are some pretty decent prizes, but they make it apparent that these symbols hold a large portion of the value that you’ll get from playing the game, so you really want to see them appear.

To add yet another function to these three hillbilly symbols, two or more of them on the reels at the same time will get you a set of eight free spins. During these free spins, all payouts are given a 2x multiplier. However, the hillbillies themselves are a part of yet another feature during the bonus round, and it shows once again that they are the symbol you want to see the most.

Whenever you get any of the three hillbillies during the free spins bonus feature, you’ll be given an instant win. It doesn’t matter if just one of them shows up, if two of them show up or if all three appear on the reels at the same time. The first reel hillbilly gets a 2x instant win, the third reel gets 2x as well, and the fifth pays out 5x. These prizes are multiples of your total bet size, so they can really add up quickly. 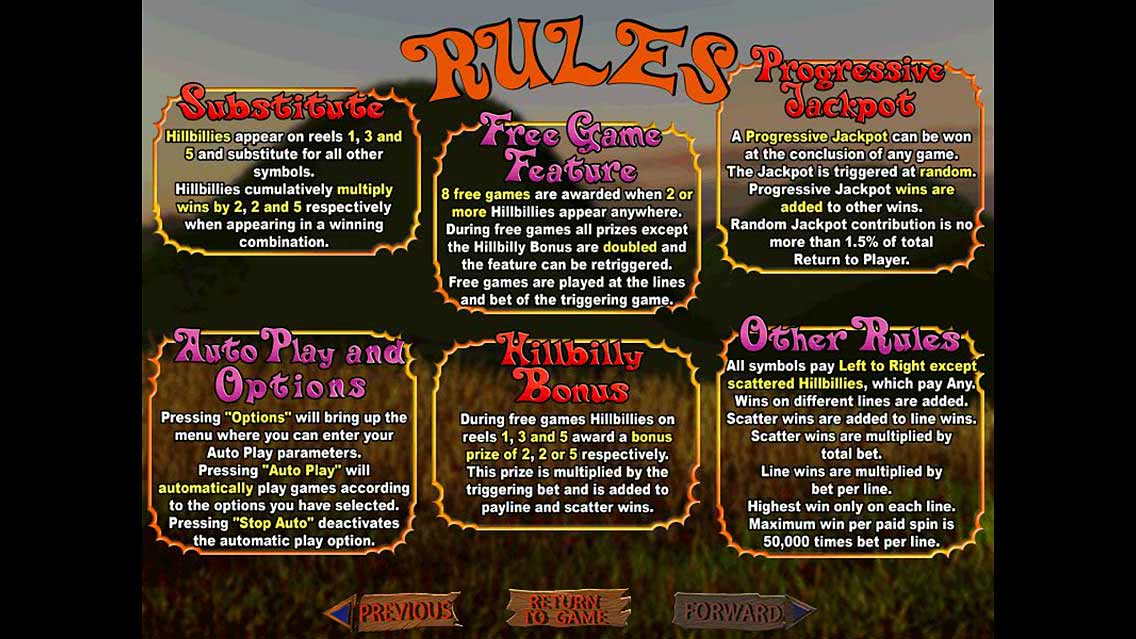 The dog symbol is the top regular-paying symbol in the game. Five of a kind gives you a 250x win with this symbol. If you get him with all three wilds, however, then that jumps up to a whooping 5,000x on top of the value that you would get from the scatter pays and free spin bonus round. As we’ve been saying this whole time, it’s clear that most of the value from the Hillbillies Cashola video slot come from the hillbillies themselves.

The payout for five of the pig symbol drops only slightly to 200x, and you can also get 150x for five of the cabin. The jug of moonshine is good for 150x with five of a kind as well. These four symbols all pay for two of a kind or more, and they all give some pretty substantial payouts when you take into account the wild multipliers and the multipliers you can get from the free spins feature.

At the top of the card rank symbols, you have the pink A and the purple K. These symbols both pay for just two of a kind or more, but they are the only card rank symbols to be this way. Five of a kind of either of these symbols will get you a win worth 125x, which is worth as much as 2,500x with the multipliers, assuming you get all three. Different combinations of just two can get you between 500x and 1,250x, so there are plenty of good payouts you can get here.

Moving on down the line, you have the red Q, green J, orange 10 and yellow 9. All four of these symbols need at least three of a kind to make a winning combination. Additionally, they all pay 100x for five of a kind without any wild symbols. 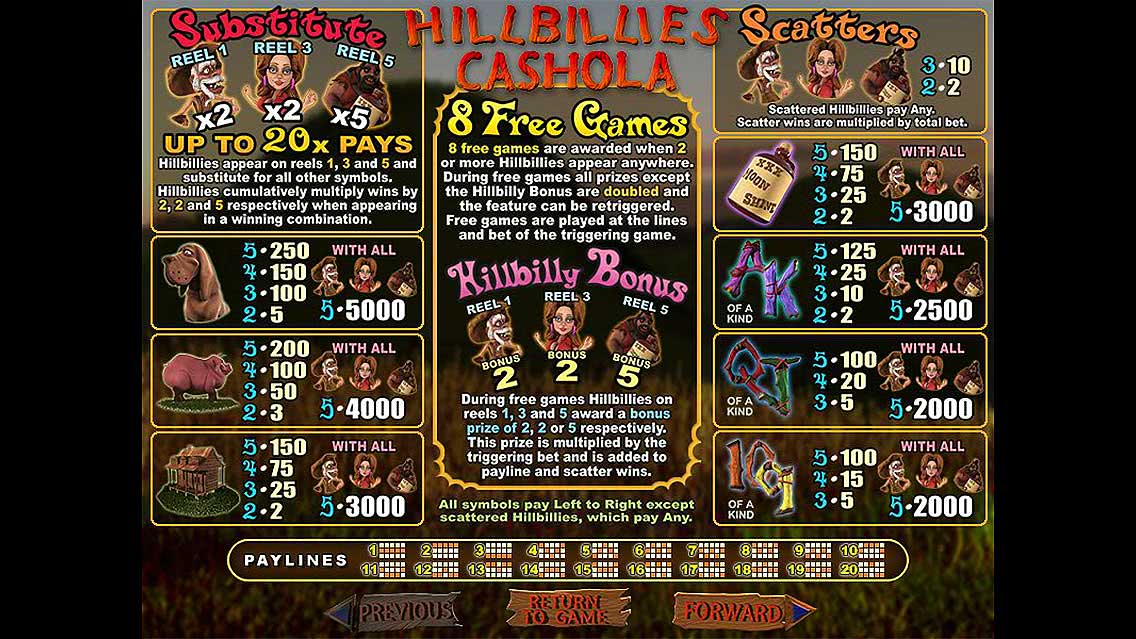 As we’ve mentioned above, the gameplay of the Hillbillies Cashola online slot is what really makes it stand out. Realtime Gaming has taken a slot with a fairly tame theme and turned it into a great experience for players by building out lots of features based around the characters they greated for the theme itself. This is a great way to handle a lot because it creates an immersive style of gameplay for players. It also gives you a chance to win big payouts with any of the symbols in the game, which is something that virtually no other slot can guarantee. Overall, this is a title by RTG that gets a lot of attention because of how fun it is to play.