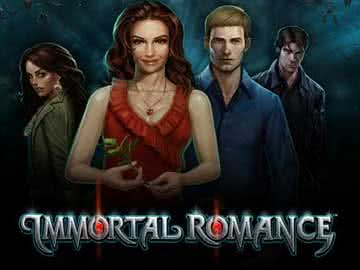 The Immortal Romance slot by Microgaming features multiple free spins features and a vampire and werewolf romance story with 243 ways to win.

Vampire- and werewolf-themed romance stories have always done well. Studies have shown that they produce some of the most popular romantic fiction ever written, and it’s not surprising that movies based around these concepts have done particularly well also. Microgaming’s Immortal Romance slot is based around this type of theme, and that in and of itself has made this game particularly popular over time. However, the in-depth features and tremendous pay table have also pushed this title over the top to make it one of their most popular releases ever.

Format for the Immortal Romance Slot

Players will find that this game is designed for action with its five reels, three rows and “all ways” format. All regular symbols pay no matter which positions they show up on as long as they appear on consecutive reels starting from the left and going to the right. This gives players an effective 243 ways to win in this game, and that’s the foundation of the action that the Immortal Romance video slot has to offer.

Betting is made pretty easy too. You’ll be wagering 30 coins per spin at the base level, but you can multiply that by a factor of up to 10 for a total of as many as 300 coins being wagered on each spin.

All of the payouts in the game are based on mulitples of the total bet size. As such, we are going to describe the available wins based on a wager of $1.20 per spin. If you play with a different bet size total per turn, then the payouts you get from the different winning combinations will vary proportionately. 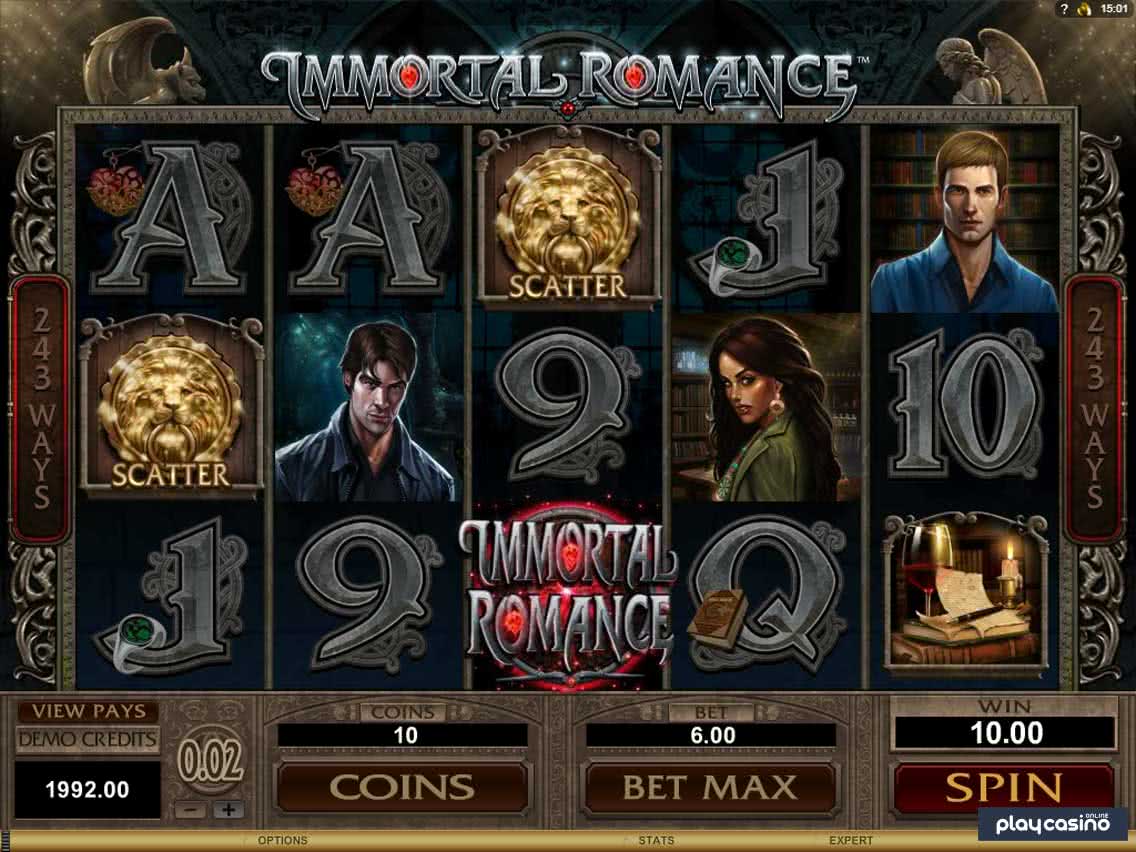 The Immortal Romance online slot symbol appears on all five reels, and it is the wild symbol in this game. It’s also responsible for one of the largest payouts in the entire slot, and that’s a payout of 60x for five of a kind. Four of a kind wins 10x, and three will get you 4x. This symbol substitutes for every single symbol in the game except for the scattered lion’s head knocker symbol.

An important factor with the wild symbol is that it’s also a 2x wild multiplier. If you make a regular winning combination that includes at least one wild symbol, then you will win twice the normal payout amount for that combo.

Wild symbols mean a lot more in “all ways” style games than they do in other slots with traditional payline structures because they make it so much easier to hit multi-line wins on the same spin. The Wild Desire feature takes that a step further and gives you a chance to get wild reels at random. When this feature activates, you’ll randomly get between one and five reels turned completely wild. The Wild Desire feature triggers at random, and you cannot earn a free spins bonus round on the spins when you get it. 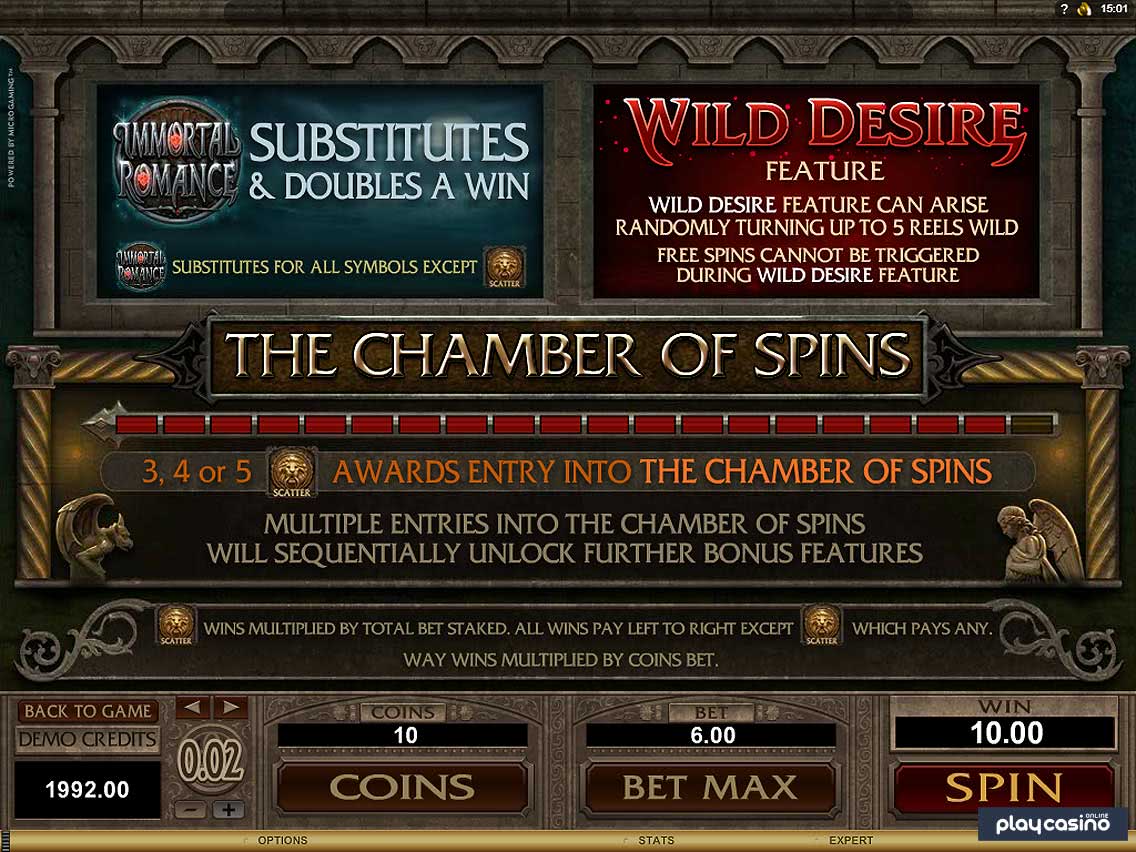 The Chamber of Spins and Scatter Symbols

The scatter in the Immortal Romance video slot is the door knocker that’s a golden lion’s head. This symbol pays out 240x for five located anywhere on the reels, which makes it the best-paying symbol in the entire game. You’ll win 24x for four of a kind, 2.4x for three of a kind and 1.2x for two of a kind. This is the only symbol in the entire slot that gives you a payout for just two of a kind, and they can show up anywhere on the game’s reels for payouts.

Three or more of this symbol will give you entry into The Chamber of Spins. This gives you a choice between four different bonus features that you have to unlock based on how many times you’ve triggered the features. Each set gives you a different number of free spins with different extra features, and the four free spins modes are based on the four main characters of the story that this game is based around. 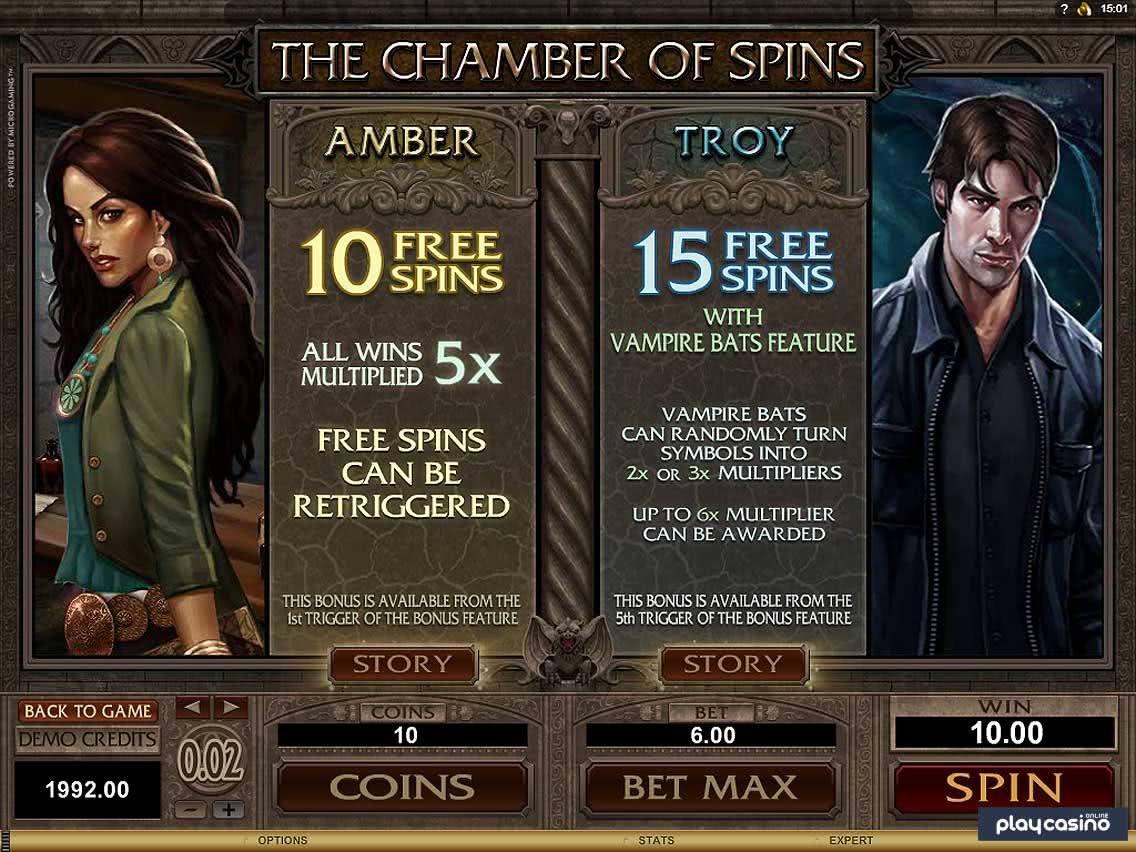 The four free spins modes are based on the four characters in the game: Amber, Troy, Michael and Sarah. They each give you different types of free spins games.

After 10 free spins rounds, you’ll be able to play Michael’s mode. It gives 20 free spins, and you get the Rolling Reels feature with escalating multipliers that range from 2x to 5x. Finally, 15 triggers of the Chamber of Spins opened up Sarah’s feature, and she gives players the most free spins you can get at one time with 25. The wild vine feature is active here, and it gives you a wild vine symbol on the middle reels that will reach out and turn other symbols wild.

During Sarah’s feature, it’s also much easier to get extra free spins. Two, three, four or five of the scatter will add an additional one, two, three or four free spins to your total. 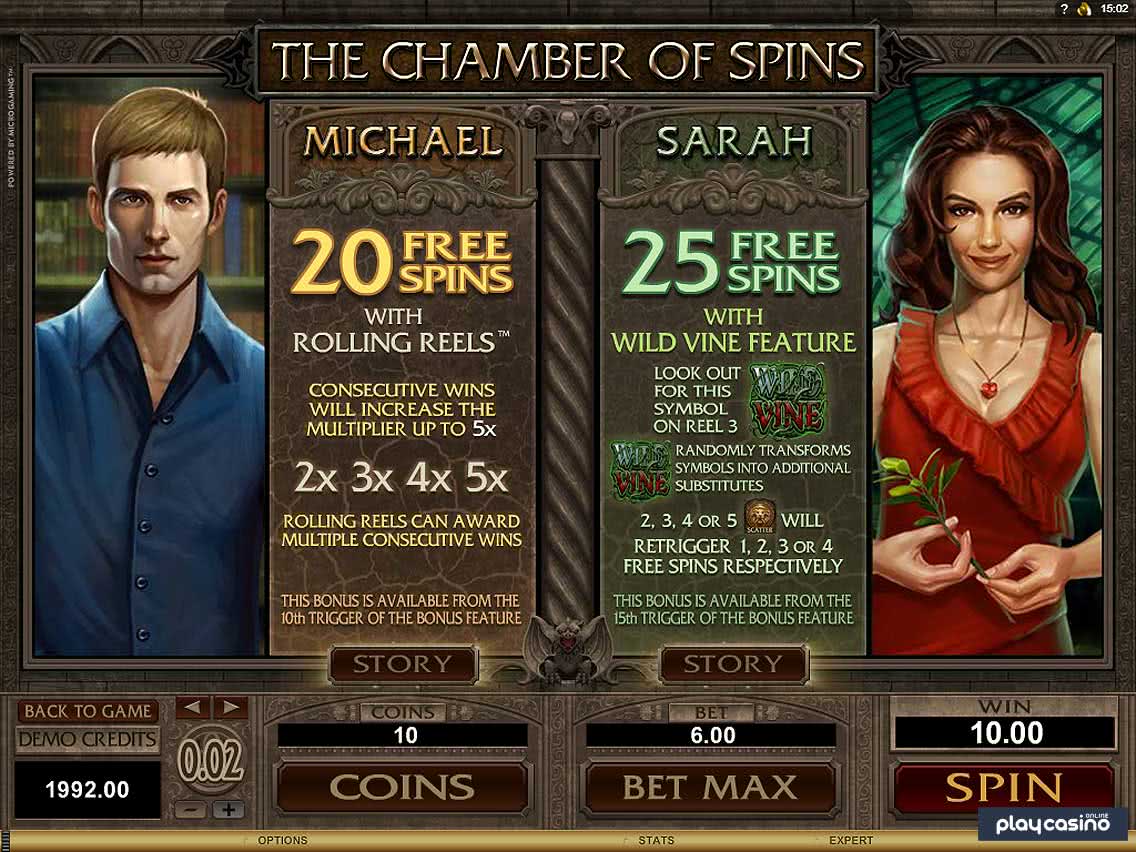 These four character symbols also give you mid-level payouts. Five of Sarah in the red dress is worth 20x, and five of Michael in the blue shirt gets you 18x. Troy is worth 16x for five, and Amber pays 14x for five of a kind. The house symbol earns 12x for a five-of-a-kind combination, and the books in the library gets you a solid 10x win with five of a kind.

Six different card rank symbols round out the bottom end of the pay table, and their payouts come in pairs. The A and K symbols pay 6x for five, and five of the Q or J gets you 5x. The 4x payout is yours for five of a kind of either the 10 or 9 symbols. All six of these card rank symbols are styled in a gray, Gothic font that’s perfect for the theme and that fits in really well while looking great. 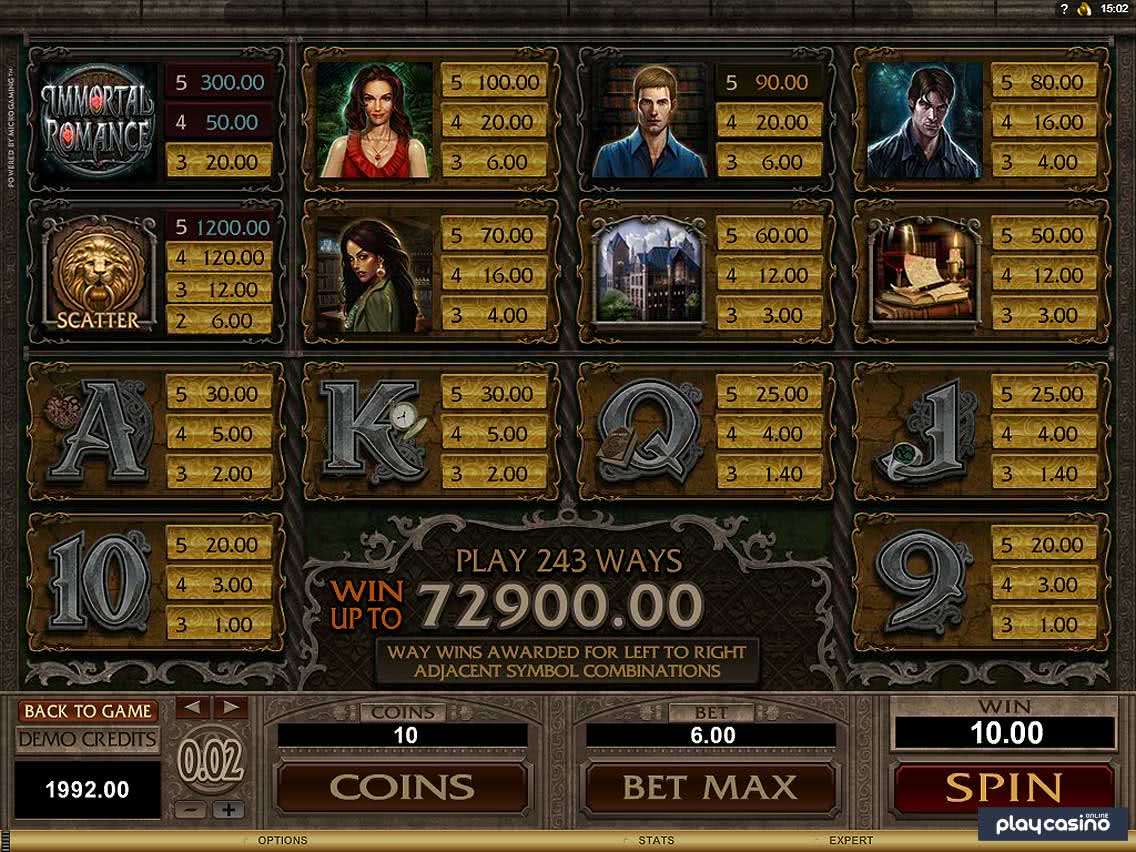 Immortal Romance is one of the most popular video slots that Microgaming has ever produced because it gives players a popular type of theme paired with great graphics and terrifice gameplay. That is the ultimate combination to great a game that will stay popular for several years, and that’s exactly what happened here.