It Came From Venus 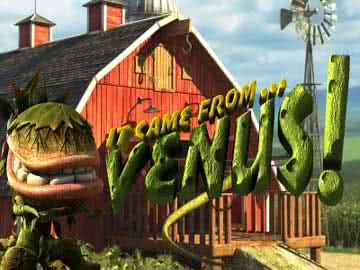 The It Came From Venus slot is a BetSoft-powered game based on a farmer who finds a giant, alien plant has landed on his farm.

BetSoft has always used some pretty crazy themes and concepts for their games in an effort to stand out from the crowd. Their It Came From Venus slot might show this better than any other game in their portfolio because it’s based on a giant, alien plant that lands in a farmer’s fields. He grows attached to the plant, thankfully not in the literal sense, but the military comes looking for it. You won’t find any other game in the industry that uses this type of theme, and that’s a level of originality that you’ll rarely see.

Play It Came From Venus Slot for Free

Format of the It Came From Venus Slot

There’s a particular format that a lot of the Slots3 games from BetSoft’s main line off video slots uses, and this title is no exception. You’ll get five reels, three rows and 30 paylines. Like many games from this provider, you can play with fewer than 30 paylines if you really want to. We can’t recommend it, however, because it’ll drop down your return to player percentage. It’s better to choose smaller coin sizes and fewer coins per payline instead.

Your betting options are pretty straightforward, and they allow for a lot of flexibility when it comes to really getting down to the bet size that you want. You’ll be able to put up to five coins on each payline for a betting range of 30 to 150 coins per spin. Those coins can be worth from $0.02 to $1 apiece, giving you between $0.60 and $150 per spin in terms of total bet sizes. This is obviously enough of a range that everyone from penny players to high rollers will find a suitable bet size. 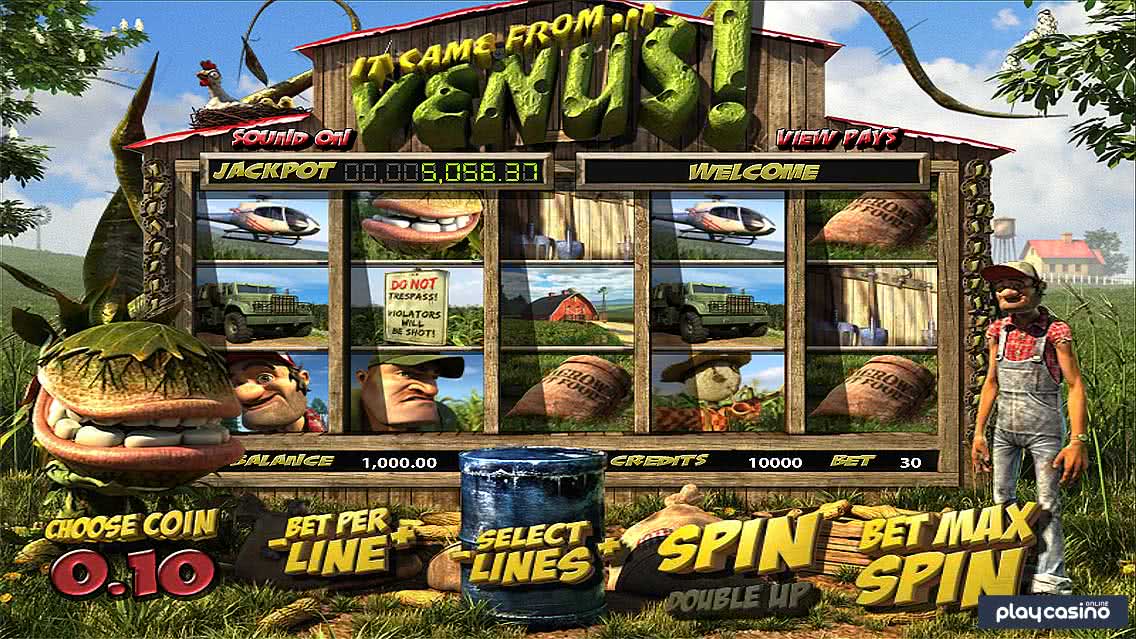 The It Came From Venus video slot does not have typical wilds. Instead, they can appear at random on the second and fourth reels. Obviously, you can’t have winning combination with just the wilds with these symbols only appearing on the second and fourth reels, but what you do get are multipliers. They will give you multipliers of up to 4x on wins that include them, so that adds a pretty solid amount of value. Moreover, these symbols substitute for everything but the scattered signs, helicopters and feed sacks.

During the regular game, you’ll see feed sacks show up on the middle reel. You’ll collect these as gameplay proceeds, and when you have gotten five of them total (they don’t have to be on the screen at the same time), then you’ll be taken to a free spins bonus feature. The plant at the heart of the It Came From Venus online slot is the key to these free spins because the feed sacks become sticky wilds. They will stay in place when they appear for the remainder of the free spins and give you extra wild symbols the entire time.

There is a no trespassing sign that appears on all five reels. It gives you scatter payouts in this game. The win for five of a kind is 750x, and you’ll also pick up 150x for four. A win of three of a kind gets you a 60x payout. The sign actually says, “Do Not Trespass! Violators Will Be Shot!” In case you’re wondering, this is a real sign that does exist that some real people have in the real world.

If you get an entire reel full of the same symbol on the first, third and fifth reel, then you get an extra win of twice your total bet size. This is kind of a random, instant win payout that doesn’t really tie into anything to do with the theme of the game, but it’s a cool way to award wins without really taking time out of the normal gameplay, so we’re all for it. 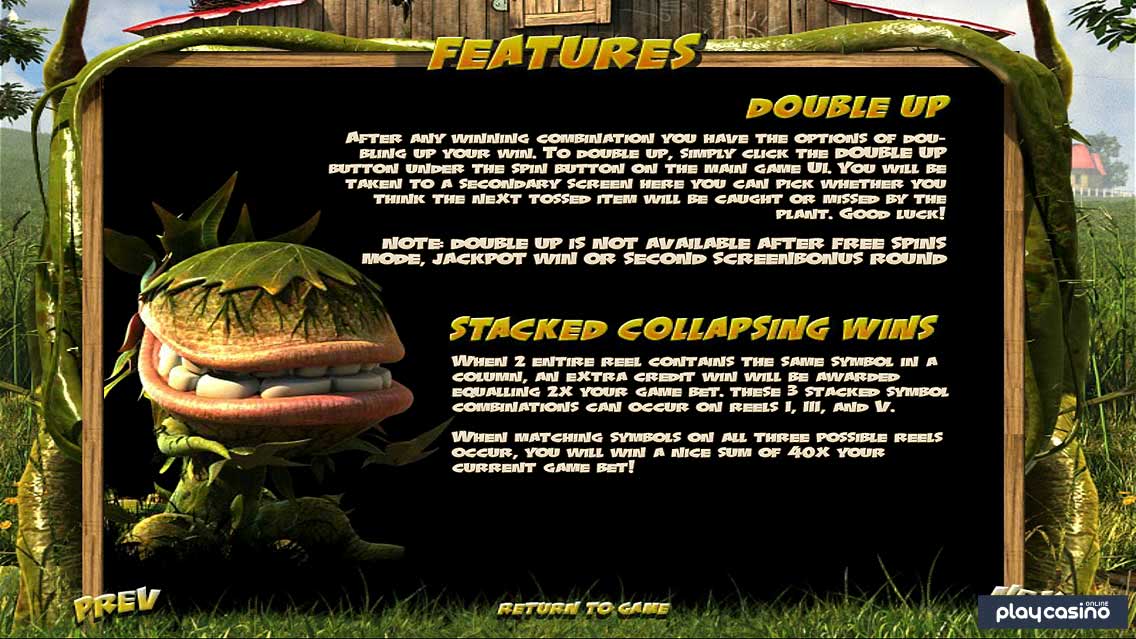 If you play this game with five coins per payline, even if you’re playing with small coin sizes, then you’ll activate the progressive jackpot. Five of the alien plant symbol will trigger the jackpot in this case. If you don’t have the max bet activated along these lines, then you get a different payout instead. It’s worth pointing out that the minimum wager to activate this progressive in the It Came From Venus video slot is $3 per spin, which may be too high for some players to be comfortable with. Your RTP will drop slightly as a result, but it’s not enough to be too concerned over.

Save the Plant Bonus Feature

The final bonus feature that this game has to offer is all about the military coming in to take away the alien plant. They succeed in kidnapping it when three of more of the helicopter symbols hit the reels at once, and you’ll have to figure out which box it’s in to trigger some instant win payouts. This is another way to award quick-and-simple bonus payouts, but this time, it fits directly into the theme of the game. 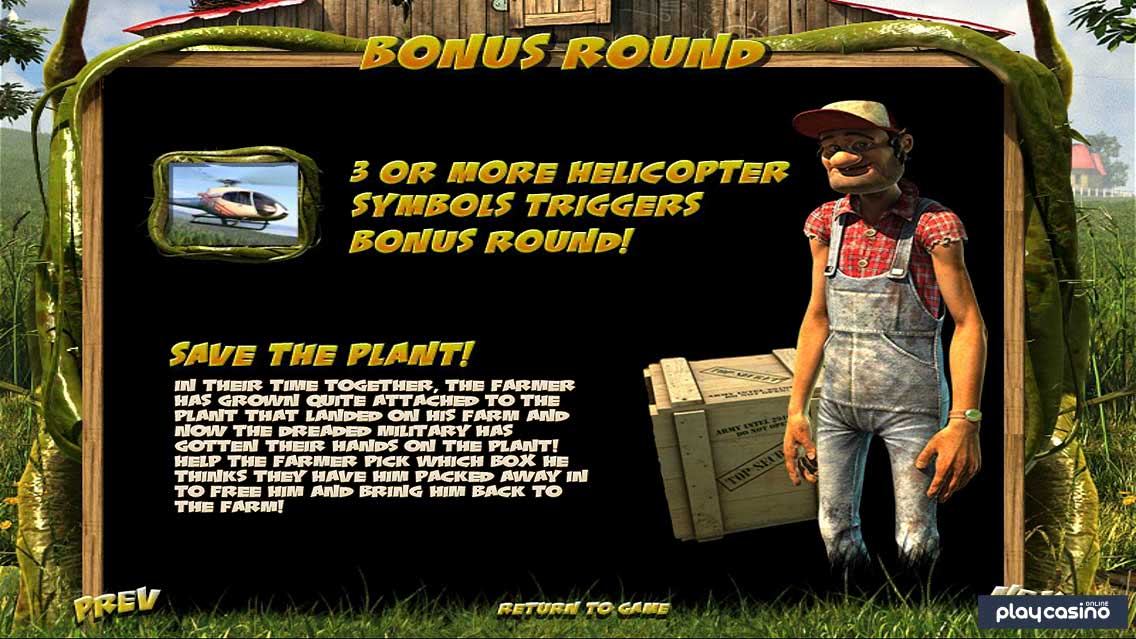 The highest-paying regular symbol in the It Came From Venus online slot is, naturally enough, the alien plant that presumably came from Venus. He pays 500x for five of a kind if you’re betting with fewer than five coins per payline, and he awards the progressive if you are playing with five. You’ll get 250x for five of the happy farmer symbol, and the win drops down to 150x for five of the soldier from the military. Five of the scarecrow symbol also awards you 150x.

The lower end of the pay table starts with the military Jeep. It gets you a win of 120x for five on an activated payline, which is the same win for five of the pile of alien goop. You can win 45x for five of the dog house, the barn or the tool shed symbols. All of these symbols tie into the story of the game really well, and they didn’t use anything resembling a generic symbol like card ranks in this slot. 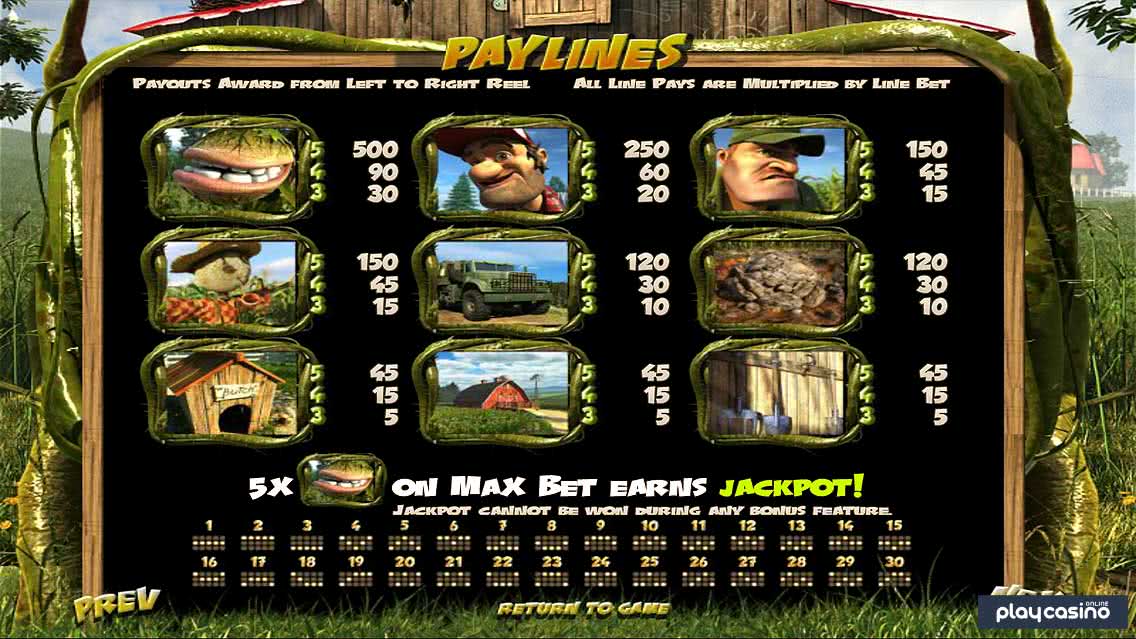 It’s not surprising that the It Came From Venus slot is one of the most popular games BetSoft has ever produced. The graphics are competitive with anything the online slots industry has ever produced since, and the gameplay is filled with chances to win with a plethora of wild-, multiplier- and instant win-based features.

The pay table is very balanced as well, which lends itself to a reasonable volatility, and that’s a good thing with all of the extra variance you’ll get from the random features and progressive jackpot. Overall, this game’s popularity is the direct result of how good of a job BetSoft did with it since it’s a game that does not rely on some kind of big brand from other forms of media to build up clout among players.