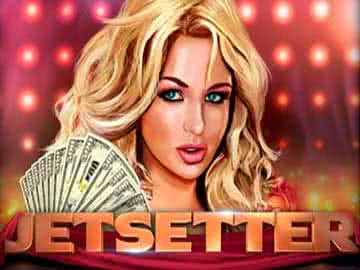 Endorphina’s Jetsetter video slot is a game based around a luxury traveling theme. There are a lot of games that use a luxury theme, and there are some that have based on travel in the general sense, but you rarely see them both put together at the same time. This slot is a great example of this software developer putting their own spin on already-existing themes to create something that really stands out from first glance. What’s more is that they’ve included a strong style of gameplay along with it as well.

In terms of graphics, it’s important to note that there’s a lot of pink in this game, but they don’t slap you over the head with it like a lot of other pink-centered games do. The combination of black and pink keeps it from being too feminine, and instead, it gives it a very solid feel.

First and foremost, you have to understand that this game has a particularly high volatility. There have been some efforts here and there to dampen it a little, but it’s ultimately a wealth-based slot that’s structured around giving players chances to hit some pretty large payouts. As a result, you’re going to have a lower hit-rate and a higher volatility. You can compensate by picking smaller bet sizes. 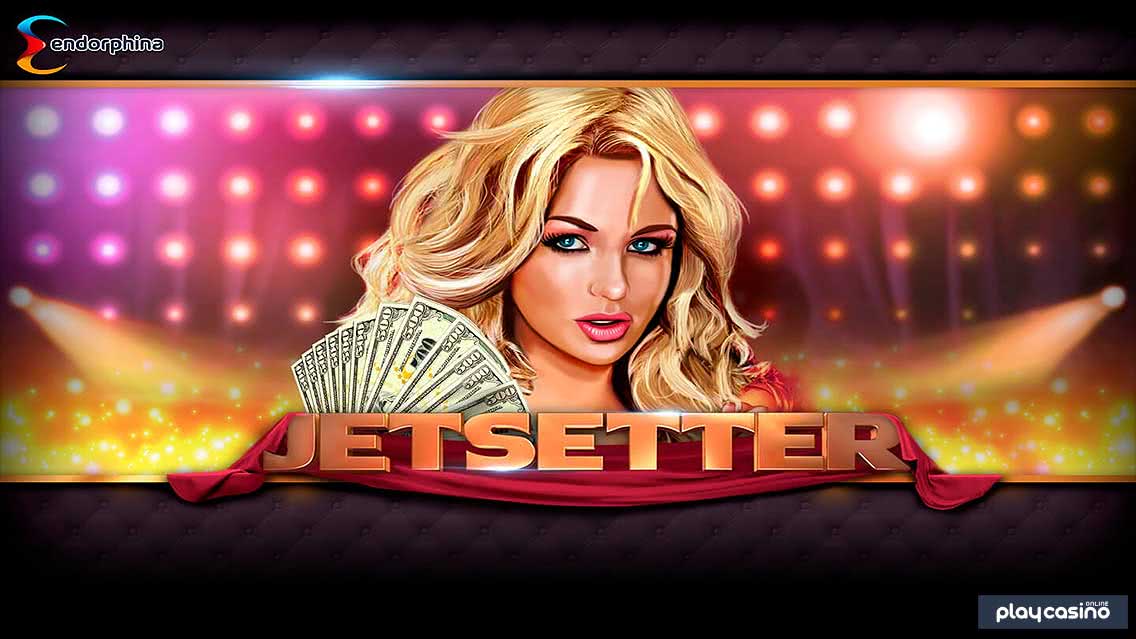 With that understanding, this game has a solid basic layout that uses five reels and three rows. There are 20 paylines, and you can pick coin sizes that go from $0.01 to $1 apiece. To help narrow down the exact bet sizes that you want, you have the option to wager up to 10 coins on each of the available paylines, which means the total betting range goes from $0.20 to $200. 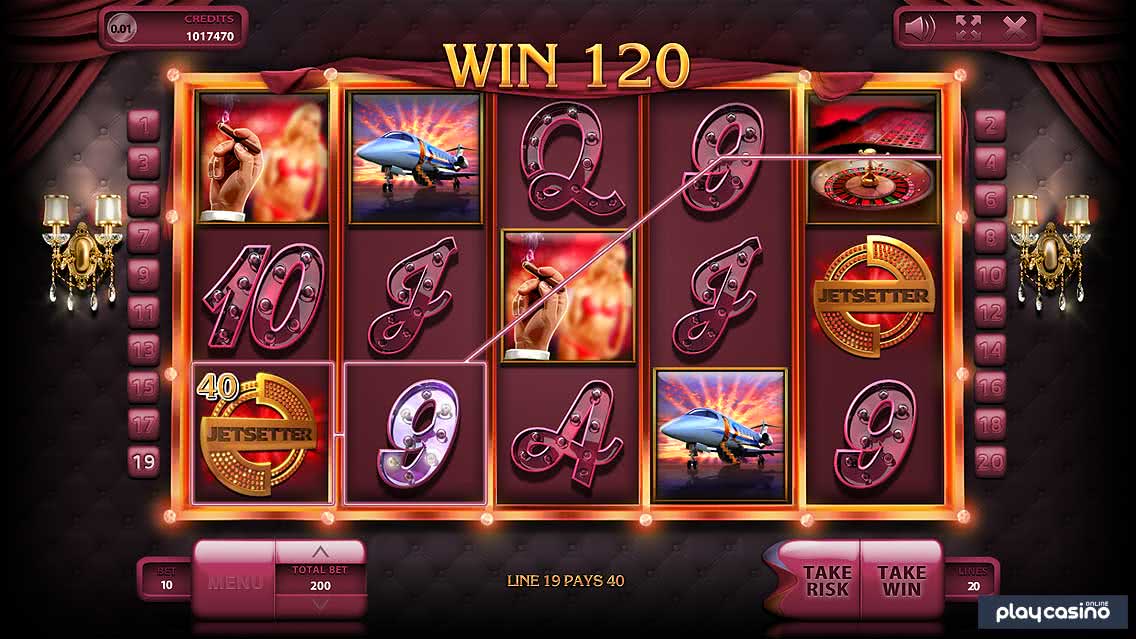 In many video slots, the wild is a very important symbol. This is very much the case in this game as well, and the golden Jetsetter symbol is the wild here. Five of a kind will pay out 9,000x, which is a huge amount, but it’s actually only the second-largest jackpot that you’ll find in this game. Four of a kind pays 2,500x, which is significantly larger than the top jackpot in most video slots. Three of a kind or two of a kind pay 250x and 10x, respectively, both of which are decent sums considering how many symbols you need to line up.

As if this symbol didn’t pack enough value, it also acts as a 2x multiplier. Whenever you get at least one wild in any winning combination, it doubles the size of that combination. It’s worth noting, however, that it does not substitute for the scatter, which would really add a ridiculous and overwhelming amount of value considering the payouts for the scatters. 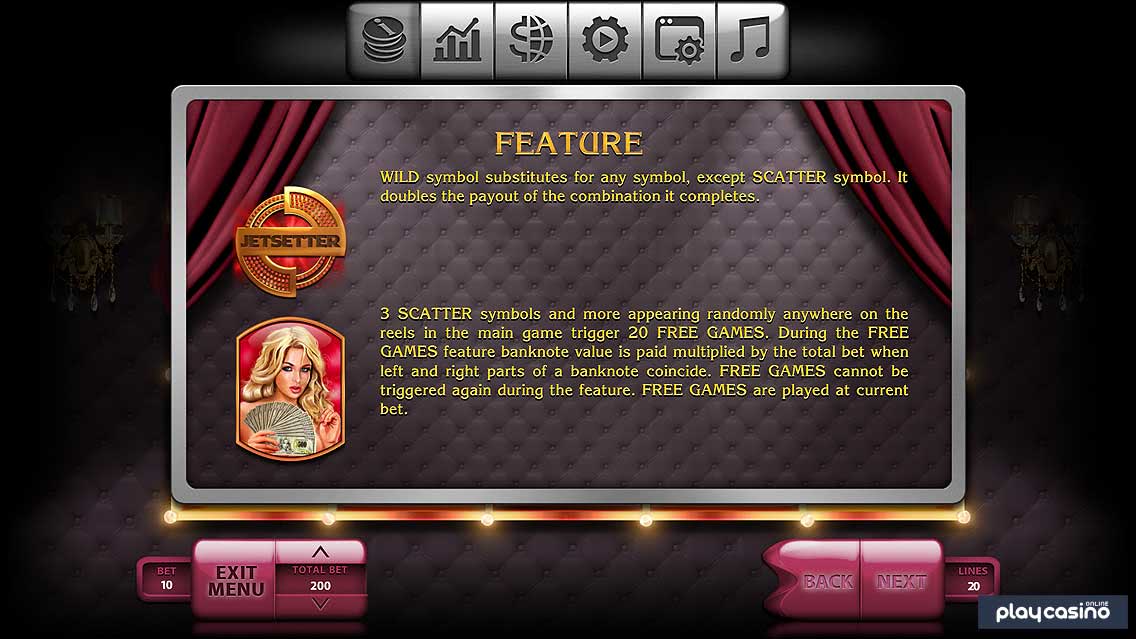 There’s a woman who appears with a lot of money on the loading screen for the Jetsetter video slot, and she’s who shows up on this game’s scatter symbol as well. She’s got a ton of money, and the reason for that is that she’s responsible for the single largest payout in the game.

It’s a toss-up on which symbol is the most important in this game between the wild and the scatter. You’ll want to see both of them as much as possible, so we’re going to call it a tie. 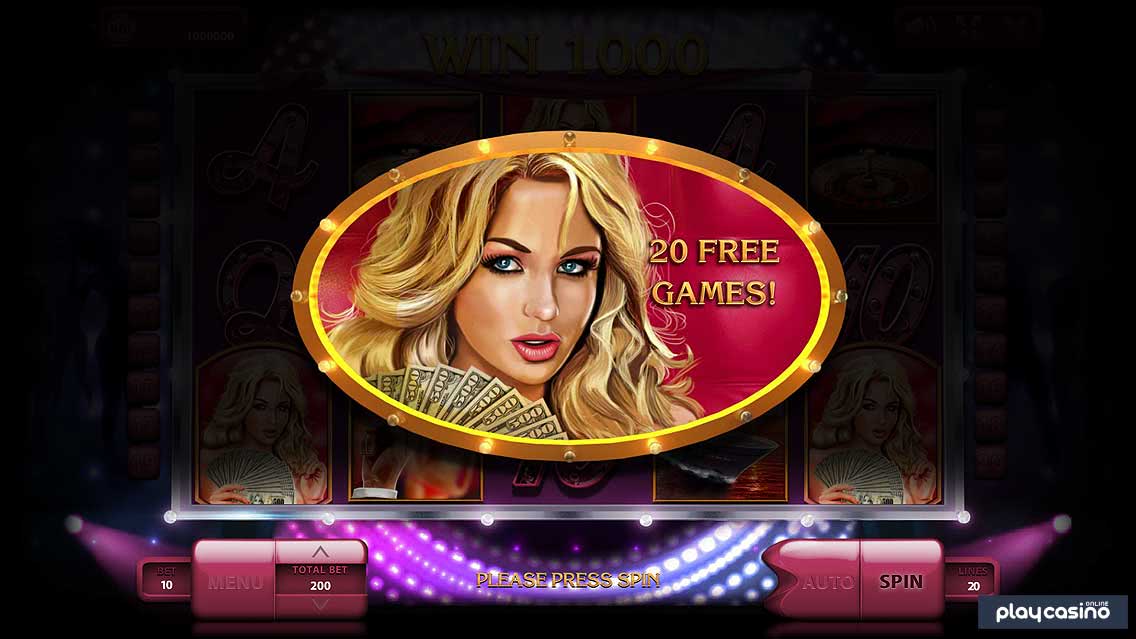 The Jetsetter slot machine has a free spins bonus round that includes special bank notes symbols that are split in half. Whenever you get two side-by-side that match up, you’ll get an instant win worth the face value of the note. This is a really atypical style of extra feature for a set of free spins, and we can’t remember having ever seen it used in another game.

What this essentially breaks down to is that you have a chance of getting a special instant payout on any given spin after you activate this feature. You’ll get 20 free spins for picking up three or more of the scattered woman symbols anywhere on the reels along these lines. 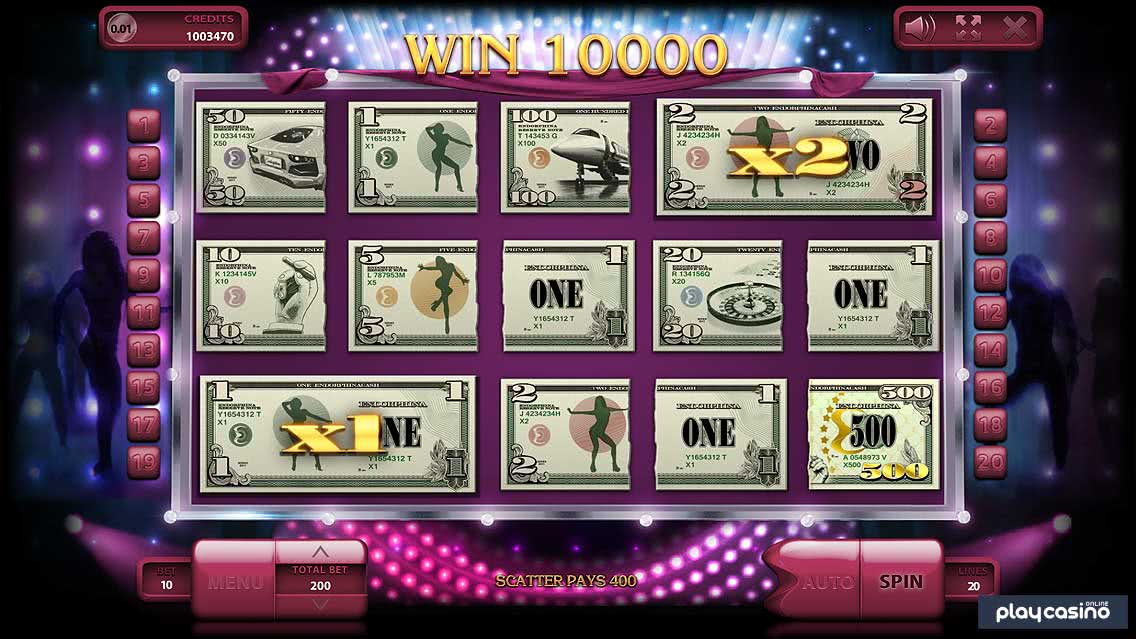 There are three major travel-based symbols that you’ll find in this game. The first two are a yacht and a private jet. Each of these will pay 750x for five of a kind, which is a pretty serious drop from the five-figure and four-figure top pays you see from the scatter and wils. You can get paid for two of a kind or more of either of these symbols, which dampens the volatility very slightly.

The next symbol is the yellow luxury sports car. Five of a kind gets 400x, and four of a kind pays 100x. You can also win with three of a kind for 20x, but there aren’t two of a kind wins for any other regular symbols except for one exception that we’ll note below.

The roulette wheel and the woman dancing behind the man holding the cigar are the last two symbols in the mid-level range. They indicate a gambling and entertainment lifestyle, and five of a kind pays 250x. 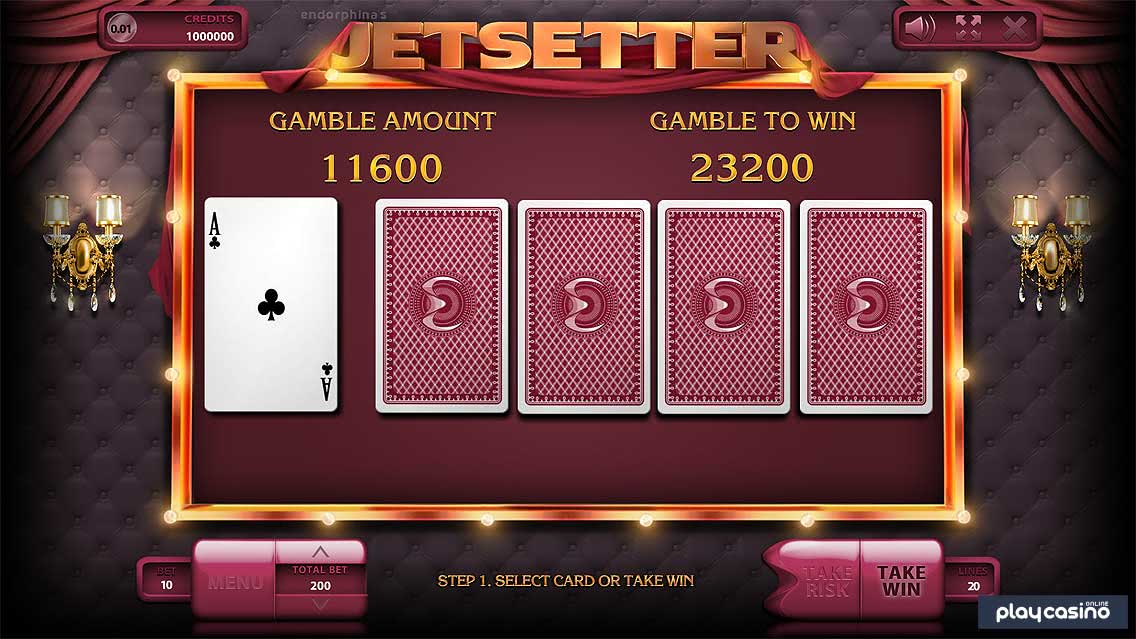 A lot of online slot providers use card rank symbols in video slots as a sort of shortcut or lazy way of filling out the lower end of the range of symbols in a game. Endorphina has used six different card ranks in this game, but they weren’t lazy about it at all. All six of them are stylized in a way that fits in perfectly with the visual style of this game, and they’re decorated with lights like an old style of entertainment sign.

The A and K both have the same payouts with 125x going for five of a kind. With a Q, J, 10 or 9, you’ll earn a solid 100x win for five of a kind. The only difference between the payouts for these four last symbols is that the 9 actually pays a simple 2x win for just two of a kind. It’s the only card rank symbol to do this. 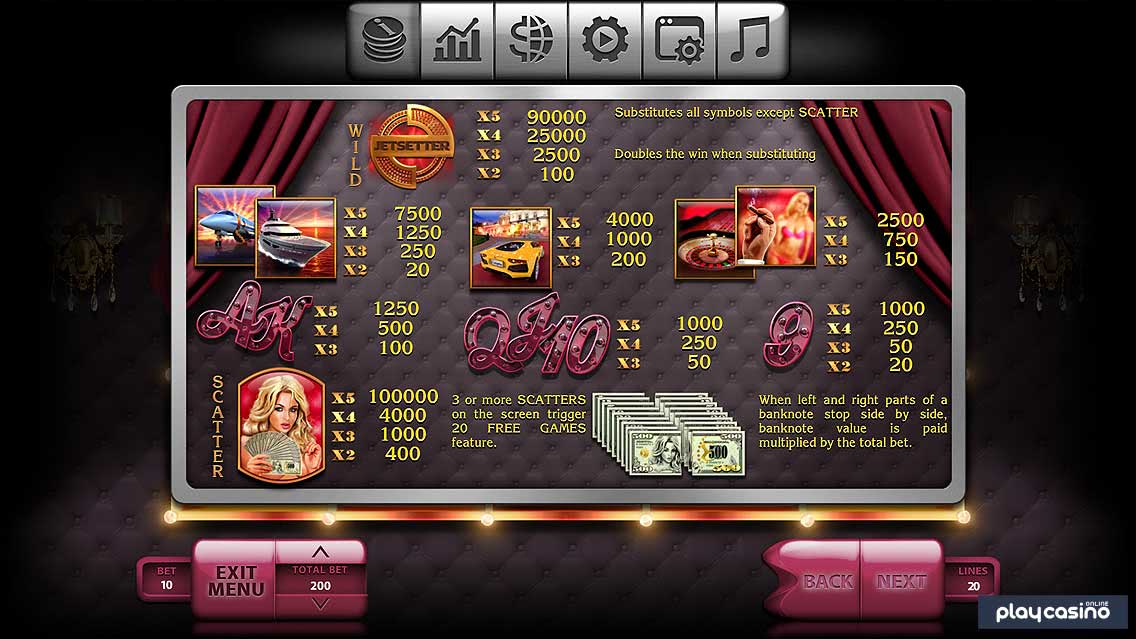 Endorphina has done a solid job with producing a high-volatility slot in Jetsetter. There are several strong jackpots, a value-packed free spins feature and a cohesive theme that brings it all together. This is one of the more iconic titles that this company has created, and it’s gotten a ton of attention for having a particular style of gameplay that fits with the theme, bonus feature, symbol set and every other aspect of the slot.