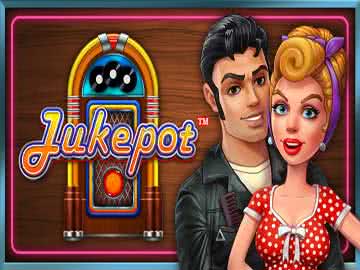 The Jukepot video slot available from NYX Gaming has 243 ways to win with locked reels that give you duplicate symbols to make it easier to win.

The 1950s were a time known for jukeboxes, music and hanging around the diner. All of this is captured very well in NYX Gaming’s Jukepot slot. The graphics are solid in this game, and you can see the diner behind the reels, but the action from the spins is pretty hot as well. You’ll have some features that drive home the action in this game, and the regular pay table itself gives you some pretty good prizes too.

The Jukepot Slot’s Format and Layout

The layout of this game is actually key to the gameplay, which is different from most games where it’s a footnote at best. With five reels and three rows, the format is pretty standard, but because it uses the 243-ways format, you’ll have tons of ways to hit wins on each spin. This drives up the action in a major way since every normal-paying symbol acts as a left-to-right scatter.

Betting in this game takes place in increments of 25 coins per spin. You get to choose a coin size, but you’ll always be betting 25 coins on every single spin you take. The smallest coin size available is $0.01 for a $0.25 minimum wager. You can pick coins as high as $2 as well, and this gives you wagers that run up to the $50 level. No matter what stakes you play, you’ll have a bet size available that works for you.

There’s a stylized logo for Jukepot that makes its way onto the reels, and you can get some scattered wins with this symbol. Five of a kind gives you a very serious 250x payout with this scatter, but you can also earn 125x for four anywhere on the reels. Three pays 50x, but remember that these wins don’t have to be from left to right like the rest of the wins for the regular symbols because this is a true scatter.

We feel that should point out that this is the only symbol in the game that does not pay like a left-to-right scatter.

After you press the spin button, you have a chance to see two, three, four or five symbols light up with a different-colored background. When this happens, they will sync up for the locked reels feature. This feature makes sure that the result of the spin is that each of those locked reels has the exact same symbols on it, and when you combine that with the 243-ways format that this game uses, you get a lot better chances to hit winning combinations.

This feature hits at the same rate no matter what stakes you’re playing at, so all players get an opportunity to run up extra wins with it.

Players love having extra wilds show up on the reels because that means opportunities to get paid in a major way that they wouldn’t have received otherwise. With the Hot Rodded Stacked Wilds feature, you can randomly get a hot rod that runs across the reels after a non-free spin. When this happens, you’ll get a full stack of wilds on a reel, which means opportunities to get paid with multi-line wins in this all-ways format game.

Every single reel has the wild record symbol on it, and it shows up stacked on each reel as well. This wild is one of the most important symbols in the game because it gives you the opportunities for the biggest payoffs. Five of a kind earns 500 times your total bet, and you can get 50x for four as well. A win of 20x for three wilds is available too.

Something that’s worth pointing out is that you can get stacked wilds on the reels as a part of the locked reels feature. Imagine getting two, three, four or five reels that have wilds on them in this game with the 243-ways format, and it’s easy to see how you would run up a tremendous winning session in a single spin as a result.

In the Jukepot slot, the characters and symbols from the 1950s are the ones that give you the best payouts aside from the scatter and the wild. The man in the black leather jacket earns you a 400x win for five of a kind. Five of the woman in the red polka dotted shirt with her hair wrapped up in a purple bow gets you 300x. A 200x prize is also available for five of the hot rod car or five of the motorcycle. Finally, you’ll be able to pick up 100x for five of the electric guitar.

Neon signs really got their start in the 1950s, so it’s very fitting that NYX decided to use them for the card rank symbols in this game. The neon purple A symbol, the neon red K, the neon orange Q, the neon blue J and the neon hot yellow 10 all get you the same win for five of a kind. It’s 50x for five of any of these, and those are some pretty decent five of a kind wins considering you don’t have to line them up on specific paylines to get them.

With the Jukepot slot by NYX Gaming, you get a throwback to the 1950s with a ton of action. Every aspect of this game is set up to be all about a high hit-rate, and you get that through a combination of smart features, a balanced pay table and the 243-ways format. The hit-rate is high here, but the volatility is still up to a medium level because of how much value is tied up in the features, so it offers a style of gameplay that a lot of players will find reasonable. Overall, we think this is a particularly solid game, and it’s one of the more popular titles available through NYX’s software platform.