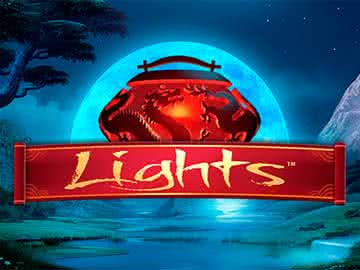 The Lights slot is a game powered by Net Entertainment that centers around wild features and an Asian lamp motif with relaxing gameplay.

Gameplay issues are a very important part of a software company’s overall offering of slots. Net Entertainment is a very good example of a company that produces many different games with different styles of play so that all players can find something they’re looking for. The Lights slot is centered around a relaxing and low-volatility approach that caters to players who just want to spend some time unwinding while they play a game they can really enjoy.

Format and Layout of the Lights Slot

There’s a lot to be excited about when it comes to the Lights online slot, but it all starts with a basic format with five reels and three rows. There are just nine paylines in this slot, which is definitely an older approach, but you can tell by the graphics and overall presentation that this is not an older game at all. Instead, the lower number of paylines is a part of the overall relaxing feel of this game.

Betting is pretty easy to manipulate so that you can pick out a bet size that works for you. Players can wager between one and ten coins on each of the paylines for a betting range of nine to 90 coins per spin. Since the coin values go from $0.01 to $1 apiece, that means the minimum bet size is $0.09. The maximum, along similar lines, is $90 per turn.

Wild symbols in this slot are handled a lot differently than probably any other game you’ve ever played. They do not get their own payouts, and they do not show up on the reels like the rest of the symbols do as parts of the symbol sets. Instead, they appear at random on every single spin. This means you’re getting at least two wild symbols on the reels on every spin, no matter what.

The way the floating wild symbol feature works is that fireflies are buzzing around the reels. Between two and four of the symbols on the game board will be turned wild by these fireflies on each spin. They substitute for all non-scatter symbols, and that’s a pretty good deal since they increase your hit-rate and decrease the volatility of the game as a whole.

The red and gold yin-yang symbol inside of a silver moon is the scattered bonus symbol in the Lights online slot. Instead of giving you payouts, however, it gives you free spins instead. The more scatters you get, the more free spins you earn.

You can pick up a set of 10 free spins for three scatters, or you can double that to 20 free turns if you’re able to land four scatters at once. Five scatter symbols gives you the maximum number of free spins with 30.

During these free spins, you don’t get multipliers, but you do get more wild symbols. Instead of having between two and four symbols turn wild like in the regular symbol, the floating wild symbols give you a minimum of three wilds on every single free spin, and you can actually earn up to six at a time. The free spins are clearly the place where you’ll have the most opportunities for multi-line payouts, but you’ll also have an easier time making the bigger wins as well.

An important part of this game’s overall feel is the fact that the pay table is extremely balanced while still giving you chances to win some pretty decent top prizes. There are five lamp symbols in different colors that make up the top half of the pay table, and it starts with the red dragon lamp and its 1,000x top jackpot win for a five-of-a-kind winning combination.

The orange lamp gets you a 750x win for five, and you can also earn 500x for five of the green. The blue lamp will let you earn 400x with five, and getting five of the purple lamp pays 300x. You’ll notice with these symbols that the “hotter” the color, the higher the payouts, and that’s an easy way to keep up with which payouts are the best for the lamps.

Net Entertainment used card rank symbols for the lowest symbols in this game, and normally that would be a little bit of a sign that they had been lazy. However, they’re not quite like other software developers, and here you can see that in a major way. All five of these symbols glow just like the lamps do, and that makes them fit in perfectly with the look and feel of the game. They do not feel “thrown together” in the least bit.

You’ll notice that some of the lowest five-of-a-kind winning combinations are pretty small. That’s made up for the fact that you get at least two wilds on every spin, which makes getting those payouts much easier. It’s also made up by the general fact that the hit-rate is so high in this slot as a whole.

The main thing to understand about the Lights video slot is that it’s created completely around a particular style of gameplay. This is a low-volatility, high hit-rate way of play that’s perfect for just relaxing while you enjoy yourself and your chances of winning. It’s not action-packed or set up for that type of experience at all.

If you are a fan of these types of games, then Lights will very easily become one of your favorites, but realize that it’s not necessarily for everyone at every point in time.

With the Lights online slot, Net Entertainment created a game that was aimed for a specific niche audience. A lot of players enjoy these types of games, even if it’s not all they play, so it definitely reached the group of people they were going for.

The floating wild feature in particular is a major part of the dynamic that this game creates. You’ll have more ways to win than what the nine payline layout seems to suggest because at least two wilds show up on each spin, and you can get as many as six on a spin inside of the free spins feature thanks to these fireflies. Overall, the game looks great, and it’s one of the most popular titles to ever be released in the low-volatility, relaxation-focused sub-genre.