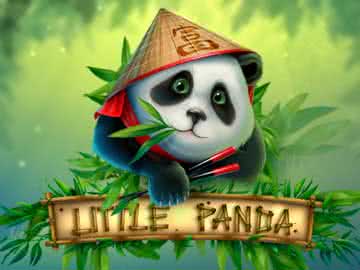 The Little Panda video slot by Endorphina uses a beautiful Asian forest theme with lots of bamboo along with pandas, butterflies, flowers and other gorgeous symbols. Gameplay has five reels, four rows and 1,024 ways to win for a low volatility and a very high hit-rate.

Whenever an online slot is developed, it has two main components: gameplay and graphics. The visual appeal is important because of how it can make the player feel, and this includes the theme. The gameplay is critical as well because that drastically affects the tone of the game and what the overall experience is like. With the Little Panda video slot by Endorphina, you get a very solid and cohesive combination of these two aspects of the equation.

You’ll find that the gameplay centers around a very high hit-rate and a low volatility with chances to win some pretty good prizes. The graphics are also strong with a bamboo forest theme and lots of pandas on the reels.

Format and Layout of the Little Panda Slot

The base layout for this game is centered around making it pretty much as easy as possible to get winning combinations. There are five reels and four rows of symbols, and since this game uses the “all ways” format, you’ll have 1,024 different ways to win on every single turn. To get winning combinations in this game, paylines aren’t used. Instead, you can get matching symbols on consecutive reels (from left to right) no matter where those matching symbols appear on those reels. 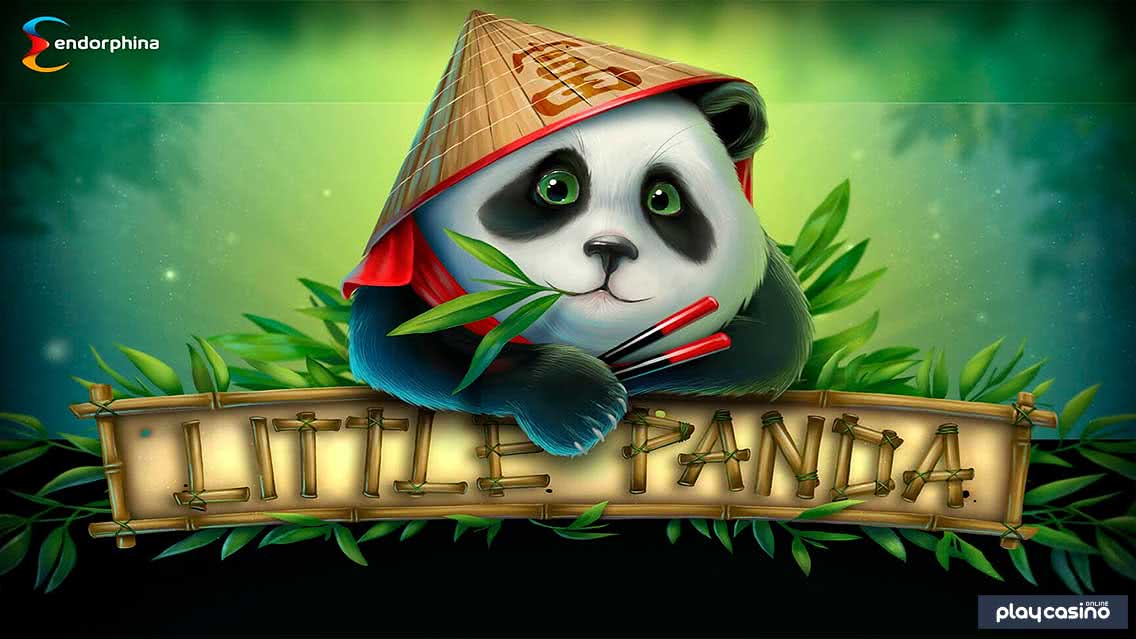 To simplify the betting, you’ll have an option to wager 40, 200 or 400 coins per turn. You have a number of options for the specific coin sizes being used that will allow you to customize your bet size further. 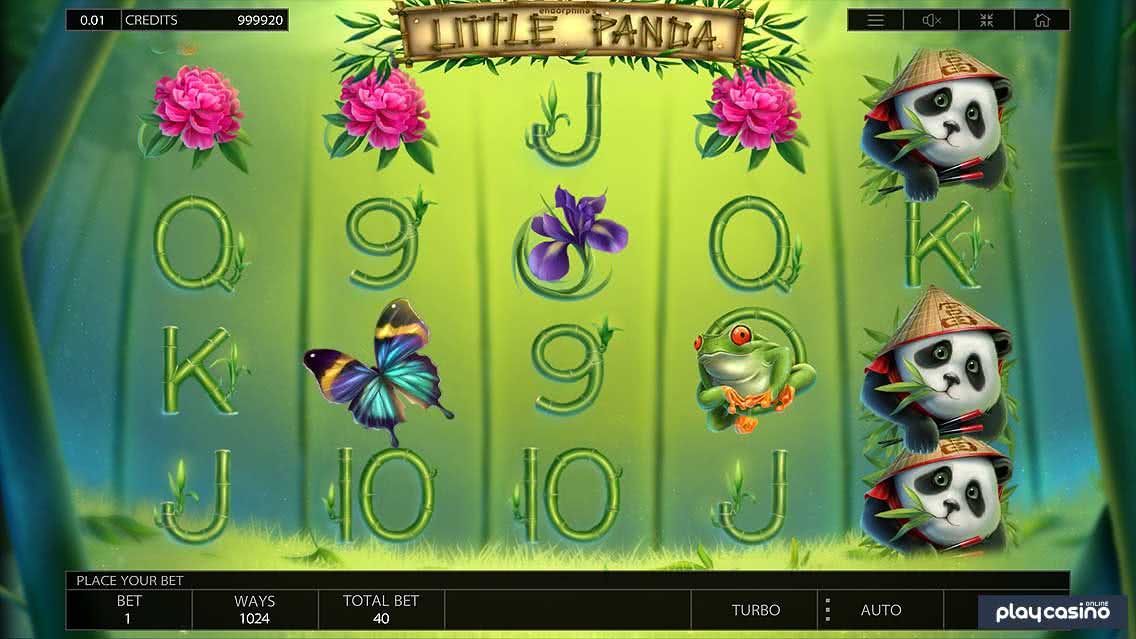 There’s a black and white yin-yang symbol surrounded in a bamboo outline, and it’s the scatter in this game. While all normal symbols act as left-to-right scatters in this slot, this particular symbol acts like a normal scatter and will give you payouts regardless of where it appears. It’s also the highest-paying symbol in the game, and it will give you 800x for five of a kind. You can pick up 400x for four of the yin-yang anywhere on the game board, and just three still pays out a solid 80x, even if none of them are on adjacent reels. There’s a lot of value tied up in this symbol as a result of its strong payouts and the fact that it’s the only true scatter symbol in the game as a whole. 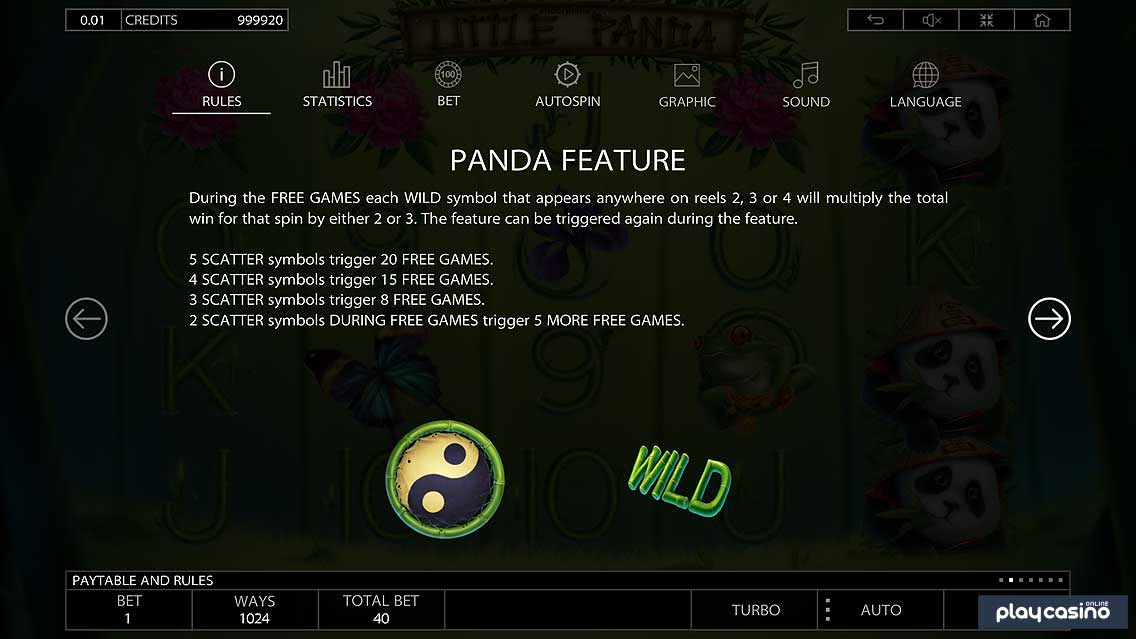 Endorphina made it really easy to spot the wild symbol in the Little Panda online slot because it spells out “WILD” in bamboo letters. This wild symbol will show up on the second, third and fourth reels in this game, and it does not substitute for the scatter. With the 1,024 ways format, the wilds are particularly important and make it really easy to get more wins than you would have otherwise because they don’t have to show up on specific paylines. Just one wild on the reels makes it so that you only need to line up four symbols for a five-of-a-kind combination, just to give an idea of how important they become. 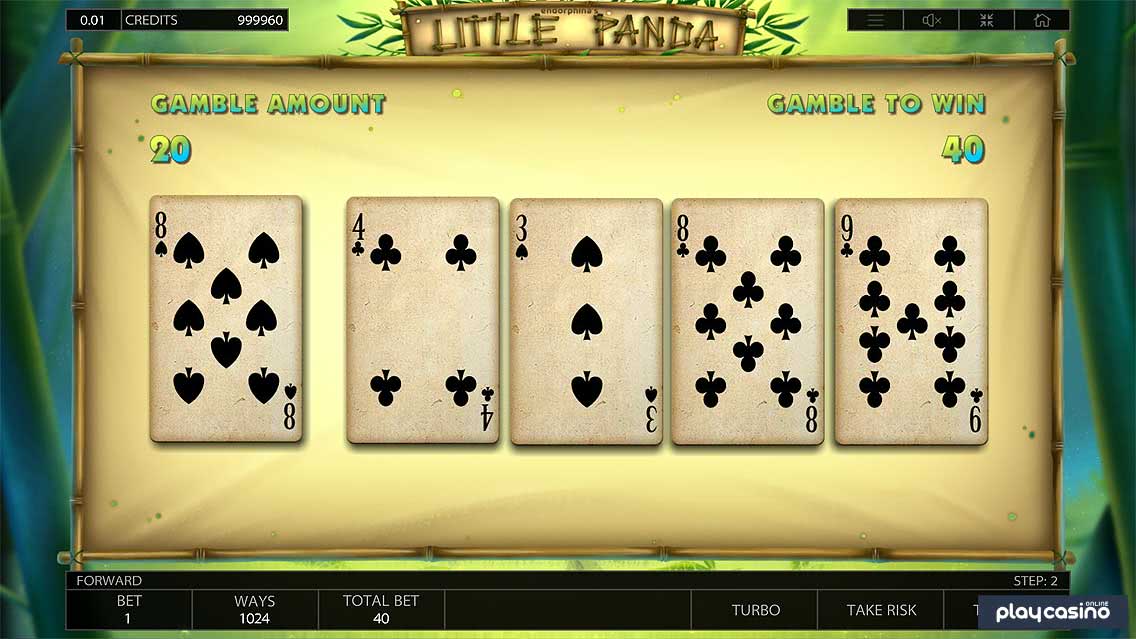 On top of that, just two yin-yangs during the free spins mode will give you an additional five free spins as an extra bonus just to make it easier to extend the length of the Panda Feature. This is a nice addition that we think many other games would benefit by having.

During these free spins, the wilds become wild multipliers. They will multiply any winning combination they are a part of by a factor of 2x or 3x, chosen at random. It’s clear to see that this adds even more value to what was already a strong feature. 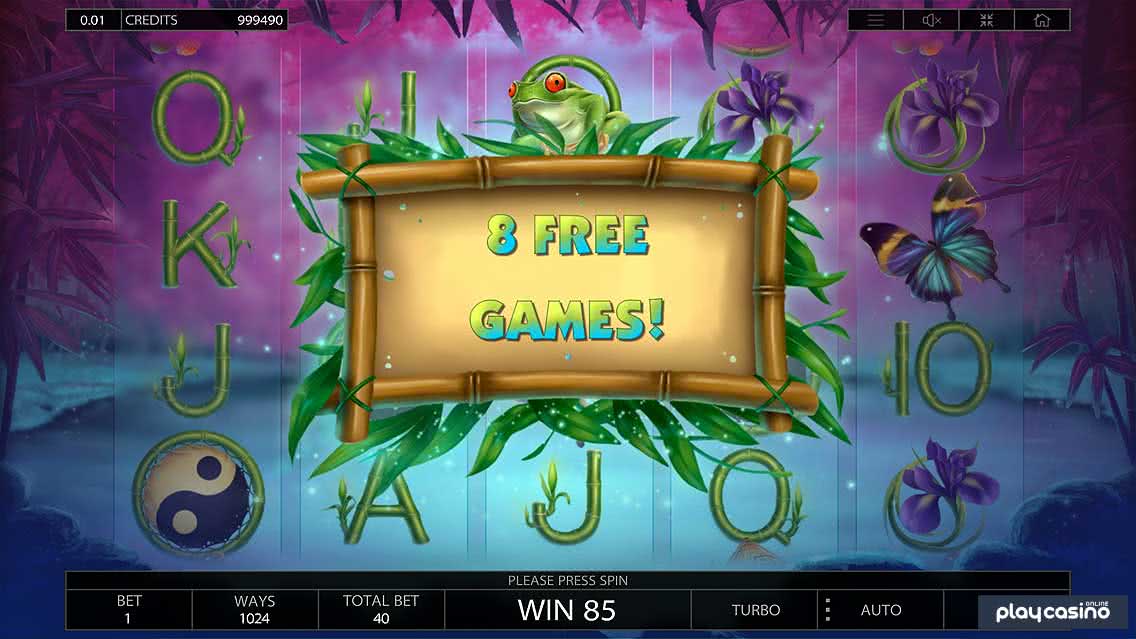 The Little Panda online slot has five symbols that make up the higher level of wins, aside from the yin-yang. The panda is the highest-paying normal symbol in the game, which probably isn’t surprising considering the name of the slot. It’ll get you 300x for five of a kind. Something important to note is that the panda pays for two of a kind or more, and it’s the only high-end symbol to do so.

The frog symbol and the butterfly will each give you a 150x win if you line up at least one on each payline. You can pick up 120x for five of a kind combos of the purple flower or of the pink flower as well. 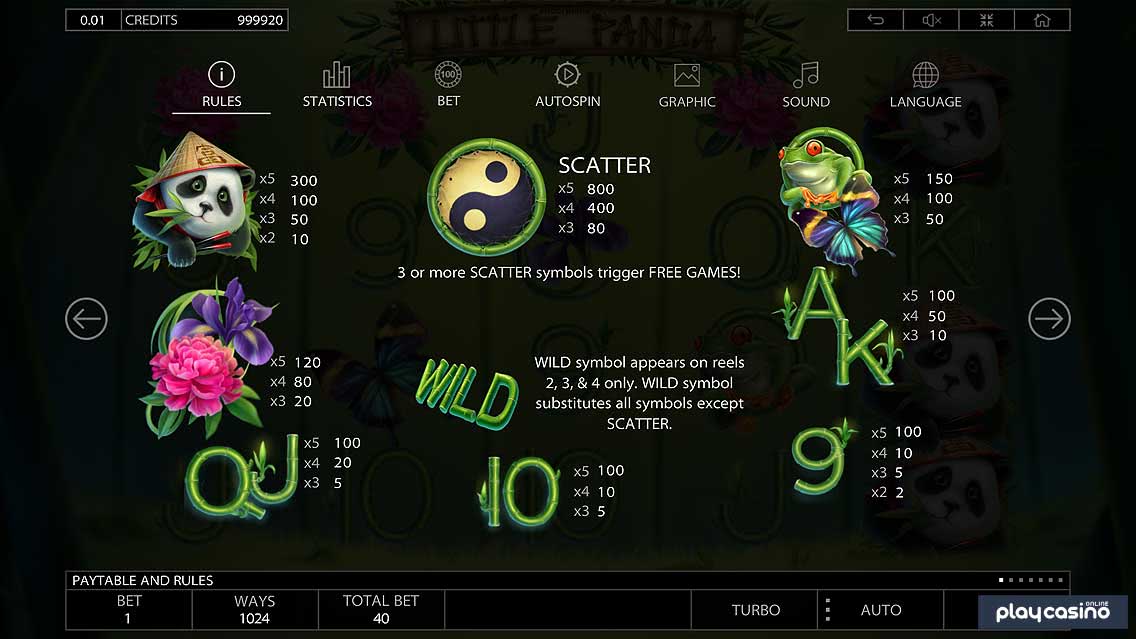 Playing on the bamboo motif, you’ll find six different lower-level symbols that are all card ranks spelled out in bamboo letters. We think this was fairly clever, and it’s a rare occasion where the card rank symbols were probably a really good idea for a game since they’re more typically used out of what seems to be laziness and sticking to convention instead of it being because they’re a solid fit.

All six of these symbols for the A, K, Q, J, 10 and 9 will give you a 100x win for five of a kind, though their lower payouts vary a bit. However, the 9 is somewhat special because it’s the only card rank symbol that gives you a win for only two of a kind.

With the Little Panda video slot, you get to see that Endorphina has a lot of different titles in their portfolio that cater to a variety of different play styles. This game in particular has a very high hit-rate, a particularly low volatility and a relaxing atmosphere. There is one really good feature, but the game itself is not exactly feature-based. As a result some players will love this game, and others will want to try something else.

However, that’s the beauty of this game as a part of Endorphina’s overall portfolio. They offer different types of games for different types of players, and you get to see that there’s still a sizable audience for this particular game. Overall, it’s a solid game in and of itself, but understanding where it falls in with their game selection as a whole makes it even easier to appreciate.