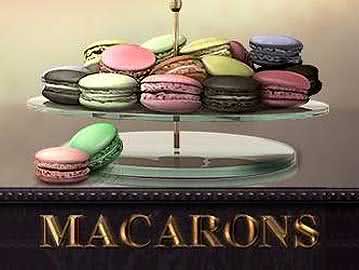 The Macarons video slot by Endorphina centers around the dessert by the same name with an in-depth French romance theme. There are 10 paylines of action in this game with stacked wild symbols, a free spins mode with multipliers and a 5,000x top jackpot.

Endorphina’s treatment of their Macarons online slot is a solid example of them using one aspect of a complicated theme as the centerpiece of an entire game. You’ll see the titular desserts all over the game in the symbol set and the background, but the game itself actually revolves around a French Romance theme, and you’ll see the couple involved on the reels. The gameplay has a bit more of an exciting theme along these lines, and this includes the gameplay as well. Big top payouts and value-packed features are the order of the day, and the gorgeous graphics and strong visual appeal are just icing on top.

Format and Layout of the Macarons Slot

To provide players with sufficient action without the number of ways to win getting out of hand, you’ll find that there are five vertical reels, three horizontal rows and 10 paylines that go from left to right only in this game. Players can play with fewer than 10 lines by clicking the numbers to the left or right of the game’s reels, but be warned that this drops down the return to player percentage, which in turn means lower chances of winning after any given session, even if you wager the same amount total over time. 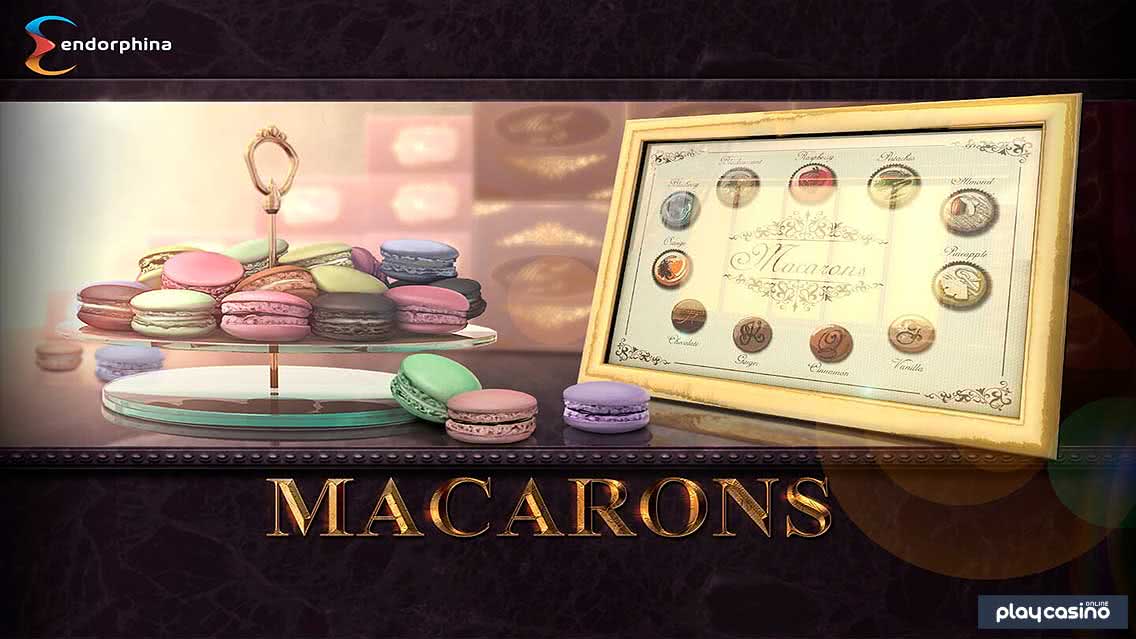 Players will get plenty of available bet sizes, even with all 10 of the available paylines activated. It starts with having up to 10 coins on each payline from the total bet control in the bottom-left corner of the game. It continues with individual coin size control in the top-left corner of this slot, and those coin values start at $0.01 at the minimum. They go all the way up to $1 apiece, and that allows for bets that go from $0.10 to $100 per turn. Players can get a bet size that works for them no matter what stakes they want to focus on. 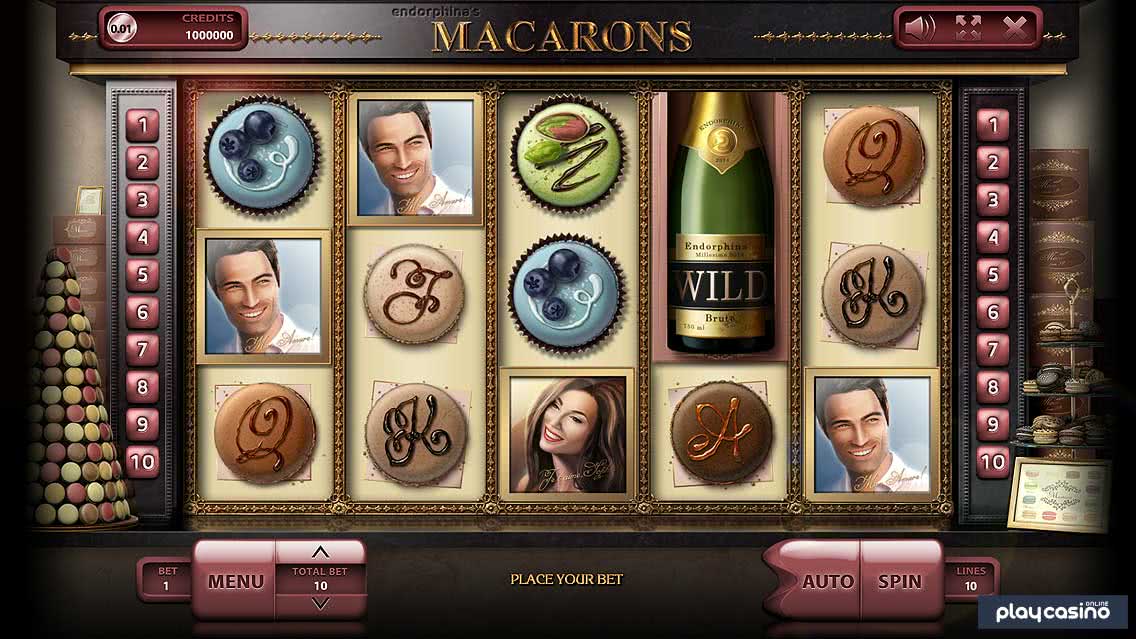 A bottle of champagne is known for being a big symbol of celebration, and you’ll definitely be celebrating when you get it on the reels of the Macarons video slot. This bottle is the wild symbol in this game, and fitting to the size and shape of it, this wild also shows up stacked. It appears stacked three symbols high, and that means it can end up covering an entire reel. This symbol substitutes for everything but the scattered bonus symbol, and it can really help to get multiple payouts on a single spin, especially if you get more than one on the reels at once. This wild does not get its own payouts, however.

There is a bonus symbol that’s a golden seal, and it acts as a scatter. It gives you payouts as noted below, but it also takes you to a free spins bonus round. This scattered bonus symbol appears on all five reels in the Macarons online slot, and you only need three anywhere on the reels to trigger the bonus feature. This feature is centered around free spins, as you might have guessed.

You’ll start out with 20 free spins in your total no matter how many scatters it took to trigger the feature. From there, you’ll have a 4x multiplier for every single one of your wins. This allows for some pretty enormous payouts. What’s even more interesting about this feature is that you can pick up an additional 20 free spins by getting at least three scatters on the reels again, so there’s a tremendous amount of value in the ability to re-trigger this set of free spins. 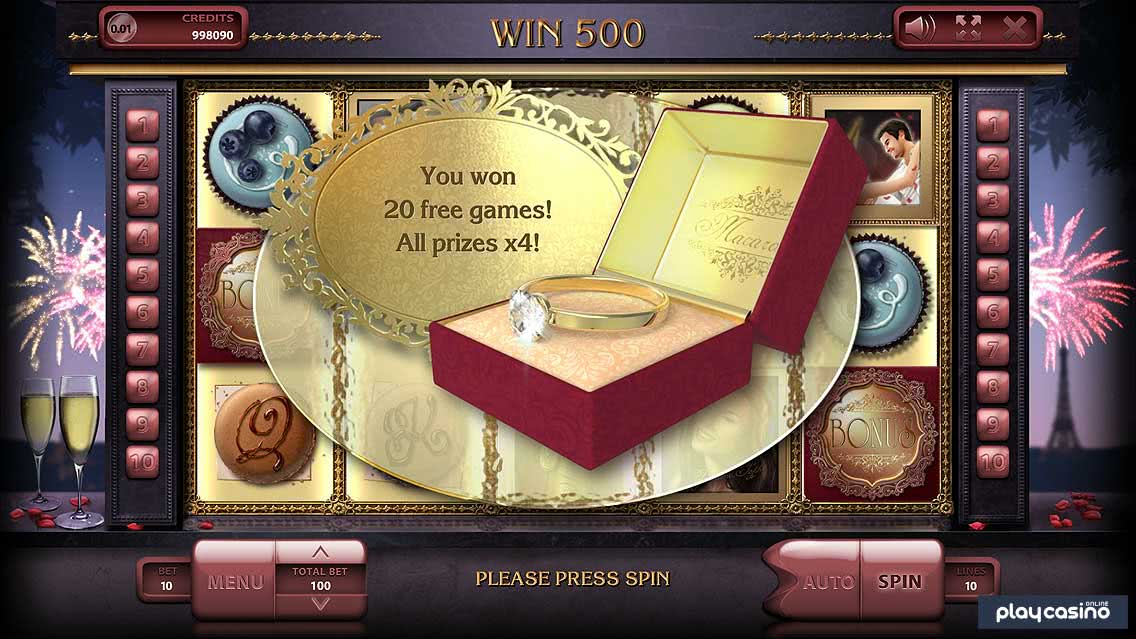 Aside from giving you access to a bonus feature, the golden seal is also one of the two symbols that can give you the largest regular prize in the game. Five of a kind, whether they’re on a payline or not, gets you a 5,000x jackpot. You can multiply this by four for a total of 20,000x in the free spins mode as well, which is obviously an enormous payout. Wins of 400x for four of a kind and 50x for three of a kind are also available. Even though just two of this symbol anywhere on the game board will not give you a set of free spins, you can still earn 20x in the process. 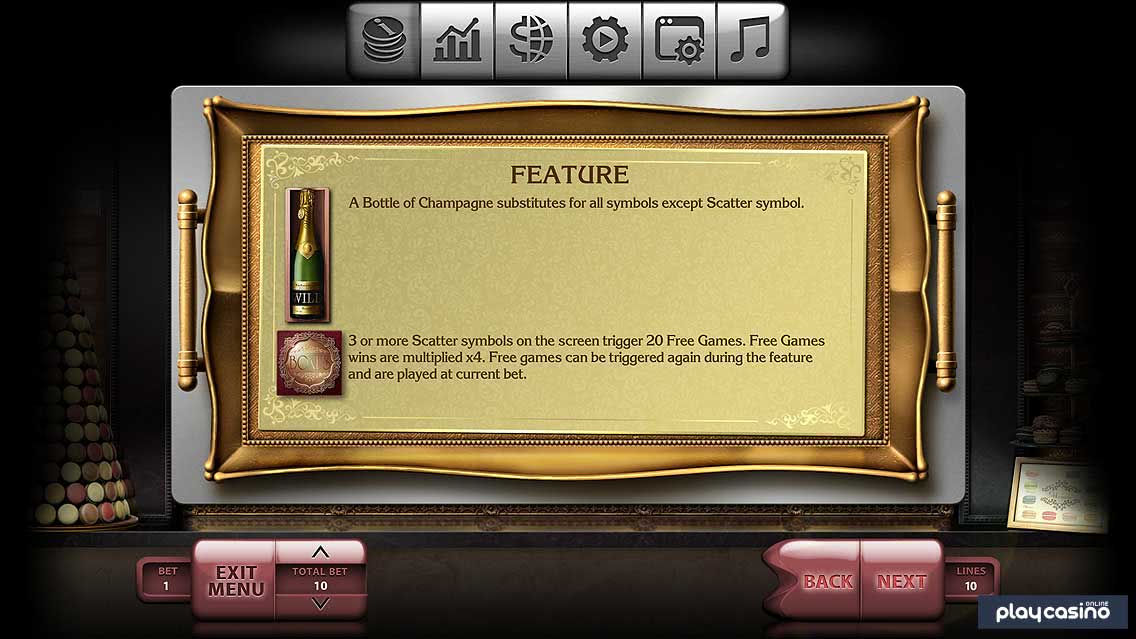 There are three character symbols that consist of two characters. The top symbol is the one with both the man and the woman dancing in front of the Eiffel Tower. This symbol pays 5,000x for five in the Macarons online slot. Either the man or the woman alone and smiling gets you 1,000x for five as a secondary jackpot. We want to point out that the individual character symbols require three of a kind or more for a payout. However, the one with the couple together is like the scatter in that it only requires two. 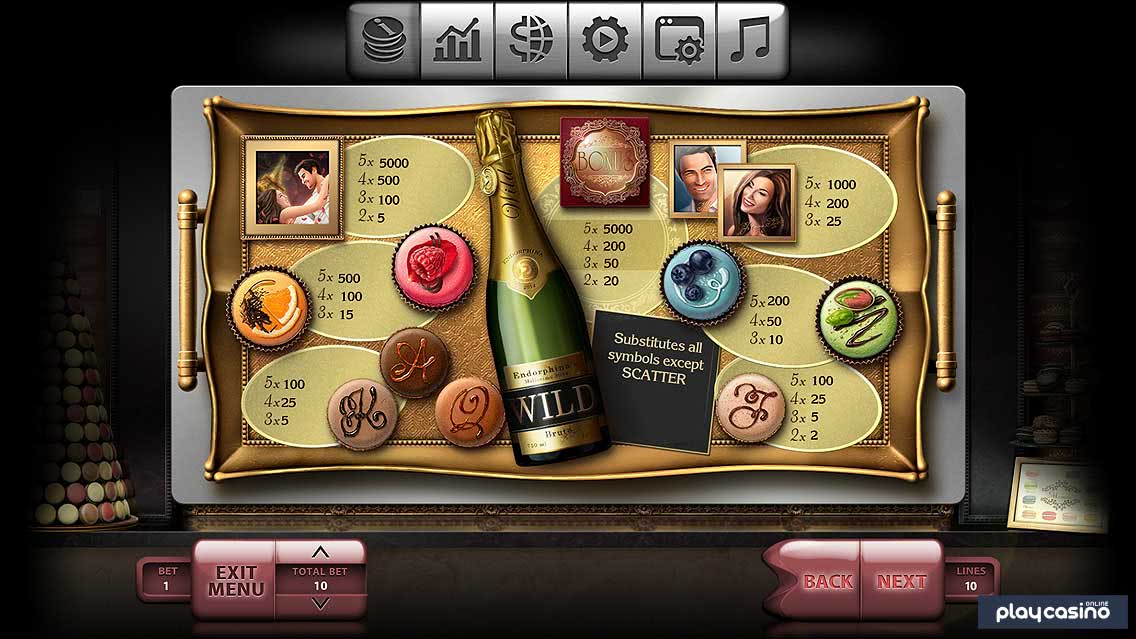 With the Macarons video slot, players are getting a theme that’s very much off of the beaten path from what you typically see in online slots. By basing the visual motif around a specific dessert while still maintaining the romantic aspect of the theme, they’ve put themselves in a position to show off the visual stylings they have become known for with the deserts all over the reels.

They’ve also done this without sacrificing gameplay, which is a pretty important aspect of the overall experience for a game like this. The feature set is strong, but it’s also fairly simple and easy to understand without a ton of “moving parts” that can be difficult to keep up with. There are some jackpot-sized wins available as well, and this is definitely a game for players who don’t mind some realtively serious levels of swings. As such, we recommend that players slow down and play with somewhat smaller bet sizes then maybe they are typically used to.