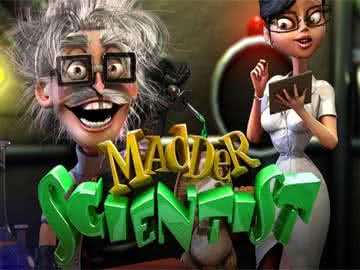 The Madder Scientist video slot is a title produced by BetSoft that centers around a high-tech lab with lots of features crammed into 30 paylines of action and multiple bonus rounds.

One of the archetypes that we have as a part of our global culture is the idea of a scientist who has went a little off of his rocker and is perhaps trying to create something that he shouldn’t. The Madder Scientist online slot is a game developed by BetSoft that takes this theme to its logical and hilarious conclusion. There are a number of characters in this game presented in aesthetically pleasing 3D graphics, and everything is designed to really bring out the importance and fun of the bonus features on the gameplay side of things. As a result, players have a medium-volatility experience that’s exciting and a ton of fun while you try to do crazy things on the reels with the scientist as he fiddles with some chemicals at the bottom of the screen and cheers you on.

Format and Layout of the Madder Scientist Slot

A total of 30 paylines are found in this game. They are distributed across five reels and with three horizontal rows of symbols. What you’ll notice is that you do have the ability to select how many lines you want to play with thanks to the blue beaker at the bottom of the screen. However, it’s best to keep it at 30. Players who use fewer than 30 lines will be subject to a lower return to player percentage, and that means worse payouts on average during the course of your sessions. 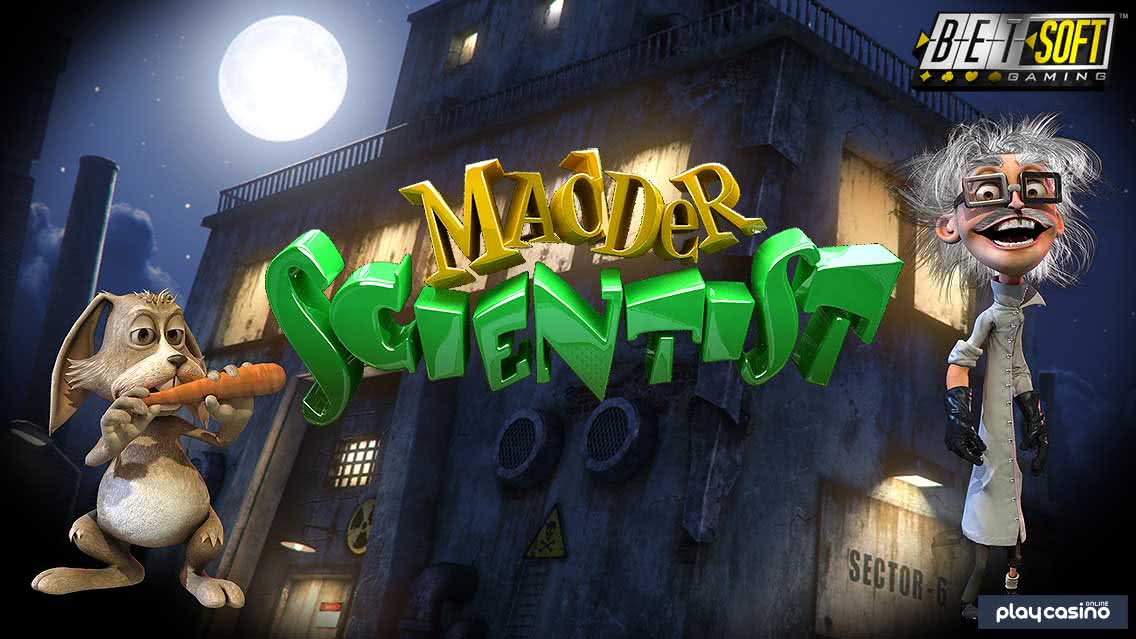 Something we really like about this title is that there are two different controls for adjusting how much you’re wagering. Combined, they make it easier to really zero in on the exact price per spin that you want to play for. The first is with the bet per line, and that’s adjusted with the green beaker in the center of the bottom of the reels. One to five coins per payline are your options. At the bottom-right of the screen, there is a gold box that you can click to change the coin sizes, and your options there run from $0.01 to $1 apiece. 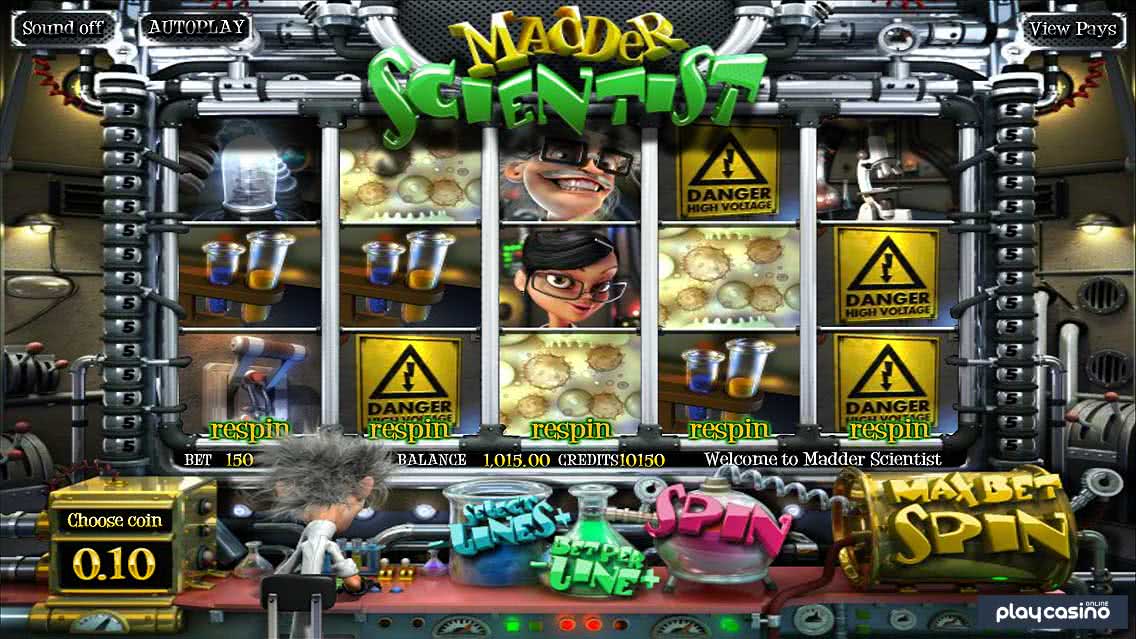 One of the main bonus features in the Madder Scientist online slot centers around the giant carrot symbol. If you get three of them on the game board, no matter which reels or positions, then you trigger the carrot bonus feature. The idea here is that you’re going to help the scientist to mix up some chemicals to grow the largest carrot you can. The bigger the mutant carrot, the better the payouts you get. 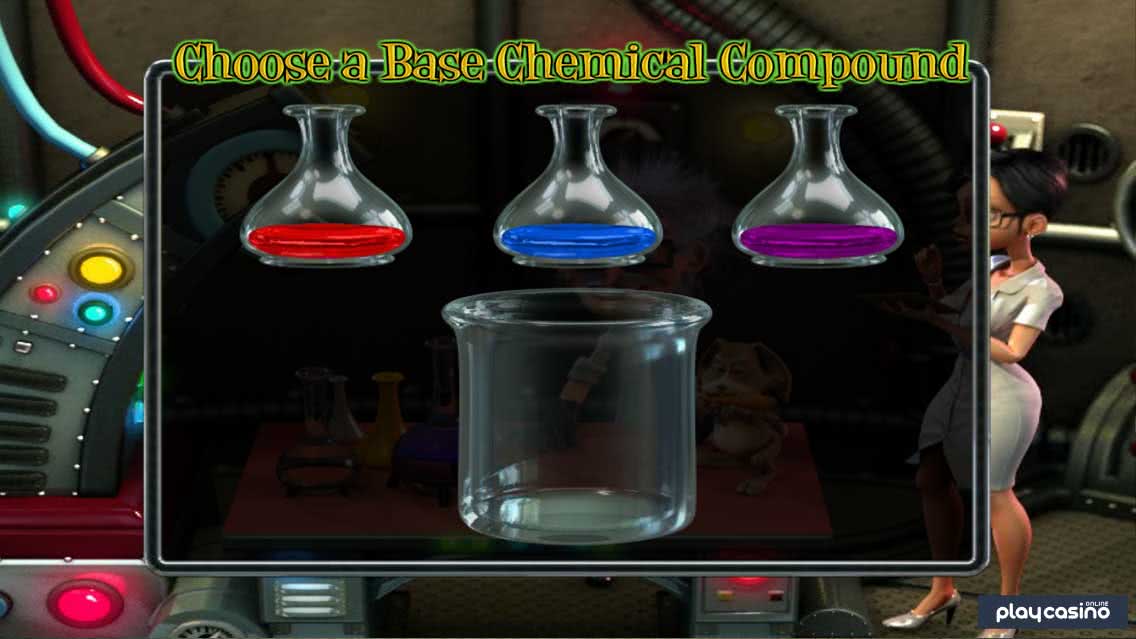 This is a very interactive feature that fits the theme extremely well, and it’s the kind of thing that gives this title the level of cohesiveness in gameplay that has made it so popular for so long. 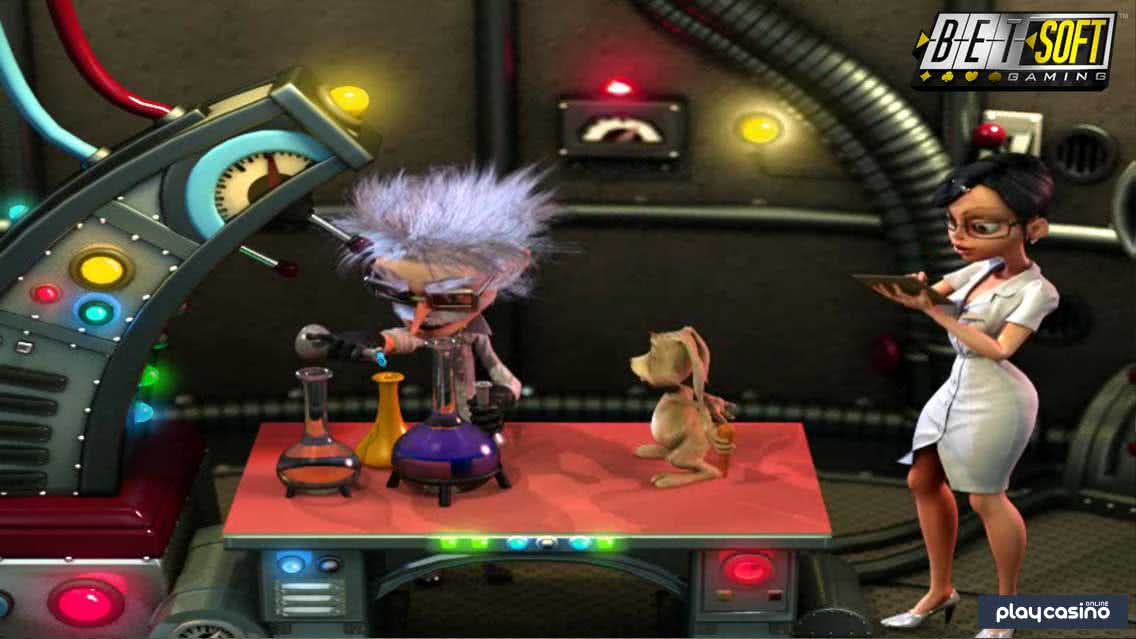 In the Madder Scientist video slot, a feature that stands out in a big way is the reel re-spin feature because it works differently than most re-spin features that players have probably experienced. After each and every spin, you have an opportunity to re-spin any of the reels. However, there is a cost associated with doing so, and it’s calculated on the fly and shown to you when you hover over the reel after a given spin. You can completely ignore this feature if you want for more traditional gameplay, or you can take your shot at these re-spins to try to hit big payouts that you missed by one symbol or something similar. 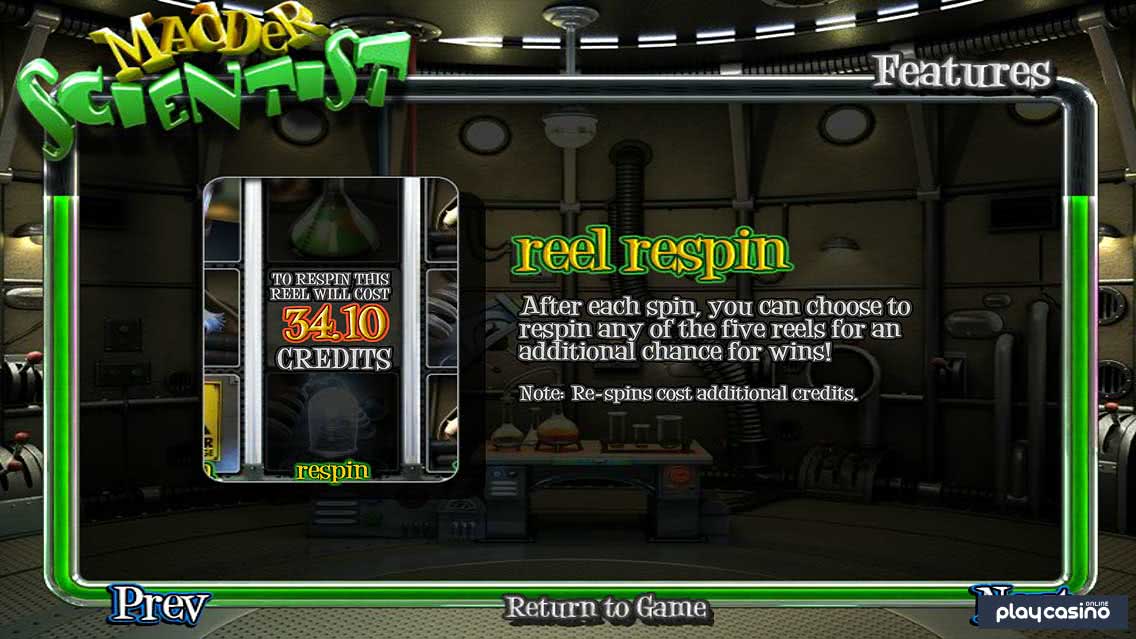 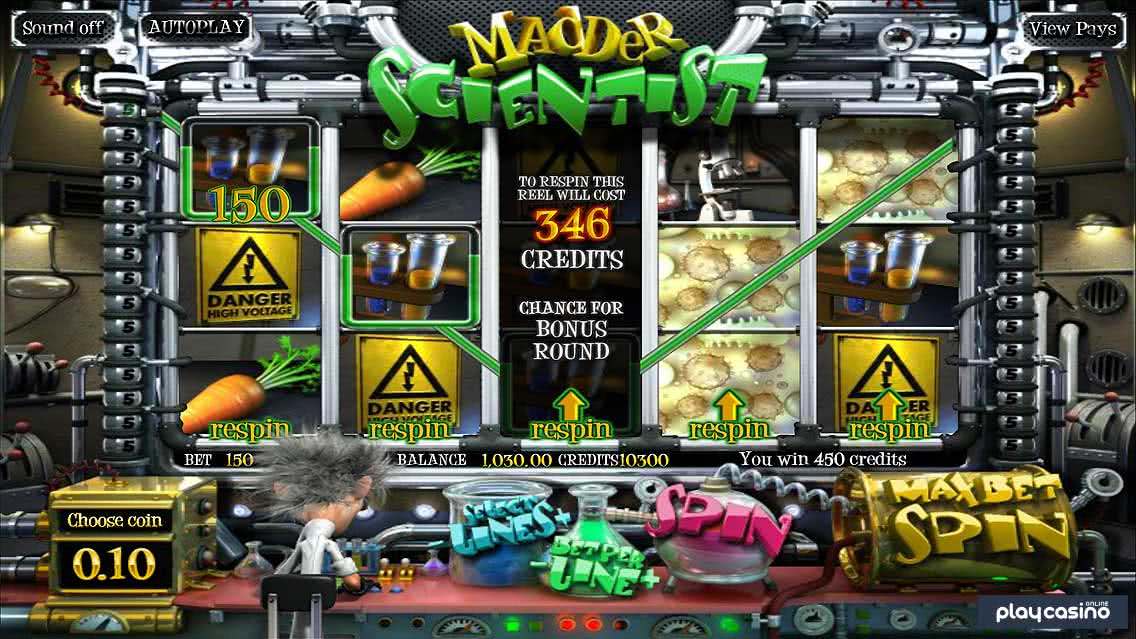 On the first, third and fifth reels, you’ll find that green beaker symbols make an appearance. To get the Madder Scientist online slot’s beaker feature, you’ll need to pick up all three on the same spin. When this happens, you’re going to be able to pick from those beakers to uncover instant wins. You can keep picking beakers to rack up bigger and bigger prizes until you get the “collect” symbol from clicking. At that point, all of your beaker winnings are added up and made a part of your account balance. 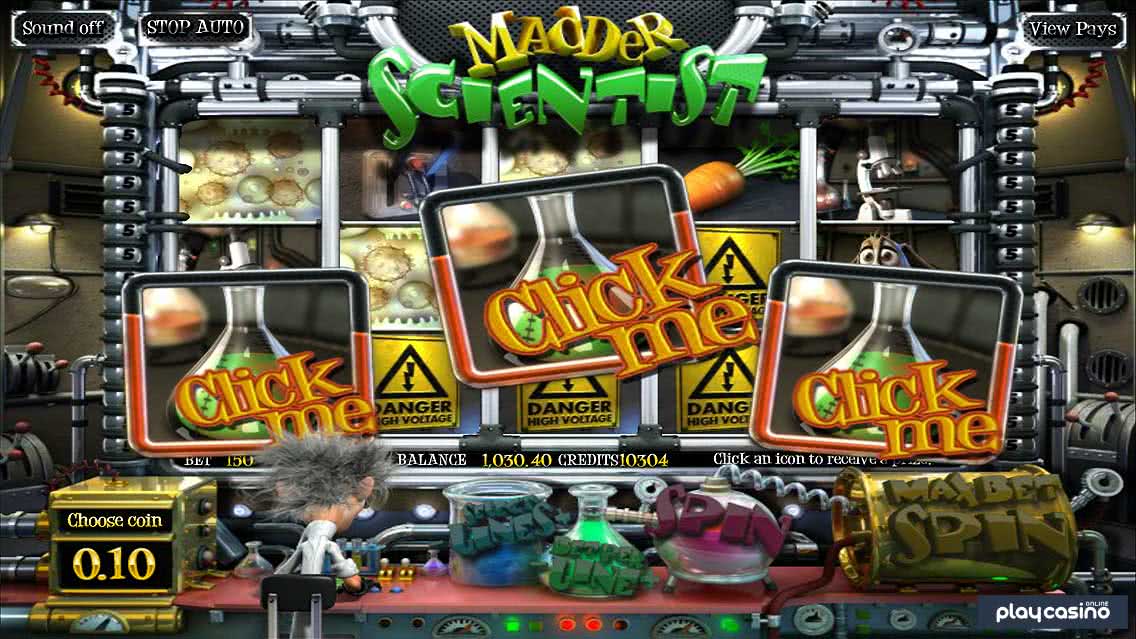 The switch symbols are scattered as well, and if you get three of them on the reels in this game all at the same time, then you’ll trigger a very important wild feature. One of the five reels will be chosen at random, and it will be completely wild for several spins in a row. The amount of value that you get from this feature cannot be understated because it makes it so much easier to hit winning combinations, especially if it comes on one of the first three reels. When that happens, three of a kind combinations only require two symbols, which is much, much easier to get, and your hit-rate increases tremendously for all of those turns with the wild reel in place. 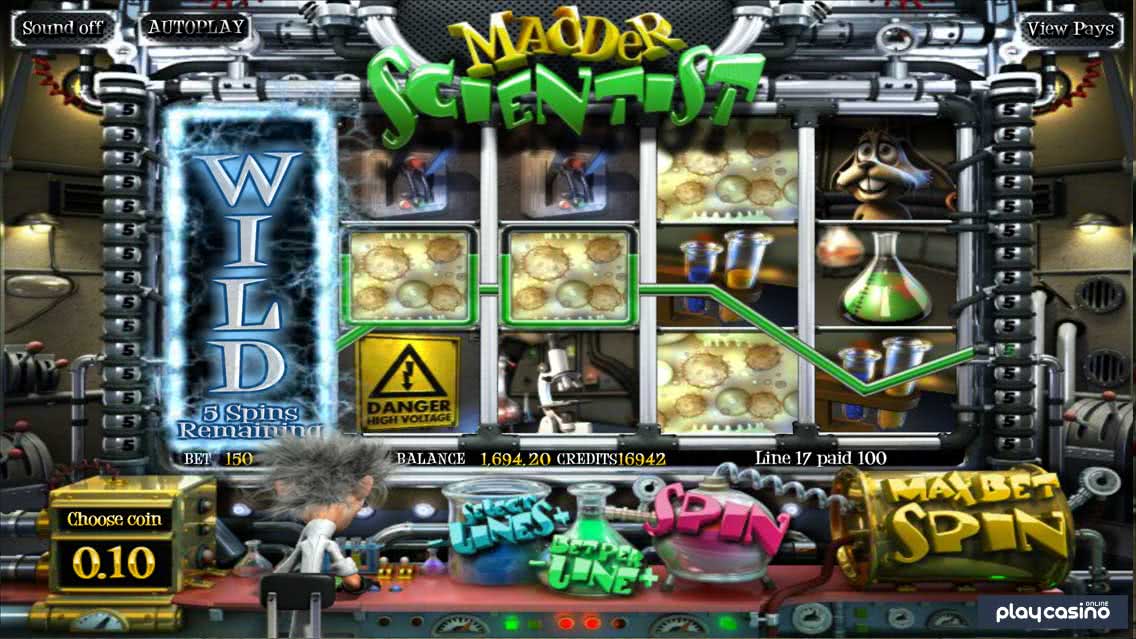 In the Madder Scientist online slot, you’re probably not going to be surprised that the scientist himself is the top-paying symbol. You’ll get a 500x top prize for five of a kind of this crazy guy on a payline. Five of his lovely assistant in the glasses with black hair will earn 500x as well, so there’s some level of equality in the workplace going on in his lab.

Slightly stepping down from that is a 400x prize for five of the dog, who looks pretty scared as if he doesn’t know what crazy stuff they’re going to do next. You can also earn 300x for five of the flashing lights. All four of these symbols reward players with wins for just two of a kind or more on a payline. 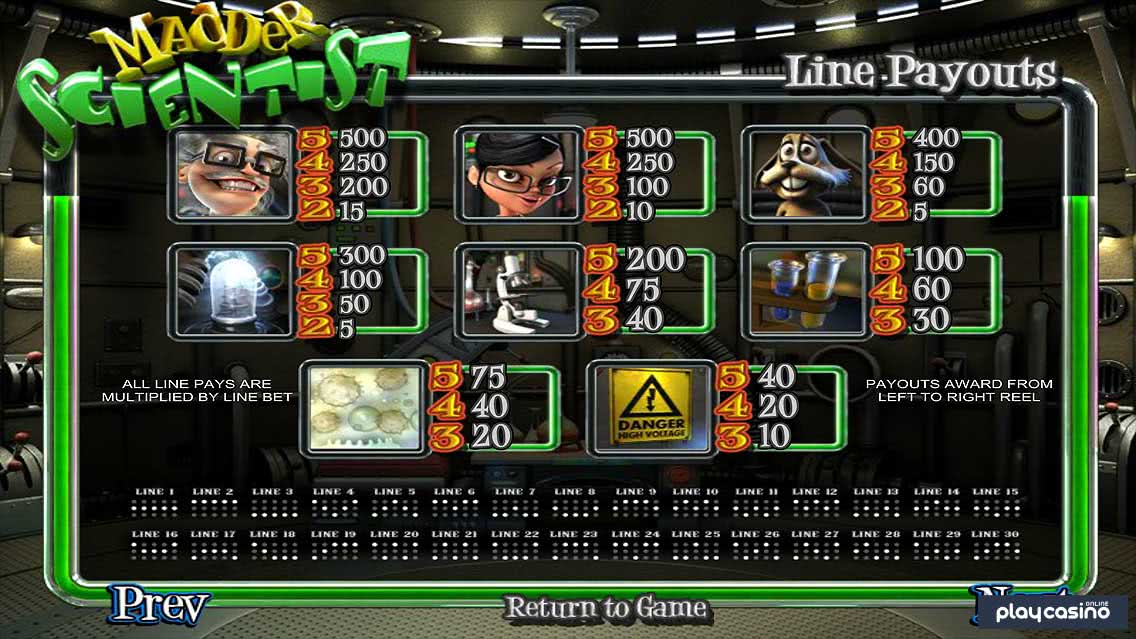 Lots of themes in the online slots industry get used over and over again. What BetSoft has done with the Madder Scientist video slot is come up with a theme that hasn’t been used all that much and then put their own unique twist on things so that it would be difficult to duplicate in the first place. That’s the sort of thing that makes a game like this stand out and that makes players want to come back for more repeatedly.