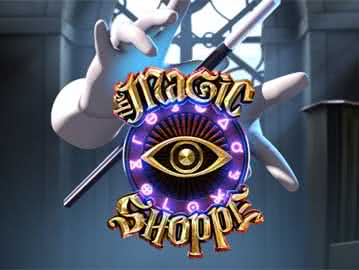 The Magic Shoppe video slot by BetSoft is based completely around stage magic, and it uses 25 paylines with multiple styles of free spins to give players big opportunities for guaranteed wins. There’s also a magic wand feature that adds another layer of value on top of that.

Stage magic is something that has enterained people in one form or another for centuries. People from all over would come to see what a particular magician or illusionist could do right in front of their eyes, and the Magic Shoppe online slot by BetSoft captures that theme pretty well. There are all kinds of symbols from the world of stage magic, and you’ll find that the multiple styles of features layer together very well just like a set of magic tricks would during an incredible performance. With the medium-high volatility and chances to win some pretty large prizes, this is a game that will give you some exciting swings.

Format and Layout of the Magic Shoppe Slot

This game has a pretty standard layout with five reels, three rows and 25 paylines. It’s all about giving you a solid foundation on which you can try to make some magic for your account balance. You will not be able to change how many paylines you’re playing with, which is good since you wouldn’t be changing them anyway, and you can bet as many as five coins on each of the paylines. This gives players options to wager 25, 50, 75, 100 or 125 coins per turn. The coin values go from $0.01 to $1 apiece, so the overall betting range is $0.25 to $125 per turn, which is pretty wide. 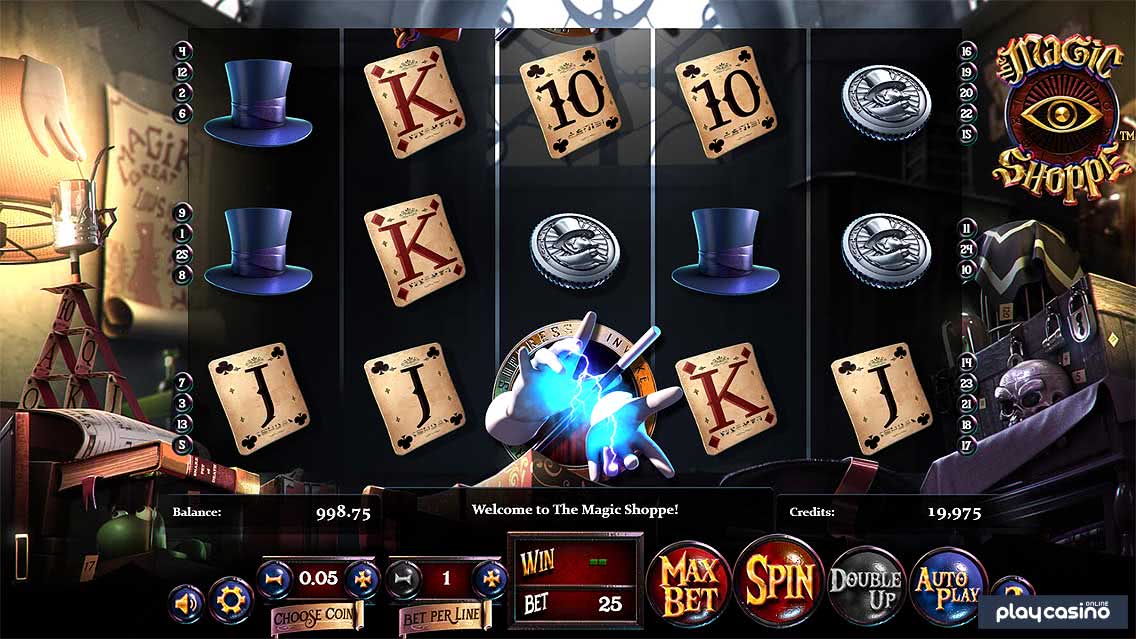 There are two different scattered bonus symbols in this game. They both look like gift boxes with chains and a padlock wrapped around them, but the red ones are the sun boxes, and the blue ones are the moon boxes. Three, four or five of one of these boxes will give you three, six or 12 total free spins in the particular style of that box: either sun spins or moon spins.

During the spins of either of these free modes, every single spin guarantees either an additional feature activation or a win on the reels. As you can see, up to 12 guaranteed wins in a free spins mode is a lot to get excited about, and that’s exactly the kind of magic trick that players are hoping to see when they’re playing a game like the Magic Shoppe video slot. 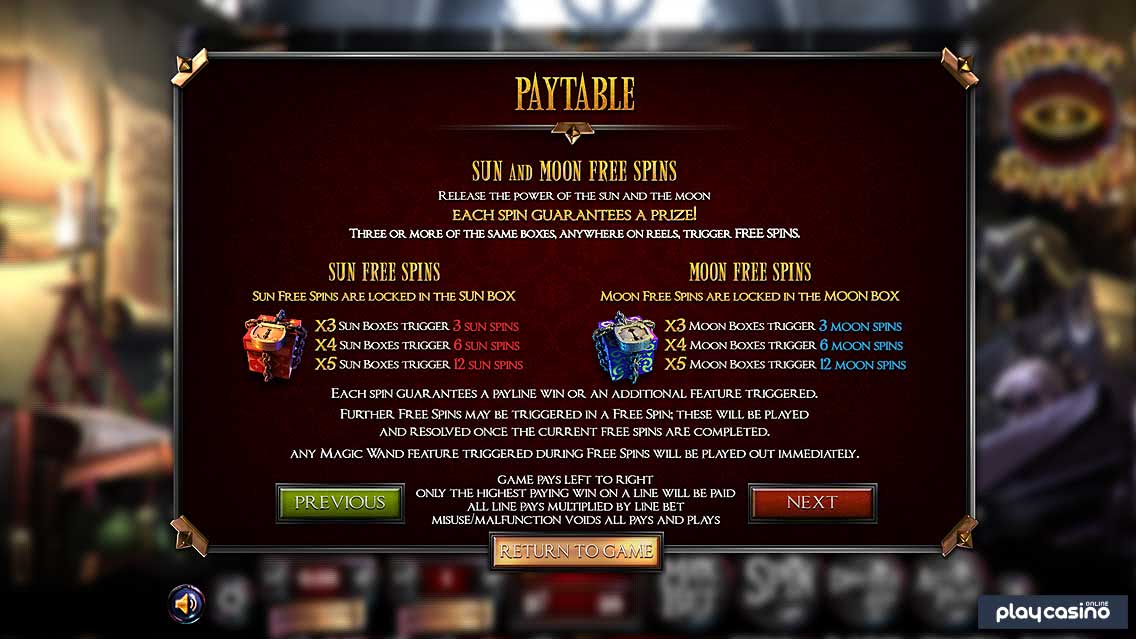 There’s a symbol with two hands in gloves doing a trick with a magic wand, and if you get three or more during either the free spins or the regular mode, you’ll trigger the Magic Wand Feature. The key behind this feature is that it’ll give you extra wilds in the form of all of the magic wand symbols, all of the moon boxes and all of the sun boxes on the screen. The magic wand symbols do not have to be in any particular position or on any particular payline to trigger this feature. 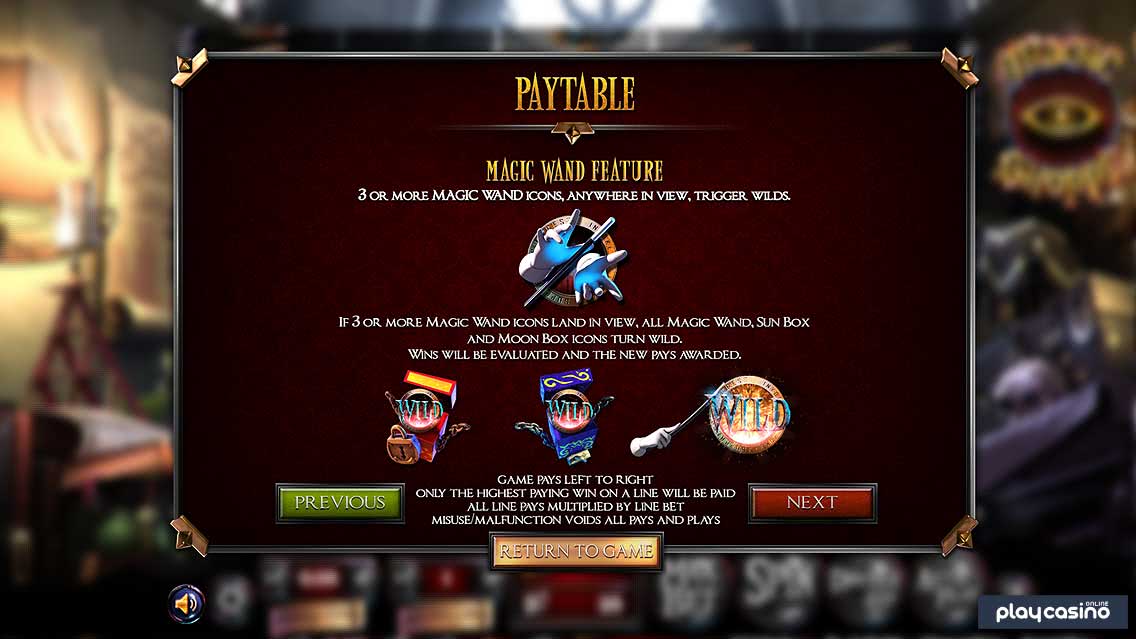 With chances to pick up so many wild symbols on the same spin with the Magic Wand feature, it’s important to realize that the wild symbols themselves are responsible for the largest regular payouts in the whole game. In the Magic Shoppe online slot, five wilds on a payline will give you a strong 2,400x win. Four of a kind is worth 1,200x, and you can get 800x for three.

They substitute for everything but the moon boxes, the sun boxes and the magic wand symbols in this slot. That means they’re a pretty good deal because they help you to win with everything else that this game has available.

Five other symbols make up the high-value portion of the pay table. This starts off with the skull icon, and it can give you a 1,000x win for five of a kind, 500x for four and 300x for three. The handcuffs come in next at the 800x level for five, but four-of-a-kind and three-of-a-kind combinations are still good for 400x and 200x, respectively.

The label knives are next in line, and they award a stron g500x for five. You can also earn 400x for five of the silver coin, and a 200x win is yours when five of the top hat symbols are lined up on a payline. The key behind these payouts is to recognize that there are some pretty large wins, but there’s not a huge drop from any one payout level to the next, and that helps to create a balanced pay table within a medium-high volatility game. 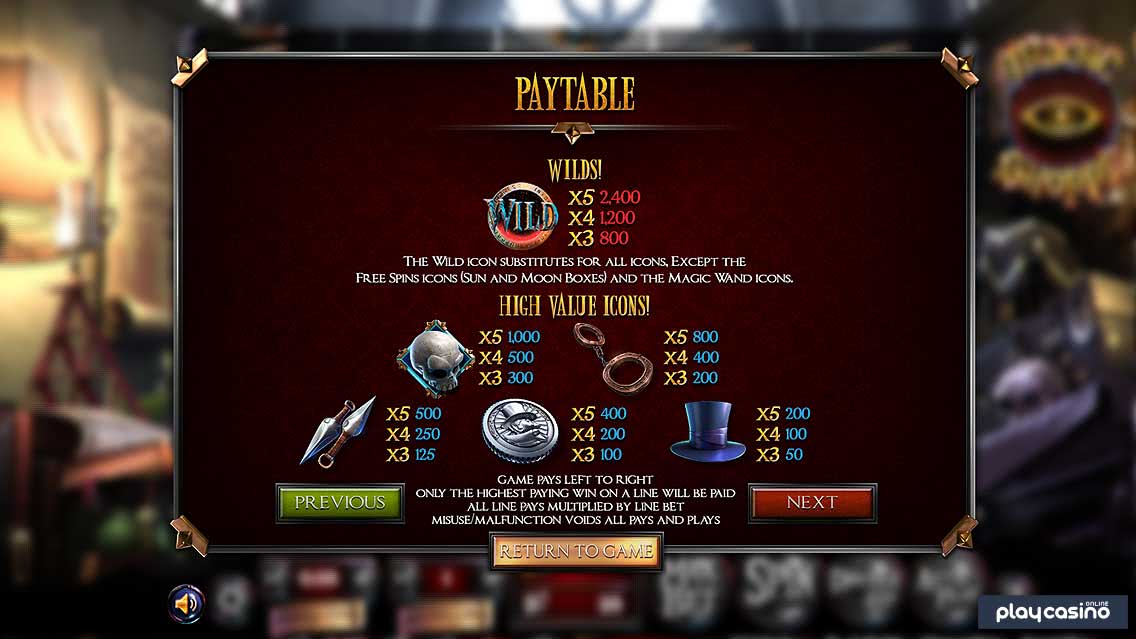 Many games use card rank symbols just as a standard for their low-level payouts. However, in the Magic Shoppe online slot, they actually appear on playing cards since a lot of stage magic uses these cards for tricks. These payouts are no tricks, however, and they give you some pretty decent wins. 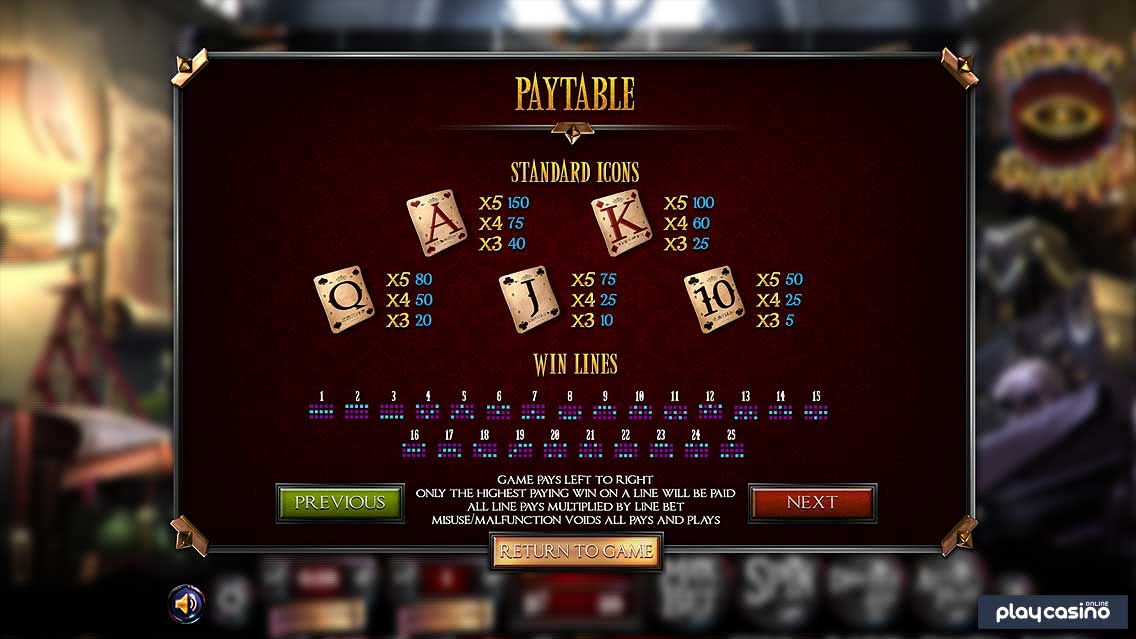 A lot of games also use double up features, but BetSoft has made theirs a bit different than most. Instead of being forced into playing for double-or-nothing with your entire win on any given spin, you have the option of only wagering half of it and collecting the other half to your balance as usual. This is a simple coin flip game where you’ll try to guess heads or tails. Guessing correctly will double your wager, and guessing incorrectly will have you lose the part of your winnings that you bet.

If you’re the type of player who likes to go big or go home, you’ll get a lot of mileage out of this option, especially for low-level payouts. 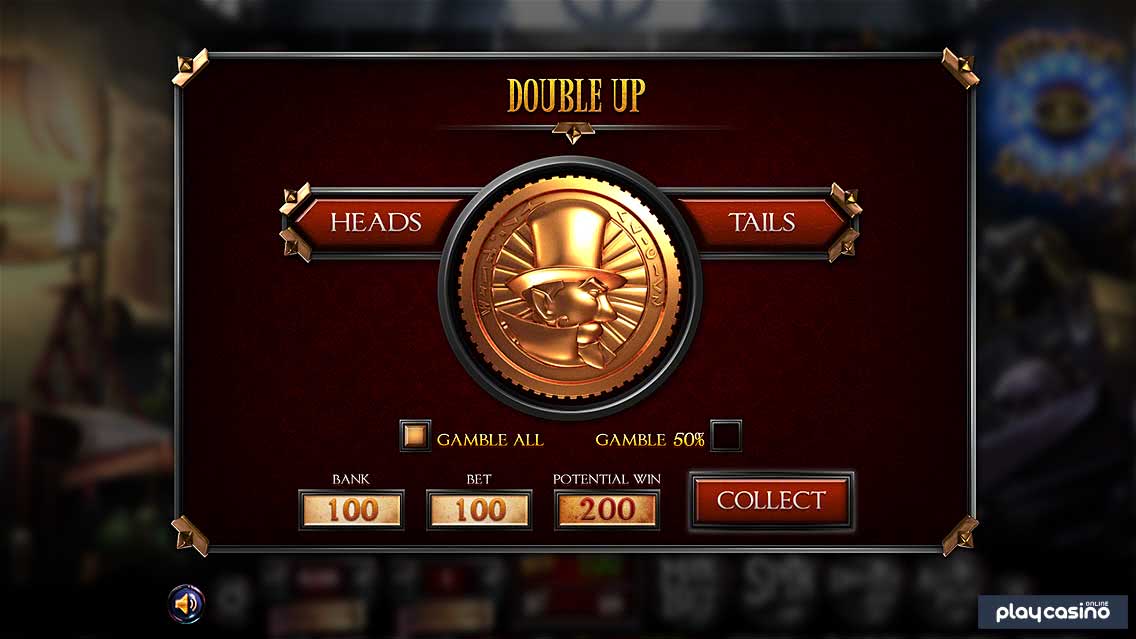 Players tend to be fans of titles that stand out for one reason or another, and the Magic Shoppe video slot by BetSoft manages to stand out in a few different ways. One of those ways is by having a fairly unique theme in the online slot industry, but another is in how the features are handled. There are free spin and wild-based features that can happen over top of one another to provide layers of value, and that’s the type of thing that can make players want to keep coming back to a game like this.