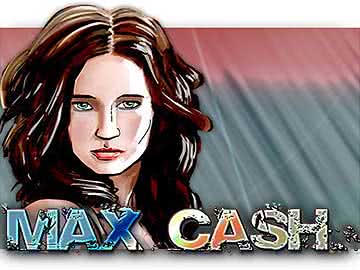 Max Cash is a true crime style online slot by Saucify that offers a balanced pay table with free spins and mulitpliers.

With the Max Cash online slot, you get a graphic novel style of visual presentation combined with a true crime theme that has motorcycles, pipe bombs, evil villains and the hero saving the girl. Everything you could think of from this genre is included here, and that’s one of the reasons why it’s one of Saucify’s more popular titles. The gameplay is based around a simple but effective set of features and a pay table that is balanced enough to be reasonable while still offering up chances for some pretty big payouts and prizes.

Format and Layout of the Max Cash Slot

What you have with this game’s layout is a 50-payline video slot. It uses a format with five reels and four rows, so you get plenty of screen real estate and a lot of ways to win on every spin. Be careful when you first start playing because the game controls for betting may not start off where you want them, and that includes the number of activated paylines. Make sure that stays at 50 so that you get the best RTP available.

As far as bet selection goes, you’ll pick between one and five coins on each of the 50 paylines. Coin sizes go from $0.01 to $0.10 apiece with just a few options available, but when combined with the variation in the number of coins per line, you actually get a pretty reasonable range of bets. The minimum is $0.01, and the maximum is $25, so basically all players are getting bet sizes that will work for them.

There are two Max Cash video slot symbols that we’re going to refer to here. The first is the logo for the game itself, and that’s the wild symbol. It appears on all reels, and it gives you a 2x multiplier on any win that includes at least one. This by itself would be a tremendous amount of value. However, you’ll also get extra chances for more wilds on the fifth reel because they’re stacked four symbols high there. As a consequence, it’s much easier to get five-of-a-kind wins than usual because you can actually cover the entire last reel with wild symbols. Combined with the 2x multiplier, and there’s tremendous value there.

A very important symbol in this game is a mob boss type of figure, and that’s Ivan Dracanov. He’s an older man with a shaved face, a suit and gray hair with an orange pattern background. Five of a kind of this symbol is worth 200 times your total bet size. That comes to the same amount as what a 10,000x line bet jackpot would be, which makes this the largest available win in the whole game.

A four-of-a-kind combination gets you 40x, which is the equivalent of a 2,000x line bet payout, which is also pretty high. Three of a kind is worth just 10 times your overall wager, which is still good at the 500x line bet equivalency level.

Don’t be confused by the Jane Wild symbol. She’s not a wild, but Wild is her last name. She’s a scatter and a bonus symbol in this game, and she gives payouts worth half as much as the Ivan Dracanov scatter. This means five of a kind is worth 100 times your overall bet, which is the same as a 5,000x line bet win, making it the second-largest prize available on a single combination in the entire Max Cash online slot.

Likewise, four of a kind pays 20x, and three of a kind gets you 5x. Each of these are also multiples of your whole bet size.

The Jane Wild scatter gives you lower payouts than the Ivan scatter because it also awards free spins. Five of this symbol gets you 15 free spins, and four will earn 12. A total of nine free spins is yours for three of Jane anywhere on the game’s reels. All of these free spin modes will get you a 2x multiplier on all wins, and this combines with the wild multiplier to result in total multipliers that are worth 4x.

You can also re-trigger this feature with three or more of the Jane Wild scatter anywhere on the game board to add the corresponding number of awarded free turns to your overall total, which adds even more value to what’s already a great feature.

Max Cash and Other Top-tier Payouts

Aside from the two scatter symbols, the best regular-paying symbol is Max Cash himself. He will get you a solid 750x win for five of a kind on an activated payline. There’s another symbol that has him on a motorcycle, and that will earn you 500x. One notch down on the pay table is the comm device that looks a lot like an older slide-style mobile phone, and it gets you 400x for five of a kind.

Another symbol that gets you 400x for five is the pipe bomb that has two minutes on the timer. Along with that, a 300x win is available for five of the man with the binoculars or five of the pistol.

What you’ll notice from all of these symbols is that, aside from the top scatter pays, the rest of the pay table is actually pretty flat and balanced with a whole lot of mid-level wins.

To round out the bottom of the pay table for the Max Cash online slot, you’ll have four different card rank symbols. They have different colors and look to be happening in front of explosions, and they’re very “loud” from the position of font choice since it’s the same font used in the name of the game on the logo symbol.

Five of a kind of the blue A or red K will get you a 50x win. It drops to 30x for five of the purple Q or green J, each of which are tied for the lowest-paying symbols in the game.

With the Max Cash video slot, Saucify has put together a true crime type of environment and experience without taking itself too seriously. A lot of the games in this genre seem like they’re trying to recreate the tone and feel of popular mobster movies, and it doesn’t always work. Instead, this title focuses a bit more on gameplay and giving players lots of ways to get paid with plenty of action, and it uses the theme as more of a backdrop instead of the main focus of the game. Overall, it’s a great part of the Saucify portfolio as a whole, and it shows that you don’t have to get too fancy to produce a game that players will stay with for a long time.