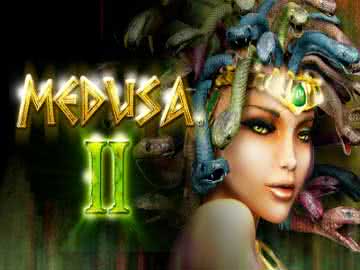 The story of Medusa in Greek mythology is very interesting and sad. She ended up as a monster through no fault of her own, and her hate for the men who would come to try to kill her was fairly justified. In spite of that, she’s known for being a popular monstrous villain from Greek mythology, and the NYX Gaming Group’s Medusa II slot features her in the lead role in the sequel to the original slot by the same name. This is a feature-packed game with a pay table that keeps players engaged with a high hit-rate.

Format and Layout of the Medusa II Slot

There are five reels, like most video slots, in this game. There are also three rows of symbols, and instead of using a traditional payline format, it uses the “all ways” approach. This means that each symbol works as a scatter that has to be lined up from left to right on the reels, so there are a total of 243 ways to win on each individual spin. This means you’re getting a sizable hit-rate right off the bat, but the balanced pay table makes this even more noticable, especially when you see the types of features that are used in this game.

Betting is important to talk about in this game because it doesn’t follow the usual payline approach. Every single spin costs a total of 25 coins, and there is no option to play for any other multiple of those coins. However, you can choose from several different coin sizes starting at $0.01 and going up to the $5 level. All of your wins are listed as a multiple of your total bet size as well, so there’s no confusion on how much you’ll win on any given spin.

One of the key features of this game, and probably the one feature that drives the majority of the gameplay in the regular game of the Medusa II video slot, is the locked reels feature. Between two and five adjacent reels can randomly be selected at the beginning of a spin, and if so, then they will lock together to show the exact same set of symbols. On an all-ways slot, this is huge because it gives you tons of extra ways to hit winning combinations.

To give you an idea of how important this is, if you lock in just two reels, for example, then you only need three matching symbols on the remaining three reels to hit a five-of-a-kind wins. That’s a lot of value just waiting to fall in your lap with this feature.

The Medusa II logo symbol appears on all five reels, and it’s a scatter symbol in this game. You can win for three of these or more anywhere on the game’s reels. A 250x win is yours for five of a kind, and that drops to 125x for four of a kind. You can still win 50x for three of a kind in this symbol, and those are some pretty hefty payouts for scatter wins.

If you’re able to get three or more of the Medusa II logo symbol on the reels, you’ll also pick up a set of 10 free spins for your trouble. Every single one of these 10 free turns will have the locked reels feature activated, so they are worth quite a bit more than the average spin. It’s a pretty big deal to get this feature because of all of the locked reels and the chances to hit many more wins than you would normally.

We should point out that you are able to re-trigger the feature with three or more scatters, and you’ll get five free spins added to your total when this happens.

It’s probably no surprise that Medusa herself is the wild symbol in this game. What’s very important to note as well is that she’s stacked on every one of the five reels. Stacked wilds are a big source of value in this slot because of the 243-ways format, and they can help you to line up several different small- or medium-sized wins along with making it easier to nail the larger five-of-a-kind payouts too. The scatter is the only symbol this wild doesn’t substitute for.

Five of this wild gets you a 500x win, the largest regular payout in the game. Four of a kind is worth 50x, and three is worth 20x. If you get three or four of this symbol, you’ll get chances for larger four-of-a-kind or five-of-a-kind wins as well. You’ll be awarded whichever win is largest on each of the available ways to win in these cases.

If you get Medusa on the reels at any time, you have a random chance of a soldier appearing to try to attack her. Her gaze will petrify the soldier, turning him to stone. In turn, this will switch one reel to be completely full of wild symbols. When this is combined with the wilds that activate the feature, it’s obvious that you get some chances for multiple stacks of wilds on the reels at the same time, which equates to big payout opportunities.

In the Medusa II video slot, you’ll have five symbols that give you a chance to win some pretty significant payouts. The snake crawling through the helmet can get you 400x for five of a kind. You can also win 300x for three of the golden snake emblem, and five of the broken soldier statue earns a 200x payout. The quiver of arrows and bow, known for being the weapon of choice for the titular character, also gets 200x for five, and five of a kind in the golden bracer gets you a 100x win.

Players can also score wins with the five card rank symbols. The purple A, red K, orange Q, blue J and yellow 10 all are stylized with a Greek-themed font, and they all give the same payouts. You can get 50x for five of a kind in any of these five low-end symbols.

Medusa II is one of the most popular online slots available with NYX Gaming’s software because it has tremendous gameplay values and a strong set of features that work together in a way that makes sense. The theme is felt throughout every aspect of the game, and we definitely have an appreciation for the graphics as well. Overall, this is a smooth game with a ton of pros and limited cons, and that’s why it appeals to so may players.