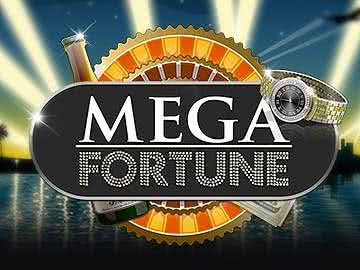 The Mega Fortune progressive slot is NetEnt’s largest progressive game, and it has held the online jackpot world record.

It’s not often that you get a chance to play a game that has broken a world record, but that’s what you’ll get with the Mega Fortune video slot by Net Entertainment. This game has multiple progressive jackpots, the largest of which has paid in the eight-figure range on several occasions. You’ll always have a chance to become a millionaire on any given spin with this game, no matter how much you wager, and that’s why this game is so ridiculously popular among slots fans.

Format and Layout of the Mega Fortune Slot

This progressive jackpot game has a format that’s pretty standard in the video slot world. You’ll find five reels, three rows and 25 paylines here. You’ll be able to bet between one and four coins on each of those paylines, and the coins themselves can be valued from $0.01 to $0.50 apiece. If you max out your bet size, you’ll be wagering $50 per turn. However, you can also wager for as little as $0.25 per spin as well, which makes this game accessible to players at all levels.

Qualifying for the Progressive Jackpots

Something we want to clarify right away for the Mega Fortune video slot is that you do not have to do anything in particular to qualify for a shot at the progressives. You don’t need to use a particular bet size minimum or anything along those lines. Every bet at every level is given a shot at those jackpots.

The only caveat to that is that your chances to win are proportionately tied to how much you wager. What this means is that a bet of $1 will have half the chance of hitting the progressive than a bet of $2. However, betting $1 twice has virtually the same chance of winning as betting $2 once. This means your chances of winning are tied to how much you bet in total and not so much the specific sizes of individual wagers. We think this is a particularly fair way to handle the betting here, and it’s one of the reasons why this game became so popular in the first place since it caters to everyone no matter the stakes they’re comfortable with.

The theme of this game is wealth, and while that makes sense in the context of being able to hit a seven- or eight-figure jackpot on any given spin, it’s also tied into all of the symbols in this game. The yacht is a big symbol of wealth, and it’s the wild symbol in this slot as well.

This symbol shows up on all five reels. It substitutes for everything but the bonus symbol and the scatters. Five of a kind will earn you a payout of 10,000x, which is definitely on the high end. Four earns 1,000x, three gets you 100x, and just two of a kind is worth a 10x win.

The champagne symbol is another important symbol in the Mega Fortune online slot. It gives payouts no matter where it shows up on the reels as long as you get at least two of them. The wins for this scatter are also multiplied by the total bet size instead of acting as a payline wager, and you can multiply them by 25 to get what the equivalent would be if it was paid based on the lines like all of the other regular-paying symbols.

Five of a kind pays a whooping 100x, which is like a 2,500x line bet win. Payouts of 10x, 3x and 2x are yours for four, three and two of a kind, respectively. These are decent payouts for a scatter, especially considering the size of the other prizes in this game.

A good source of value in this game is the free spins bonus feature. The way it works is that you’ll need three or more scattered champagne symbols anywhere on the reels to start the feature. When you do this, you’ll be given a set of free spins. Getting two or more scatters during the free spins gives you additional free turns or adds to the multiplier, at random.

You’ll have a multiplier shown to the side during your free spins, and all of your non-progressive payouts are multiplied by this amount as a result.

When you get three of the bonus symbols from left to right, you’ll activate the bonus feature. This is based on a series of wheels. You start with the outside circle. You can win 100x, 200x or 300x right away and end the feature, or you can proceed to the next layer. The second layer can award the Rapid jackpot or wins ranging from 300x to 700x.

You can make it to the third level as well where payouts ranging from 2,500x to 7,500x can be won, and the Major jackpot can be picked up here too. If you get the arrow symbol on that circle, then you get the Mega Jackpot, the largest payout available in the game and inside of the entire Net Entertainment portfolio of slots.

As if there weren’t enough ways to win sizable prizes in the Mega Fortune video slot, the top tier of regular payouts is pretty solid as well. Five of a kind of the limo symbol is worth a 1,000x win. You can get payouts for two of a kind or more of this symbol, but all of the rest of the regular-paying symbols need at least three.

The money clip that’s in gold with diamonds in it pays 500x for five of a kind. You can also earn a 300x win with five of the expensive watch. Five of the glass with the cigar pays 200x, and you can see that these mid-level wins are pretty balanced considering the overwhelming volatility of this game as a whole.

Net Entertainment handled four different card rank symbols in a very smart way in the Mega Fortune online slot. They are each very expensive rings. The golden ring with the green A pays 150x for five, and the silver ring with the yellow K gets you 125x when you line up five on an activated payline.

Rounding out the bottom of the pay table is the gold ring with the blue Q and the silver ring with the red J. They pay 100x and 75x for five-of-a-kind combinations, respectively.

Net Entertainment’s Mega Fortune progressive slot is one of the most popular games ever released in the online slot world as a whole. It previously broke the world record for the largest online jackpot to ever be won, and players are very aware of the fact that they could become an instant millionaire on any given spin when they play.