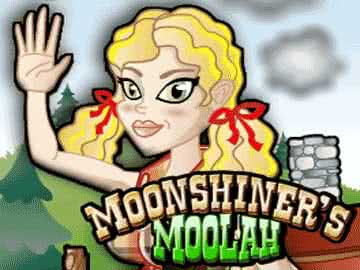 The Moonshiner’s Moolah slot by Rival Gaming is about a group of people who make moonshine with 20 paylines, crazy chickens and multiple bonus features.

During the prohibition of alcohol in the United States several decades ago, there were moonshiners who made their own alcohol from corn and sold it on the black market. The Moonshiner’s Moolah slot by Rival Gaming is centered around this type of theme, but it doesn’t use a super-serious, true crime type of approach. Instead, it focuses on the hillbillies that were known for making and running this type of liquor in a fun way that gives you a cartoony style of graphics. The gameplay has a medium volatility with a good balance between the bonus features and regular pay table as well, so they give players a good experience all-around.

Format and Layout of the Moonshiner’s Moolah Slot

A pretty standard layout is used in this game. There are five reels with three rows of symbols and a total of 20 paylines available. Players can set the number of lines anywhere they want from one to 20, but we have to strongly recommend that you keep it at the maximum. The return to player percentage is maximized at this level, and choosing fewer than 20 will lower it, which is completely unnecessary for any reason.

In terms of selecting your bet size, you get two other controls that allow you to do that. The first is the size of the coins themselves, and you can pick from a few different sizes that start out at the $0.01 level and that run up to $0.25 apiece. Players can also pick to bet one coin on each payline or up to as many as 10 per payline, and when combined with the coin size options, that puts the total betting range at $0.20 to $50 per spin. That’s particularly wide, and it makes it really easy to pick out exactly the bet size you need to feel comfortable.

In the Moonshiner’s Moolah video slot, there’s a wild symbol that appears on the very first reel (farthest to the left) only. It’s a blonde-haired woman, and she has on a striped orange and black shirt. She is an expanding wild, and she helps to get you extra payouts. She doesn’t count for the scatter, but she also doesn’t remove any scatters she covers up from counting towards their bonuses and payouts. This expanding wild on the first reel makes it much easier to hit winning combinations in general, but it also makes it easier to get several small or medium wins on the same spin, which lowers the volatility and ups the hit-rate.

The grandpa of the family has on a brown hat, and he has a big, white beard. Whenever you get three or more of him anywhere on the reels, you’re taken to the Bottle Bonus feature. This bonus works by giving you picks between a number of different bottles of moonshine liquor. If you pick right, you’ll get huge wins worth several times your total bet. Even your worst possible win from this feature is pretty good, and we like how Rival Gaming gave this particular bonus feature some real meaning by tying it into the theme of the slot.

In the Moonshiner’s Moolah online slot, players will see an absolutely hilarious chicken symbol on each of the five reels. When you pick up three or more of this scattered bonus symbol anywhere on the game’s grid, you’ll get a shot at the Chicken Shoot bonus round. The way this works is that you’ll get free chances to shoot at chickens. It’s actually random as to whether you hit them or not, but it’s a funny bonus feature if you aren’t overly sensitive about harm being done to virtual animals. You get instant wins in this feature as well, but it’s a fun way to spice things up and add some flavor to the game and its bonus rounds.

Other Top-Level Symbols and Wins

Four other symbols round out the top level of the payouts, but no symbols other than the granny uses just two of a kind for a win. You’ll need at least three on an activated payline from left-to-right to score with any of the following symbols.

It starts with the hound dog, and he’ll get you a great 500x payout when you get five of a kind. Five of the house earns 350x, and that win drops just slightly to 250x when you line up five of the tractor. Five of a kind of the truck will get you a win of 175x. All of these payouts are pretty balanced, so you have plenty of ways to win large, medium and small wins. This balance in the pay table is what’s largely responsible for the low volatility in the game as a whole.

The Moonshiner’s Moolah video slot has four other paying symbols. The jug of liquor gets you 100x when you get five of them on a line. Five of the shotgun pays 80x for five-of-a-kind combinations as well. You can get 60x for five of the banjo, and a 40x win is available for five of the spit jug. In case you’re wondering what a spit jug is, it’s a jug that sits on the ground that you spit tobacco spit into when you chew or dip tobacco. This makes for an easy cleanup instead of spitting it all over the porch, beside the living room recliner, etc.

With the Moonshiner’s Moolah video slot, you get a humorous take on a particular type of theme that’s often treated with a higher level of seriousness. By avoiding the trap of taking themselves too seriously, Rival Gaming has focused on gameplay and fun features instead, which has boosted the popularity of this game substantially compared to titles of similar themes from other software companies. With its high hit-rate approach to gameplay and its fun style of animation, this game has been a hit among players with a steady level of popularity that’s been maintained over time.