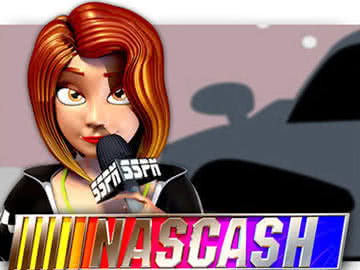 Nascash is a 25-payline video slot by Saucify that’s based on a Nascar stock car racing theme with 3D graphics and three free spins features.

Stock car racing is extremely popular in the United States, and Nascar is the most popular association for it. The Nascash video slot by Saucify is based on this organization and its racing, and it may be the only video slot by a top software developer that focuses on this specific type of racing, which is one of the most popular in the world. The graphics in this game are outstanding with a 3D rendered approach, and there was definitely no point in the process of building this game where the developers decided to be lazy.

The layout of the Nascash slot machine is very solid. It’s essentially a 25-payline video slot with five reels and three rows of action. The betting is set up around picking a coin size that varies from $0.01 to $0.10 for each of the individual paylines. However, you can also multiply your wager by up to a factor of 10 by betting between one and ten coins per payline, which gives you a whole lot of control over picking out the precise amount you want to put up on each spin.

The volatility of this game is also pretty high. It comes primarily from the top jackpots making the pay table very top-heavy and the value-packed bonus feature. If this isn’t your preferred type of gameplay, then you can minimize the effects of it by choosing a smaller bet size than you usually take and playing sessions that last longer than you normally do.

One of the biggest things that stands out about the Nascash slot is that there are three different free spins bonus features that you can earn, and they all come from the same scatter. There is a symbol showing the race in progress, and it has a red number 9 car out in front. This is the scatter symbol in this game, and if you get three or more anywhere on the reels after a spin, then you’ll activate one of the three free spin rounds.

The Slingshot Free Spins feature comes if you get three of this symbol. This feature gives you three free turns, and all of your wins are hit with a 3x multiplier. You can also earn the Overdrive Free Spins feature for four of a kind of these scatters anywhere on the reels, and that gives six free spins with a 4x multiplier on all of your payouts. The best of the three modes is the Nightride Free Spin feature, and it pays a whooping 15 free spins with a 2x multiplier.

There is a drive who shows up on the reels, and he’s the wild symbol. Unlike a lot of online slots out there, there aren’t any special payouts for just the wild symbols. With that being the case, he still shows up on every reel, and he’ll help you to get extra payouts. Because this game’s pay table is so top-heavy, he’s a pretty value-packed symbol, and the only symbol he will not substitute for is the scattered race scene. In spite of that, he’s definitely one of the main symbols that you’ll be happy to see on the reels.

Something that players will absolutely love about the Nascash slot machine is that it has some pretty huge jackpots. The woman reporter for the fake SSPN news channel is the top-paying symbol in this game, and five of a kind will give you a tremendous 10,000x jackpot. Four of a kind still gets 1,000x, which is larger than the top wins for a whole lot of games out there today. You can win 100x for three or 6x for two as well.

Next up is the silver trophy cup, and that’s what all of the drivers are shooting for. Five of a kind gets a pretty incredible 8,000x payout, and four will still get you 800x. You can earn a win worth 80x for three of a kind, and just two will earn 4x your line bet wager.

The third-largest jackpot in the game is 2,500x, and you get that when you line up five of the red number 9 race car on the same payline. It’s pretty incredible that a win worth 2,500x isn’t one of the two top payouts in the game, but that just goes to show how jackpot-heavy this game is. Four of a kind is worth 250x, three gets 50x and just two will still pay a 3x prize.

This game has a good selection of mid-range payouts as well. The checkered flags and red driving helmet pay 500x and 400x, respectively, for five of a kind. Each of these two symbols, just like the three jackpot symbols noted above, pay for two of a kind or more. The rest of the six symbols in this game pay for just three of a kind or more.

This includes the racing tires symbol. Five of this symbol will get you a 300x win. Other mid-tier wins include five of a kind of the fire extinguisher for 250x or five of the oil can for 200x. These wins are pretty solid, especially considering there are so many of them, and the pay table doesn’t really drop off that much considering how large the top pays are in the game.

With the Nascash slot, Saucify didn’t get lazy and pick card rank symbols for the bottom-end pays. Instead, this tier starts with the radar gun, which pays 150x for five of a kind. The number 9 team hat pays out 125x, and it’s worth noting that the colors used here look a lot like Dale Earnhardt, a driver who would have died from an accident on the track around the time the game was made. We’re not sure if that’s intentional, but it’s worth pointing out. Finally, there is the beer and hot dog combination, which is probably the most popular meal when at the track, and it pays 100x for five.

You’ll notice that even the low-end symbols pay at least 100x for five of a kind, and that avoids situations like what you find with some other games where lower five-of-a-kind payouts can be ridiculously low like 20x or so, which is always disappointing to players.

Saucify’s Nascash slot managed to do something that hasn’t really been done in the industry since, and that’s to create a stock car racing game. It’s actually one of the best racing-themed games out there overall, which is an impressive feat in and of itself, and it has a ton to offer players. The graphics are very strong, and so is the gameplay, and that’s a combination that almost always guarantees a popular game, which is definitely the case here.