Ned and His Friends Slot Review 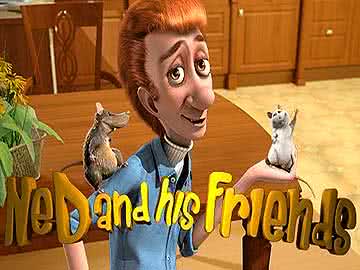 The Ned and His Friends online slot centers around a man named Ned who hangs out with a bunch of crazy rats at his home. There are 30 paylines of action with a singing rats feature with free spins, another with instant wins and a rat tail feature.

A man who lives with a bunch of singing rats might seem like a really strange premise for an online slot, but it works really well with the Ned and His Friends video slot by BetSoft. As a part of the Slots3 series, it has excellent 3D graphics with multiple characters and some hilarious rats. On top of that, the gameplay offers a good balance between a value-packed pay table and some fun features that tie into the theme of the game really well. It’s an atypical concept for sure, but this developer has made it work out in a really fun way.

Play Ned and His Friends Slot for Free

Format and Layout of the Ned and His Friends Slot

The format of a game in the slot genre can drastically impact the gameplay. What BetSoft did with this title is use 30 paylines, which is important because it offers several ways to get paid on each spin to provide players with a lot of action. However, it’s not so many that you just get lost in how many lines are available. Five reels and three rows make up the typical grid, but it’s important to keep the paylines at 30 so that your RTP percentage doesn’t drop below the available maximum. 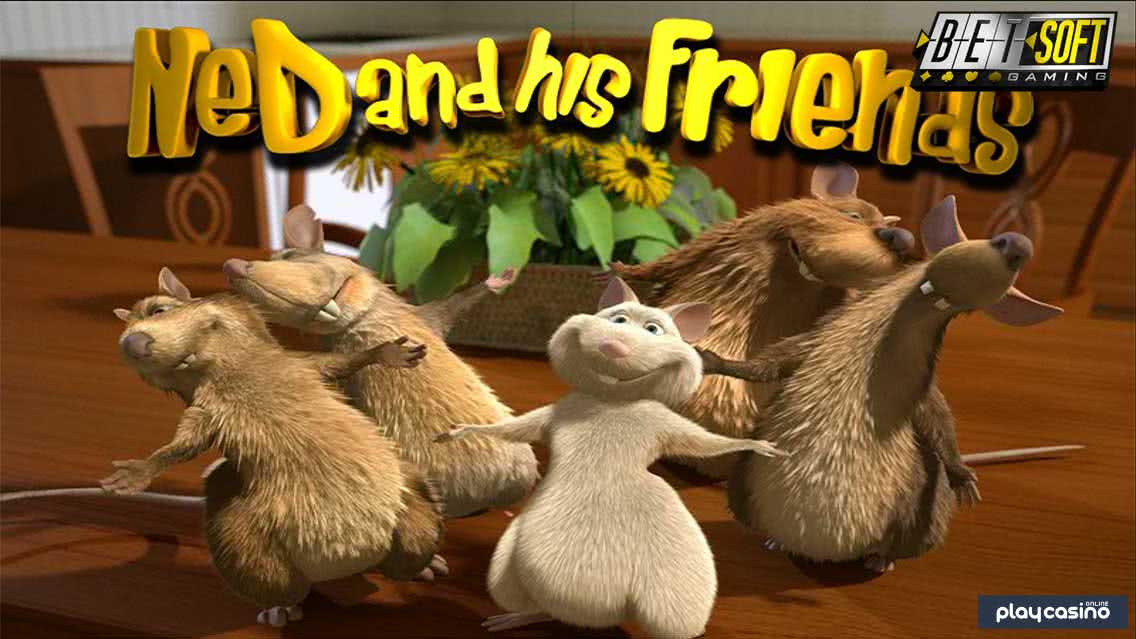 To make it easy for players to pick out bet sizes that are as close as reasonably possible to exactly what they would prefer, this game has two different options for changing how much you’re wagering. You can pick coins that go from $0.01 to $1 apiece, but you can also wager up to five coins on each line for a maximum bet of 150 coins per spin. This means you can wager almost anywhere from $0.30 up to $150, which is a tremendous range that is super flexible to allow as many players as possible to comfortably play this game relative to their particular comfort level for bankroll management. 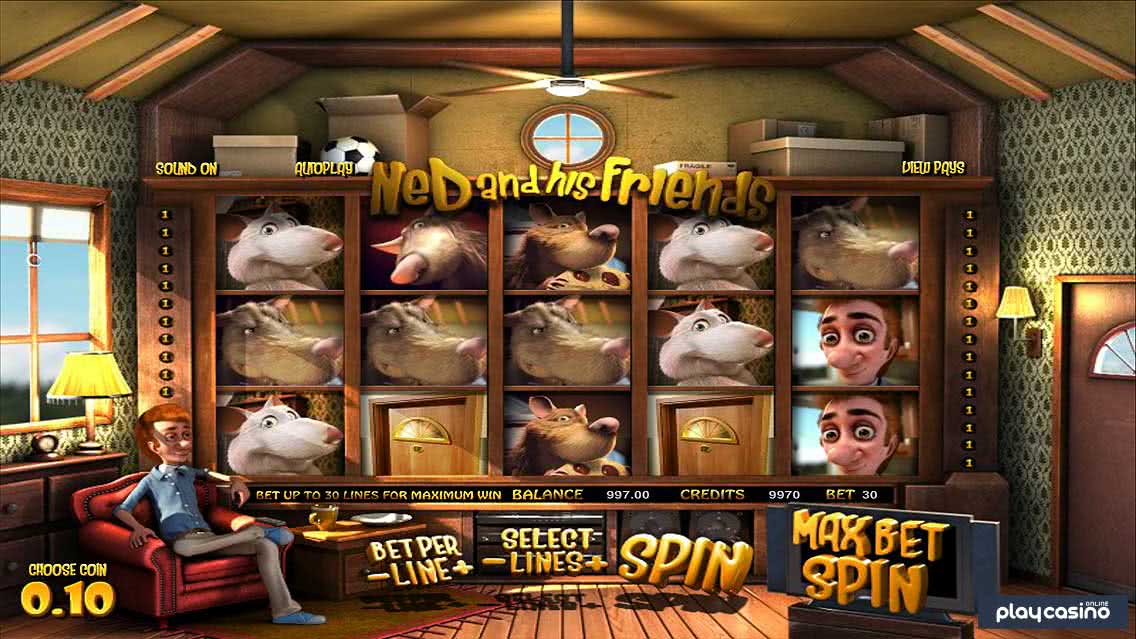 What’s probably the funniest thing about the Ned and His Friends online slot is that it’s largely about a bunch of singing rats. They look either cute or hilarious, depending on your predisposition, but if you get three or more of the rats symbol on the reels at the same time anywhere on the game board, then you’ll trigger a set of free spins with these little critters. They’ll come out to dance and sing, and if you get more of these symbols on the reels during this feature, then you can add even more free spins to your total, which means more chances to win. 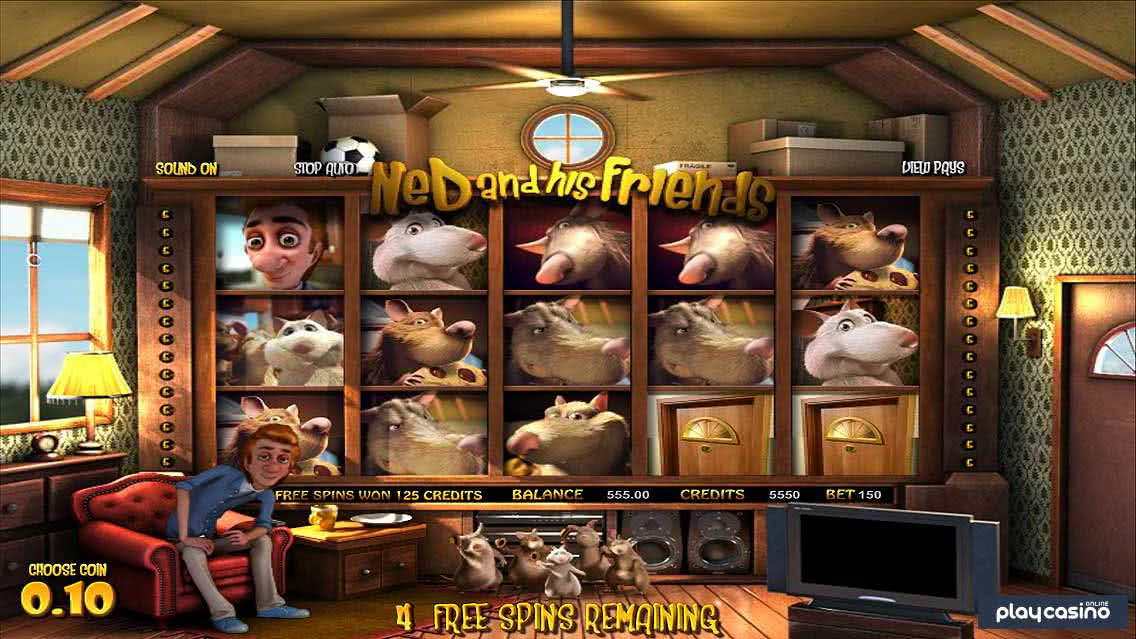 Another feature in the Ned and His Friends video slot is based on having some different holes in the wall that the rats run in and out of. If you’ve seen any movies or cartoons about mice or rats, then you know exactly what we’re talking about. There’s a symbol that shows up on the reels that is a rat tail coming out of a hole in the wall like this, and that’s the symbol that triggers the pick me feature.

When you get at least three of them anywhere on the reels, then this feature is activated. The way it works is that you’ll need to pick between the different holes on the reels to try to pick correctly to get the biggest instant win you can. The better your pick, which is completely random, the better your payout. However, you’re guaranteed a win no matter which one you choose, so it’s a win-win situation in the grand scheme of things. 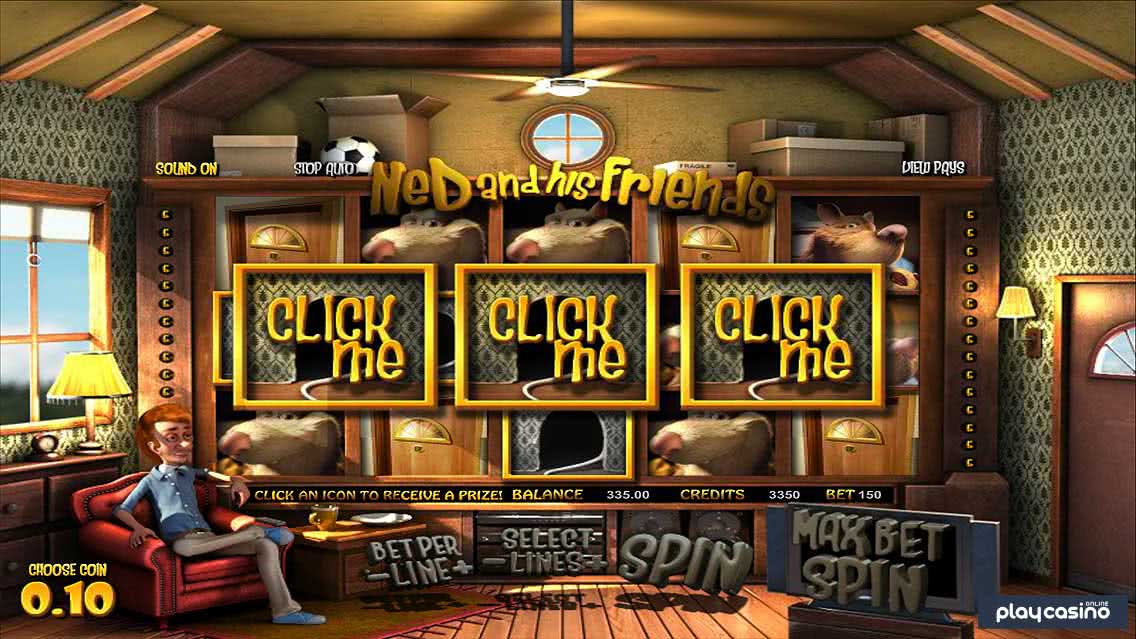 One of the really funny things about the overall story being told here is that the rats are all trying to hide from Ned’s girlfriend. However, she eventually sees them when you get three of the girlfriend scatter symbol (the girl with the black hair). When that happens, she screams and passes out, and she rats decide that would be an amazing time to just start singing.

They will sing until she wakes up, and the longer she’s out, the more wins you get. This is a pretty funny feature in a way, but there’s a morbid slant to it in the way of dark humor. You definitely won’t see something like this from most other games, and that’s the kind of thing that pushes this title so over the top. 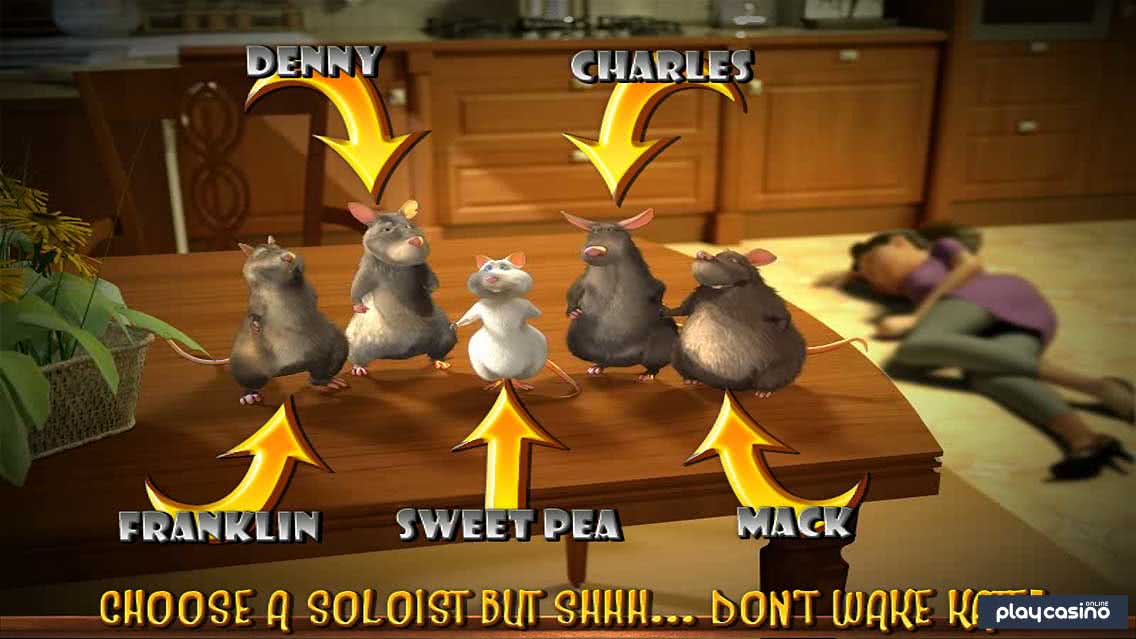 The way the symbol set of the Ned and His Friends online slot is broken up can make it a little tricky to remember the entire pay table for players who like to do so. While there are only seven paying symbols overall, which is excellent in terms of helping to generate a very high hit-rate and a more moderate volatility, the fact that there are five different rats on the reels that make up the majority of the symbols can make things tricky to remember.

Ned himself is the highest paying symbol. You can win 500x when you get five of this poor guy on a payline. Next up is the white rat for 300x with five of a kind, and it’s the easiest to remember. From there, things get a little more difficult. The rat looking at the screen with his head tilted and something red in the background awards players 250x, and five of a kind of the rat eating some cheese will get you 200x. All four of these symbols get payouts for two of a kind or more, which also increases the hit-rate. The rest need at least three for a payout.

From there, there are three other symbols, two of which are rats. The rat that looks a bit fed up and is looking over to the right pays 150x for five, which is still a solid, mid-level prize for five of a kind. You can score 100x for five of the smiling rat looking to the left, and the door symbol gets players 50x when five of a kind are lined up on a payline. 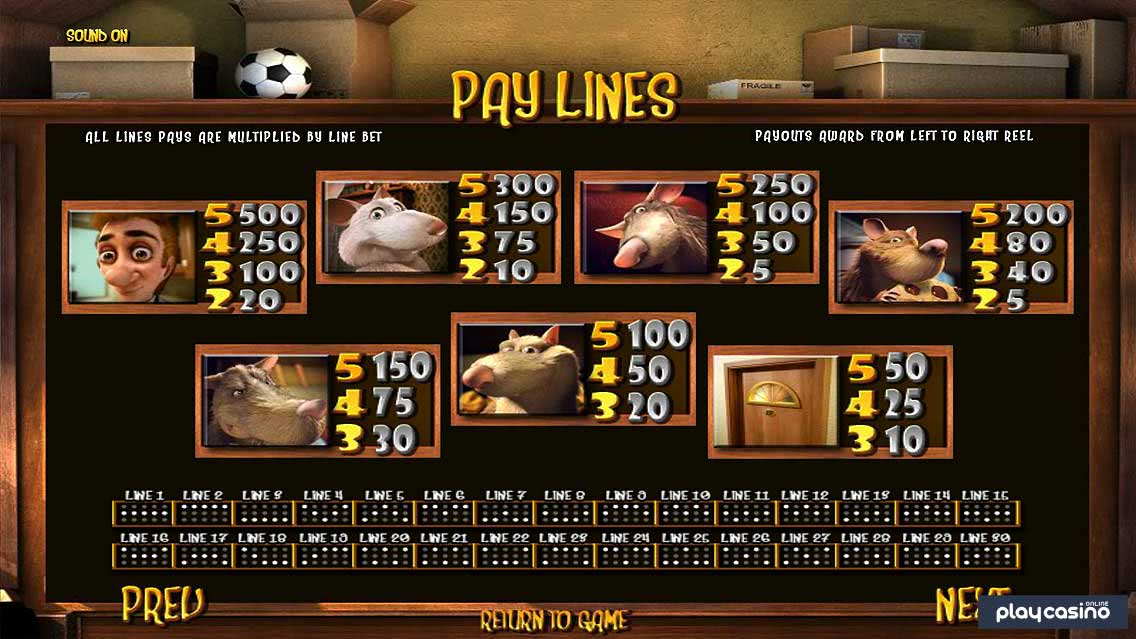 There’s no way to deny that this game shows a lot of BetSoft’s creativity considering they turned the premise of a guy who has a rat infestation into something hilarious and fun. With the Ned and His Friends video slot, there are some fun features that play into this idea, and you even get to see other characters developed like Ned’s girlfriend. We feel like BetSoft could have turned this into a sort of ongoing franchise if they wanted because it’s a concept that has so much depth that could be mined for features and gameplay ideas.