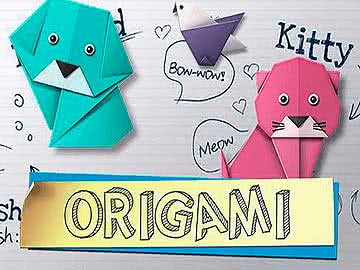 The Origami online slot is a game produced by Endorphina that includes a variety of folded paper shapes in bright, bold colors. This game has 10 paylines and chances to get multipliers worth up to 50x for very large payouts.

The Origami video slot by Endorphina is based around the paper folding art by the same name. It’s known as a meditative exercise for a lot of people, and this software developer has largely caught that experience in this game along the same lines by offering a very relaxing gameplay style with a particularly low volatility. The features are simple, but they still give players a lot of ways to get paid with a high degree of seriousness. We really like how they went out of the box with this game’s overall concept, and we are particularly fond of the animals and other colorful shapes used in the visual presentation of this game.

Format and Layout of the Origami Slot

To promote a style of play that centers around relaxation, this game has just 10 paylines spread across the usual grid of five reels and three rows. You’ll see the numbers one through ten listed vertically along the sides of the reels, and hovering the mouse over any of these will illustrate that particular payline with a line across the reels. However, you can also click or tap these numbers to turn on or off certain numbers of paylines. We strongly recommend that you refrain from doing this, however, since playing with nine or fewer paylines in this game will give you a lower average payout rate over time. 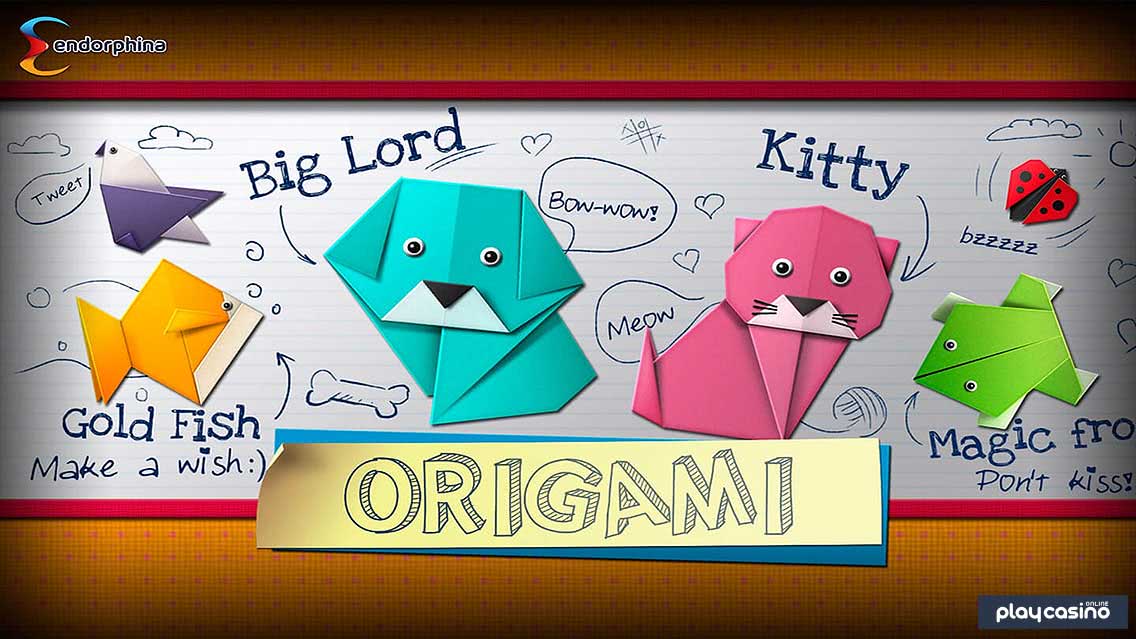 To keep the betting as simple and straightforward as possible, there are just two controls that you need to know about to adjust how much you’re wagering on any given spin. The first of these is in the bottom-left corner where you can choose your total bet, and this number is listed as the total number of coins per wager. You can bet up to 100 coins per spin, which comes to 10 coins on each payline. In the top-left corner, you can click the coin to pick from a few different coin sizes that go from $0.01 at the low end to $1 at the upper end. The total betting range from this is $0.10 to $100 per turn, assuming all paylines are activated (which they should be). 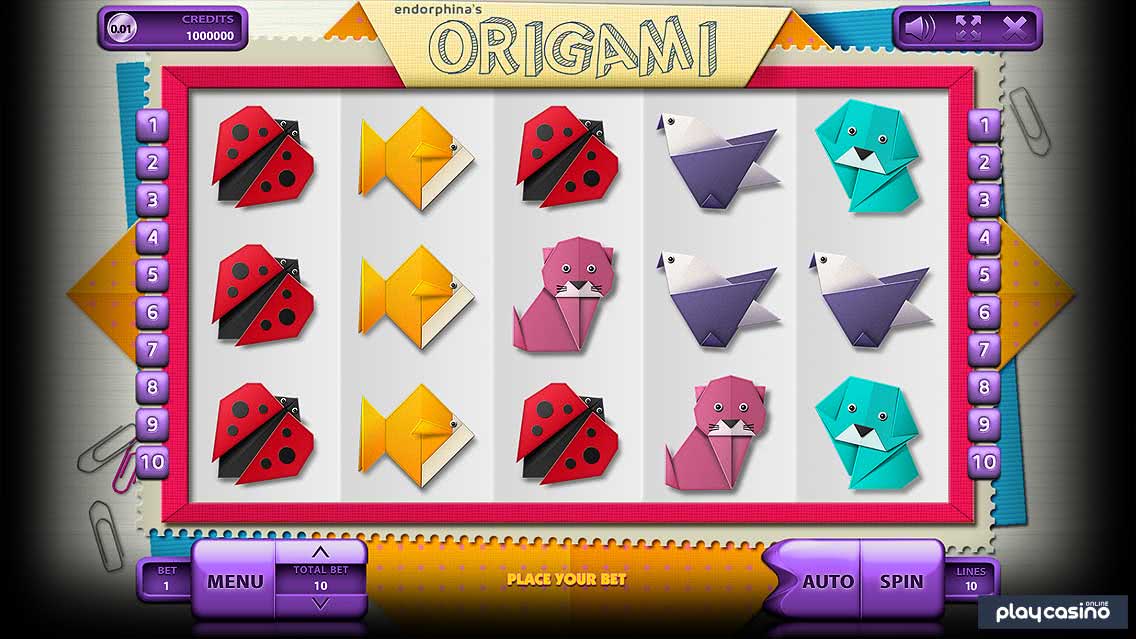 A Note on the Gameplay Style

We really feel the need to point out that the Origami online slot is all about a particularly low-volatility type of play. There aren’t a ton of big features, and there aren’t a lot of shiny bells and whistles to keep you distracted. Instead, they have put beautiful graphics in front of you with a theme based around relaxation and just enjoying value that comes mostly from the regular pay table. They freely admit that this style of play is not for everyone, but it does target a specific sub-genre withing the video slots industry, and within that sub-genre, this game is a hit. We just want players to be aware of the somewhat niche nature of this game, but necessarily don’t be turned off if you prefer games with big jackpots and lots of features because it has a hidden trick that can really build excitement once you realize the implications.

There’s an orange origami cat that’s quite possibly the most important symbol in this game overall. This is because it’s tied to the multiplier feature. The way this feature works is that this symbol can appear anywhere on the game board to give you a random multiplier worth as much as 50x. This is an absolutely enormous multiplier that’s bigger than virtually anything we’ve ever seen in the industry before, and it’s the feature that the entire game is built around. We can’t really argue with that considering the enormous size overall.

With that having been said, it will only apply to winning combinations that show up on that particular spin, and it does not carry over to future spins at all. Even still, you can end up with some tremendous payouts in the Origami video slotthanks to this feature, and that’s quite a feat considering how low the overall volatility is for this game and the resulting play style that comes from it. 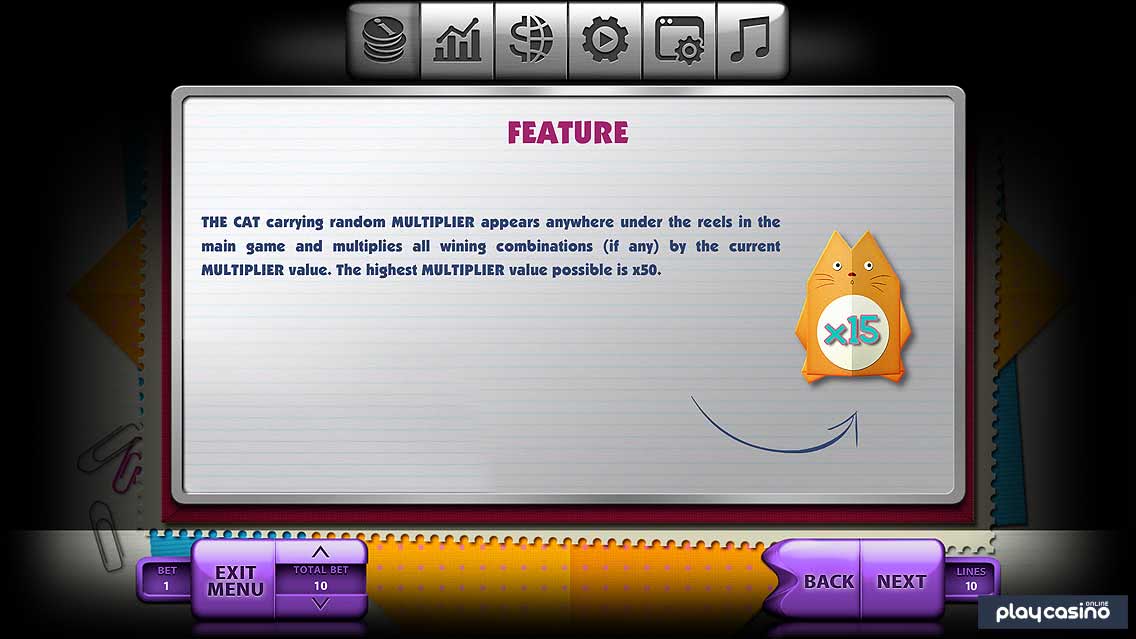 Following in the path of classic slots and many other types of casino games, there’s a double up risk feature available after any payout. The way this works is that you’ll have a chance to collect your winnings or risk your prize in a double-or-nothing mini game based on drawing a card higher or lower than what the dealer draws. You should play this game only if the dealer’s card shows a five or lower. A six, seven or eight gives an even money bet, and playing with a nine or higher puts you at a disadvantage.

To get the highest RTP possible in the Origami online slot, you should take a look at this game every time you win and play if you’re facing a five or lower. If it’s a nine or higher, you should decline to play. For a six, seven or eight, you can play or not with no penalty since it’s an even money bet. 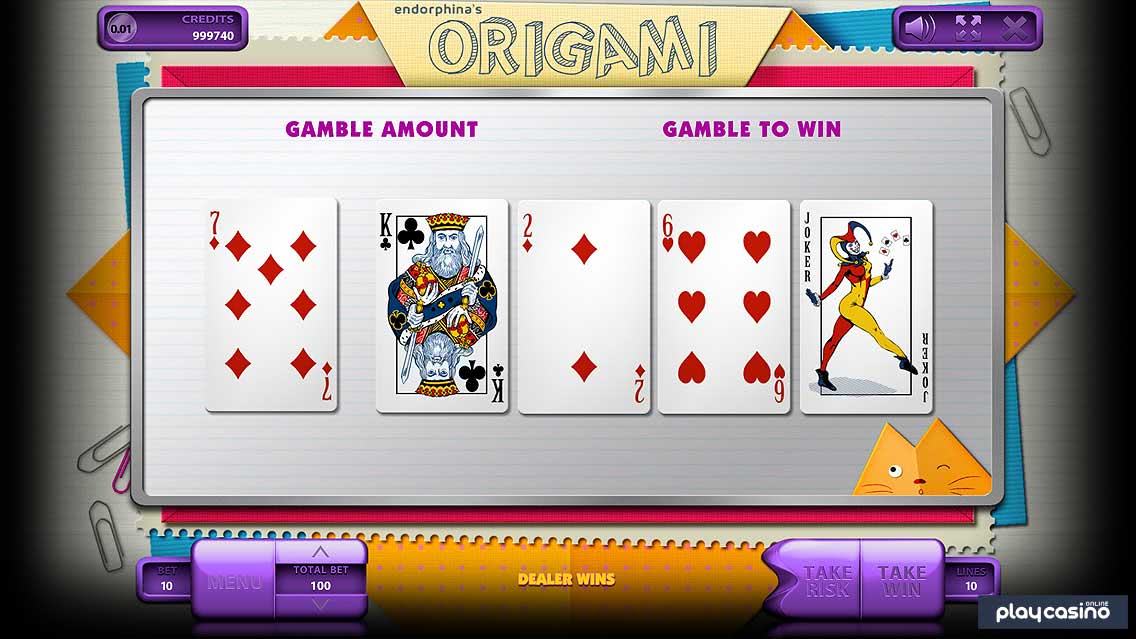 The multi-colored pinwheel is the highest-paying symbol in this slot. Five of a kind is worth 500x without a multiplier and as much as 25,000x with a multiplier. That’s not a small prize, obviously. The big, blue lion gets you 300x for five, as does five of the salmon-colored cat symbol. You can also take down wins of 200x for five of a kind of the purple and white bird or of the gold and white goldfish. the ladybug and frog symbols each get you 100x for five on a given payline.

What you have to realize about this game is that the spread on the base prizes is not that large. It goes from 100x at the low end to 500x at the high end for five-of-a-kind combinations. However, when you factor in the potential multipliers worth up to 50x that come from the cat symbol, this game gets a whole new level of seriousness, which is woven perfectly into how relaxing it is overall. 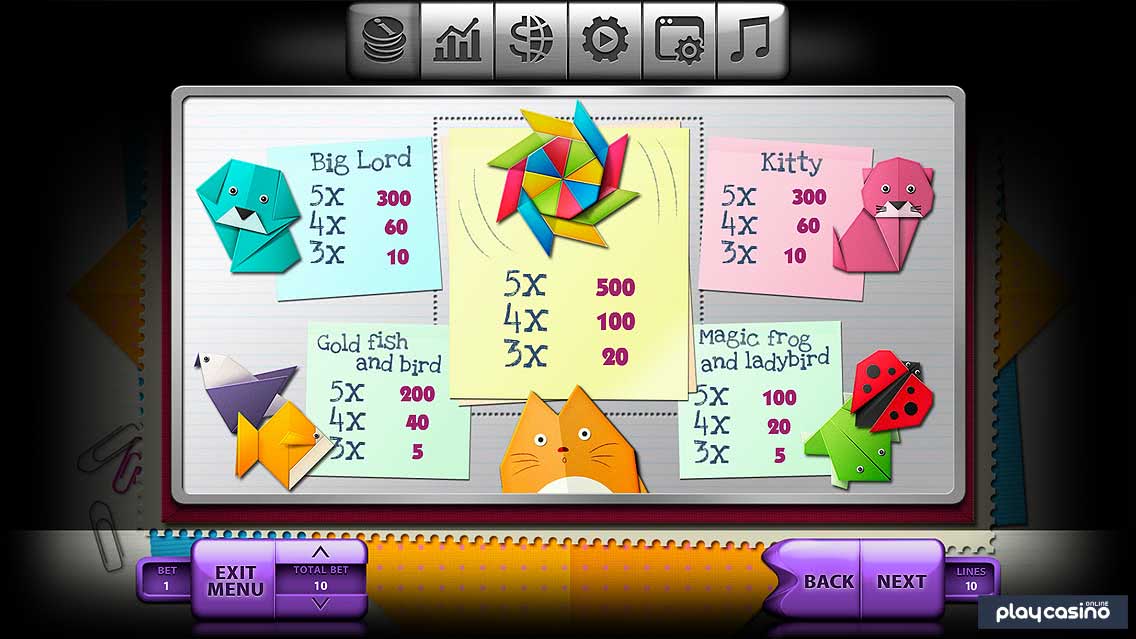 What we really like about the Origami online slot is that Endorphina has used a pretty simple idea as the basis for the game that hasn’t actually been used much in the online slot world overall. In fact, we can’t think of another game based on a paper-folding theme. The gameplay matches the relaxing and sometimes meditative experience of performing the paper folding, but it still uses features in a smart way to retain some chances to win some pretty large payouts.